This healthy vegan french toast recipe is packed with flavor and made with only 7 simple ingredients. Crusted with coconut and quinoa for added crunch! 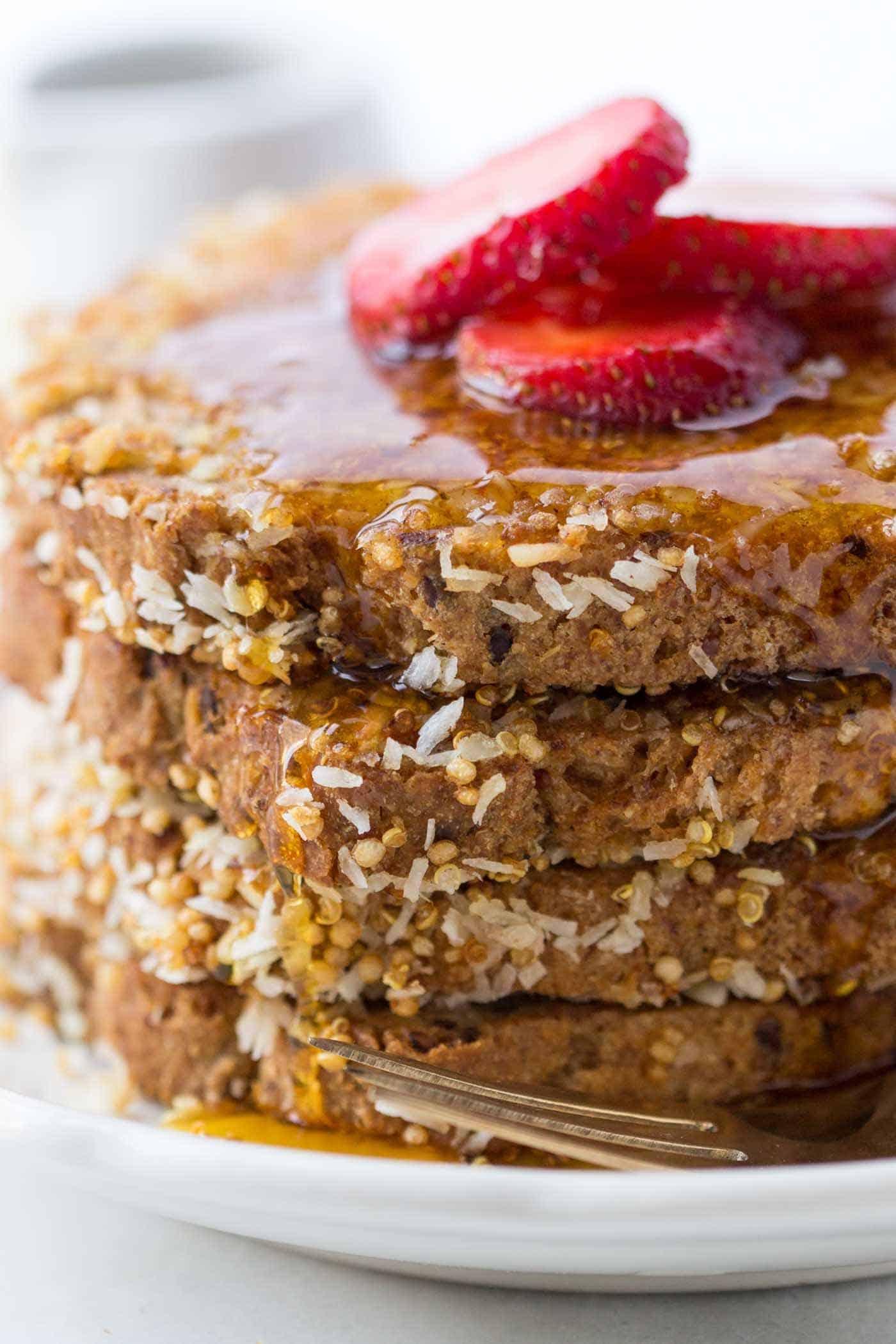 Do you ever wake up in the morning and have a major hankering for an over-the-top, totally decadent breakfast?

It happens to me most Sundays and while I don't usually indulge, mostly out of laziness, when an idea like this one comes it's impossible to let it go. Vegan French Toast coated in coconut and quinoa.

Pretty much the most epic breakfast ever. What's makes it even better (as if that was actually possible)? It's simple AND healthy! 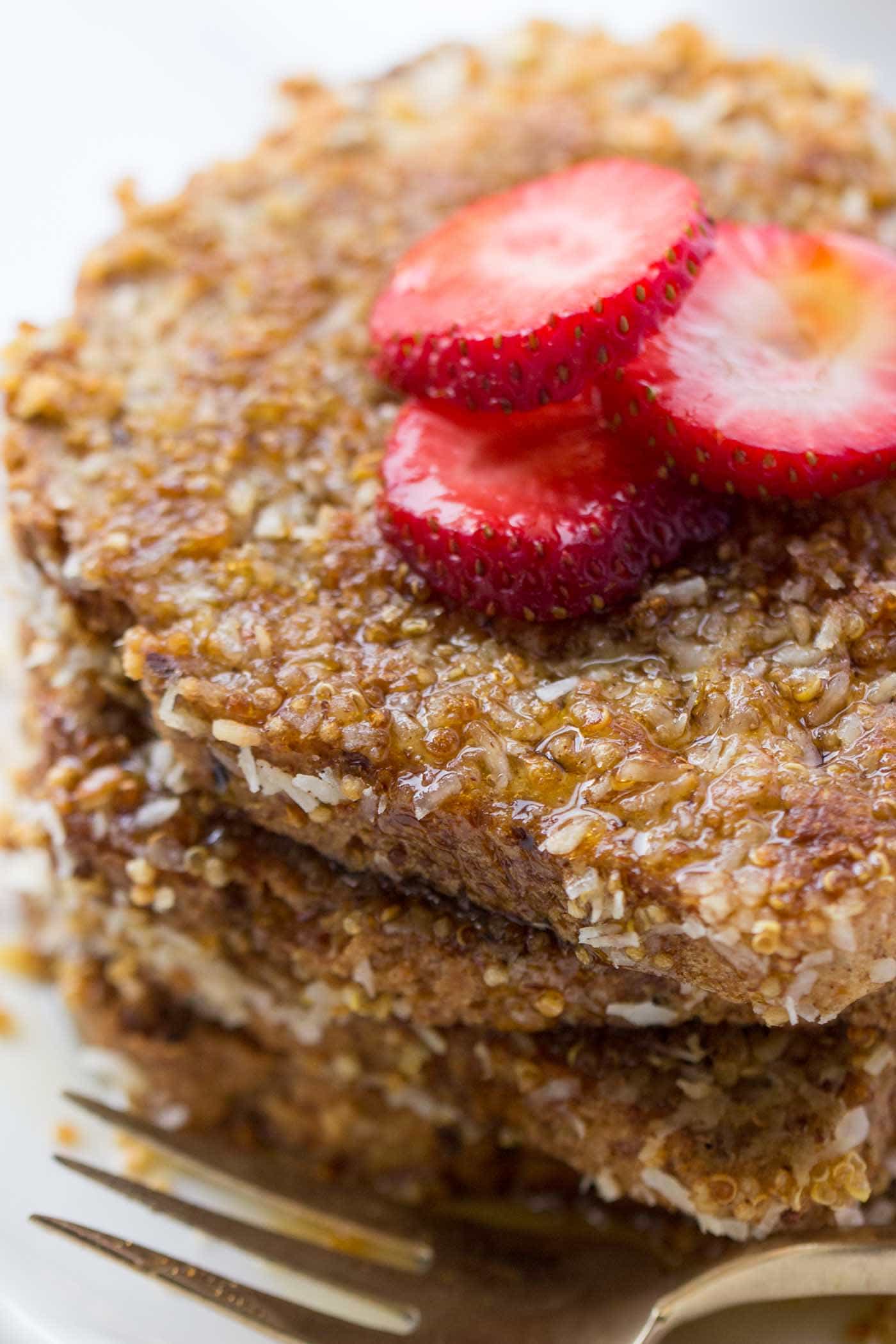 Making vegan french toast is actually way easier than I imagined. Really you just have to replace the egg (and the milk) and so I turned to my trusty vegan egg replacer: flax.

You know from my other vegan baked goods, I love using flax as a replacer for eggs. Not only does it help bind ingredients together as an egg does, it's also incredibly nutritious. Packed with omega-3s, fiber and protein, flaxseed meal is amazing.

So to make our batter you start with your plant milk (I used coconut since we're making coconut crusted french toast) and then you just whisk in your flax and cinnamon. Let it sit to thicken and that's it. Yep, it's really that simple. Hard to believe, huh? 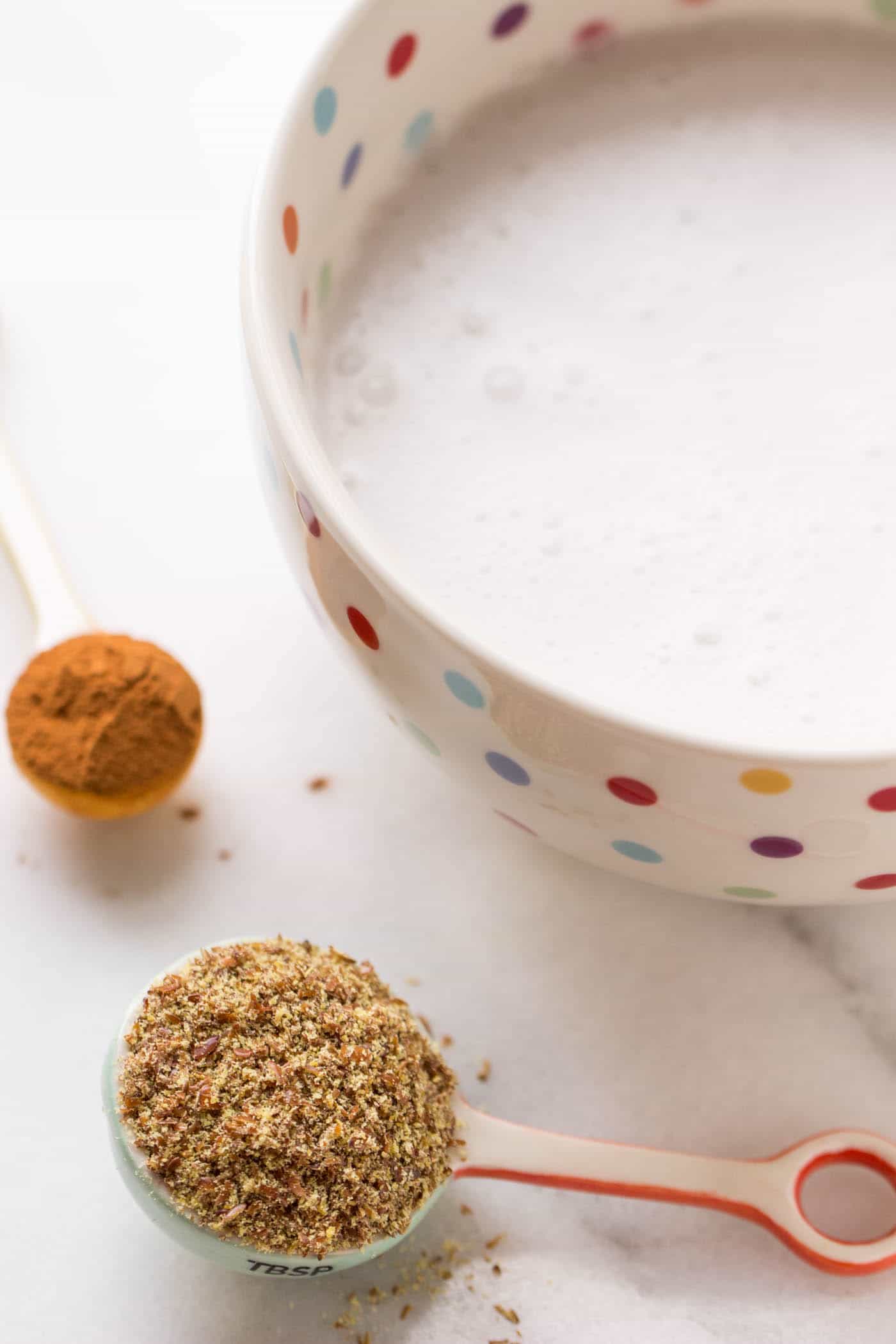 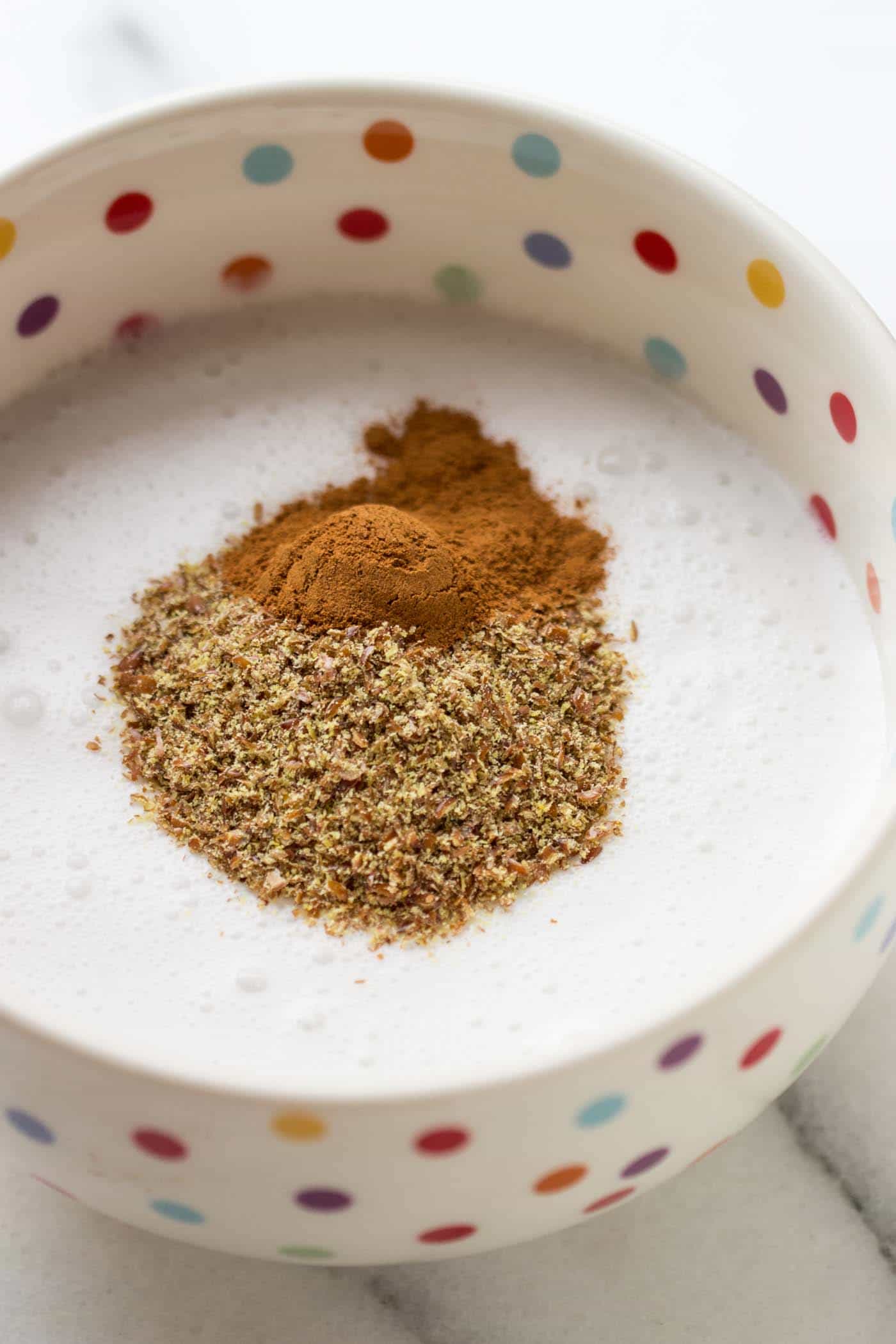 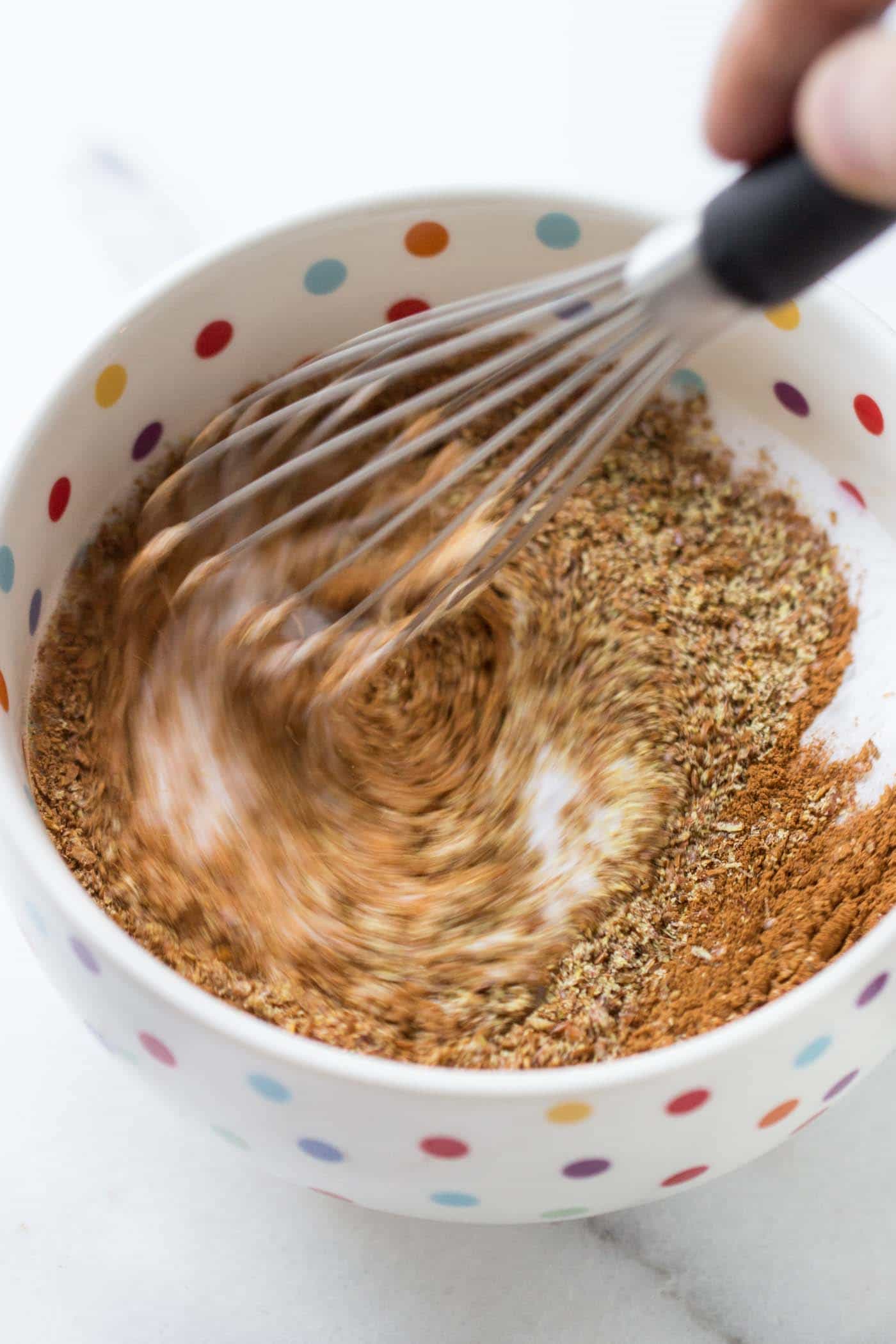 Now you could just leave it at that. Dip your bread, cook it up and enjoy….but we're going to have a little fun this morning. You in?

Instead of just regular french toast, I thought it be tasty to give it a little crust. Coconut is a natural ingredient to use in crusts, but to give this recipe even more crunch I added in my fave ingredient of all time: quinoa crispies. 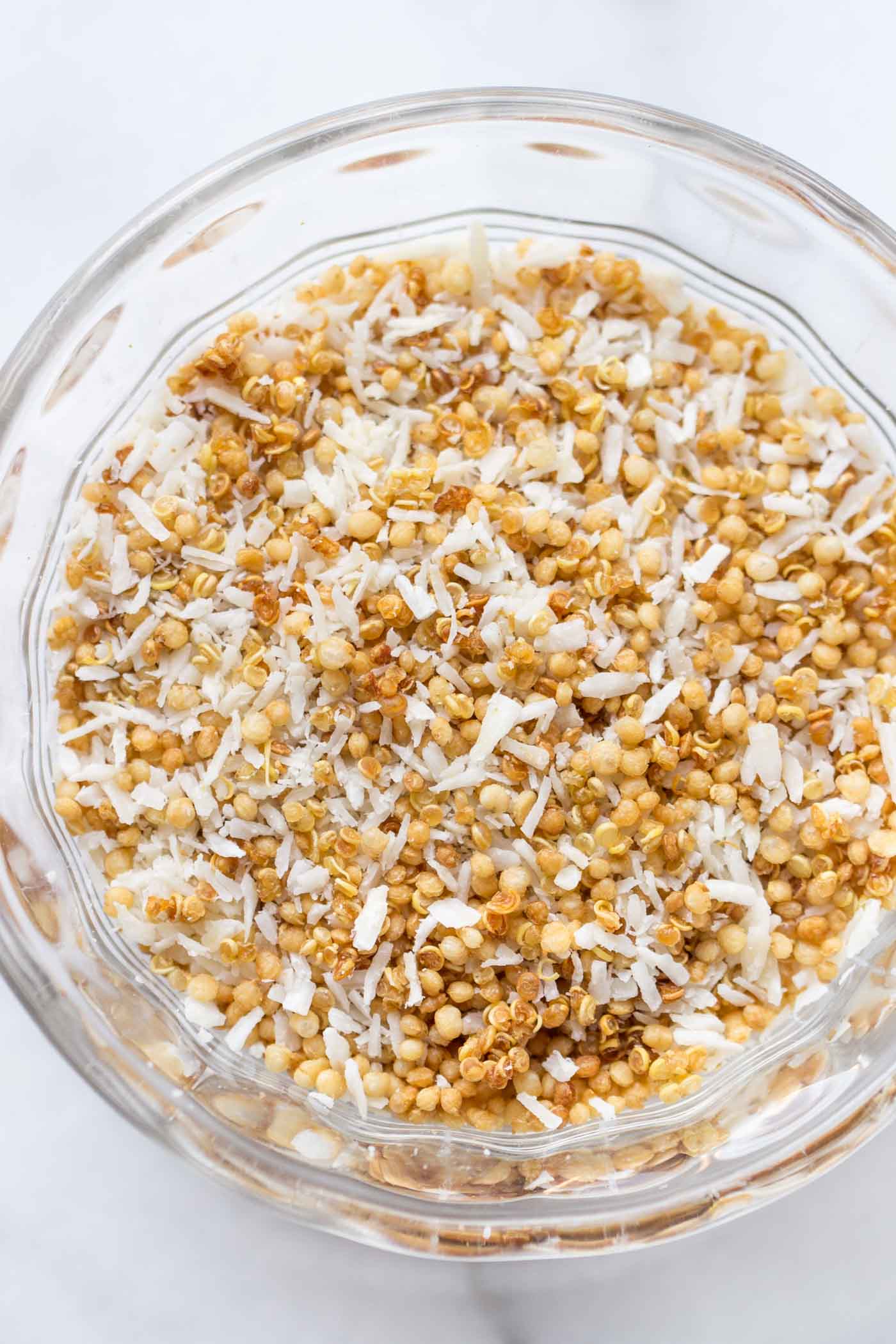 Remember how I said these are starting to become the most used ingredient in my pantry? Here's the proof. Now that I've use it in one crust…I'm thinking the possibilities are endless!

But now we need to focus on one thing and one thing only: french toast. 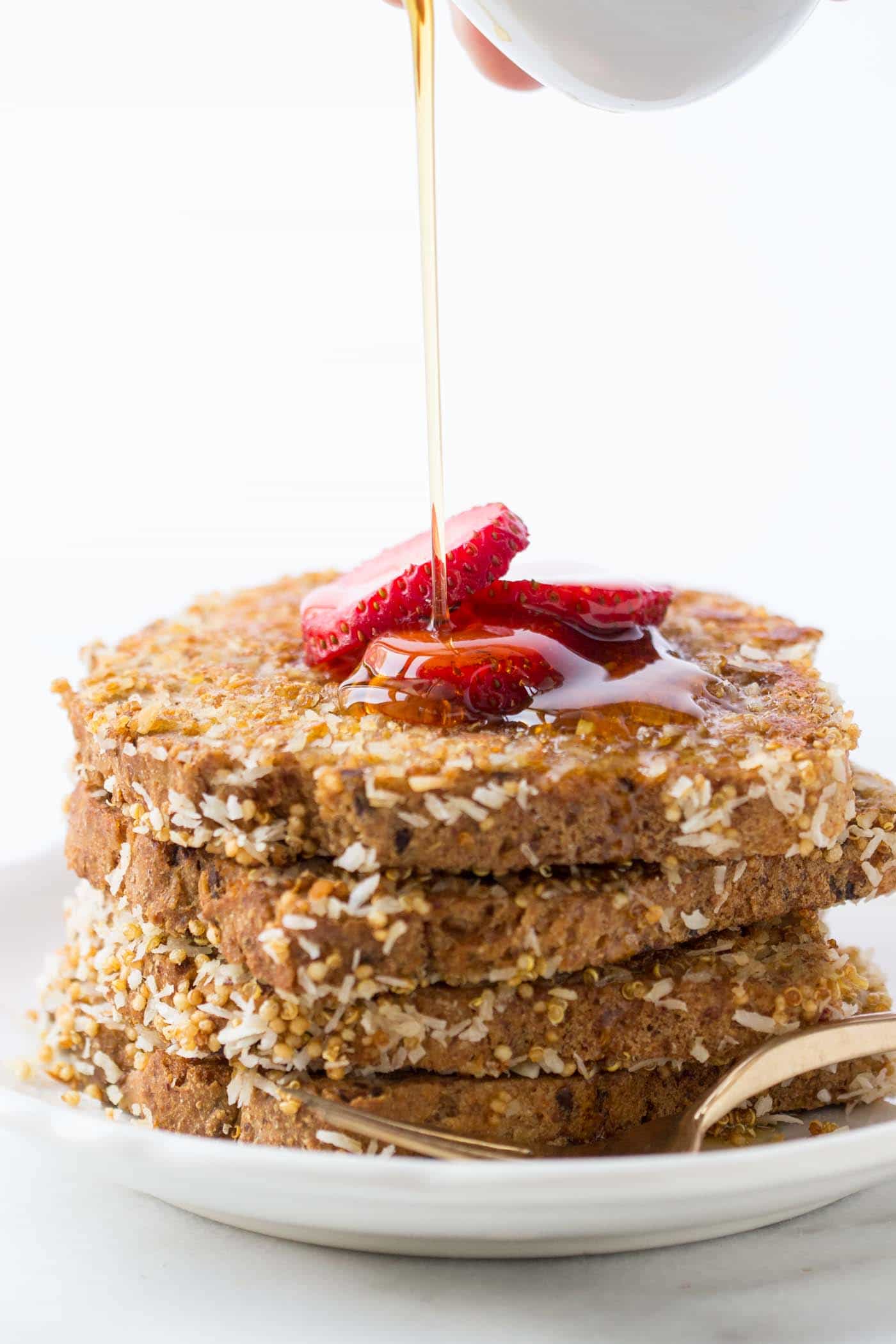 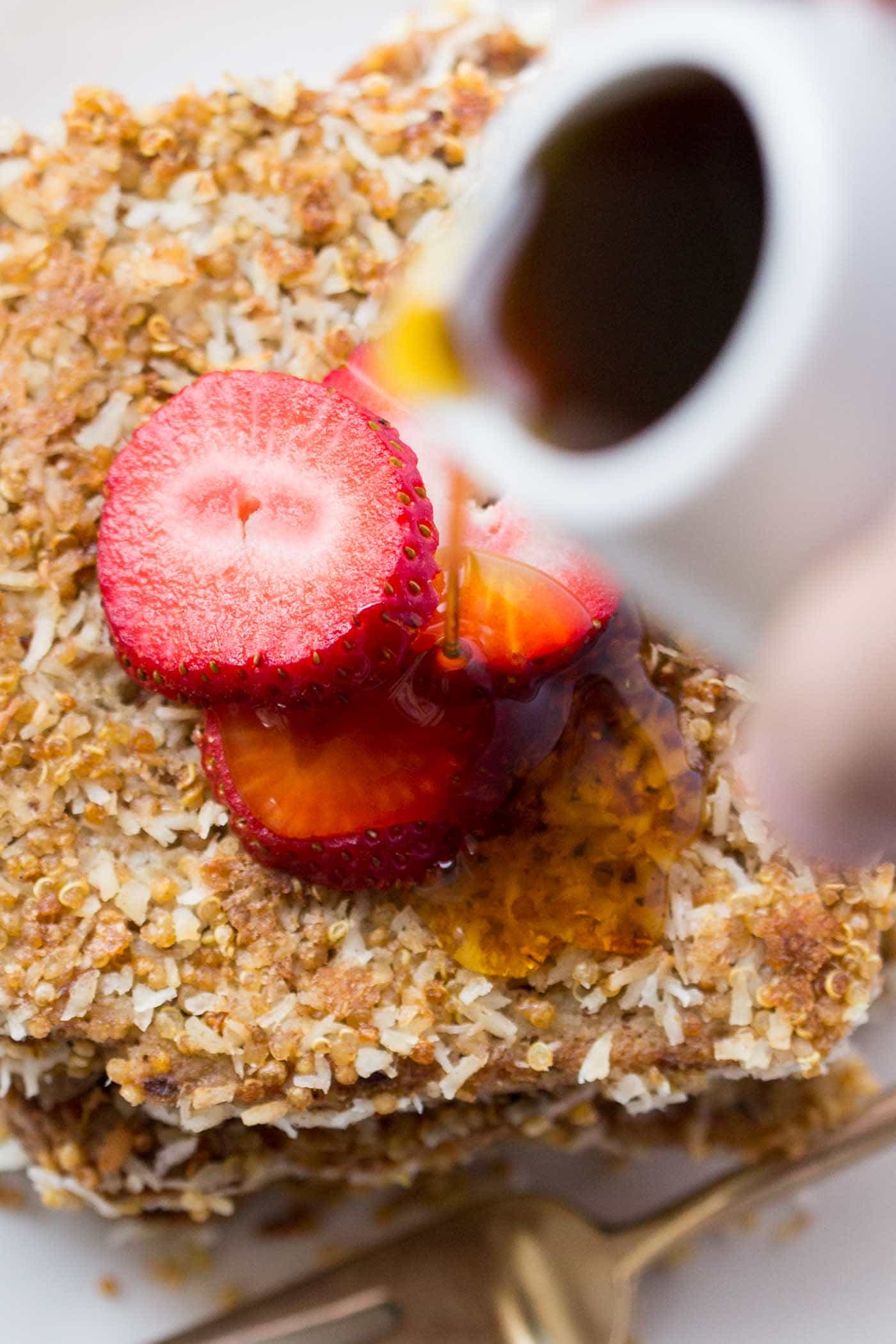 Crunchy on the outside, soft and chewy on the inside, with faint hints of coconut, warm cinnamon swirled throughout, the sweet caramel notes of pure maple syrup and bursts of fresh berries, a plate of this vegan french toast will make everything in the world seem right.

So now I think it's time you put on your slippers, head into the kitchen and whip up a batch. And I promise, if you're worried about eggless french toast…you'll never be able to tell. This french toast is absolutely dreamy. Be prepared to fall head over heels for it! 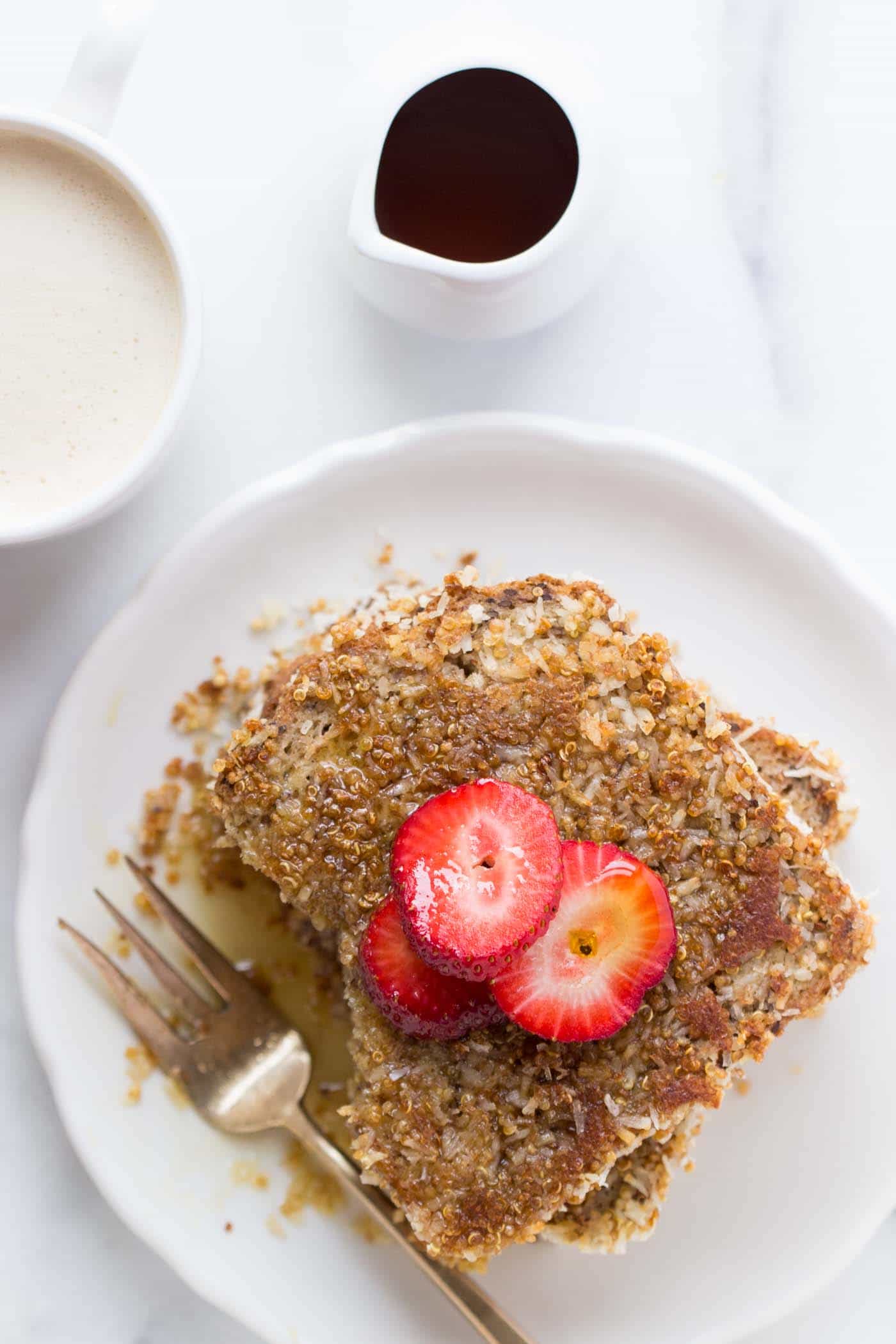 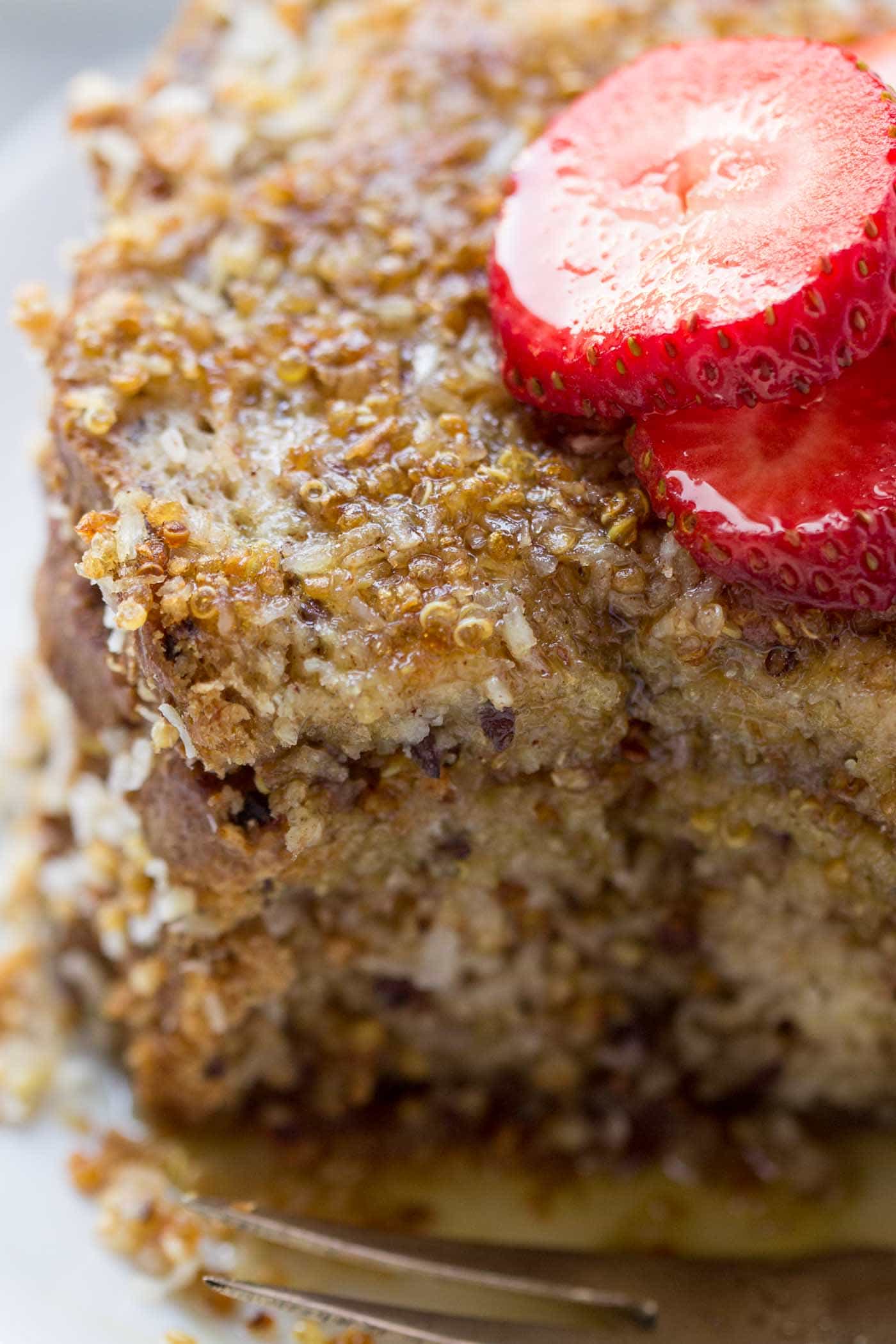 Have you ever tried making vegan french toast before? If so, let me know how it turned out! Or if you haven't yet tried it and plan to give this recipe a whirl, I want to hear what you're going to use for toppings. That's one of my favorite parts!

Pretty much the most epic breakfast ever. What's makes it even better (as if that was actually possible)? It's simple AND healthy!
Prep Time 10 minutes
Cook Time 15 minutes
Total Time 25 minutes
Servings 4 Servings
Calories 487kcal
Author Alyssa Rimmer
Print Pin 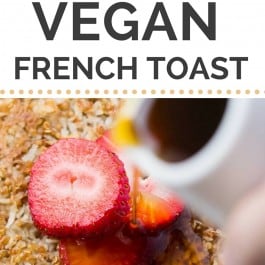 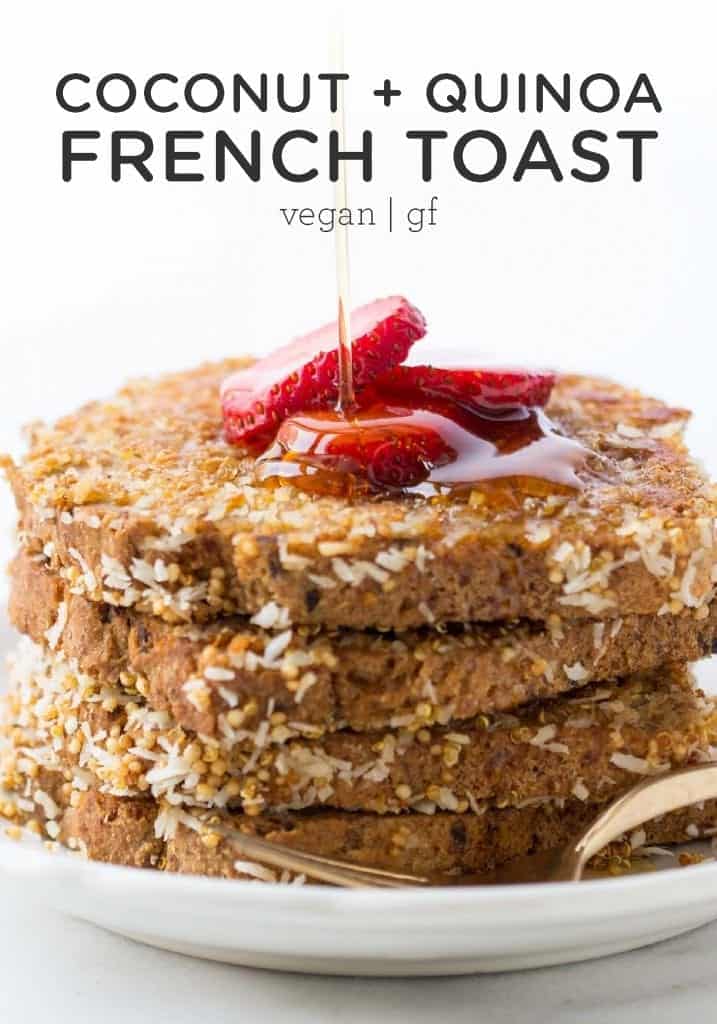