How to make Pumpkin Cornbread French Toast. This healthy fall breakfast recipe is naturally gluten-free, dairy-free and uses pumpkin cornbread for the base. 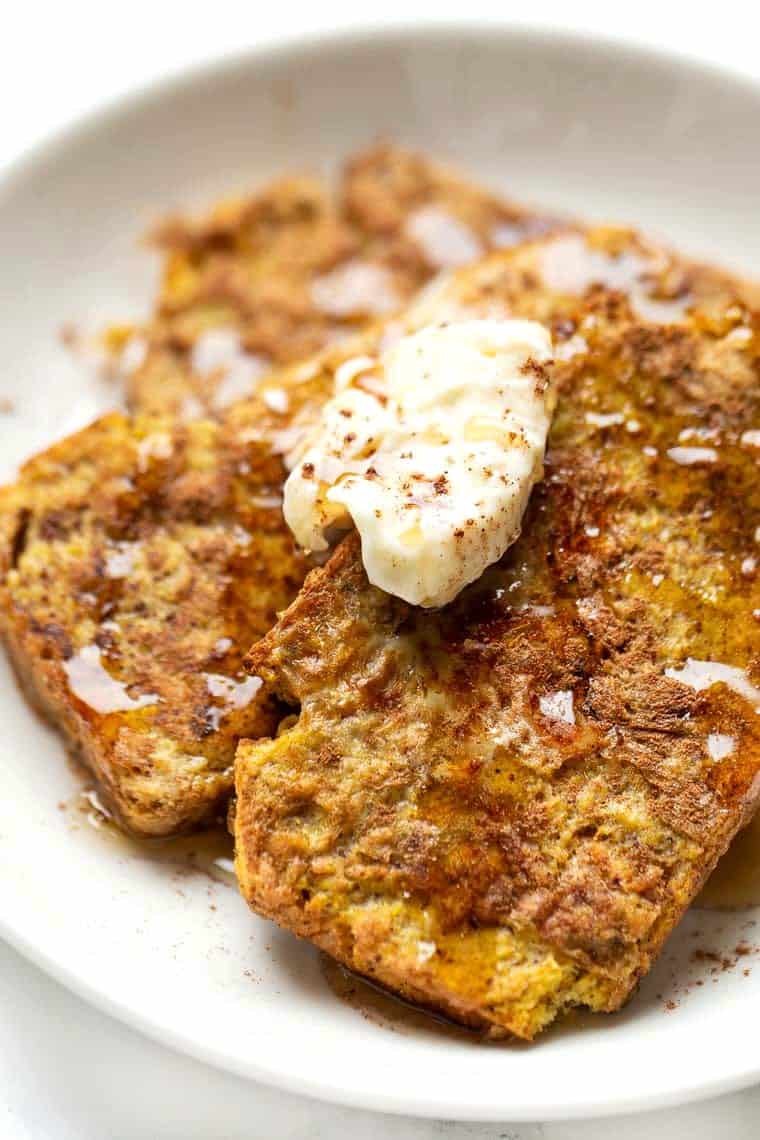 I gotta tell you, I am all about those weekend brunches. I never used to be a big brunch person, but I have quickly fallen in love with our new weekend morning routines. It looks a little something like this…

We wake up around 730/8, get our walking clothes on, hit up Starbucks and head to Central Park. We walk for about an hour, then get home, make more tea and coffee, watch an episode of our favorite show and eventually make breakfast. 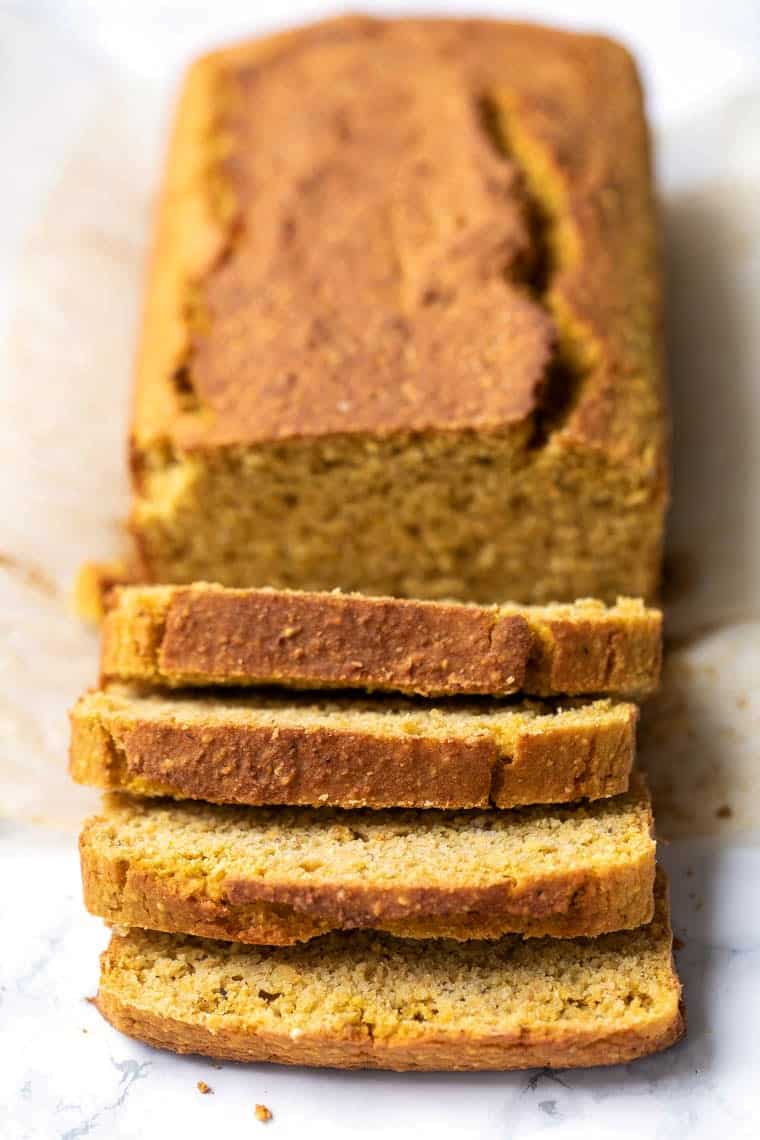 If you've been on the hunt for the perfect gluten-free cornbread recipe, I've got you covered. This is hands down one of the best and EASIEST cornbreads ever!

My pumpkin cornbread recipe in just one bowl, can be made vegan or non-vegan, has the perfect amount of sweetness, isn't too dry and doesn't crumble when you cut it.

It's also got pumpkin in there which is great for amping up the fiber content, but also perfect for when you've got just a little pumpkin puree left in your can and you aren't sure what to do with it. Now you don't have to worry because you can just turn it into pumpkin cornbread! 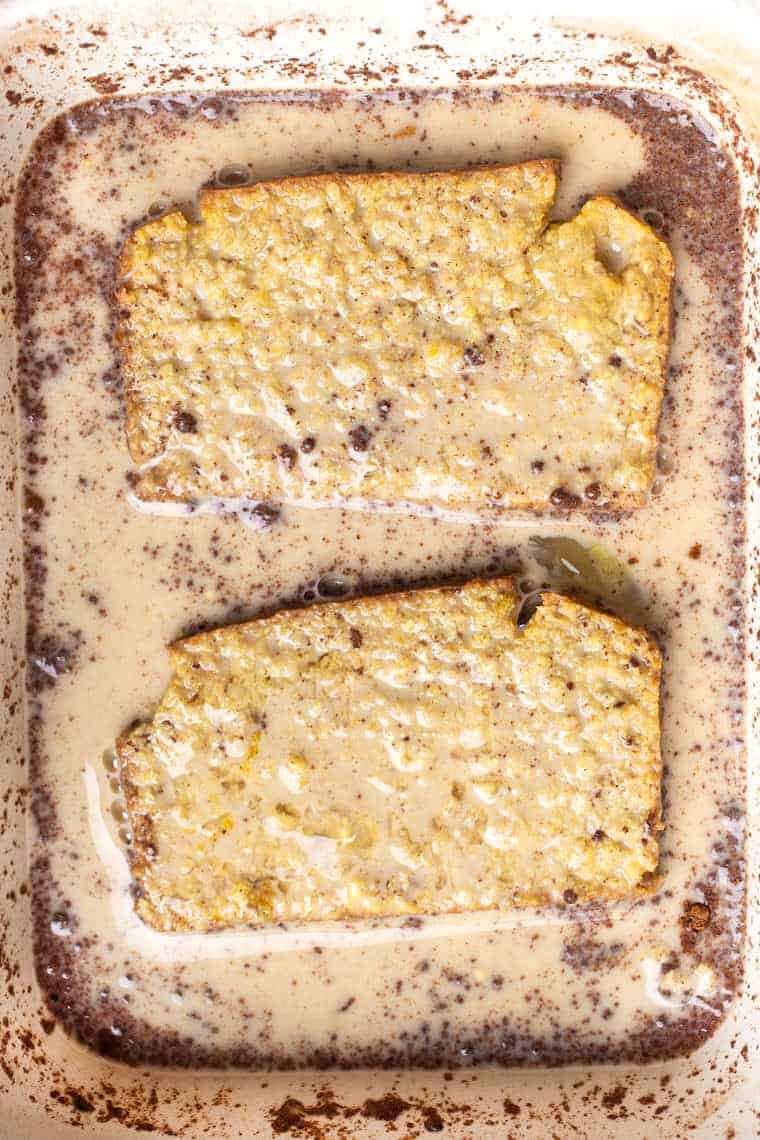 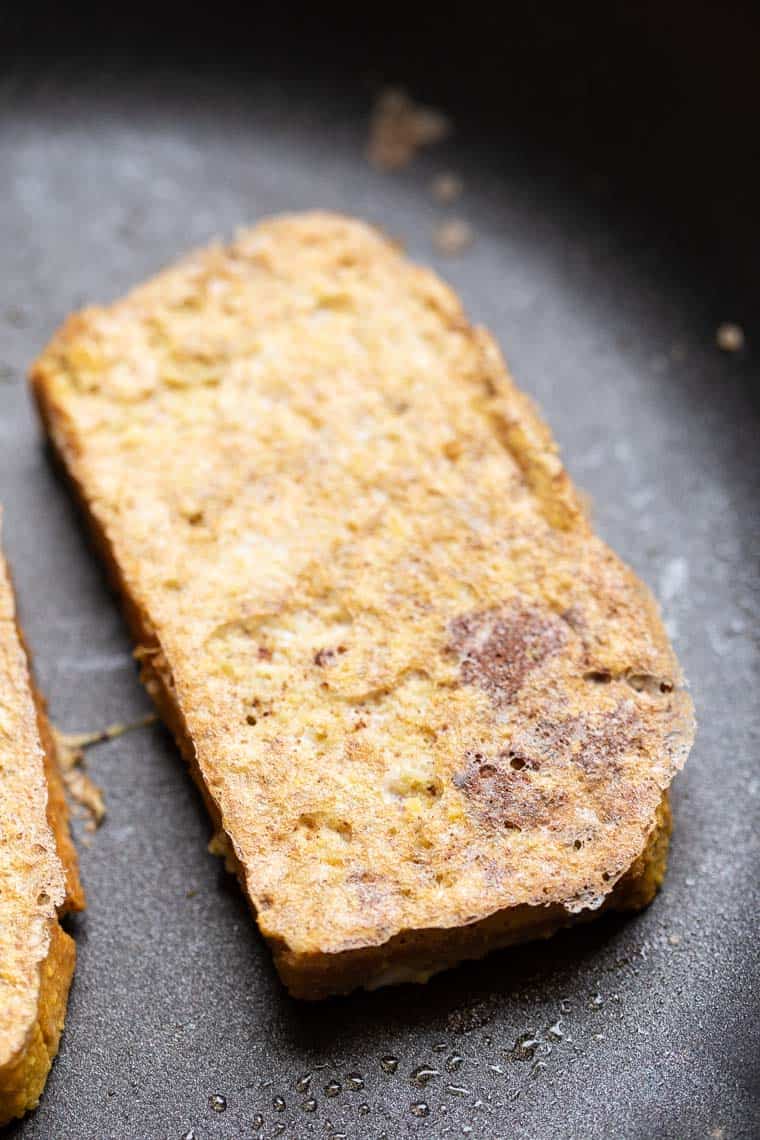 The Origins of the Cornbread French Toast

I love a good cornbread, especially in the fall with a steaming bowl of soup. I usually bake my pumpkin cornbread in a brownie pan and cut them into squares, but the other day I was feeling a little frisky and baked it into a loaf.

We didn't end up eating it as quickly as I wanted and I didn't want it to go to waste, so I decided to use it for breakfast.

And so the pumpkin cornbread french toast was born! 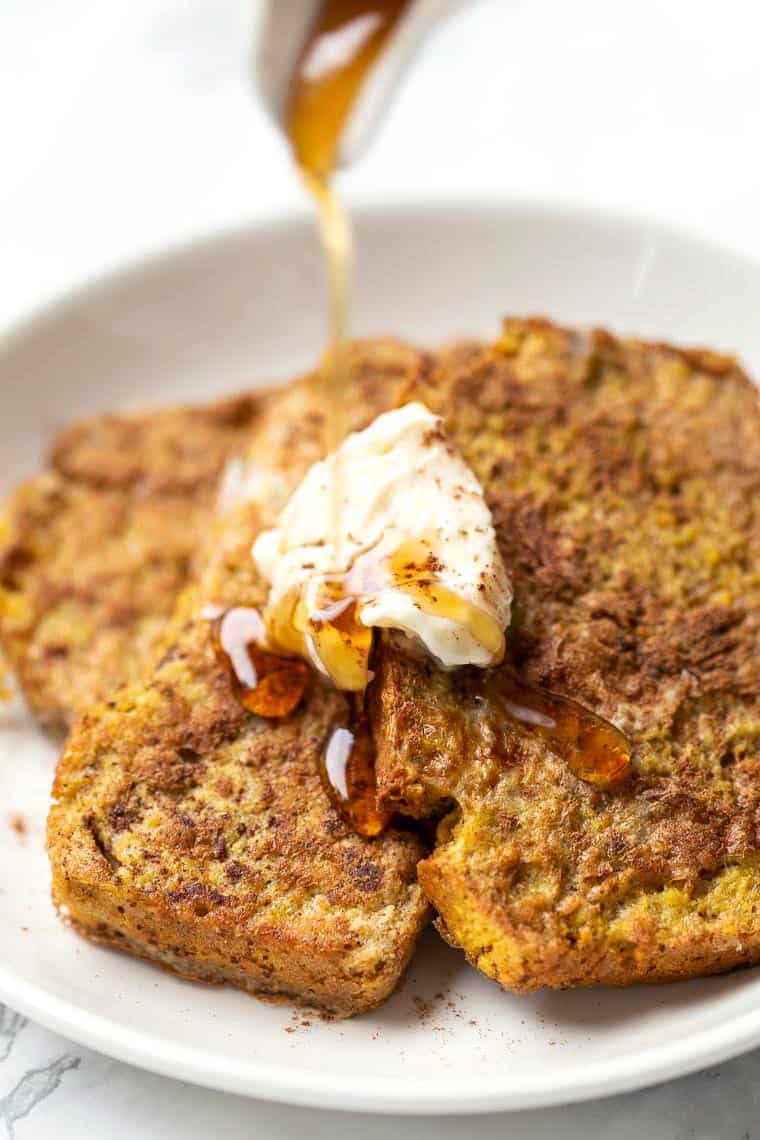 How to make French Toast

If you've never made french toast before, you're going to love how easy it is! All you need are two ingredients (plus spices if we're getting jazzy) and you've got the perfect french toast batter.

You can use whatever type of milk you want – I like unsweetened almond – and essentially just whisk those two together until you've got a creamy egg mixture, dunk in your bread, and cook it up! 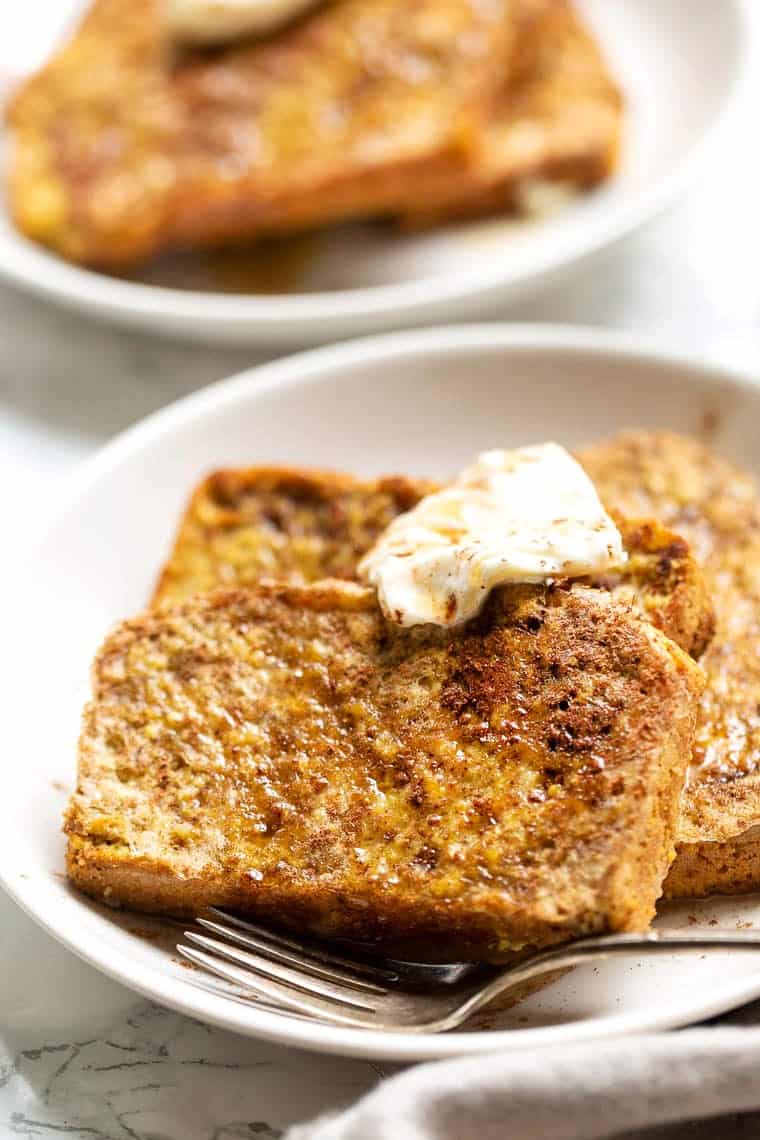 What to Serve With French Toast

I basically just think of it as a different form of pancake and usually add on some fresh berries, maybe some coconut yogurt, a little vegan butter, and syrup. Definitely syrup!

But since we've got the pumpkin thing going on with this recipe, we're skipping the berries and keeping it super simple. Just an extra sprinkle of pumpkin pie spice, some warm vegan butter, and pure maple syrup.

It honestly doesn't get any better than this! 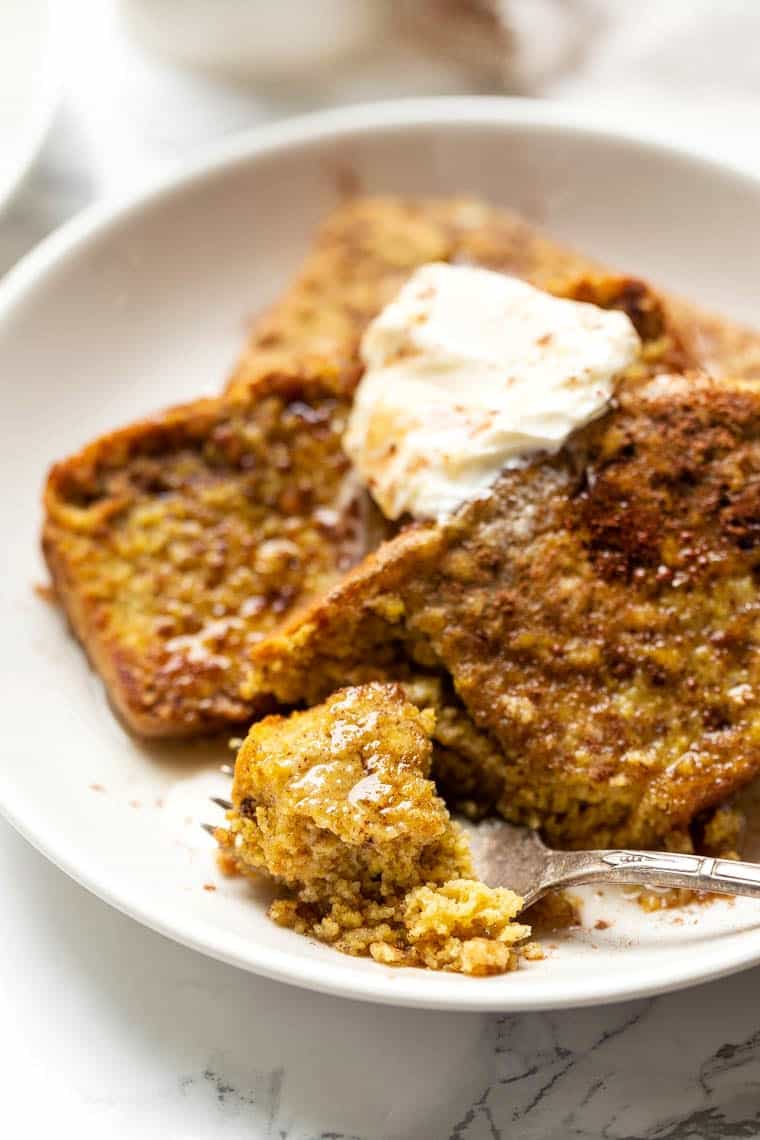 I'll be honest and tell you I was a bit wary of this being a dry, crumbly mess, but it was the exact opposite! To our surprise, it actually turned out to be heavenly. The egg batter made the inside of the french toast soft and almost gooey, while the outside perfectly was crisp and delicious. I was definitely having a pumpkin party in my mouth while enjoying this.

So next time you're looking for a fabulous weekend brunch but aren't feeling the mess that waffles or pancakes entail, you gotta try this pumpkin cornbread french toast. I mean really, what better way to use our leftover cornbread than soak it up in a pumpkiny egg batter and drizzling it with maple syrup?! 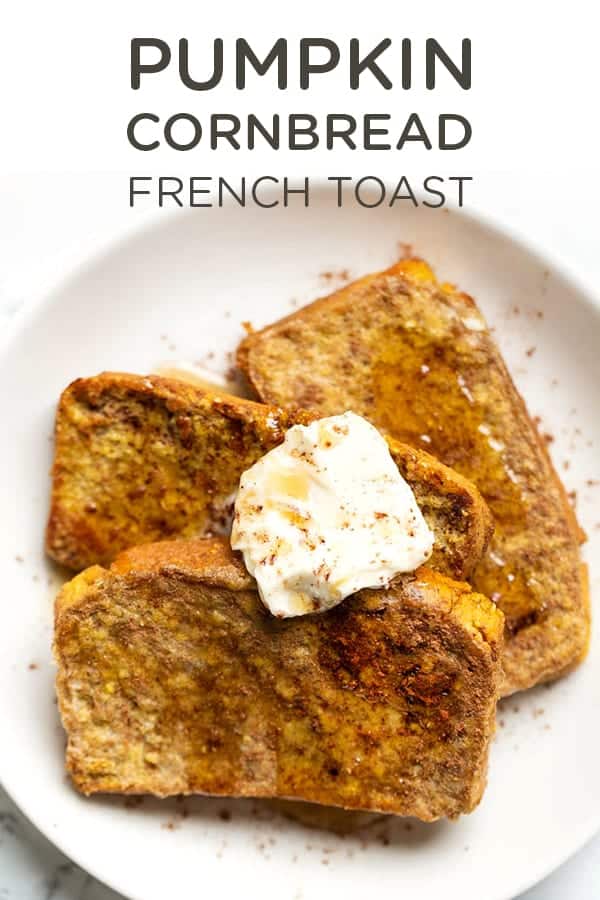 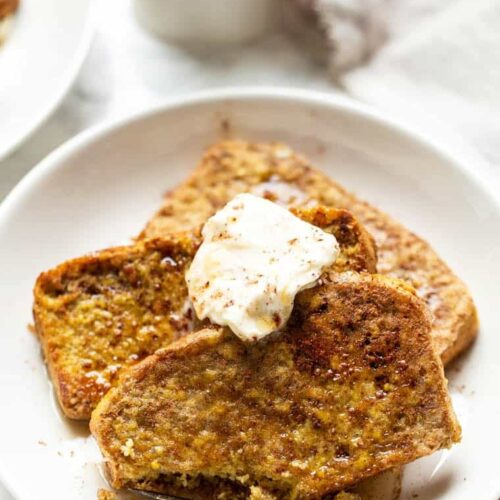 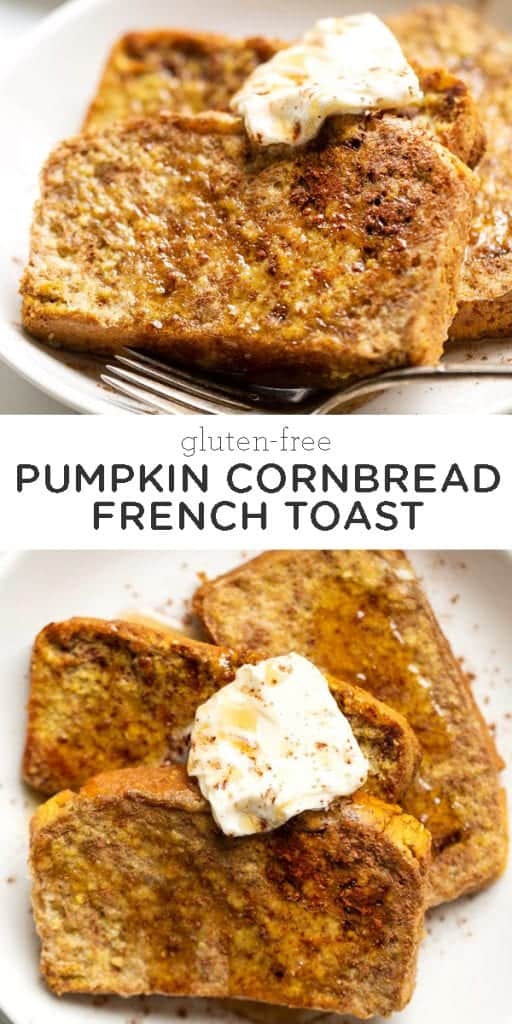 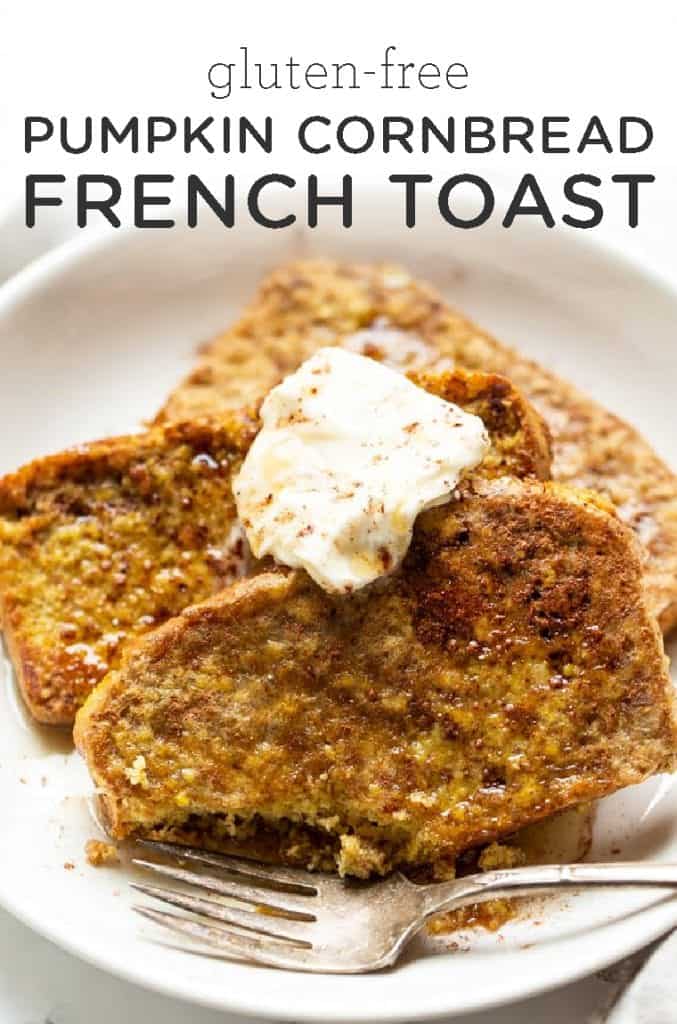