How about a non-traditional pumpkin dessert? Pumpkin bread pudding is just right. It combines pumpkin bread & French toast into one delicious dessert! With Thanksgiving only two days away, I've been dreaming of new desserts. Desserts that aren't pie. Don't get me wrong, I seriously love pie, especially pumpkin, but sometimes you want something different. Something a little out of the ordinary. Something that knocks your socks off.

Bread pudding, my friends, might just be that dessert.

I've never made bread pudding until now and I feel crazy for not trying it earlier. It reminds me of eating a bowl of French toast. Like cereal, but made out of French toast. But better than Cinnamon Toast Crunch. It's like…okay, I'll stop. It's just amazing.

And when it's made out of my vegan pumpkin bread? Mmmhmm!

When I set out to make this pumpkin bread pudding, I wasn't too sure how it would turn out. I had made a loaf of pumpkin bread earlier in the week, froze it and figured why not turn it into bread pudding? At least give it a whirl and see how it turned out. Turned out to be awesome.

Now, the key to a good bread pudding (at least what I've read) is to dry out the bread a little bit. It helps keep the pudding from getting mushy.

Typically along with the eggs, you'll find that recipes call for heavy creamy. I thought that full-fat coconut milk would work, but didn't have any on hand, so I made some thick cashew milk, sweetened just lightly with honey and sprinkled with cinnamon. It ended up being just right.

Then, to finish off this bowl of pumpkiny goodness, I decided to add something sweet and sugary on top. I tossed some leftover quinoa with coconut sugar and cinnamon, added it on top and it was this perfection. A little cinnamon-sugar never hurt anyone 🙂

Now, a question for you: 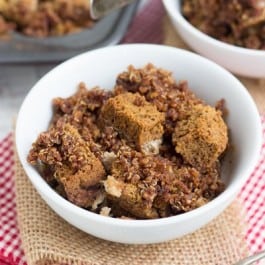 for the bread pudding

for the quinoa topping