These vegan chicken salad bowls combine all the classic ingredients but leave out the meat. Made with tempeh, there are 25g of protein per serving! 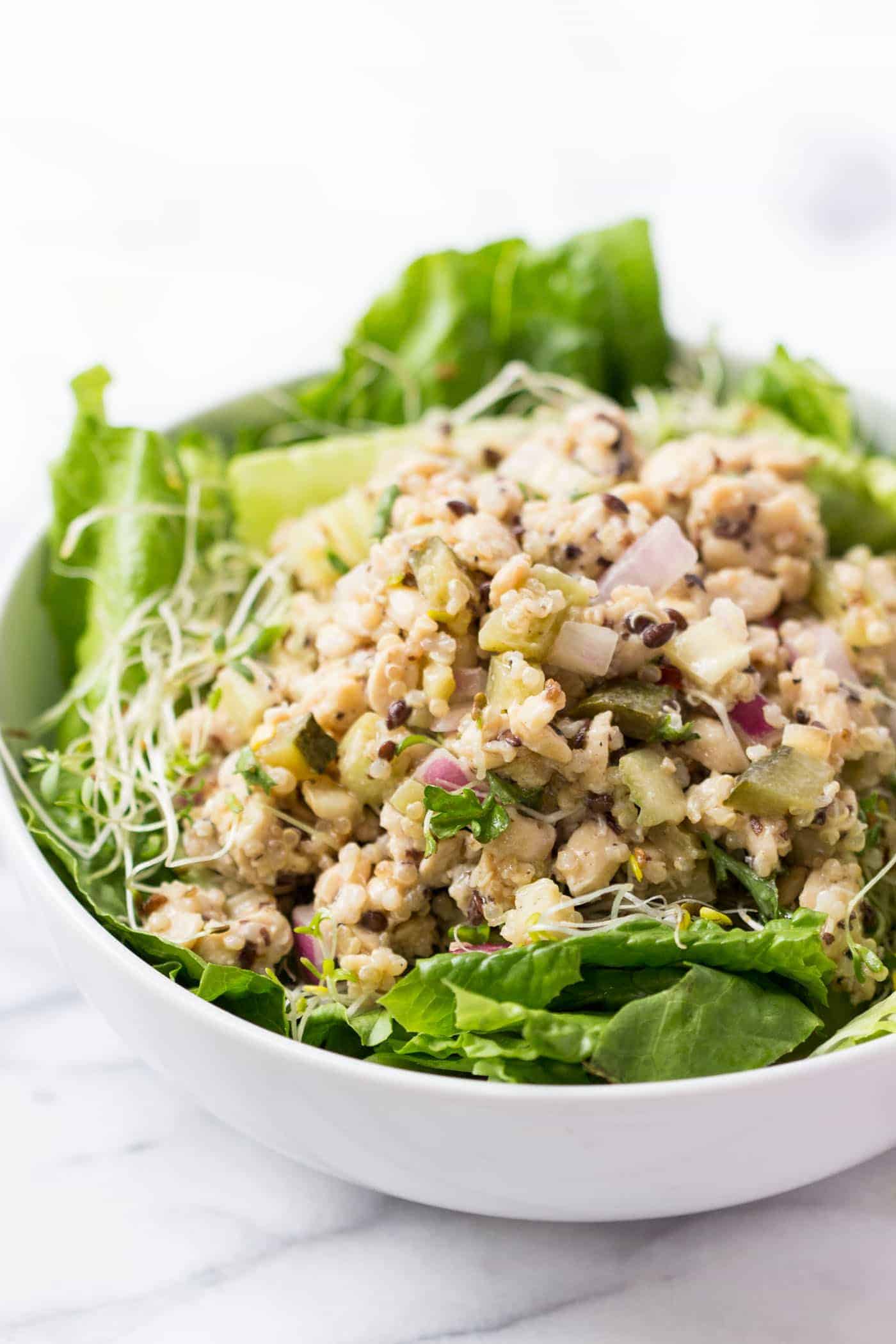 Clearly I'm not quite ready to let go of summer yet. Even though yesterday we had an autumn-inspired Apple + Pecan Arugula Salad, today we're going back to one of my favorite picnic meals: chicken salad.

Typically chicken salad is served in a sandwich/wrap, but ever since my grandmother started eating it on a bed of lettuce instead, I realized that this type of meal does need the extra bread. It's every bit as delicious plopped on top a bed of greens. And since it's creamy, you don't actually need a dressing either. 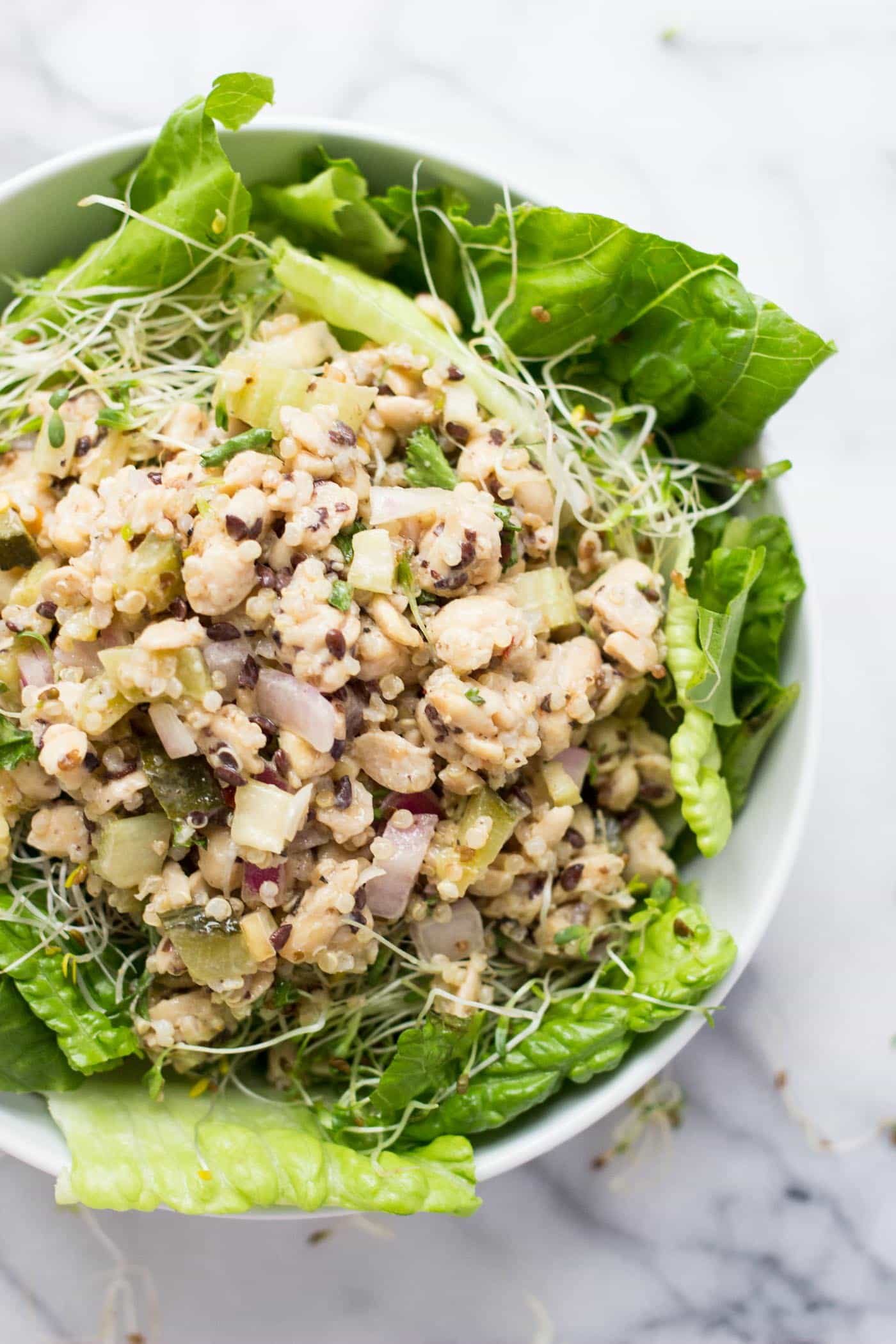 So clearly this is a meatless recipe (no chicken here!), so to replace the chicken, we're going with tempeh. You could buy a vegan chicken alternative, but those are often too processed for my liking. Tempeh on the other hand? Love.

If you aren't familiar with tempeh, it's a soy-based product made from fermented soybeans and turned into a kind of brick shape. It's high in protein, has some trace minerals and unlike tofu, I like that tempeh also has some good bacteria because of the fermentation process.

The texture of tempeh is different than tofu; it's much firmer and can easily be sliced (or crumbled in this case), but does have a fairly bland taste. So you're definitely going to want to jazz it up with some flavors, which is precisely what we're doing here. 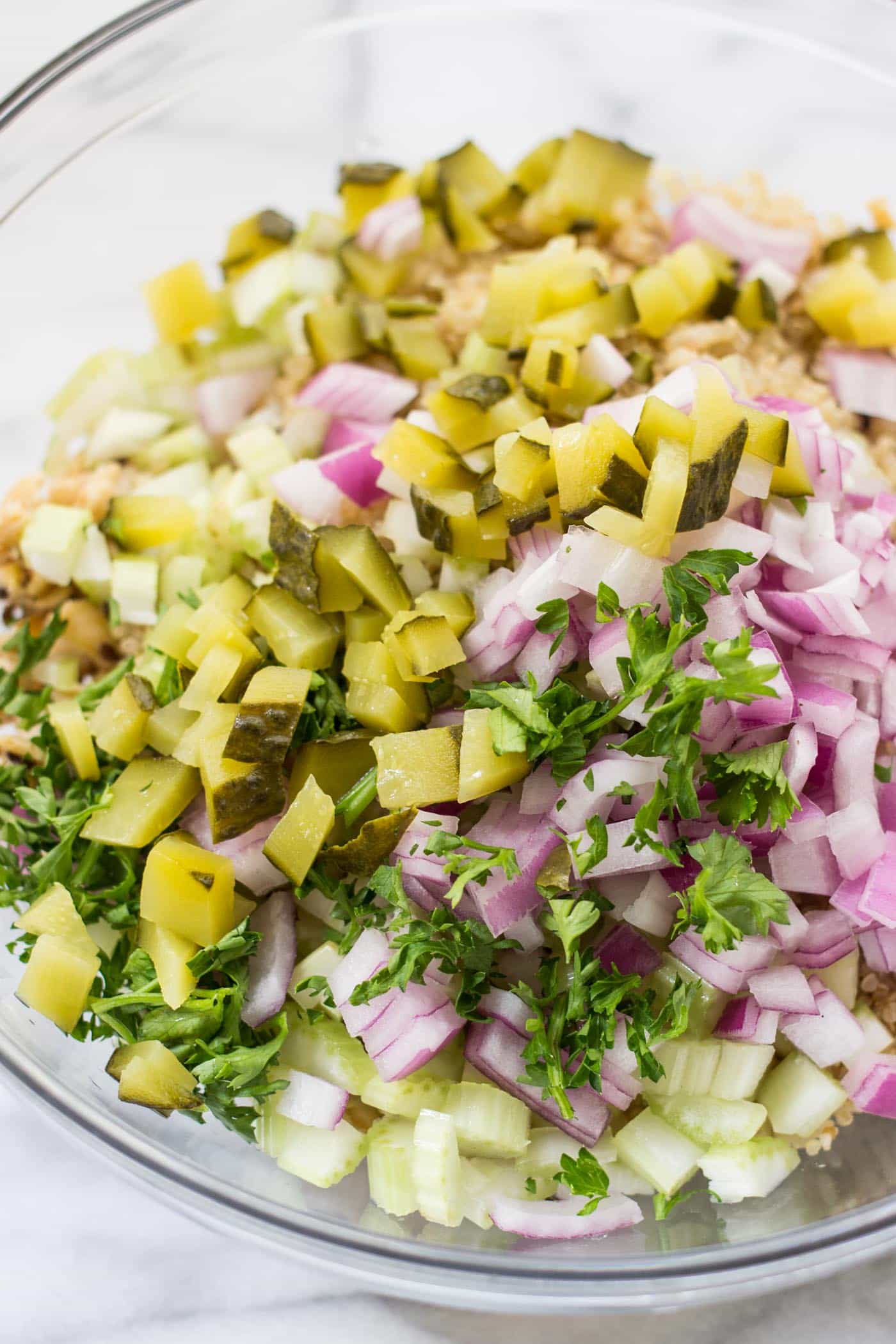 This recipe has all the traditional chicken salad ingredients: celery, red onions, herbs, mayo. With a few fun additions like pickles, quinoa, and dulse flakes. It's crunchy, salty, briny, tangy, meaty and creamy.

And all you have to do to make it is toss everything in a bowl, whisk up your dressing and then stir it all together. Simple, easy and tasty! Just the way a salad should be! 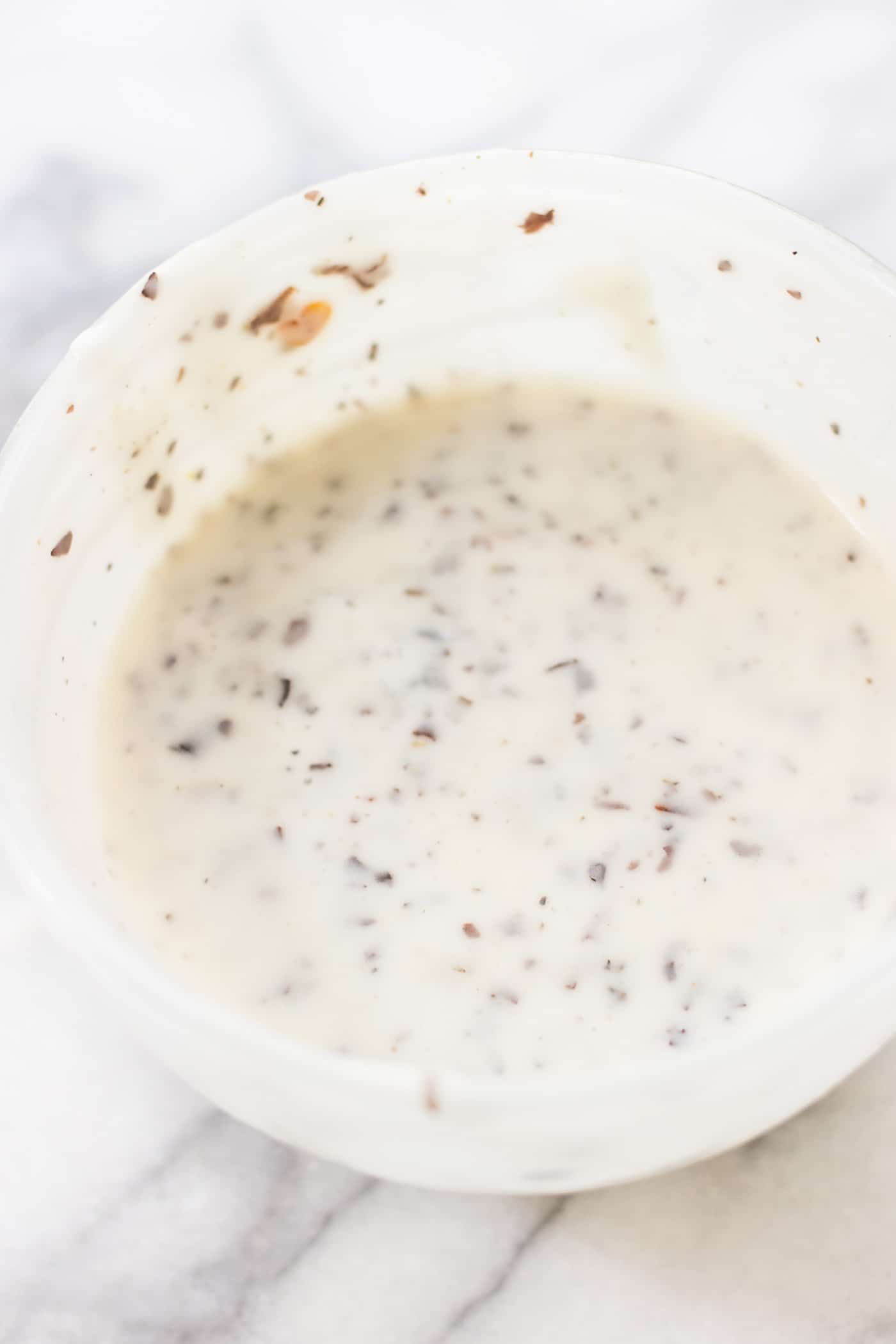 For the dressing, I used a new vegan mayo that I recently discovered which is pretty freakin' neat. Instead of eggs, they make their mayo with aquafaba which is whipped chickpea liquid.

It has the exact same texture as a traditional mayo, even tastes like real mayo, but doesn't have any weird additives to make up for the fact that it's vegan. (also, they have a chipotle version which is excellent)

So the mayo is the base of our dressing, but we're also adding in some lemon juice and some of the pickle brine to give it more body. Spices were just salt, pepper, and red pepper flakes, and then I decided to throw in some dulse flakes for added flavor, but that's totally optional. 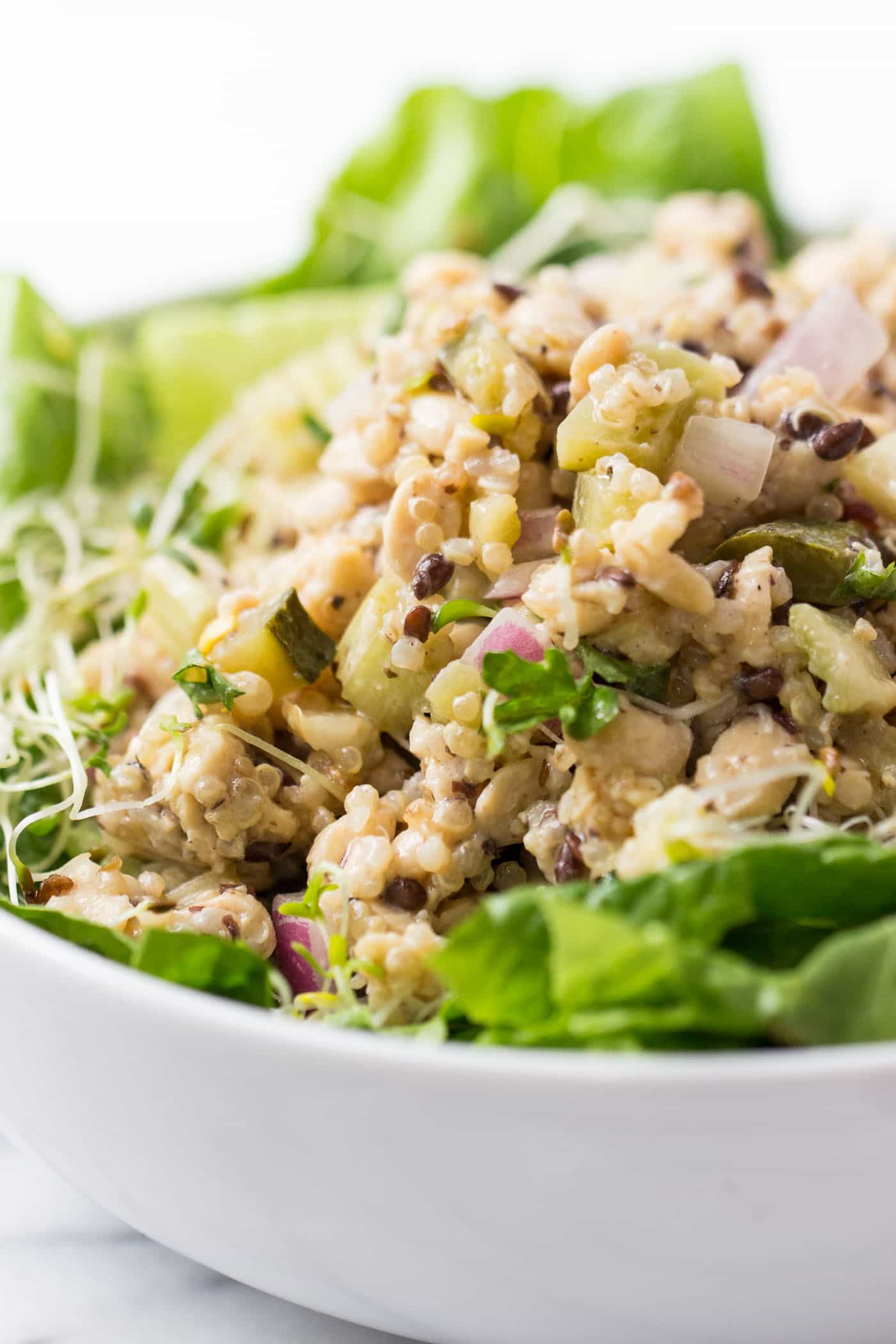 And to finish off this recipe for you, it's just some romaine and alfalfa sprouts and then a generous scoop of our chicken salad. It honestly felt like a little bit of a cop-out when I put it together because it was so easy, but after I ate a bowl for lunch, I realized it didn't need anything else. Simple and delicious, just the way we like it around here!

One final thing to note about this recipe: you can make this recipe in big batches and stored throughout the week. So if you're wanting to get ahead of the lunch/dinner game for the week, whip up a batch and keep it in the fridge for an easy meal all week long. And if you get bored of the salad portion, you can totally use it in a wrap, sandwich, etc. Enjoy! 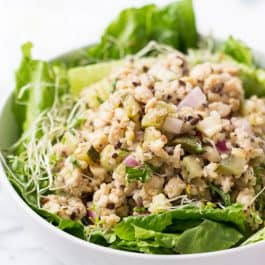 Catch up on all the videos from #SALADWEEK!