My ultimate Summer Produce Guide is here to share what you can find in season, how you can use your seasonal produce and the best time to buy it too! 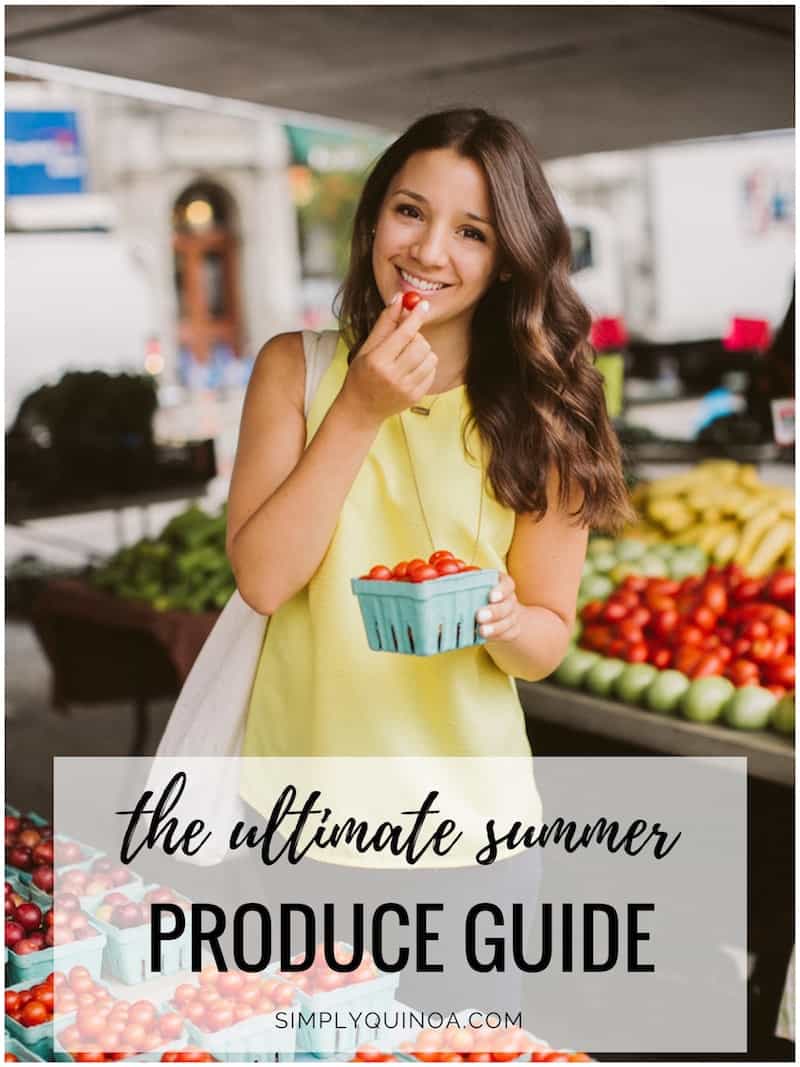 One of my absolute favorite things about summer is the produce! I live in the Northeast so our summers are quick, so it’s important for me to soak up as much sunshine as possible while eating ALL the fruits and veggies!

Since I know many of you are also in a place where seasonality affects what you have access to, I thought it would be fun to put together a quick summer produce guide! I’m going to walk you through the various different summer produce options you might find at your local farmer’s market!

Asparagus grows from March until June, so it's kind of on the edge of summer, but one of my favorites. Nutritionally speaking, asparagus is high in iron, potassium, manganese and selenium. It's also high in fiber, is a great source of vitamin K and it serves as a natural diuretic which means it helps the body produce more urine, which flushes out toxins, excess salt and other fluids.

Blueberries grow for most of the summer! You'll probably start to see them pop up in June and they'll go all the way through August. On the nutrition side of things, blueberries are amazing. Not only are they high in antioxidants, but they're also detoxifying, low in sugar, high in fiber and full of vitamins and minerals. Blueberries are especially high in vitamin C, K and manganese.

Blackberries tend to grow towards the end of summer, from August to October. They're my favorite berry and I'm lucky that my parents have wild blackberries growing all around their house. Picking them is such a special treat! When it comes to nutrition, they're similar to blueberries in that they're low in sugar, high in fiber and also very high in antioxidants. Blackberries are also anti-inflammatory and can help support a healthy immune system!

These sweet little fruits are in season from May to June, which is why I always make sure to stock up! Cherries are fiber-rich, high in vitamin C and are also low on the glycemic index. They've also been shown to support weight loss, decreased inflammation, increased heart health and can even be used to treat gout! 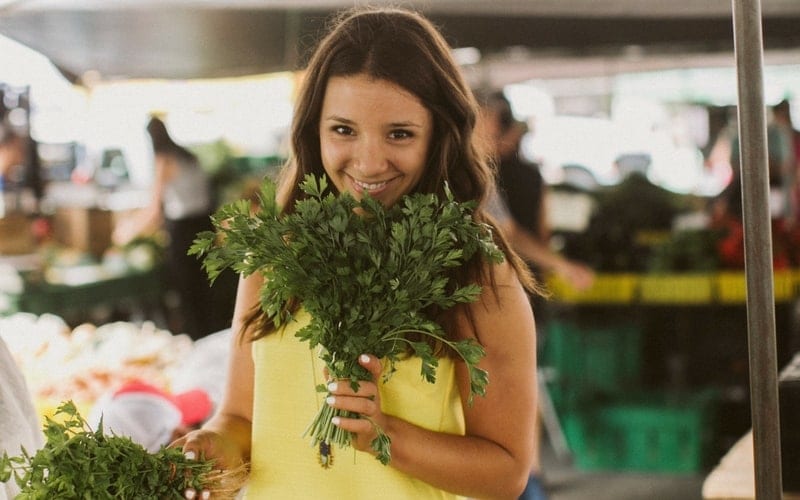 One of the best parts of summer is corn on the cob, but for many of us, we have to wait until mid-summer for it to get especially good. The growing season is May – September, but I tend to get the best corn end of July to early September. Corn gets a bad rap because of the way it's used in most foods, but if you're buying organic, non-GMO corn from your local farmer? It's amazing! Corn is high in B vitamins, fiber, complex carbohydrate so it digests more slowly and it's naturally gluten-free (which is awesome)!

Cucumbers are grown May – August and are pretty much the epitome of summer! Not only are they an incredibly hydrating food, so they prevent dehydration (amazing in the summer!) and constipation. Cucumbers are also detoxifying and help cleanse the liver, they're high in nutrients while still being low in calories, and they're awesome for glowing skin! I love adding cucumbers to my smoothies in the morning because it's an easy way to sneak in more veggies & nutrition without compromising taste!

You guys know I simply adore my greens and summer is the PERFECT time to stock up! Pretty much everything you can imagine is in season, including kale, spinach, arugula, lettuce, cabbage, bok choi and more. Why do we love greens? Not only are they detoxifying, but they're high in antioxidants, are packed with vitamins and minerals, and they help fight inflammation. From salads to green smoothies, there's no end to what you can do with greens!

Green beans have a bit longer of a season that snap peas, but I'm putting them together because I find they are often times interchangeable in recipes. Green beans grow from May to September, where snap peas grow from around April until August. Both make amazing raw snacks dipped in hummus, but they're also nutrient-dense. They're both high in fiber, high in antioxidants, there's a little bit of protein they're high vitamins C and K!

Eggplant is a late-summer vegetable, and it's one you can almost always find year round, but it has so much more flavor when you buy it in season. Nutritionally speaking, eggplant has a ton of vitamins and minerals like manganese, B vitamins, folate and vitamin K. But what makes eggplant unique is a specific type of antioxidant it contains called nasunin. Nasunin has the ability to fight free radical damage in the body (that's what antioxidants do), but it also helps fight inflammation and is an iron “chelator” meaning it helps iron become more absorbable in the body. Plus, eggplants are high in fiber and very low in calories, so they make an amazing addition to summer meals! 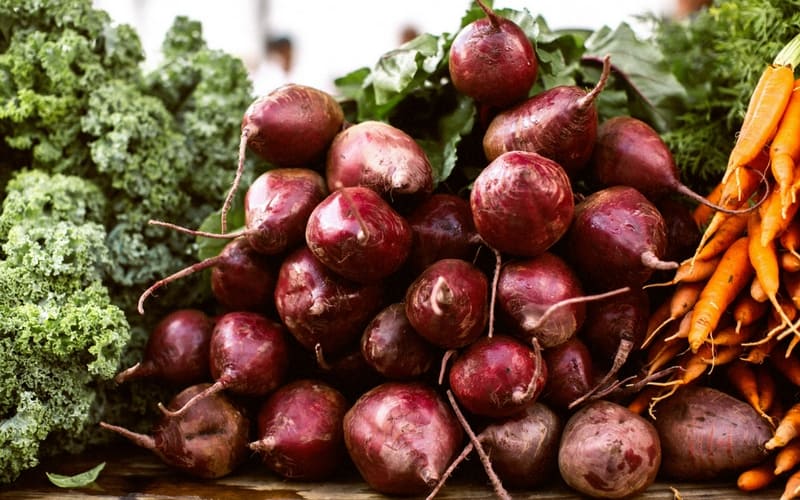 One of the classic summer staples is melon! I'm lumping all melons together in this category since they have a similar growing season, which is May – August/September. Melon has a host of nutritional benefits, but mainly they are super hydrating while being high in fiber and low in calories. They're also super high in vitamin C which is great for supporting a healthy immune system and they're also anti-inflammatory and detoxifying!

Radishes have a growing season from May – July and are one of the most incredible foods! Not only are radishes amazing at naturally detoxifying the body, but they're also an alkaline-forming food which helps to balance the pH of our body. Since radishes are high in fiber, they're a great addition to salads to help make them a bit more substantial and filling, as well as giving you a boost of vitamin C, some folate and also potassium!

Another summer berry that I can't get enough of! Raspberries have a longer growing season, much like blueberries, and can be found from June – October. What's great about raspberries, similar to all our other berries on this list, are the high amounts of antioxidants and fiber, paired with low sugar and low calorie count. Raspberries also have a very refreshing flavor, with a light sweetness and mild tang. They're an excellent summer snack or dessert (and also amazing in smoothies)!

Our last berry on the list are strawberries! There's almost nothing better than a freshly picked strawberry – it's amazing how different they taste from the ones you find in the store. Sadly, strawberries have a fairly short growing season, usually from around June – August (peak being late-June to early-July). Strawberries have the same properties as our other berries, but what's unique about them is they're especially great for your skin! 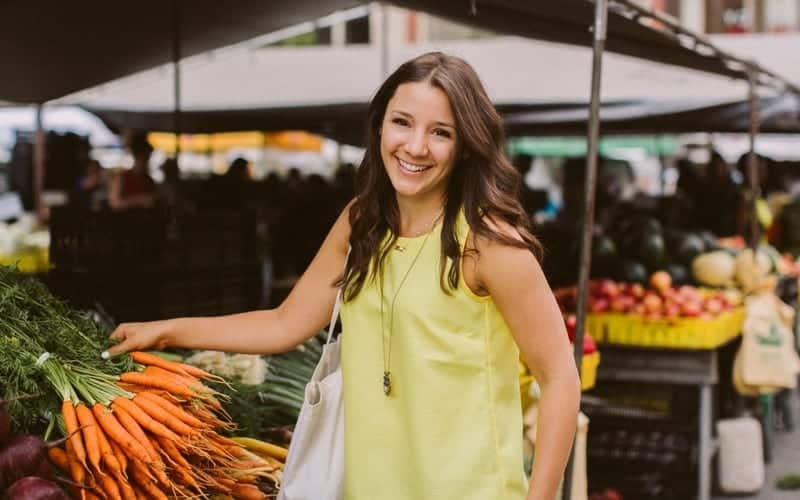 Stone fruits I'm lumping together to include peaches, plums and nectarines all of which are incredible summer delights! While technically cherries are a stone fruit as well, those deserved their own section because the nutrient profile is a bit different. Peaches and plums grown from June – September, and nectarines are best May – July. All three are high in fiber, reduce inflammation, are good for candida, and support eye health as well!

I don't think many of us think of tomatoes as seasonal since they're so common in our diet, but they are a summer produce and grown from May – August. Tomatoes are amazing, not just because they are incredible in so many recipes, but they're also super hydrating, have anti-aging properties and can help fight cancer. Lycopene, which is found in tomatoes, has actually been shown in some studies to reduce tumor growth, and can help protect against lung, stomach, colon, oral, breast AND cervical cancers!

Last but not least, ZUCCHINI! I have a big time love affair with zucchini, especially since discovering spiralizing a few years ago, and it has become a staple in my diet. I love turning it into pasta, but when frozen it's also amazing in smoothies, and it grills well. Nutrition wise, zucchini is super low on the glycemic index, it's low in calories, fat, starches and sugar, and is high in water so it's really hydrating. It's a great source of vitamins C, B6 and riboflavin, and as I mentioned, it has a TON of uses! Here are some my favorites ❤️ 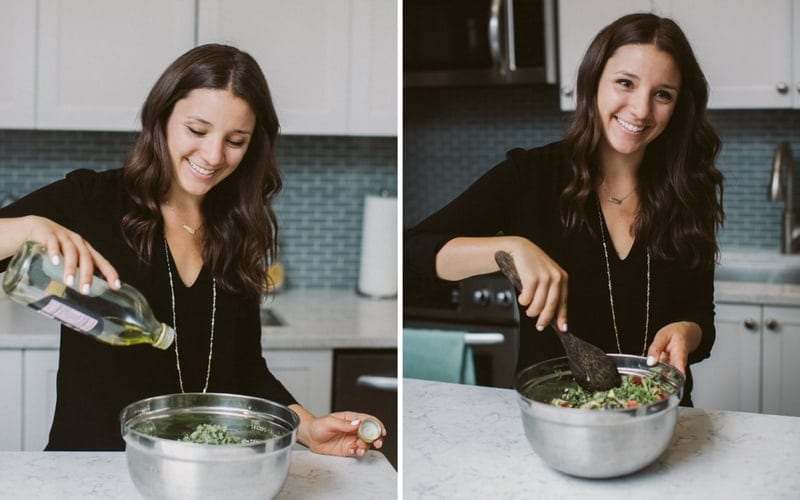 Of course, there are a bunch of other summer produce that you'll also see, but I wanted to keep this guide focused on the most common items you'll see. I definitely recommend that you experiment! This is a time of year when “strange” or unfamiliar produce is at it's cheapest, so grab something you'd never tried before and have a go!

Pinterest can be a lifesaver when it comes to finding recipes. So pick something up (like kohlrabi for example), do a quick search on Pinterest and you'll find a million options to try!