Love chicken pad thai? Yeah, me too. But sometimes I'm just not in the mood to have a huge bowl of noodles with zero nutrients covered in a high-fat, high-sodium peanut butter sauce.

While it sure tastes delicious, more often than not, after I finish off the bowl I'm left feeling overly stuffed, sluggish and unsatisfied.

So rather than create a version of pad thai using quinoa (which, now that I'm thinking about it I very well might do…yum!), I figured I would try and reinvent the flavors of chicken pad thai and put them into quinoa burgers. In case you can't tell, I've gone a little quinoa burger crazy lately. What I love about creating a burger with quinoa is that you don't have to use gluten-free breadcrumbs – which means you either a) save $6+ or b) save those precious slices of your favorite loaf (both of which I'd rather not sacrifice).

Typically, when you make meat-based burgers you don't need to add bread crumbs, I get that. It turns into more of a meatloaf. But I think ground turkey and chicken is different. It's stickier. It's more slimy. It's harder to handle.

Which is why when you add a little quinoa, it gets a heck of a lot easier to deal with. Plus, it just tastes good 🙂 To make these particular chicken quinoa burgers extra pad thai-ey, I loaded up the meat with a delicious gluten-free pad thai sauce, mixed in some quinoa and then seared and baked them so they were extra juicy.

(ps: I've found that when you sear and then bake your meats in the oven at 400 degrees, they turn out way juicer than if you just grilled them)

So…let's chat about the sauce for a hot sec.

If you've never made pad thai before, you might be surprised how few ingredients you actually need to create this delectable sauce. It starts with a dash of soy sauce, then some fish sauce, lime juice and peanut butter. Plus, maybe a little ginger and sriracha sauce for an extra kick. Seriously, you'll feel like you're taking a big bite of chicken pad thai with each taste of this burger.

So rather than create a version of pad thai using quinoa (which, now that I'm thinking about it I very well might do...yum!), I figured I would try and reinvent the flavors of chicken pad thai and put them into quinoa burgers.
Prep Time 5 minutes
Cook Time 15 minutes
Total Time 20 minutes
Servings 4 burgers
Calories 362kcal
Author Alyssa Rimmer
Print Pin 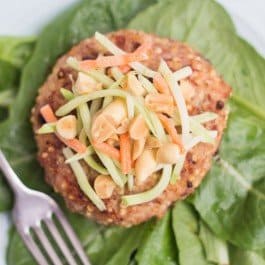