Simple, delicious and starch-free, this multigrain pizza is loaded with healthy flours and stands up well to all your pizza topping desires! For the longest time, as in like two years, I haven't been eating red meat. It isn't because I don't like the taste, or that I'm against eating meat in general, I just stopped eating it one day and never started again. Until Eataly.

Have you been to Eataly? It's amazing. I mean for someone who is gluten-free, it's a bit of a torture chamber as you're surrounded by homemade pasta, bread, and pizzas, but for someone who is obsessed with Italian food, like me, it's a little slice of heaven in the hustle and bustle of New York City. I went there with my mom for the first time a few months ago and was blown away. Not only did they have perfect produce, but the cheeses, the wines, the cured meats, the chocolates, the cookbooks, the gelato…oh the gelato! I literally wanted to stuff my face with everything in sight.

Being that that's not humanly possible, I opted for stuffing my face with goat cheese and Proscuitto. My first red meat in almost two years. And it was A-M-A-Z-I-N-G. Thinly sliced, just the right balance of salty and fatty. It was O-M-G yum!

And since then, I've been pretty much obsessed. I buy it at the store every week. We love adding it to salads, to bruschetta, and pizza. Oh and with eggs? Holy yum. It's pretty much on everything. Some people are obsessed with bacon, I'm obsessed with Proscuitto. So the other day I was watching Food Network – Giada at Home to be precise – and she was making something with Proscuitto. Honestly, I don't even remember the dish, because what she did with the Proscuitto was genius. Rather than slicing the Proscuitto into ribbons, which I usually do, and scattering it on top of the dish, she baked it. She placed it on a baking sheet, popped it into a 400-degree oven for about 5 minutes, and bam. Out came this sensationally crispy Proscuitto. Like bacon bits but better.

I took this approach with this gluten-free multigrain pizza I made last week. I didn't have any starch on hand, so I decided what the heck, I'll just make a starch-free pizza and see how it goes. The texture is definitely denser, but not in a bad way. In more of a “Huh, this tastes pretty darn good for a starch-free pizza crust” kind of way. I was pleasantly surprised.

Although I can't say that this multigrain pizza crust tops my Best Gluten-Free Pizza Crust recipe, it's a nice alternative for someone who wants to eat whole grains and avoid starches. It's got a richer flavor, a deeper golden color and is loaded with healthy flours.

You know, this is getting me thinking…perhaps I need to start experimenting with more starch-free baked goods. Would you want to see them? Let me know what to play around with in the comments below!

Oh, and totally get your pizza on. That's a given. 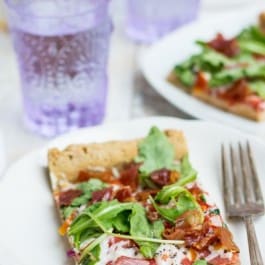