An easy 7 Day Netherlands Itinerary with a printable road trip route. Includes what to see, the best cities to stop in, where to stay and tasty restaurants. 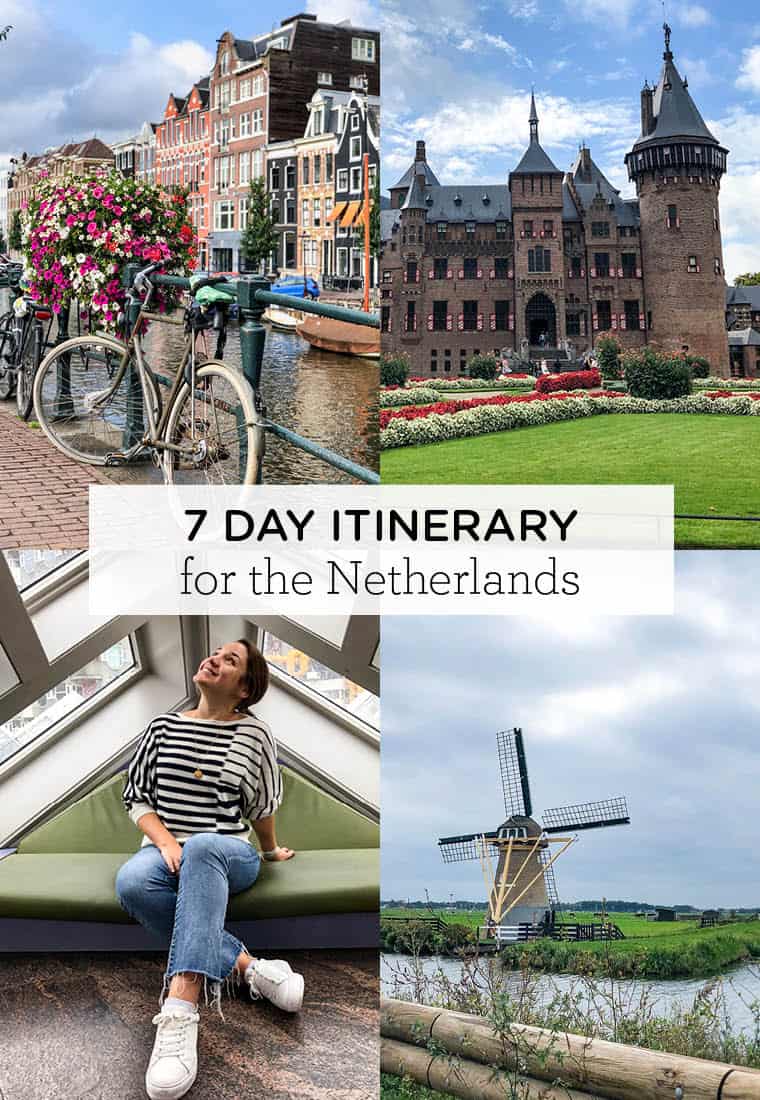 One of the things I've loved most about our trip so far is that it wasn't all planned out. We've kind of been planning a week or two in advance which has helped us have the flexibility to stay longer in a place or go somewhere we wouldn't have thought of. But we've also been able to be a little off the cuff which has been really fun.

The Netherlands for example. We didn't even really think about going there because we'd both been to Amsterdam before. But we found ourselves with a week that didn't have a solid plan so we said to ourselves, “Let's do a road trip through the Netherlands!” And so we did! And it was so fun!

The Netherlands is a really easy country to get around (especially if you have a car) and everything is pretty close, so you can see a lot in a short amount of time. I put this 7 day Netherlands itinerary together for those of you who have a full week, but we did cram all this in in about 5.5 days. Hopefully you have fun exploring like we did! 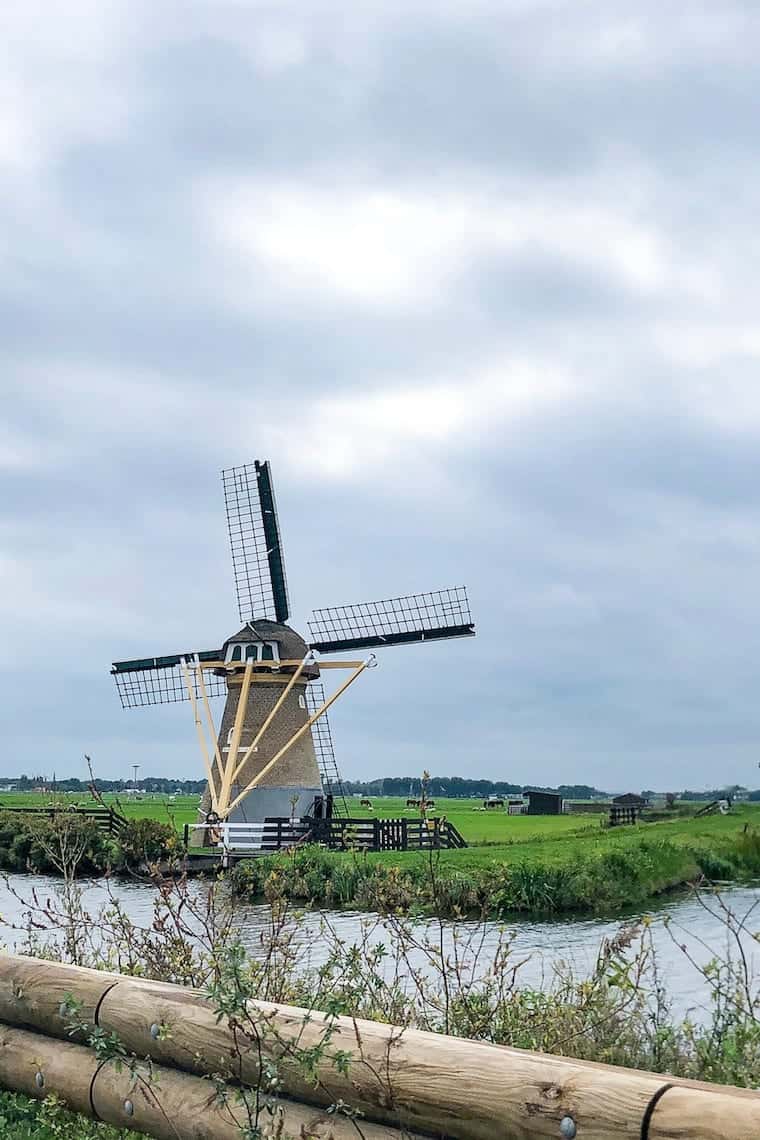 This isn't out exact itinerary because we didn't have quite 7 full days, but I wanted to put together a trip idea that would give you a full week so you wouldn't feel quite as rushed as we did. The Netherlands is a beautiful country, but it's also small so you can cover a lot of ground in 7 days.

There's a lot to see in general, so this 7 day Netherlands itinerary takes us just through the southern and central parts of the country. If you could add a few more days, I think you could also explore the northern part and end up seeing the entire country!

Here are the cities we're hitting on our 7 day Netherlands itinerary:

So… we ready to explore The Netherlands? Let's get into it! 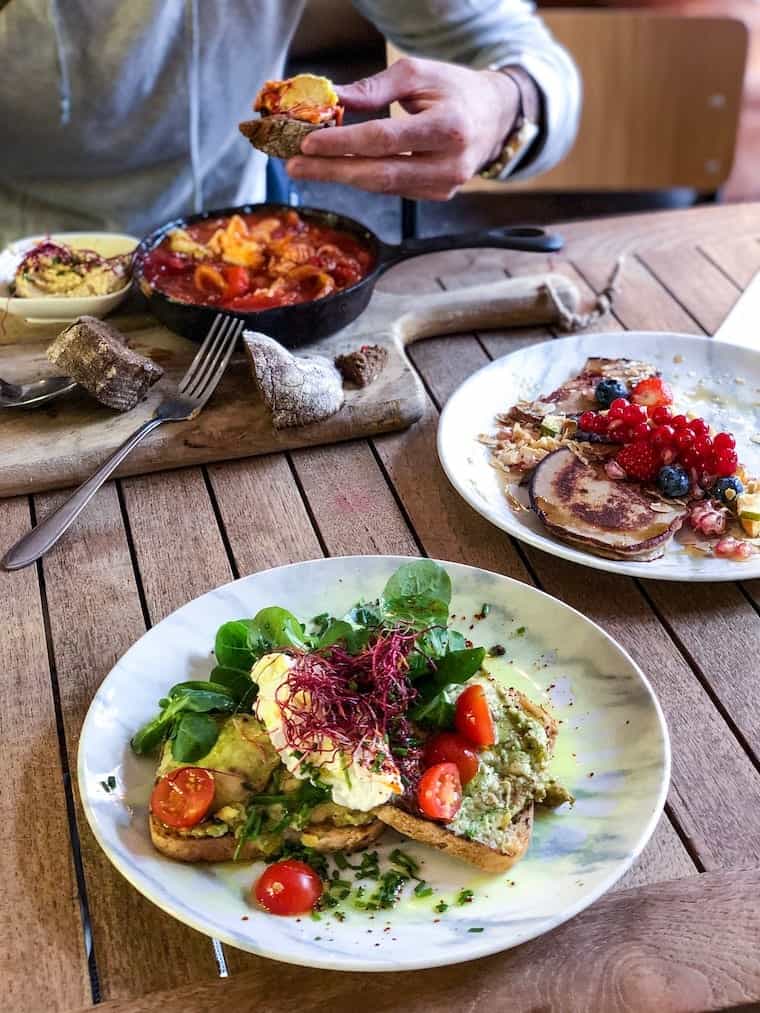 Amsterdam is a really great city with a ton to do, both on the food side, but also culturally. Definitely make sure to check out the major museums – Anne Frank and Van Gogh I think are the two definites!

One of the great things about Amsterdam is that it's fairly small so you can get around really easily by foot. We stayed in the very center area, but you can really stay anywhere within the center area and be accessible to pretty much everything.

Amsterdam is also similar to London in the sense that it has a very eclectic food scene. Lots of ethnic food, lots of healthy food, and surprisingly a lot of vegan places too. There are also tons of juice shops, great coffee shops (like actual coffee), and great shopping.

From what we tried, here are the best healthy restaurants in Amsterdam:

If you want an even more comprehensive list, check out Remy's (@veggiekins) Amsterdam Guide (I pretty much followed it the whole time!). 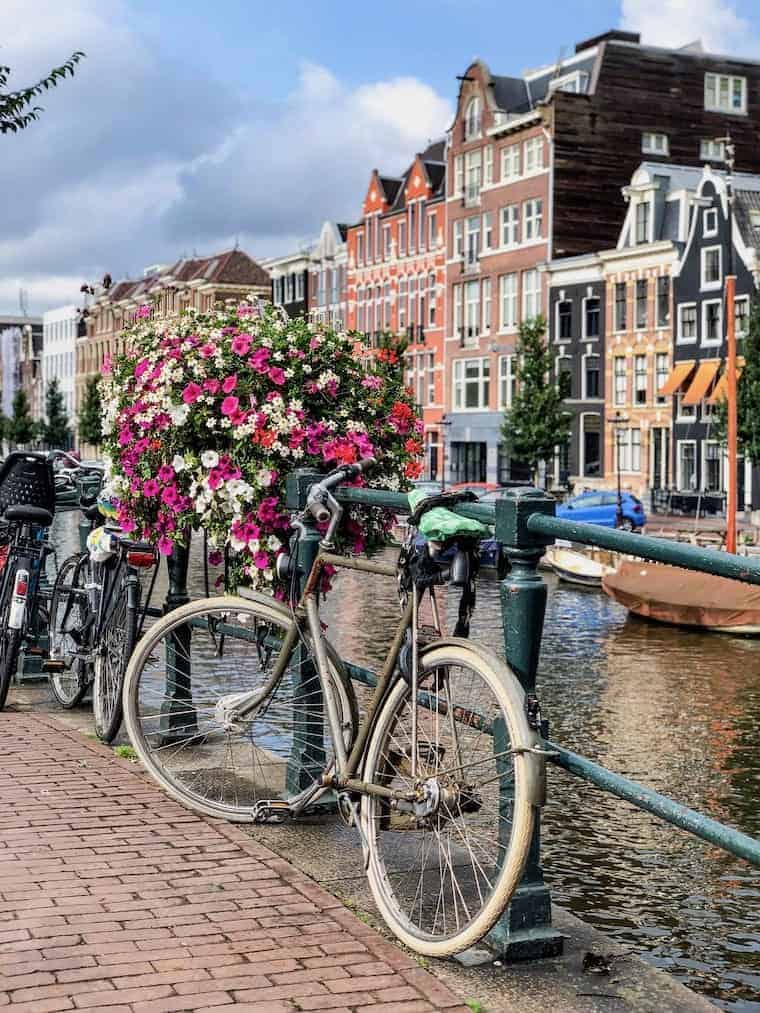 From Amsterdam, the first stop on our road trip is Haarlem. Haarlem is about a 30-minute drive from the city center and is absolutely adorable. It's very shopping focused, with tons of stores, but also has some good restaurants and a gorgeous cathedral. We didn't go into any museums here, but we walked around the city center, had a great lunch (at ______) and did a little shopping.

What I really liked about Haarlem, aside from it being super cute, is that the shopping was more boutiques than you get in most cities. They have the big chains of course, but they also had a lot of smaller stores that carry a blend of brands, with really cool housewares sprinkled in. Best of all? Lots of them are also focused on supporting sustainable, ethical, organic and/or vegan brands too!

Things to do in Haarlem (+ places to eat): 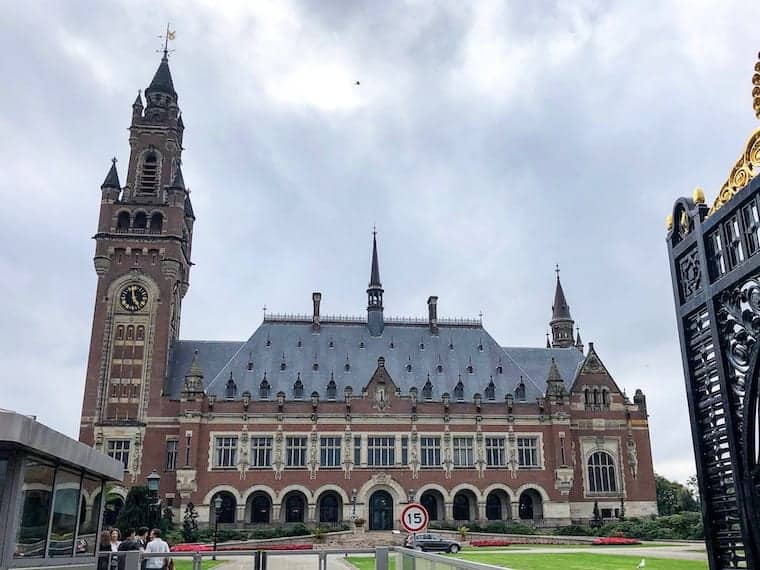 After you've had a few hours in Haarlem, hop back in your car and head down to The Hague. If it's summertime or a bright sunny day, make a quick detour to the beach at Noordwijk. It's a huge beach which isn't too far out of the way and is great for a little walk to stretch your legs and get some nature in!

One we got to The Hague, we started by walking towards the Peach Palace which is super cool. The Peace Palace is the international court of crimes and is a stunning building. We didn't actually take a tour, but you can and I think if we had more time/weren't super hungry, we would have. One of my favorite things though was right outside the gate and is called the Peace Flame and it's this kind of a commemorative “shrine” to world peace. It's a circle of different stones, with one from every country in the world (some countries have more), that surround a “flame”. It was just really powerful!

For dinner, we ate at Giuliano's Ristorante and it was fabulous. They were very accommodating for allergies, had a really cute vibe and the service was excellent! 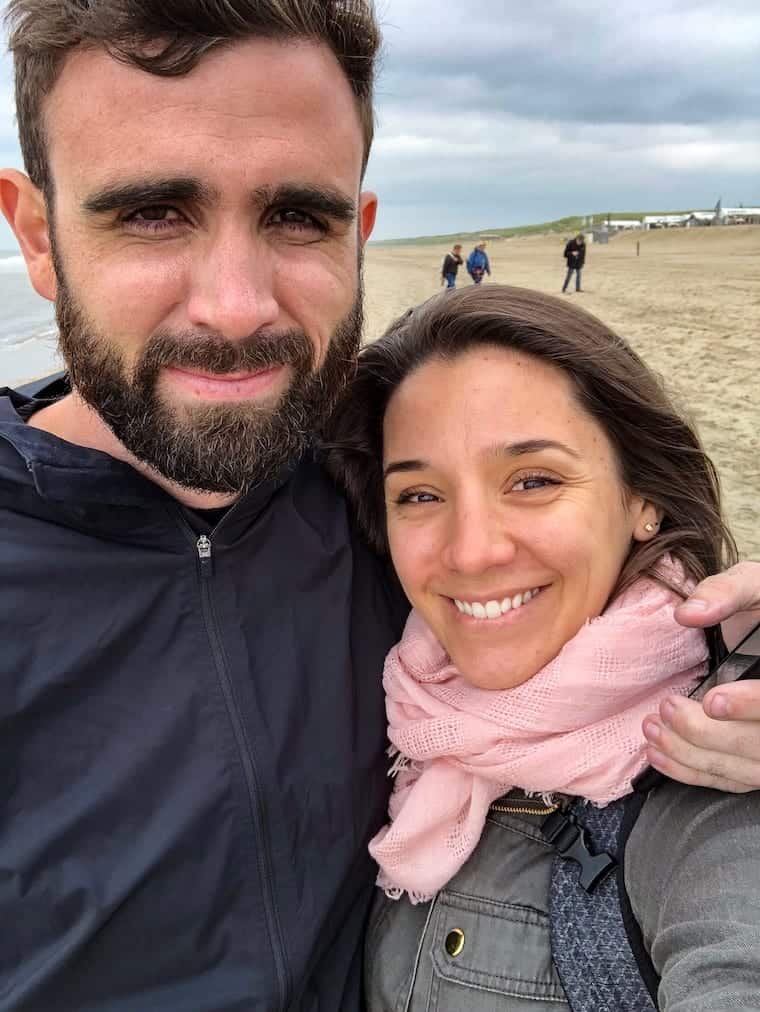 The next morning, we got up and drove to Rotterdam. The weather wasn't great, but we were able to do some exploring. Rotterdam is unlike other cities in the Netherlands – it's not cute and quaint, but instead, it's pretty modern, very busy, and pretty commercial. While the architecture is cool, it definitely isn't my favorite city we saw.

We started with the Central Market which is a massive food hall in this pretty impressive dome-type of building. It's got tons of different food stalls, so go hungry so you can test some things out. It's a scene, but it was cool.

From there, we walked over to the cube houses. Pretty cool to walk through and you can even go into one just so you can see what it might be like to live in them. Next, we just did some exploring – we walked through the “Cool District” which is packed with different shops, but it's was a bit too commercial for my liking.

We got hungry again, so we got some lunch at Spirit and it was fabulous! Probably one of my favorite places in all of the Netherlands! It was fully vegetarian, with tons of vegan options, lots of gluten-free and really tasty food. It's a pay-by-weight type of place with a big hot and cold salad bar. It was exactly what we both wanted!

After lunch, we did more walking around, but it started torrentially raining, so we just went back to the hotel and chilled. We went to dinner at a place that served gf & vegan pizza and it was the perfect way to end our day! 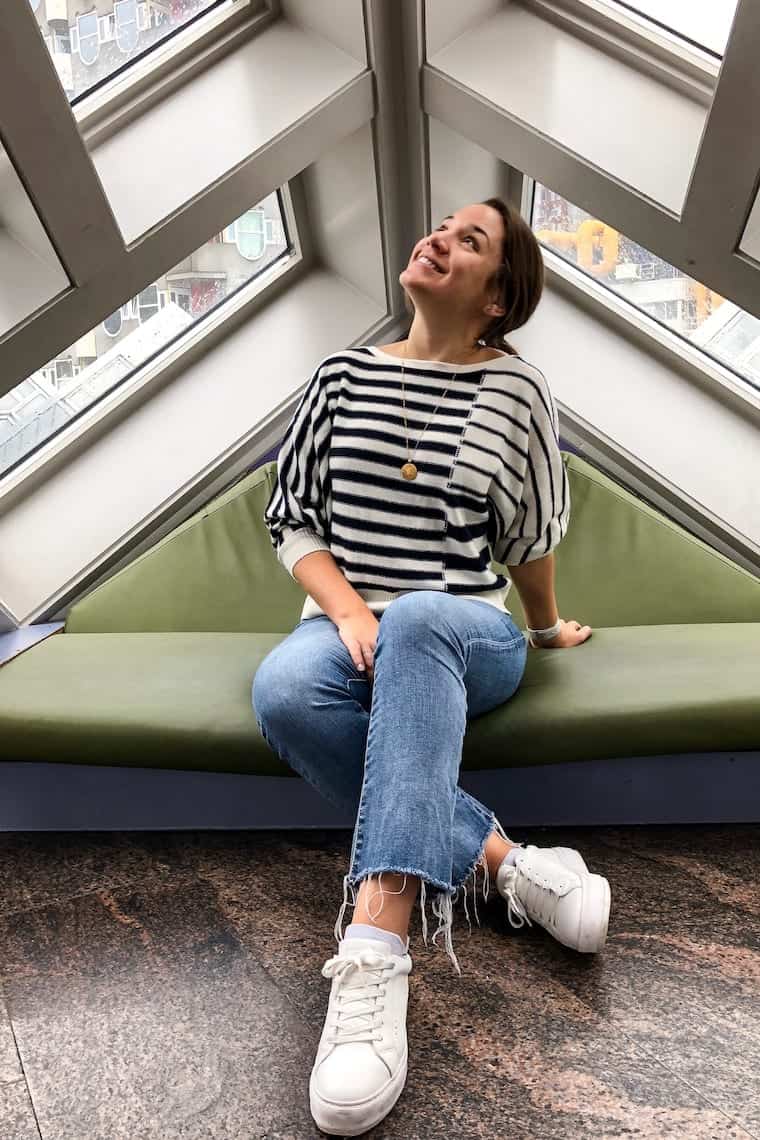 Day 6 in our 7 day Netherlands itinerary, brought us to Eindhoven. I didn't really know what to expect, but we both really liked it! We stayed at Little Grand Hotel and it was perfect. It's an apartment, but with hotel amenities and is attached to a really great restaurant. We dropped our stuff then headed out to explore. Similar to Rotterdam, it's on the modern side in terms of architecture, but I found it to be a bit more charming.

I don't feel like I have a ton of advice about Eindhoven because we didn't actually do a whole lot aside from walking around, but there's a great vibe and some good restaurants! We had some pretty spectacular Eritrean food for dinner! 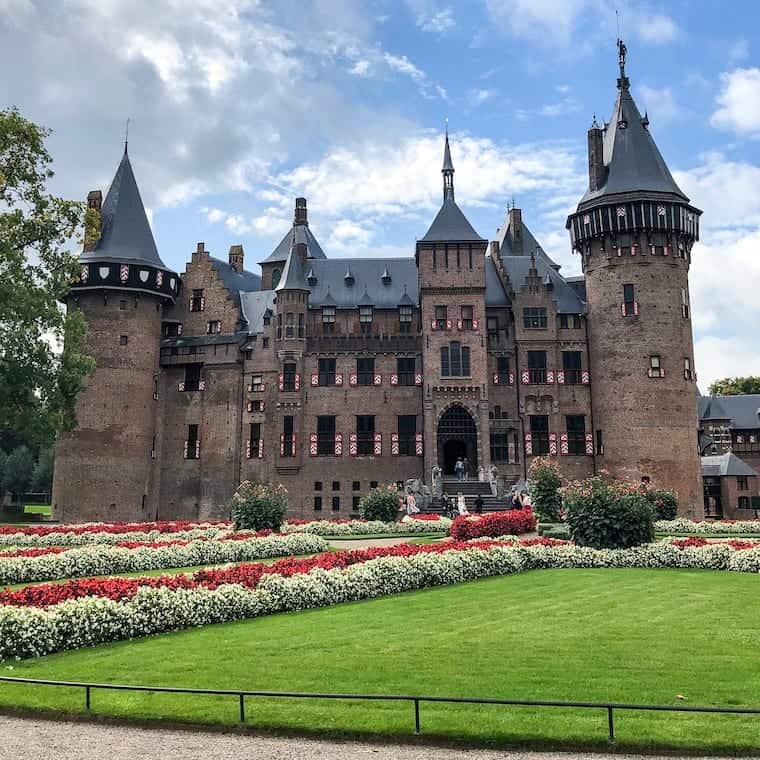 The final day in our 7 day Netherlands itinerary is the small city of Utrecht. Utrecht is about halfway between Eindhoven and Amsterdam and is a great place to end our circle. And it's absolutely adorable! I would say that out of all the towns that we visited Utrecht has the most charm.

We loved wandering around in the old center, we had an amazing vegan meal there and the canals are stunning. It was my second favorite behind The Hague (and Amsterdam). In terms of things to do, it's similar to the others…explore! We just wandered mostly, popped into shops, grabbed coffees, etc. We wanted to go to the main tower, but it was closed for renovations. There's also a cool museum there, but advanced tickets are a must (which we didn't have).

The final recommendation I have for Utrecht is pop back in your car and drive out to the De Haar Castle. It was SO cool and absolutely stunning! You could spend an entire afternoon just explore the gardens and doing a tour. Definitely worth the drive out there and was a highlight for us on this trip!

Things to do in Utrecht:

And finally, you'll end your trip by driving back to Amsterdam! I hope this was helpful and please let me know if you have questions and/or if there are things I should add!

Some Things to Keep in Mind

And that pretty much does it! Have so much fun and be sure to leave a comment if you have any questions ❤️ 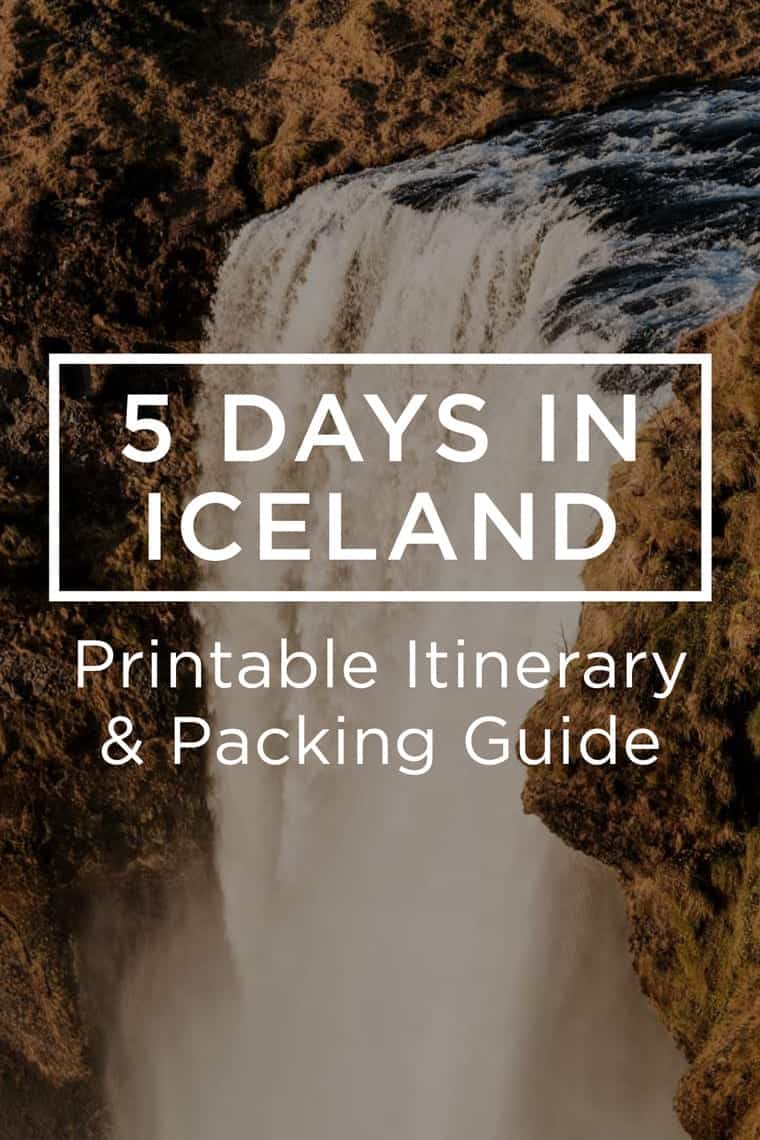