An amazing vegan truffle mac and cheese recipe that's easy to make, creamy and so delicious. This mac and cheese is baked to perfection with a crunchy truffle topping! 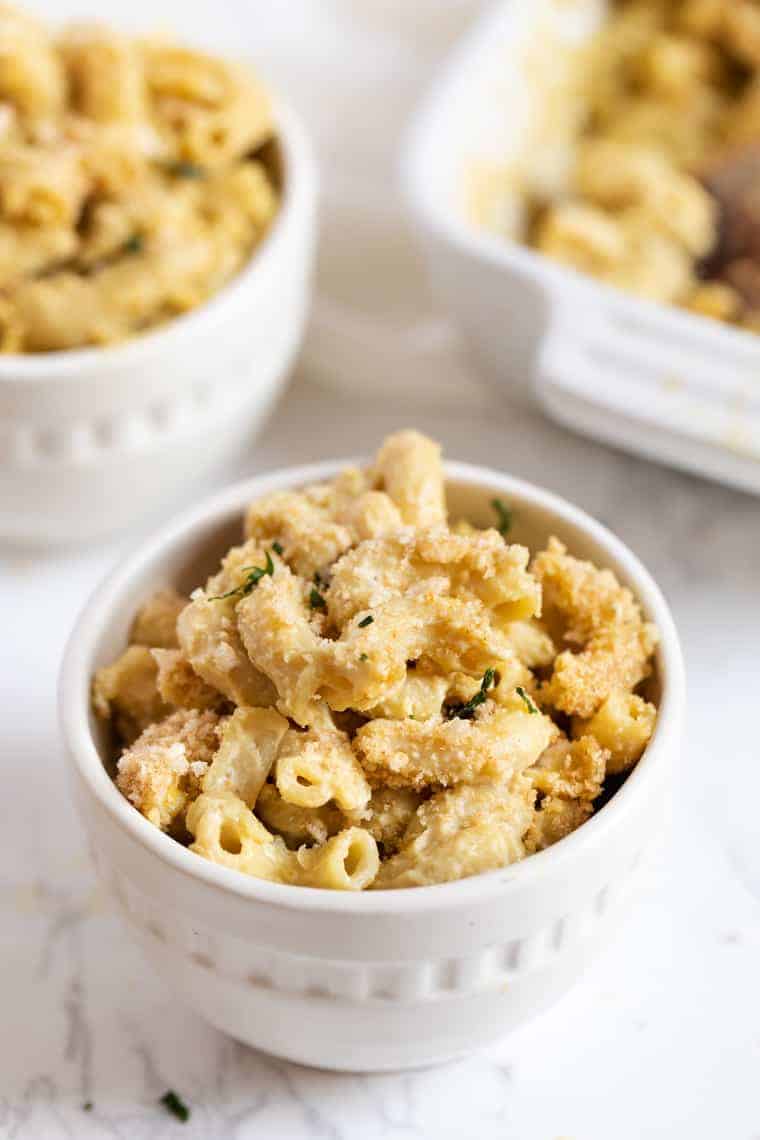 There's nothing more comforting than mac and cheese! It's creamy, it's cozy, it's full of carbs and it's just delicious!

But making vegan mac and cheese is sometimes hit or miss for me. There are a few boxed varieties that I enjoy, but the homemade ones just don't taste like the “real” thing. I mean granted they're skipping out on the actual cheese part, but I'm still a firm believer that you can replicate the traditional recipe and turn it into a dairy-free, vegan version.

And that's exactly what we're doing today! I'm showing you how to make the absolute best vegan truffle mac and cheese. This recipe is super easy to make, it's full of flavor and it's got that fancy little twist at the end: truffles. 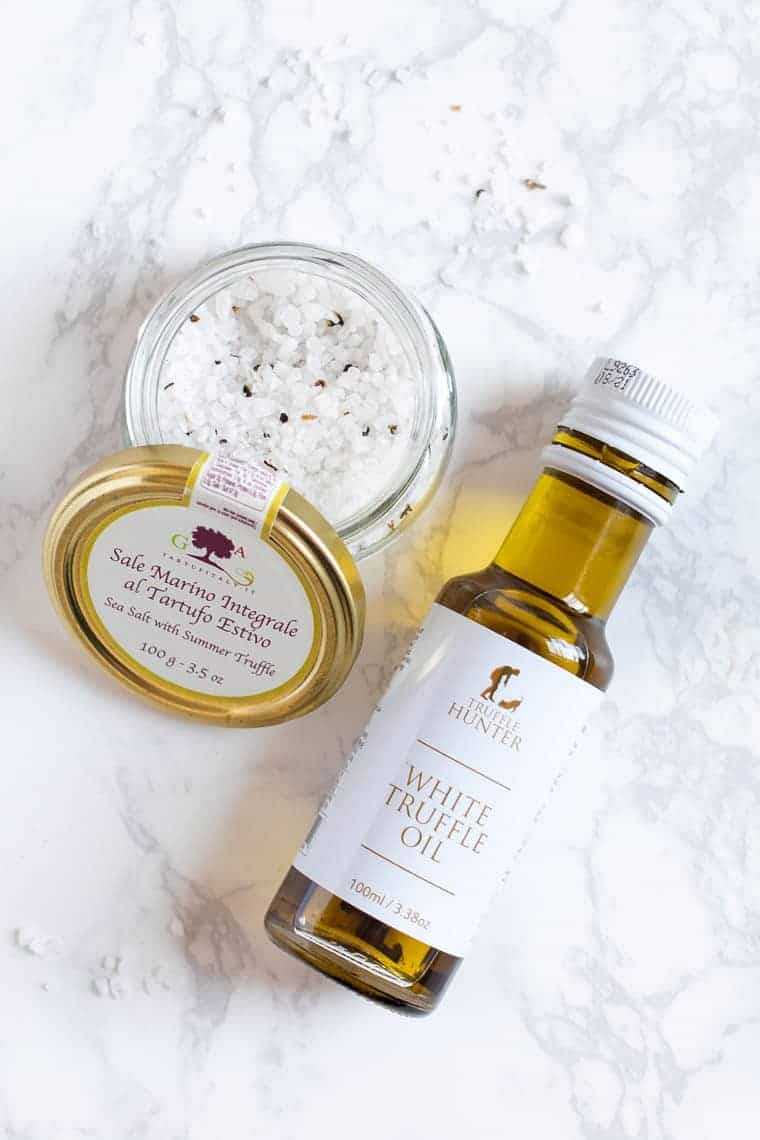 If you're not familiar with truffles, let me share what they are real quick. Truffles are actually part of a fungus that lives underground (kind of like a mushroom), and is technically a tuber. They grow naturally near certain types of trees – like oat and hazelnut – and tend to like a somewhat temperate climate. They come in white and black, which depends on the season as well as the type of tree.

Truffles do grow in the wild, but they can also be cultivated. Here in the US, there are farms in North Carolina, Tennesee, Arkansas, and even Idaho!

A little fun fact: the breed of dog that Trevi is (Lagotto Romagnolo), are bred in Italy to hunt for truffles! We haven't trained her obviously but did meet some in Italy that were!

Truffles have been described as the “diamond of the kitchen” by some chefs. Partly because they're rare (which makes them expensive), but also because of their flavor. There is nothing else I have ever tasted that is similar to truffles.

I would describe their flavor as earthy, musky, and kind of nutty at the same time. They are quite strong, so a little goes a long way and typically they're used fresh to preserve that flavor. Essentially they taste exactly how they smell! 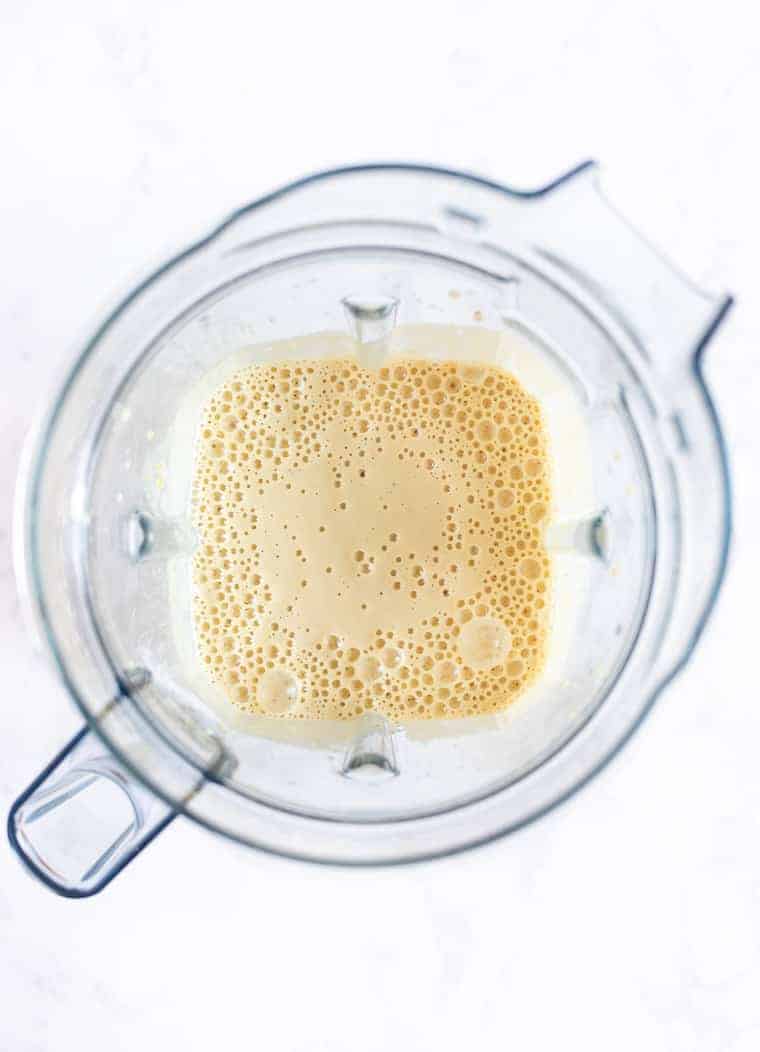 For this recipe, we're using two types of truffles and we're using it in a few different places. First, is in the sauce.

My favorite way to make vegan cheese sauce is with cashews. We've talked about this a million times before, but essentially we start by soaking the cashews first. Then we blend them up with the rest of our ingredients and that's our sauce. The cashews are creamy, they easily take and they're the perfect base for vegan cream sauce.

Types of Truffles in this Recipe

As I said, we're using two types of truffles in this dish: truffle salt and truffle oil.

The truffle salt we actually purchased in Italy, but you can definitely find it online. It's essentially just sea salt mixed with dried black truffles. Truffle oil is olive oil that has been infused with truffle. You can also find this online! Just know that anything with real truffle is going to be pricey, so if the price sounds too good to be true, it probably is! 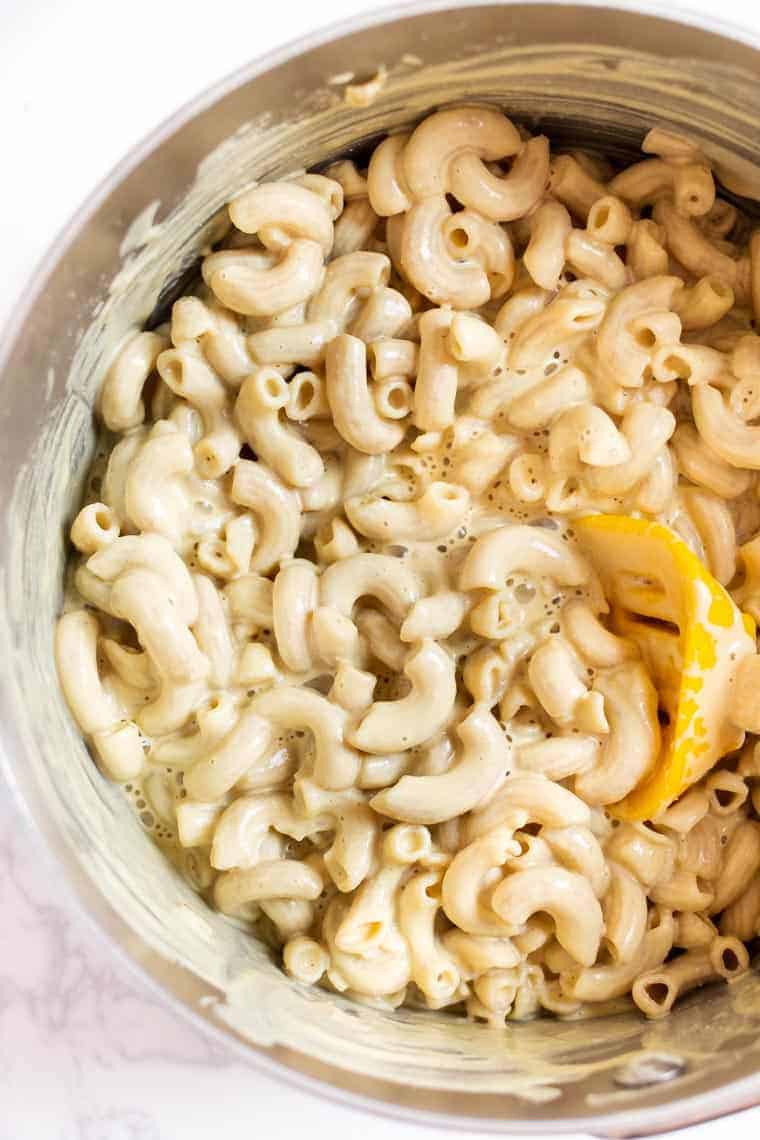 Our vegan mac and cheese today as three different components: the sauce, the pasta, and the topping. So in addition to the truffle, we've only got a few other simple ingredients.

Here's what we're using for our vegan cream sauce:

And then we have our pasta – I used gluten-free brown rice elbows – and our topping! 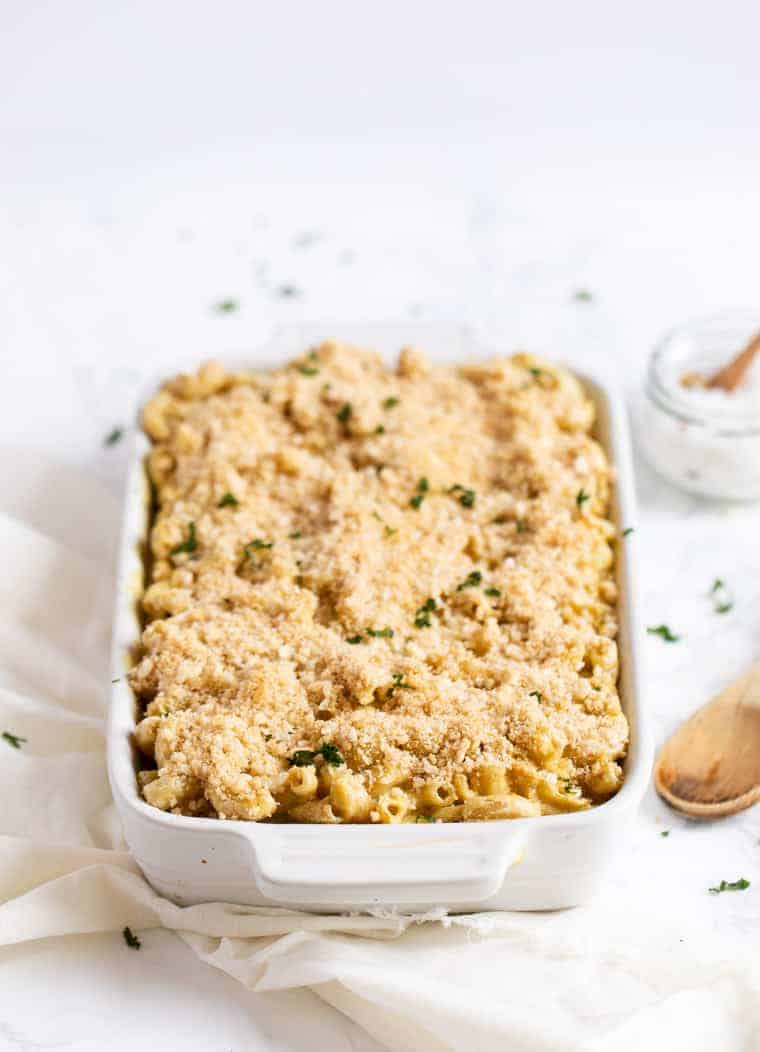 How to Make Vegan Mac and Cheese

While the ingredient list might seem a little daunting, this recipe is actually super easy to make. It only involves four steps!

Make your sauce! And all we need to do is just add all the sauce ingredients into a blender and blend it up. The longest part here is just allowing time for your cashews to soak.

Cook the pasta! What's great about mac and cheese is you can really use any type of pasta you want (well maybe aside from spaghetti or linguine). I chose elbows because it's classic, but this would also work with penne, bowties, etc. And you can also use whatever kind of pasta you want – gluten-free, regular, chickpea, etc.

Make your topping! We're using a substitution for panko breadcrumbs that I've found to work really well. We mix that with a little truffle salt and oil and call it a day. So tasty!

Bake it up! Our final step is just to bake it until it's hot. Since everything is pretty much done, the mac and cheese only needs about 25 minutes in the oven. 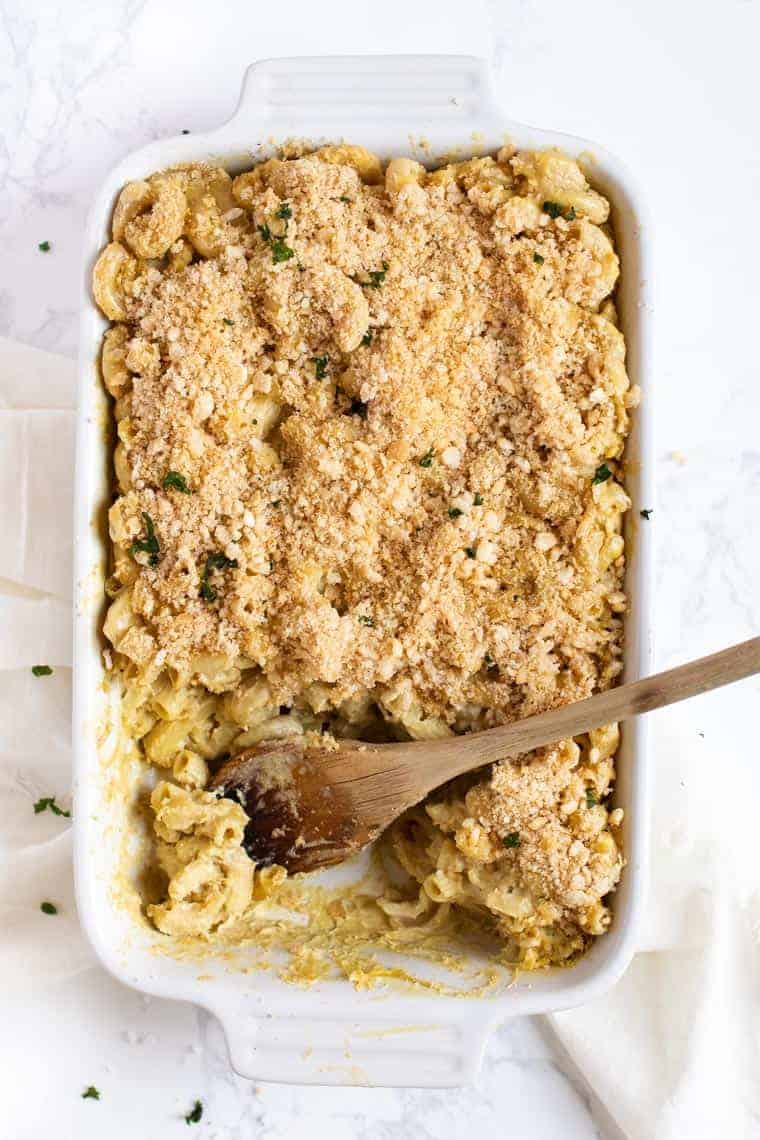 Now I've been dancing around the topping this whole post, so let's talk about it!

All that being said, I have the perfect gluten-free substitute for panko breadcrumbs: RICE CRISPY CEREAL!

I simply take the rice crispy cereal, crush it up on a cutting board and it so closely resembles panko. It's super crunchy, it's easy to work with, it's really affordable and it works. And it's awesome in this vegan truffle mac and cheese! 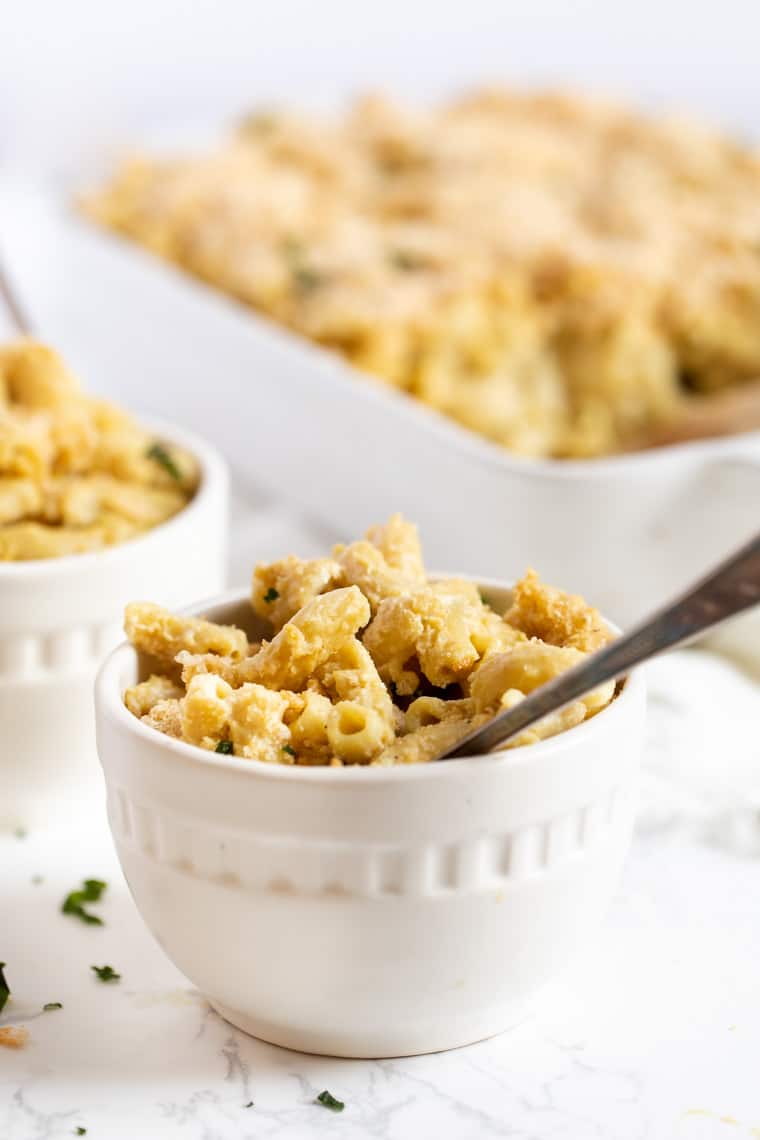 Before you dash off and make this amazing recipe, let me just give you a few quick tips for storing it. Mac and cheese is definitely one of those meals that can be used for meal prep, so here are my suggestions:

And that's pretty much it! I hope you love this recipe as much as we did. It's creamy, it's cheesy and it's so so good! 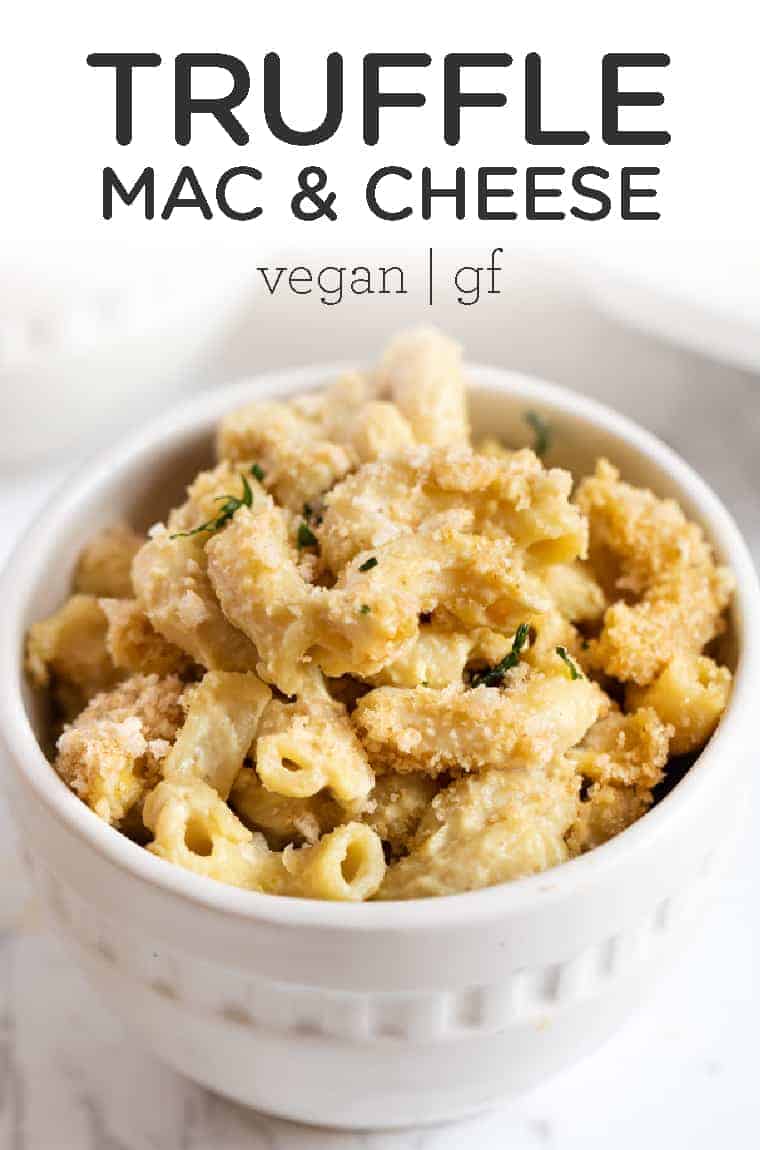 Other Vegan Mac and Cheese Recipes 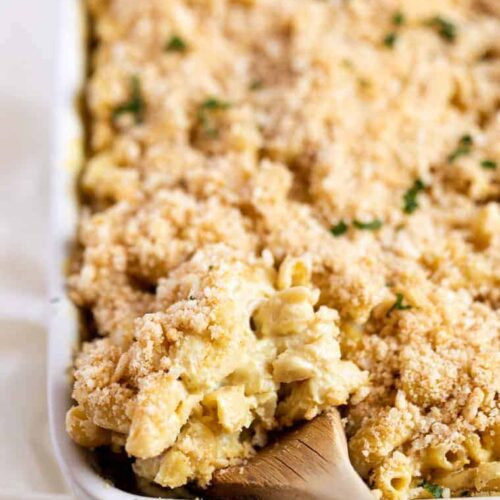 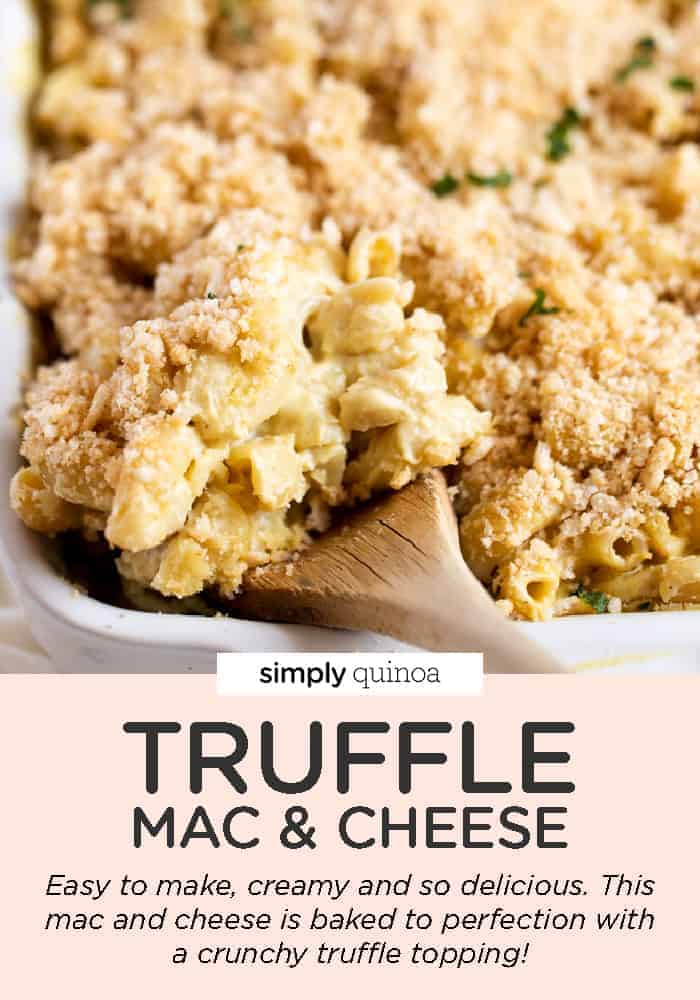 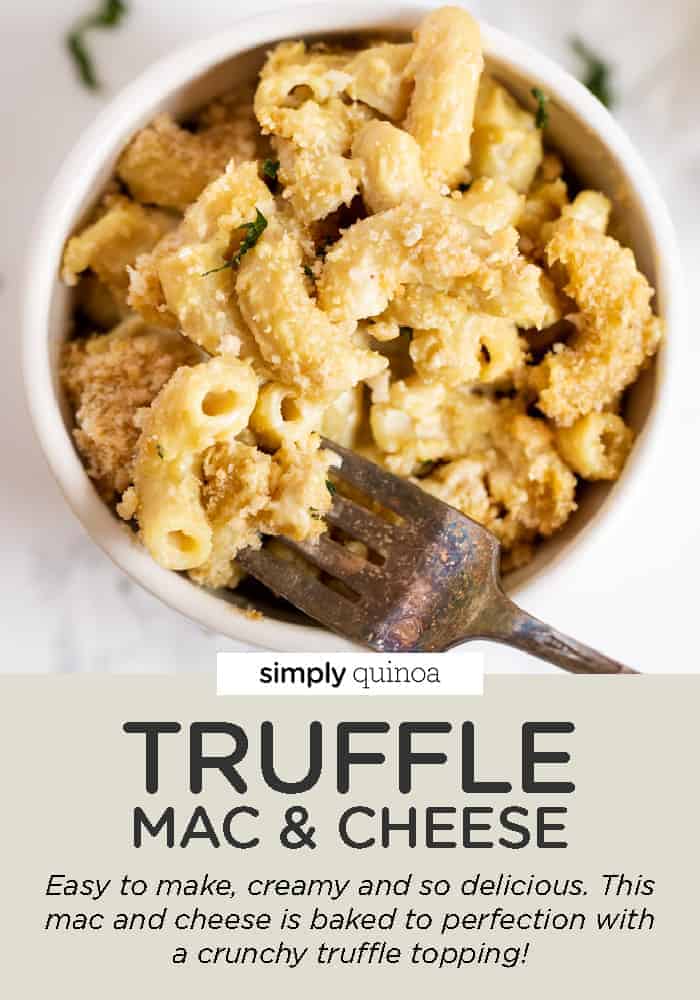 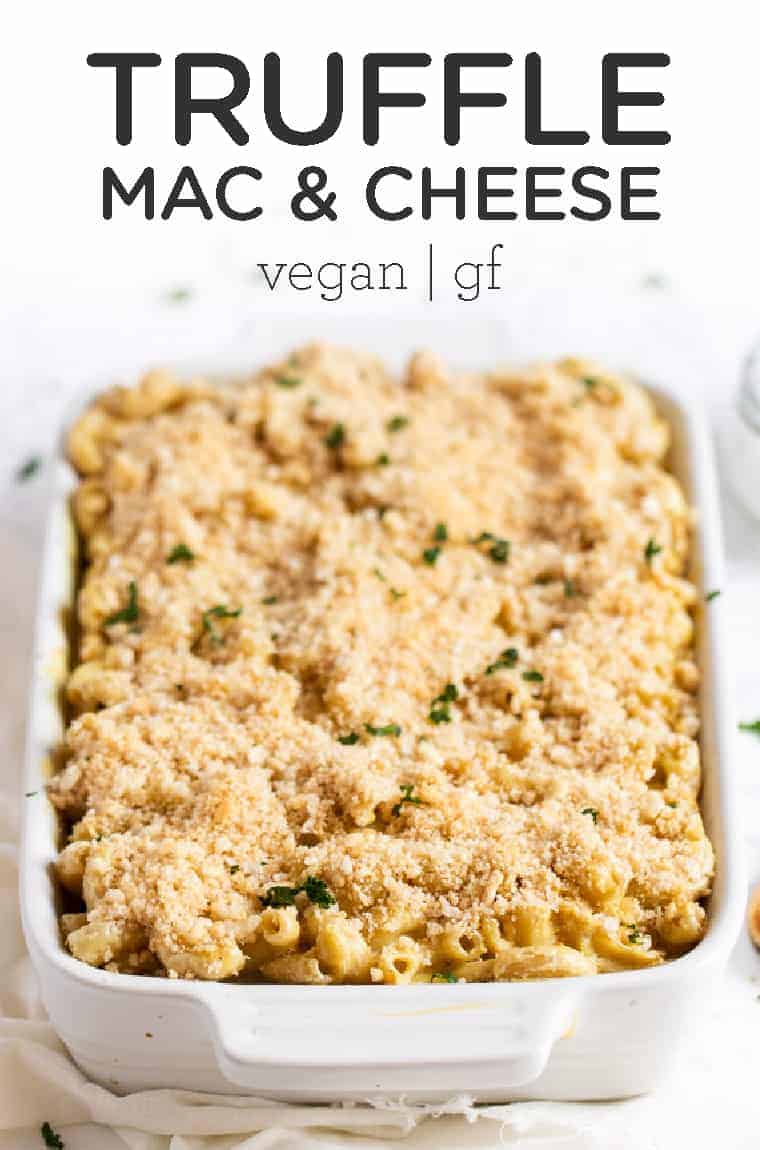