These Gluten-Free and Vegan Brownies are as fudgy, dense, and the right amount of decadent. Loaded with chocolate chips and walnuts, they have the perfect texture.

There's almost nothing more comforting than a perfect brownie.

One that's dense and gooey, chocolatey (but not too much), and with a crackly top. Is your mouth watering just picturing that? Mine is.

But classic brownies, while delicious, aren't so allergy-friendly. They're made with ingredients like butter, flour, and eggs.

So if you've been someone who is on the hunt for the perfect (and I mean PERRRFECT) gluten-free vegan brownie, this recipe is for you. These treats are super easy to make with one mixing bowl and a few simple ingredients.

And I promise, no one will guess they're gluten-free and vegan!

Here's what you need for these fudgy gluten-free brownies:

How to Make Gluten-Free Brownies

This is an easy one-bowl baking recipe. All you'll need is:

Melt the butter. Either melt the vegan butter in a large mixing bowl in the microwave or over a pot of simmering water on the stove.

Stir in the sugar. When the butter is melted, add the coconut sugar and stir until the sugar is fully dissolved.

Fold in the wet ingredients. Next add the milk, flax egg, and vanilla. Stir until uniform. Now you're ready to add the dry ingredients.

Mix in the dry ingredients. Add the flour, cocoa powder, baking powder, and salt. Stir until the vegan brownie batter is combined.

Add your mix-ins. Then add the chocolate chips and walnuts and gently fold them in. Pour the batter into your parchment-lined baking pan.

Bake them up! Bake the brownies until they're set in the center, about 25 to 30 minutes. The top will be golden brown, but the inside will still be a bit gooey.

If you don't have every ingredient on the list, here are a few simple swaps so you can still whip up the best vegan brownies:

To store leftovers, keep them in an airtight container in the fridge for up to four days.

For longer storage, keep them in the freezer for up to six months. When you're ready to serve, let the brownies come to room temperature for about 30 minutes.

If you make these Gluten-Free and Vegan Brownies, be sure to let me know what you think with a comment below! 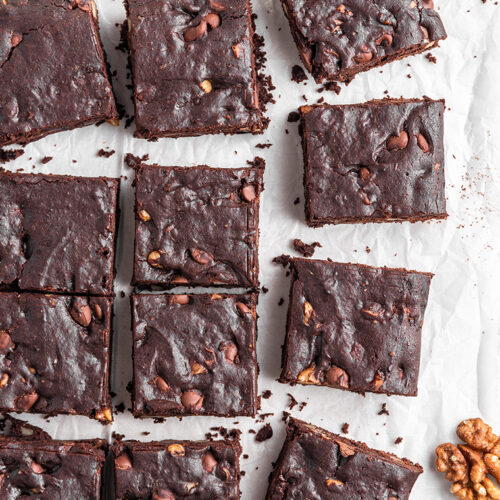