This warming Vegan Apple Crisp with Pears & Quinoa is the perfect homemade holiday dessert recipe. With a crumbly oat and quinoa topping, this refined sugar-free treat is a healthier version of your favorite all-American treat that has all the flavor and sweetness you love.

Everyone loves apples, right? They're one of those fruits that can be easily transformed from breakfast, snack, dessert, or even used in savory recipes. They're versatile and healthy, and they're one of my absolute favorites. I love starting my day with my apple cinnamon breakfast quinoa and you'll also often find me adding apples to my salads and soups! 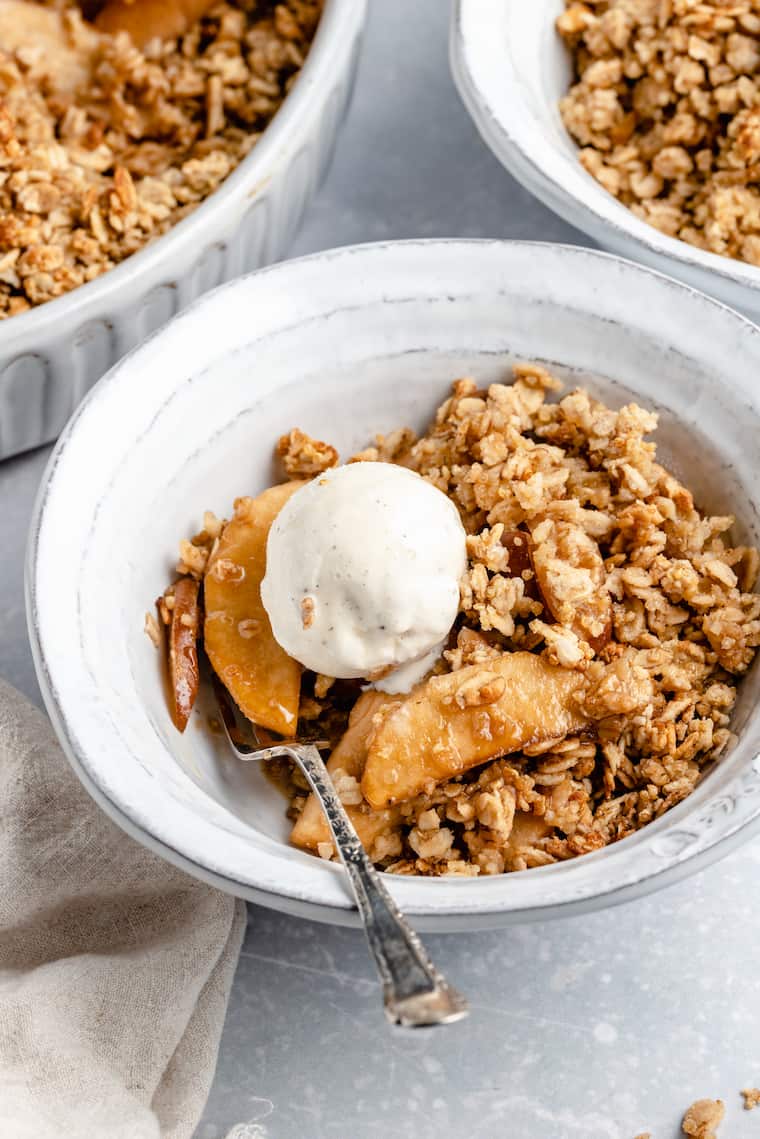 It's December! That probably means that there are a lot of sweets coming your way in the next few weeks. This easy wintertime dessert recipe is a healthy answer to sugar-overload. Lightly sweetened with coconut sugar, maple syrup, and seasonal fruit, this crisp satisfies your sweet tooth without going overboard. Of course, adding the occasional salad can help keep things light too!

Once you try this naturally gluten-free apple crisp with pears, I think you might see why it's one of my all-time favorite desserts. All that's missing is a scoop of your favorite plant-based ice cream. 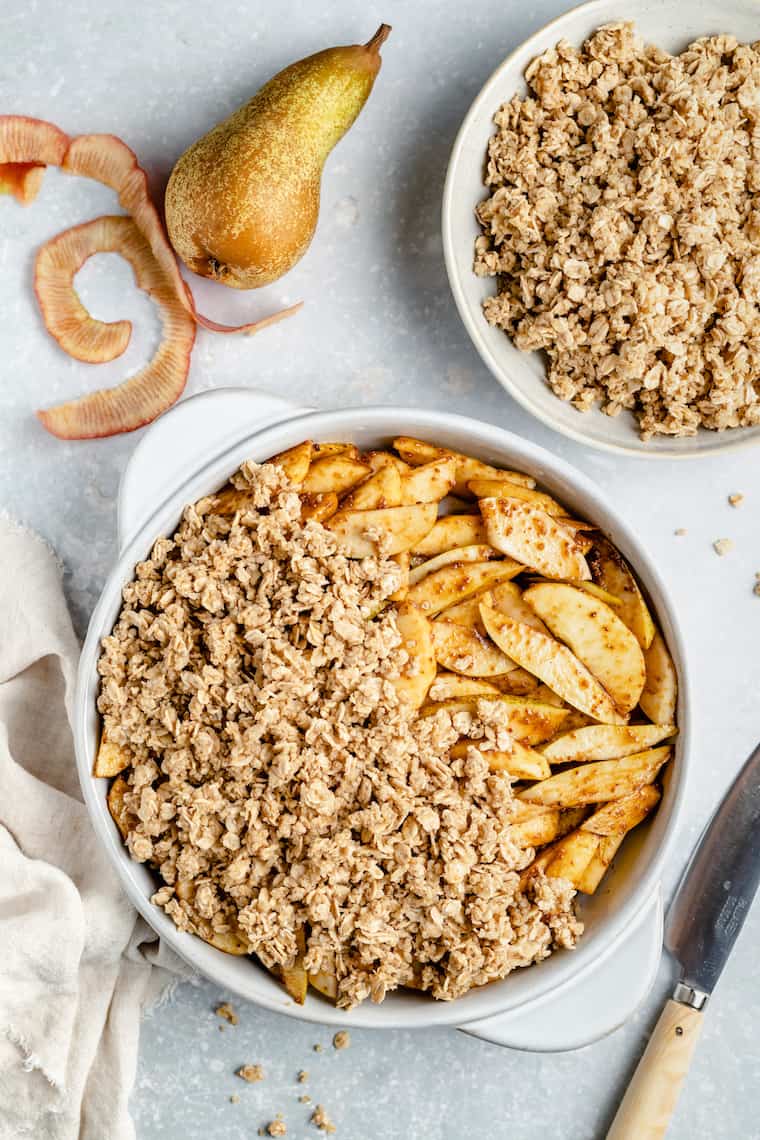 How to Make a Healthy Apple Crisp

Apple crisp is one of the easiest baked desserts you can make. This recipe is especially perfect for new bakers or anyone looking to try out gluten-free or vegan baking. With just 10 simple ingredients and a pie plate, you can make a decadent, healthy apple pie that's packed with flavors of the season. Plus, your entire house will be filled with the mouthwatering smell of caramelizing apples and pears.

Instead of classic butter- and sugar-drenched crisp, my version is simpler, lighter, and healthier. As a result, you can taste the bold flavors of ripe apples and pears in every bite.

Can Apple Crisp be Made with Vegan Butter?

I make my vegan apple crisp with coconut oil. It solidifies at room temperature so your oat topping stays nice and crumbly. However, if you prefer the taste of vegan butter, you can certainly swap the coconut oil for your favorite dairy-free butter brand. Use softened butter for best results. The best part about this lighter apple crisp recipe is that you really don't need much fat. 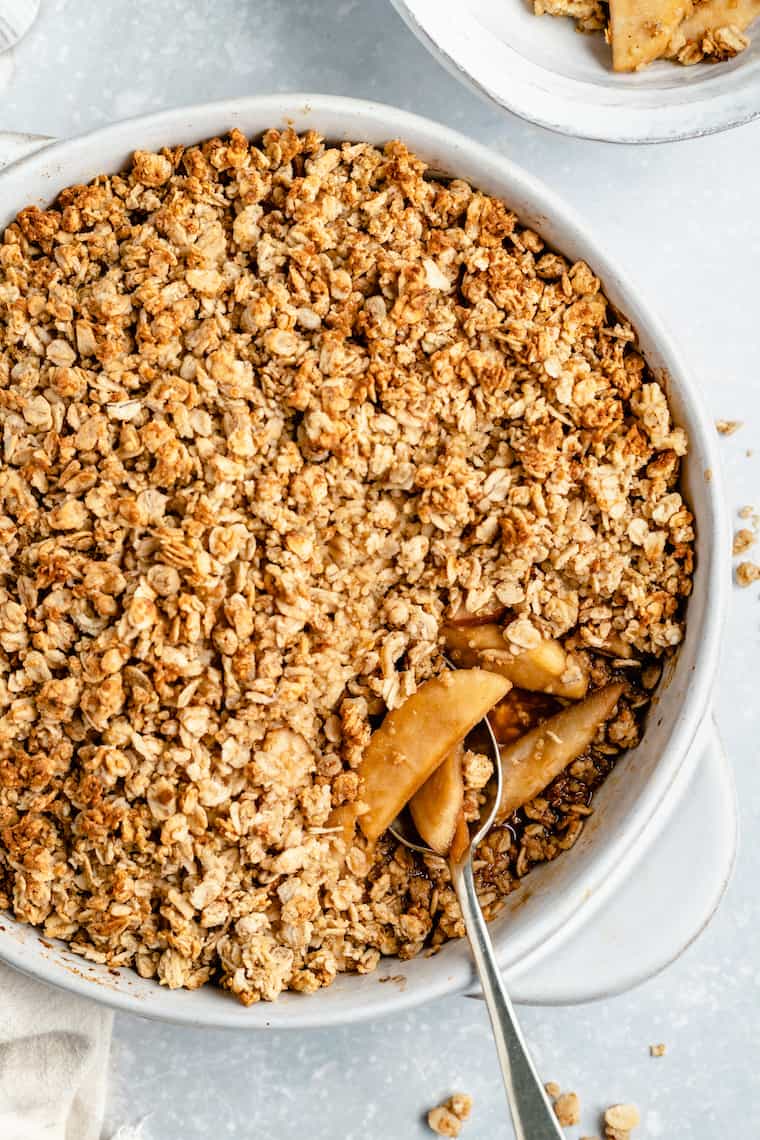 How to Serve Vegan Apple Crisp?

While technically a dessert, this crisp is so healthy that I love it for breakfast! You can serve it chilled, warm, or at room temperature. For dessert, I always top my apple crisp with plenty of vanilla ice cream. You could also add a drizzle of dairy-free creamer for a similar effect that's not quite as sweet. 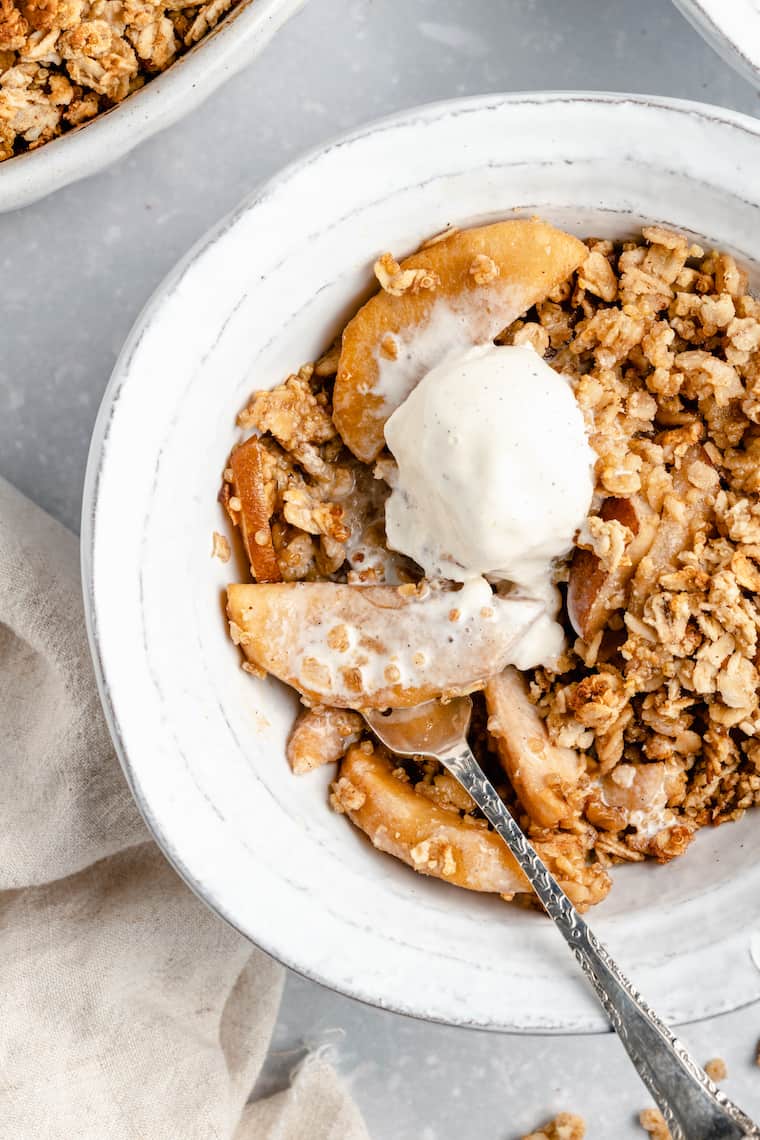 If you end up with leftovers, there are a few ways to store apple crisp so you can keep enjoying it, morning, noon, and night.

Does Apple Crisp Need to Be Refrigerated? If you plan to finish leftover vegan apple crisp within 5 days, store it in an airtight container in the fridge.

Can You Freeze Apple Crisp? Absolutely. To freeze cooked crisp, make sure the crisp cools fully to room temperature. Cover it well and freeze for up to 3 months. You can even freeze unbaked apple crisp in the same way.  To reheat after freezing, thaw the crisp on the counter for a few hours or in the fridge overnight. Then warm cooked crisp in a 350°F oven until hot. Cover it with aluminum foil to keep it from drying out. For uncooked crisp, cook according to the instructions in the recipe below! 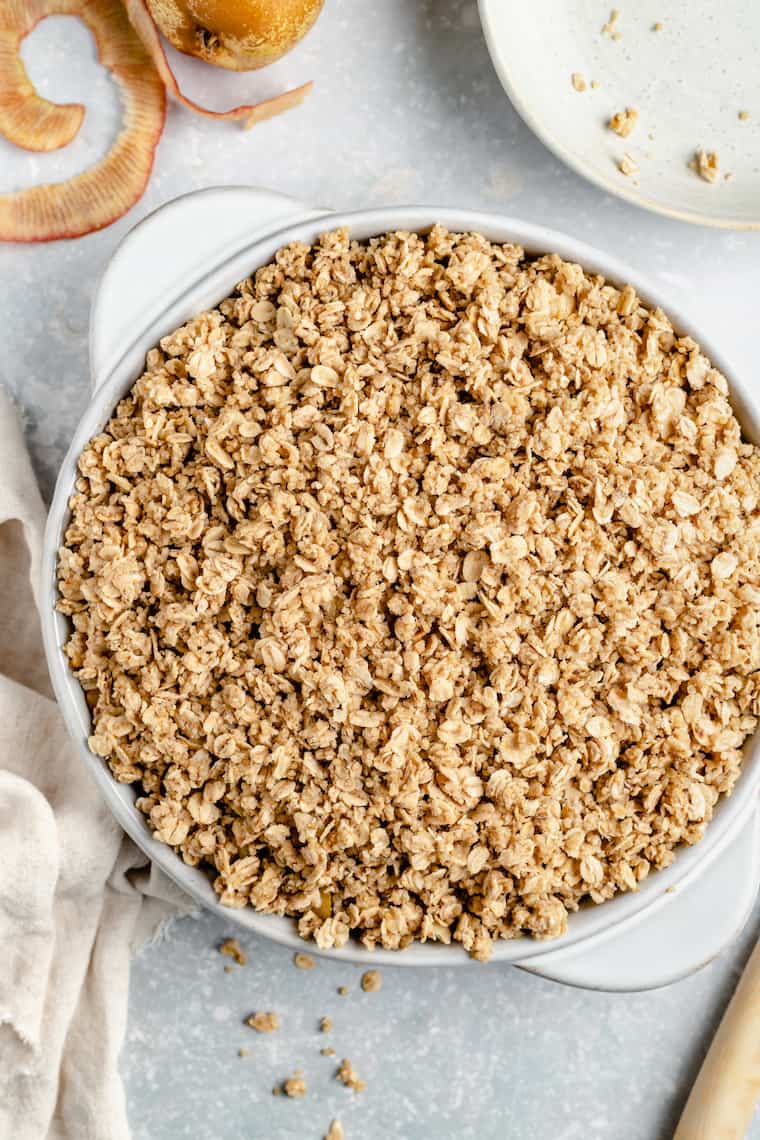 If you fall in love with this healthy apple crisp recipe, then give these other lighter desserts a try next: