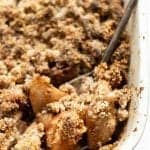 This gluten-free apple crisp recipe is packed with the comforting flavors of cinnamon and apples, and has a mouth-watering, crunchy topping. Plus, it’s 100% vegan!

Apple crisp is a fall classic for a reason. The soft, stewed apples that melt in your mouth are beautifully contrasted by the crunchy topping. It’s easy to make, warm, and comforting. And the aroma of apples and cinnamon baking in your oven makes your home smell like an autumn candle.

But despite apples being the main ingredient, most crisps are pretty unhealthy. So I came up with this healthier version, which is both vegan and gluten-free. With dates, pecans, coconut, and maple syrup in the crispy topping, this gluten-free apple crisp is not only a healthy dessert, but bursting with fall flavors.

I recommend serving this juicy fall dessert with a scoop of dairy-free black raspberry ice cream, or a dollop of coconut whipped cream on top.

Make sure to scroll to the gluten-free apple crisp recipe card at the bottom of the page to see the exact amounts for each ingredient.

What Kind of Apples Are Best for This Recipe?

If possible, you should also use baking apples for this vegan apple crisp. Baking apples are firmer, and hold their texture well in the oven instead of getting mealy or mushy. Granny smith, golden delicious, and honeycrisp apples are all great choices for this recipe.

How to Make Gluten-Free Apple Crisp

This is a very straightforward recipe, and only takes 55 minutes to make. Here’s how to do it.

Here are a few pointers for making this apple crisp.

This gluten-free apple crisp will last in the fridge for 3 days in an airtight container. You can reheat it in the microwave until it reaches your desired temperature.

Can Gluten-Free Apple Crisp Be Frozen?

Yes! You can freeze this crisp in an airtight container for up to a month. Reheat it directly out of the freezer. 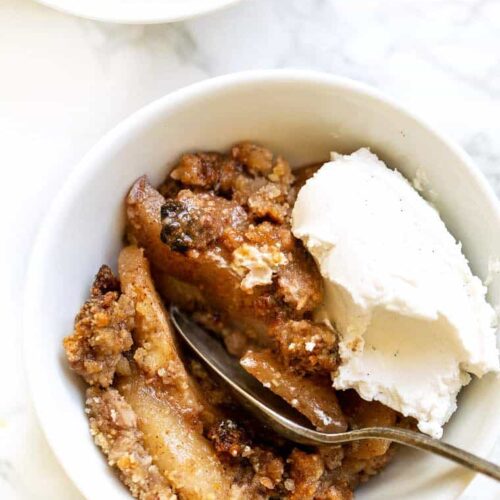 Store in an airtight container in the fridge for up to 3 days, or in the freezer for up to 1 month. Reheat in the microwave or the oven.