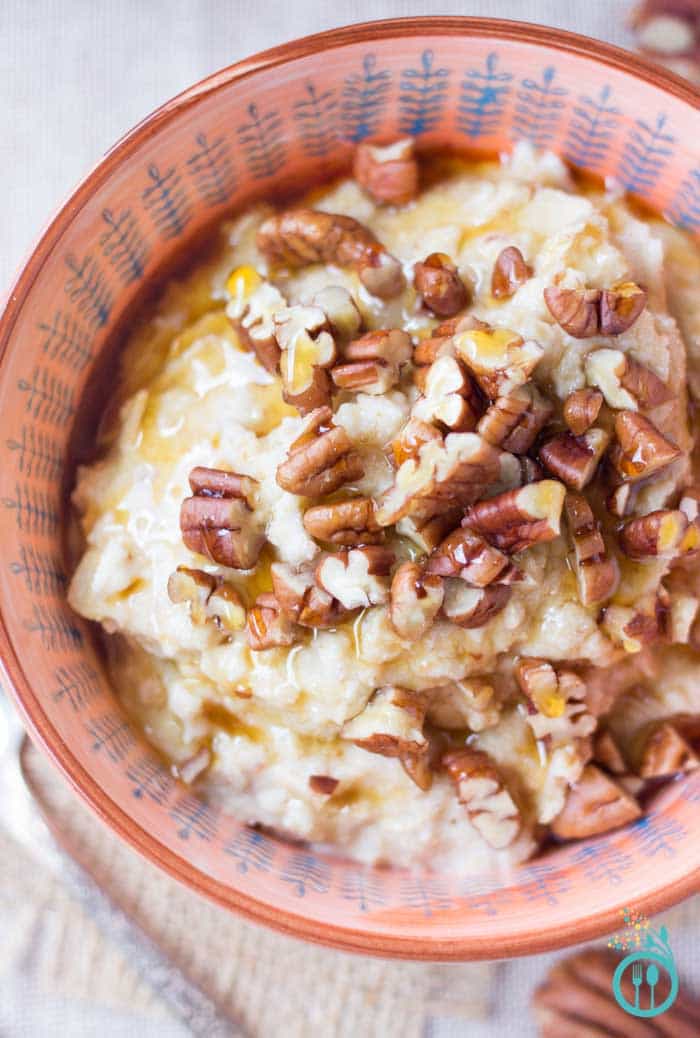 Seriously. I'm totally hooked. My obsession has taken me from cookies, to muffins, to quick breads, to pancakes and now to a warm, healthy quinoa breakfast bowl. They've all been awesome, but this one is the real deal. 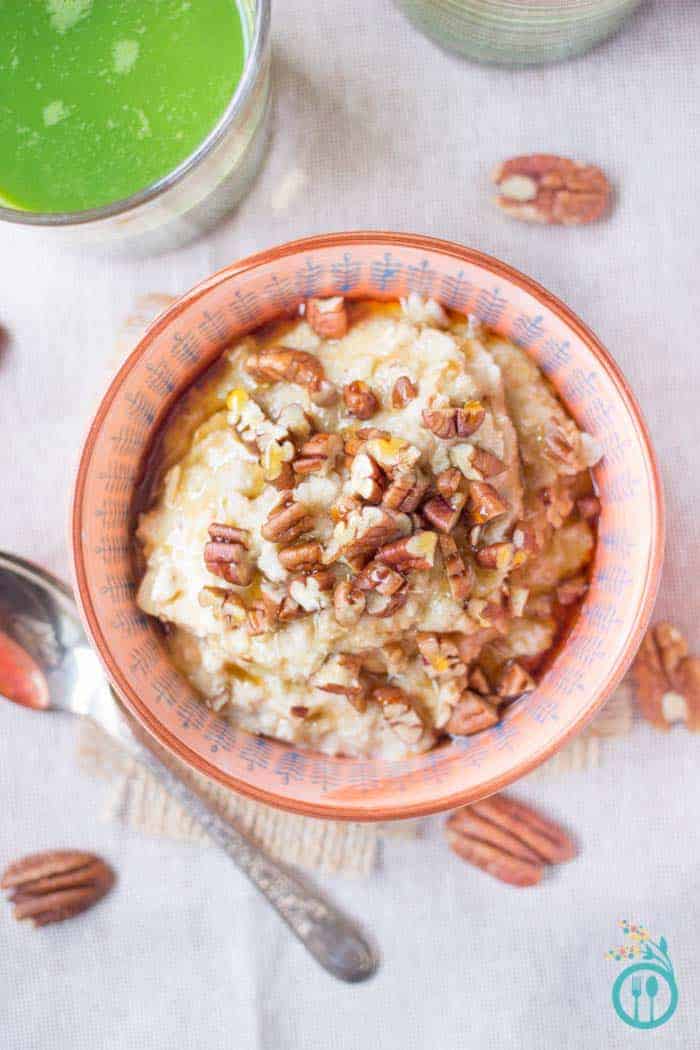 I've always loved starting my day with something on the sweeter side. You know my routine typically is just a green smoothie, but as winter has fallen, I just can't seem to bring myself to drink an icy cold beverage each morning.

See my mornings begin with our puppy. No alarm clock, just the scratching sound of her pawing at her crate and her faint whimpers to come up on the bed. I can almost guarantee that it's still dark outside. And she certainly doesn't care if it's the weekend. She's up, ready to go, whether we like it or not.

As soon as we're out of bed, it's walk time. In the summer that's fine by me (exercise shorts and a cute tank are pretty much my standard attire) but this time of year that morning walk means layer, after layer, after layer. By the time we get back to the apartment, a smoothie is the absolute farthest thing from my mind. I'm cold, I'm tired and all I want to do is put my PJs back on and climb back into bed.

But I'm awake and I'm terrible at going back to sleep (ahem…thanks Instagram).

So I've resorted to a childhood comfort food: oatmeal. 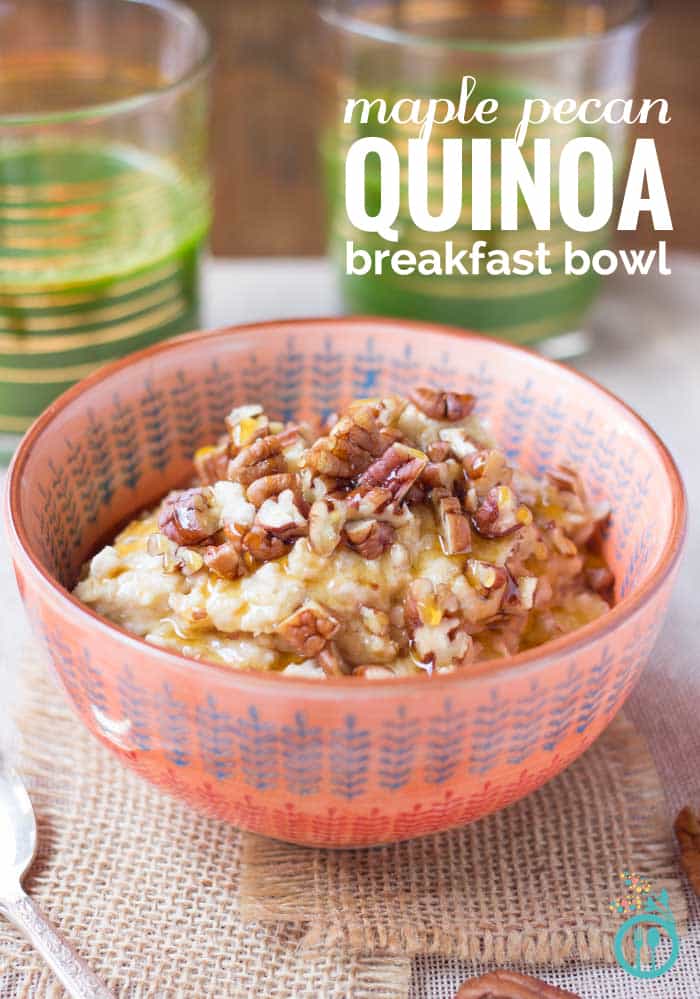 But rather than just the standard recipe of oatmeal and water, I've come up with a version that not only cuts down on some of the carbohydrates and calories, but also pumps up the fiber and the protein.  If you thought oatmeal was the perfect breakfast before, just wait until you have a bowl of this.

The base of this quinoa breakfast bowl combination of certified gluten-free oats and quinoa flakes. Both provide a high amount of fiber, but since quinoa flakes are complex carbohydrates, they digest more slowly and help to keep you fuller for even longer.

But wait…there's more! *insert image of me in an infomercial*

You see I'm a big fan of oatmeal that's on the thicker side. I like it rich, creamy and even though it's a total mental thing, I feel like I'm more full when my oatmeal is thick vs. runny. Whatever, I'm weird, but I swear it's true. *maybe*

I decided I wanted to try and reduce the amount of the oat-quinoa flake mixture in this breakfast bowl the lower the carb amount, but I didn't want to skimp on the volume – hello hangry by 10am –  so I added in a few tablespoons of coconut flour.

Initially I thought it was just going to help thicken the oatmeal slightly, but it did so much more. Not only was the texture PERFECT, the oatmeal-quinoa flake mixture had this faint coconut flavor in the background, and with the super-duper injection of fiber, I was full straight through lunch. Which let me just say…never happens. Like ever. 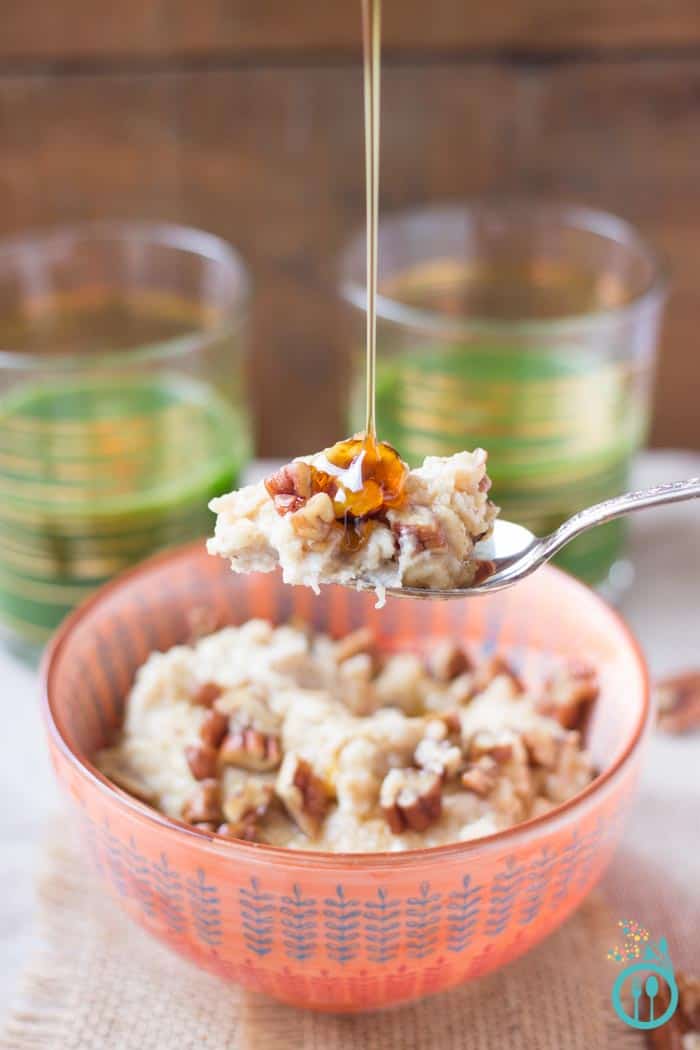 And now I'm eating it every single day. It's awesome.

I've jazzed it up numerous different ways, but this one has to be my favorite. It reminds me of warm sticky buns – just sans all the gluten, dairy and other junk.

With the simple addition of toasted pecans, a pinch of ground cinnamon and a *generous* drizzle of maple syrup, your bowl of fiber-filled oatmeal goes from plain Jane to mall-style, Cinnabon status. Might sound lame, but damn is it good. It's sweet, it's comforting, it's simple and yet it's decadent and almost dessert-like. It's a must-make. Like nowish?

With the simple addition of toasted pecans, a pinch of ground cinnamon and a *generous* drizzle of maple syrup, your bowl of fiber-filled oatmeal goes from plain Jane to mall-style, Cinnabon status. Might sound lame, but damn is it good. It's sweet, it's comforting, it's simple and yet it's decadent and almost dessert-like. It's a must-make. Like nowish?
Prep Time 2 minutes
Cook Time 3 minutes
Total Time 5 minutes
Servings 1 serving
Calories 579kcal
Author Alyssa
Print Pin 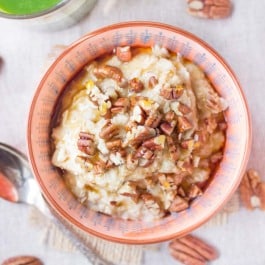