This super easy vegetable quinoa fried rice takes less than 10 minutes to make and uses only 7 ingredients. It's vegetarian and gluten-free too! 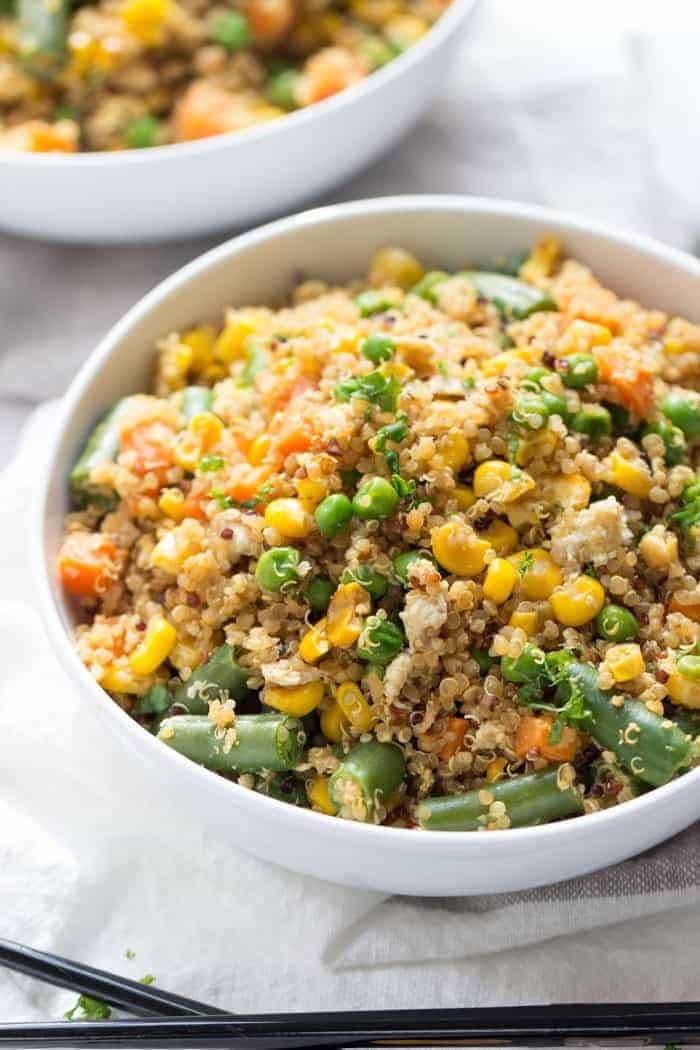 Fact: fried rice used to be one of my guiltiest pleasures. It’s one of those dishes that I always use to order whenever we got Chinese takeout (alongside a little lo mein, of course) and still crave pretty much all the time. It doesn’t matter what time of day it is, what season it is or what mood I’m in, fried rice (well errr…quinoa) always hits the spot.

But as someone who's gluten-free, I’m sure you know there aren’t many Chinese takeout joints that make a mean gluten-free fried rice. Well, at least in my hood. And that is where the problem lies my friend.

UNTIL NOW! Quinoa fried rice to the rescue!

Can Quinoa Be Substituted for Rice?

The short answer is YES! Quinoa is actually the perfect substitute for rice in almost any dish, especially when it involves cooked rice. Something like fried rice for example that uses cooked rice is a perfect place to use quinoa as a substitute.

Other ways you can substitute quinoa for rice include:

and so much more!

When it comes to making this quinoa fried rice recipe though? I might just be my favorite one yet! Oh, and did I mention that it comes together in less than 10 minutes? I even timed myself to make sure. 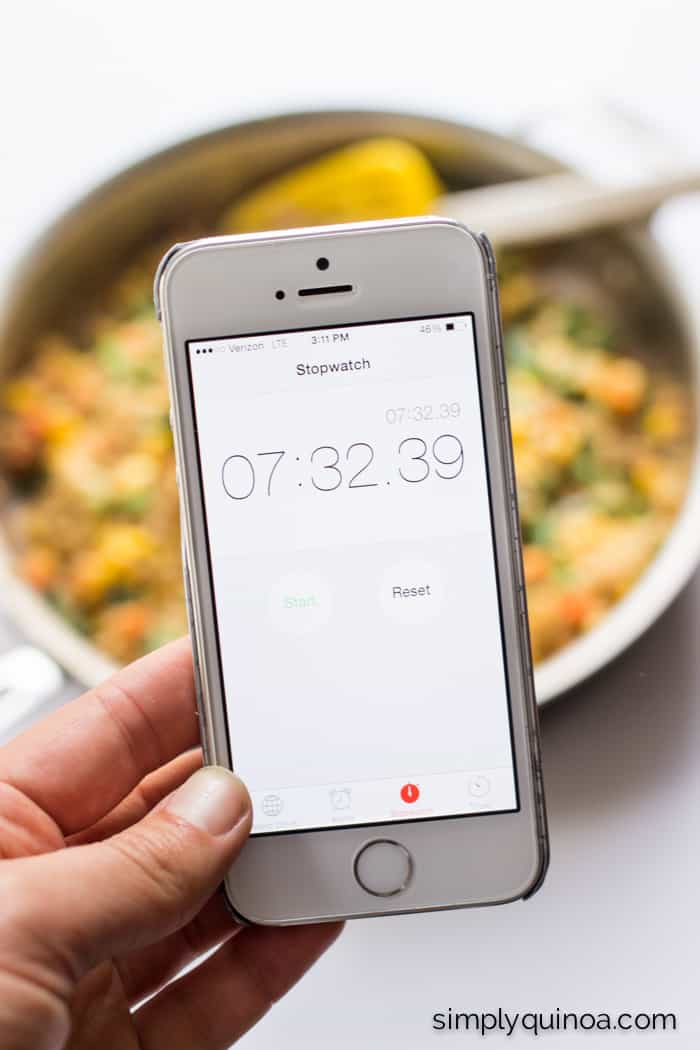 So does this really take less than 10 minutes you might wonder? I timed myself to prove it and yes, it 100% does!

After pushing “start”, I let the sesame oil and garlic heat up in the pan and let them cook until the aromas filled my entire apartment. Then threw in the quinoa and veggies, and let those start to soften and get all covered in the sesame-garlic flavors. At this point, we’re at about minute 3.

Then it was in with the eggs, which I cracked directly in the pan after I pushed the quinoa-veggie mixture off to the side, quickly scrambled with a fork, then mixed with the quinoa and veggies. Pour your soy sauce over the pan, add you ginger and give it a gentle toss. Take a taste, adjust your seasonings accordingly and stop. that. timer!

From start to finish it took me 7:32 seconds to make. 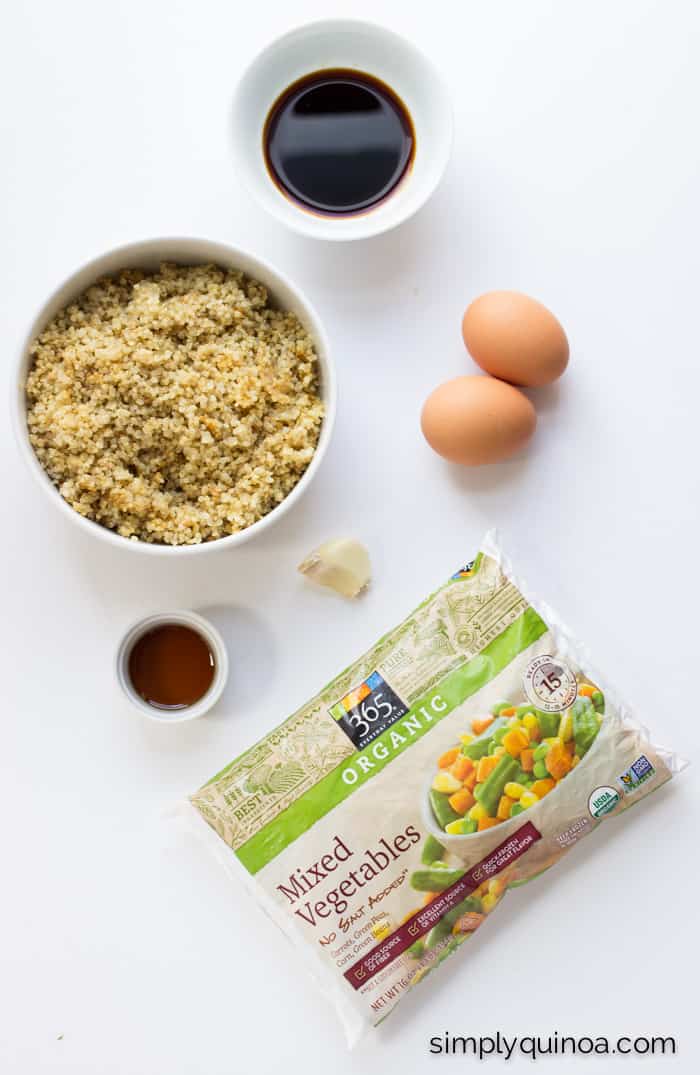 What You'll Need to Make This Quinoa Fried Rice

Under 10 minutes…but what else does this dish have going for it? How about the fact that it only uses 7 ingredients!? Do you love it yet?

All you’ll need to make these bowls of deliciousness are…

I know it sounds overly simplified, and perhaps you’re even a bit skeptical that we’ll actually be able to recreate that takeout staple with such ease, but really, it tastes better than that stuff that comes in the white carton…I pinky promise. 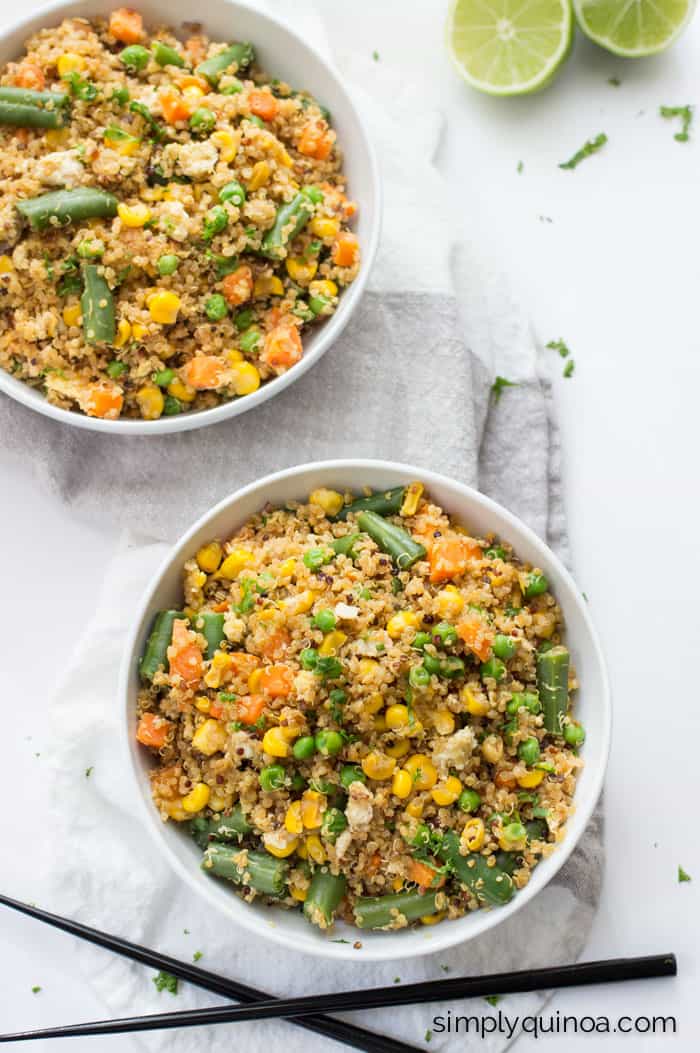 Just a few simple tricks to the keep the cook time under 10 minutes:

You probably already know this about me, but I make a big batch of quinoa on Sundays to keep for the week. Even though I recipe test all week, I still like to have some quinoa on hand to toss it into my salads at lunch, have for a quick breakfast, or even a dinner when I don’t feel like having leftovers. I usually cook 1 – 2 cups of quinoa, which will yield about 3 – 6 cups of cooked quinoa. It might seem like a lot, but for someone who eats quinoa every single day (at almost every meal!), it never goes to waste.

And while I don’t eat frozen veggies often, they do come in handy for the times when I need something fast and don’t feel like spending time chopping and cooking. When I do purchase frozen veggies, I ALWAYS make sure that they are organic. They’re not too much more expensive than conventional and so much better for you. This bag is from Whole Foods and it’s just their Mixed Vegetable option, but really you can use whatever combination of veggies you like. Use what you have on hand or just pick up whatever’s on sale when you go to the store next. As long as there’s some sort of veggie in here, the recipe will be perfect.

Ditch the takeout and try this 10-minute Quinoa “Fried Rice” instead! 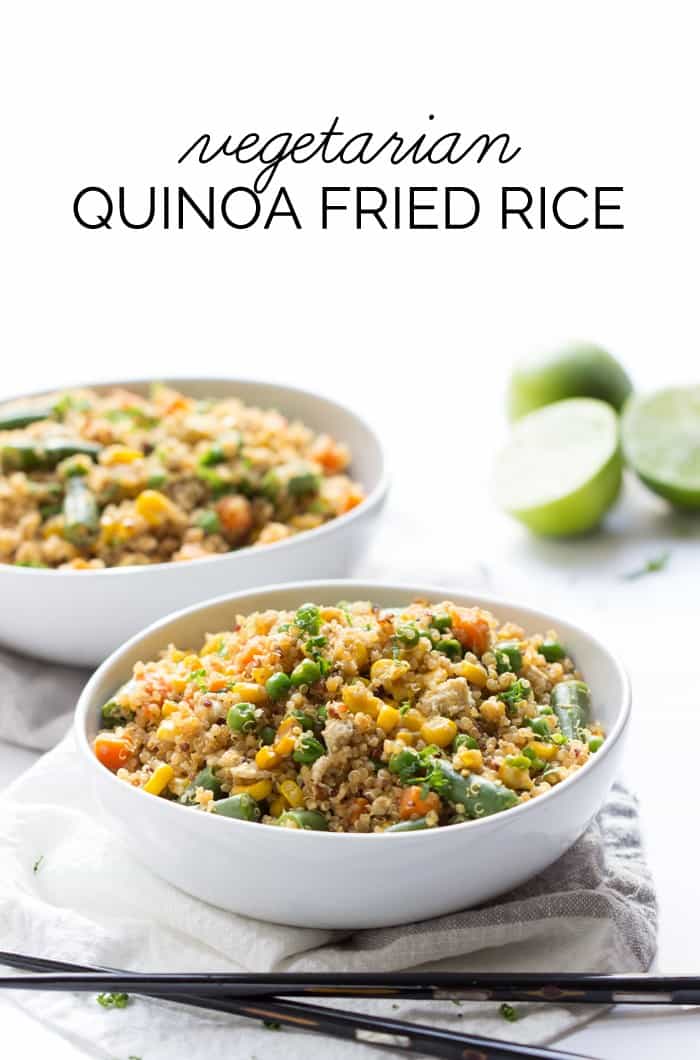 Super Easy Vegetable Quinoa Fried Rice that's made in less than 10 minutes and uses only 8 ingredients! (it's also gluten-free + vegetarian