This is my favorite London fog recipe! It's a creamy plant-based London fog latte made with foamy oat milk, earl grey tea, vanilla extract, and maple syrup for a bit of sweetness.

Want to shake up your morning coffee or matcha latte routine? Try this cozy London Fog drink. Made with earl grey tea, maple syrup, and frothy oat milk, this classic beverage is the perfect way to start your day. This recipe is a cinch to make and it tastes amazing.

What is a London Fog?

A London fog is a latte made with earl grey tea, steamed milk, vanilla, and a sweetener. It's popular at Starbucks where they make it with sweetened earl grey tea and vanilla syrup.

Contrary to its name, the London Fog was actually created in Canada. Apparently, there was a woman who was pregnant and could no longer drink coffee, so she asked her local barista to whip her up something familiar, but sans coffee. So they created the London Fog!

I wanted to create my own healthy version that was dairy-free and naturally sweetened, but still every bit as delicious. So for this London fog recipe, here's a quick overview of what we're using. Be sure to scroll down to the recipe card for specific amounts.

I also love sprinkling the latte with a dash of cinnamon at the end as well!

What's the Best Kind of Milk to Use?

If you're making a London fog at home, you can really use whatever type of milk you like. If you have a frother, go for one that froths, but if you don't really care about that, then choose what you like.

Some of my favorite milk options include:

Or if you use dairy, that works too!

Do I Need a Frother?

A frother is helpful if you want to get that foamy top, but it's not necessary. You can just warm your milk in the microwave or on the stovetop, then use it in your drink. You can also get a bit of froth by whisking the milk vigorously with a whisk. Make sure your bowl or pot is large enough for you to whisk the milk without anything splashing out.

Can I Use a Different Tea for a London Fog?

It won't be a London Fog recipe if you use another type of tea, but you totally can if you want. This would be just a generally great tea latte with whatever type of bagged tea you like. Just know, it won't be a “true” London Fog 😉

How to Make a London Fog Drink

Are you ready to make a cozy London Fog? Here's how to do it:

So tell me…are you a tea or coffee drinker? Will you try this? I can't wait to hear what you think! We'll be sharing a how-to over on Instagram as well, so be sure to check that out. 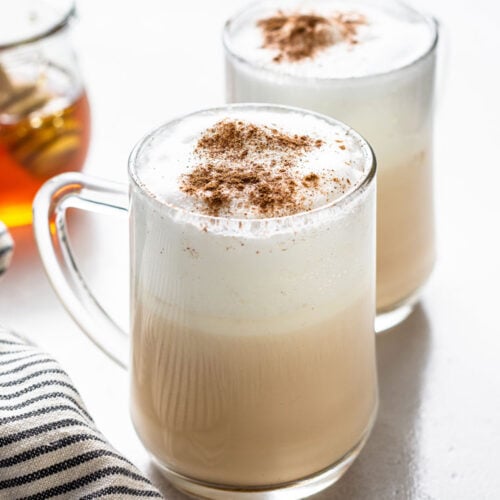