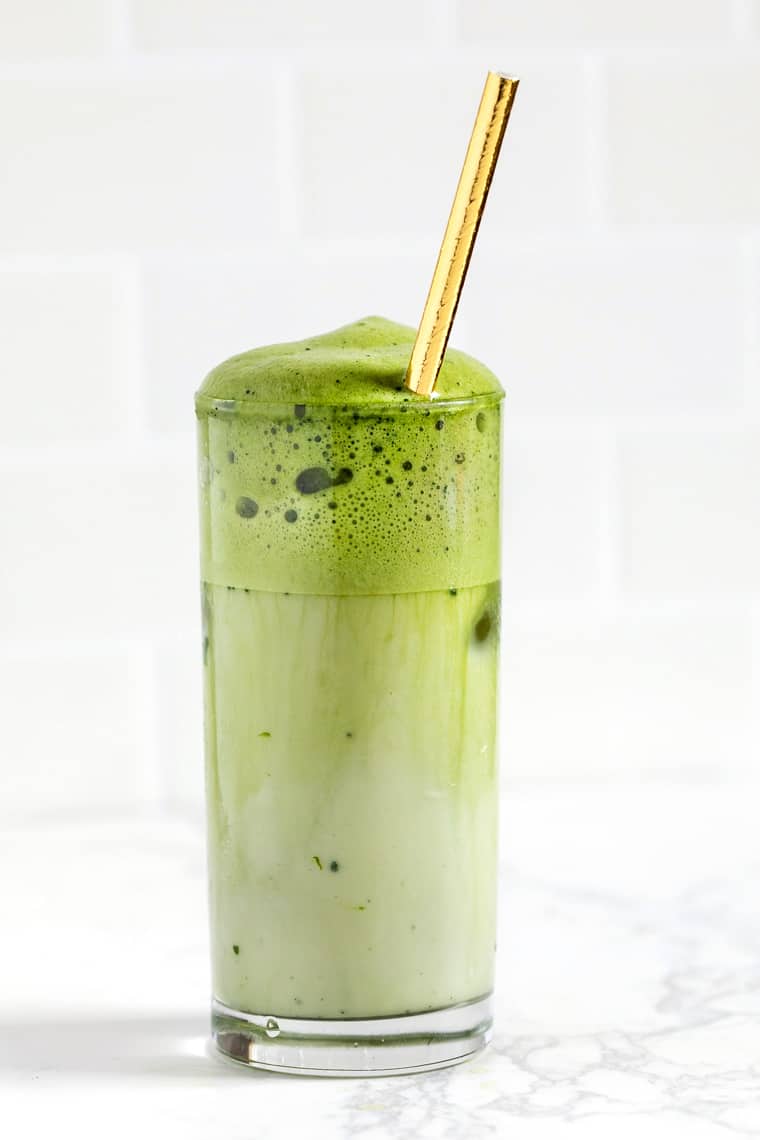 So this dalgona coffee trend is really going crazy, huh? I'm seeing it all over my Instagram feed, it's on YouTube and people are loving it!

But what about all of us non-coffee drinkers? We have no way of enjoying this delicious drink!

Until that gave me an idea…MATCHA! Can we make dalgona matcha? Is it possible? Turns out it is possible to make a whipped matcha latte, but the recipe is a bit different than the coffee version. It took me a few tries, but I'm excited to share the process with you and teach you how to make it! 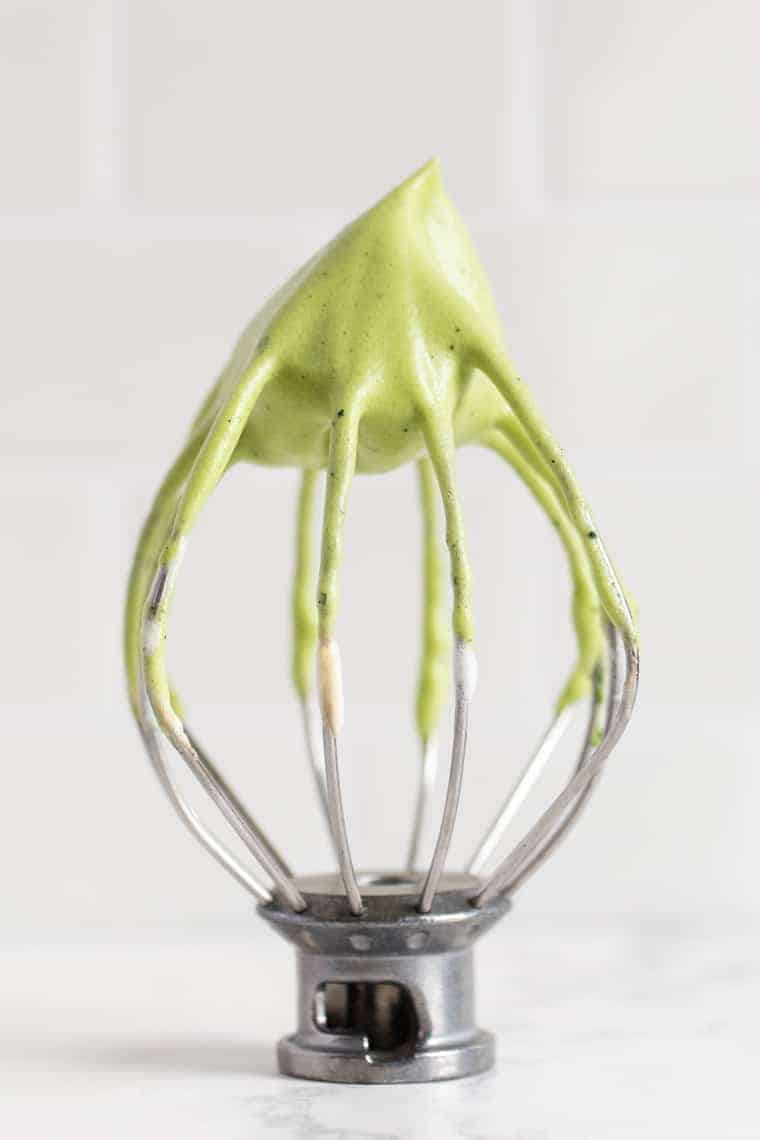 What is Dalgona Coffee?

Okay, first we gotta talk about dalgona coffee. This is actually something that's been around for quite a while, but just recently got popular – thanks to TikTok. Dalgona coffee is a coffee drink made of whipped coffee that is poured on top of milk. It's a popular drink in South Korea.

Can you Make Dalgona Matcha the Same Way?

My first attempt at making this drink was to just follow that same recipe. It doesn't work. Like at all.

I think the main two things that went wrong were:

I was a bit stumped as to why because I thought instant coffee was made out of just coffee. BUT it turns out, instant coffee actually contains a gum additive which is what makes it whippable. And what helps it get fluffy.

So the same proportions/recipe won't work for making dalgona matcha. BUT, it does work with one addition! 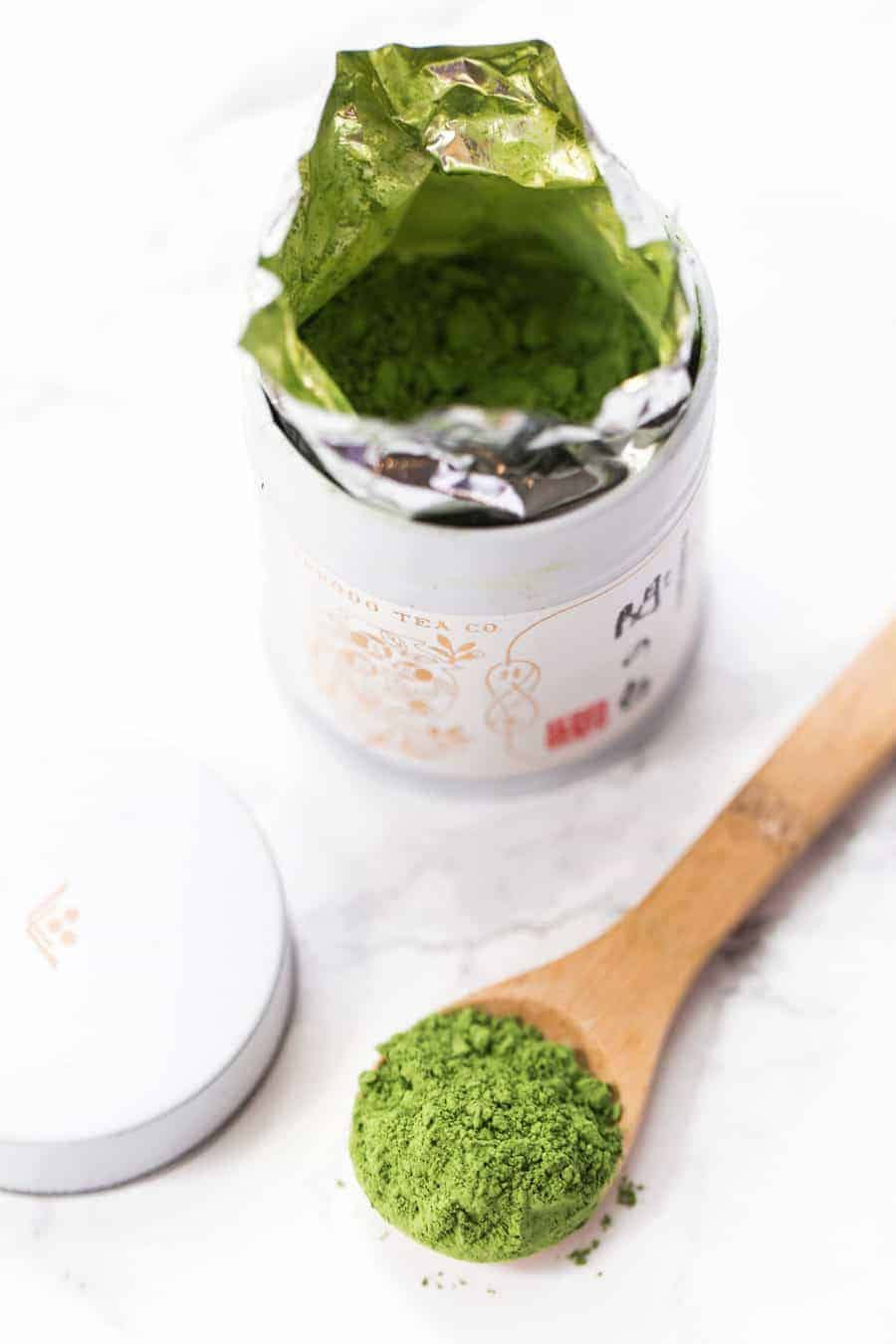 To make this recipe I realized we needed something that whipped up on its own that you could stir all the rest of the ingredients into. I did some searching and saw a lot of people using egg whites, but I wanted a vegan version. So we're using… AQUAFABA! (more on that in a sec)

This recipe is only 5 ingredients and makes 4 servings!

Aquafaba is whipped chickpea juice. I know it sounds disgusting, but it's actually incredible. You can whip the liquid into the same consistency as whipped egg whites.

The liquid that is found in the can of chickpeas is pure vegan gold. Since it's high in protein, it acts similar to egg whites. You add it into a stand mixer (or use a hand mixer) and beat it up. It's not quite as strong as egg whites so baking with it can be a teeny bit tricky, but it works wonders in whipped matcha. Plus it's already cooked, so no worries about getting sick from drinking uncooked egg whites!

How to make Aquafaba

To make aquafaba, drain a can of chickpeas into a bowl. Pour that liquid into a stand mixer – I love my mini mixer from KitchenAid; it's awesome for apartments!

With the whisk attachment, beat the liquid until it fluffs up. It takes about a minute or so and it should hold the peaks similar to egg whites!

Don't have a stand mixer? You can also use a hand mixer or a whisk (but dang that would be tiring!). 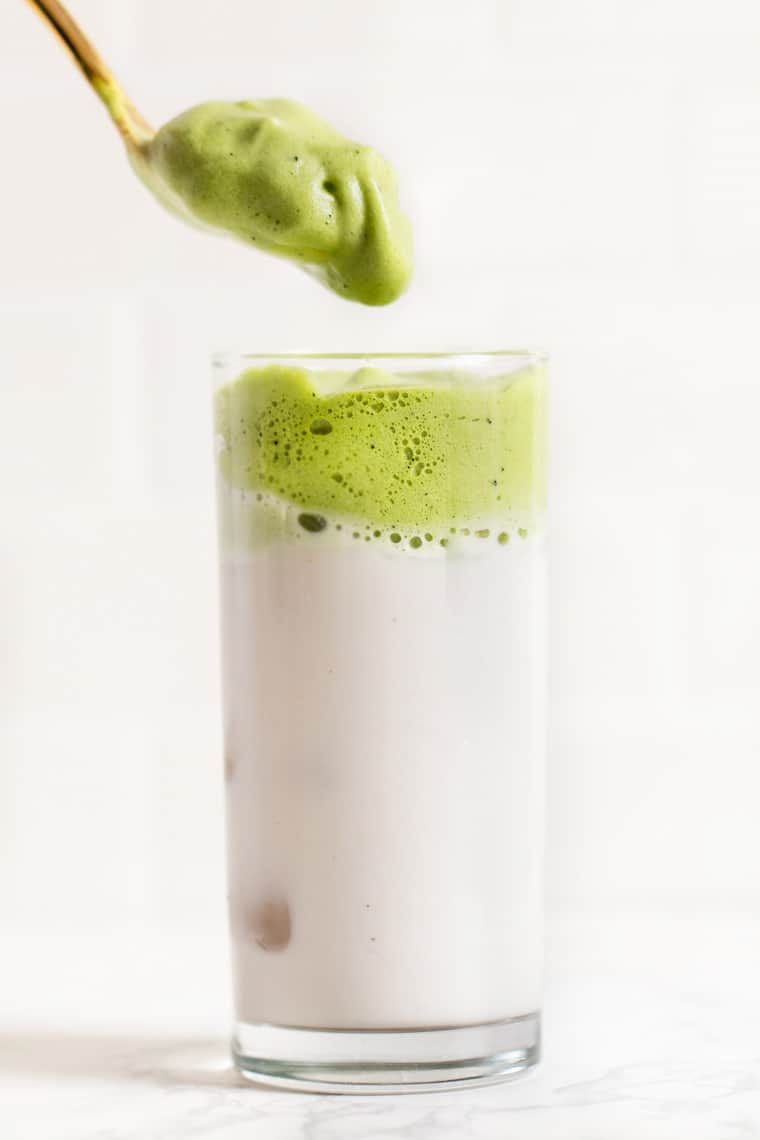 How to Make Whipped Matcha

This recipe couldn't be easier to make at home. It's just 5 ingredients and three simple steps!

You'll start by making your aquafaba. Whip it like we just talked about!

In a separate bowl, whisk together your matcha, coconut sugar and hot water. Our goal is to try and dissolve the sugar crystals as much as possible. So just whisk it until it's as smooth as possible.

Turn the mixer back on and slowly stream in the matcha mixture. Just keep on whipping until it's combined and the contents of the bowl have turned green!

Now it's time to serve it! I like to serve this over almond milk and ice. I just fill my glass up about 3/4 of the way and do few generous spoonfuls of the matcha mixture on top. Then I use a straw to mix it all together! 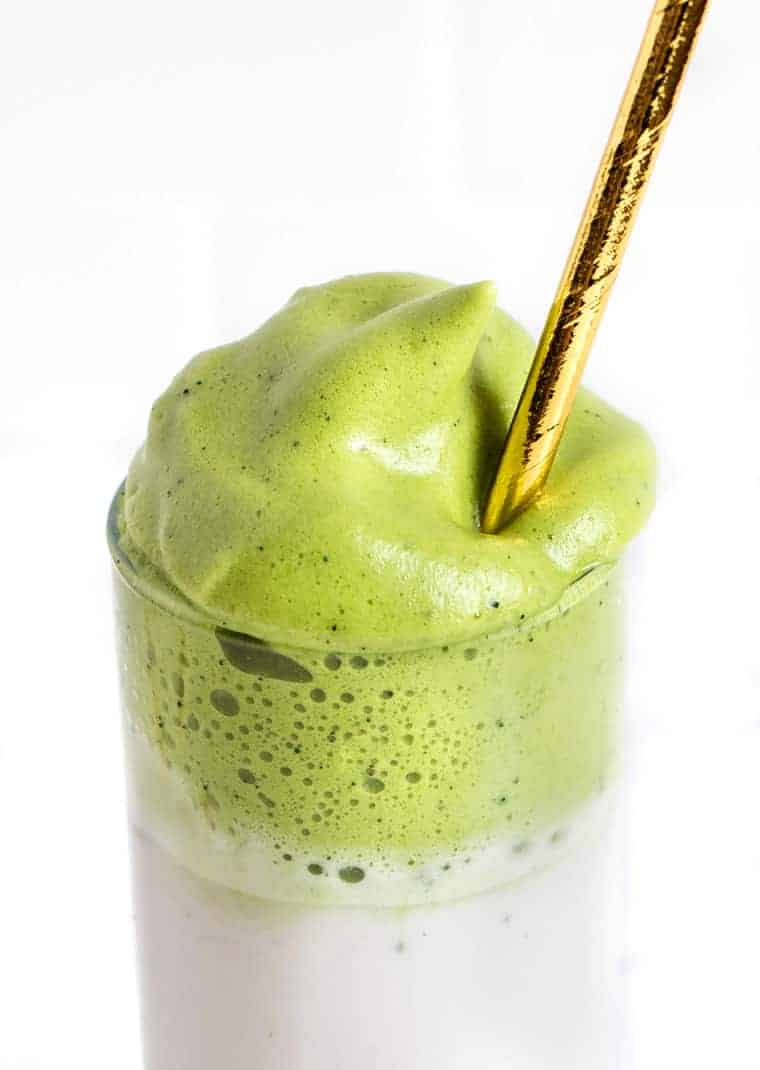 Can You Use Stevia in Whipped Matcha?

If you've seen me make my matcha recipe before then you know I use monk fruit extract to sweeten it. The beauty of this recipe is that we aren't really relying on the sugar for the texture so you can totally swap it out with monk fruit extract or stevia. I would still mix them all together separately and just do a few sprinkles. Remember a little goes a long way with these sweeteners!

Should This be Iced or Hot?

Typically dalgona coffee is served cold, but you could also serve it hot if you wanted. It's really just up to you!

Okay so just a few final tips before I let you go:

And that's pretty much it!! I hope you absolutely love this recipe. It's honestly SO delicious and is such a fun way to have matcha. 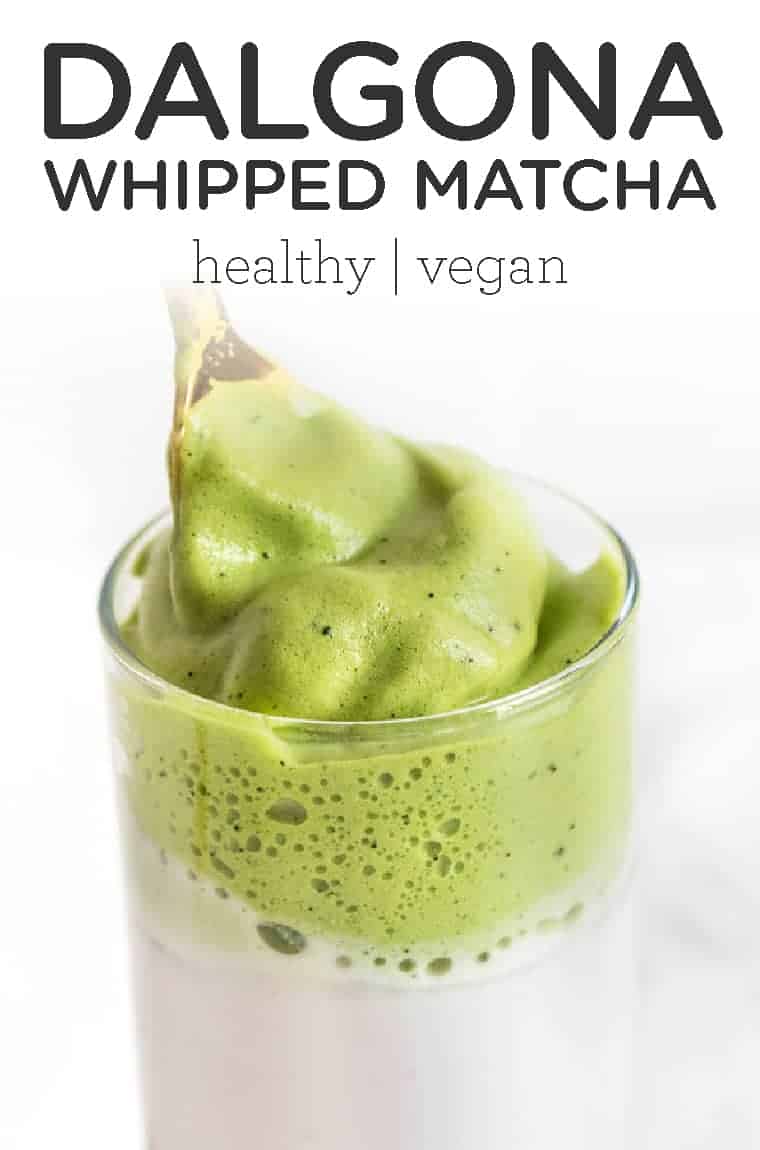 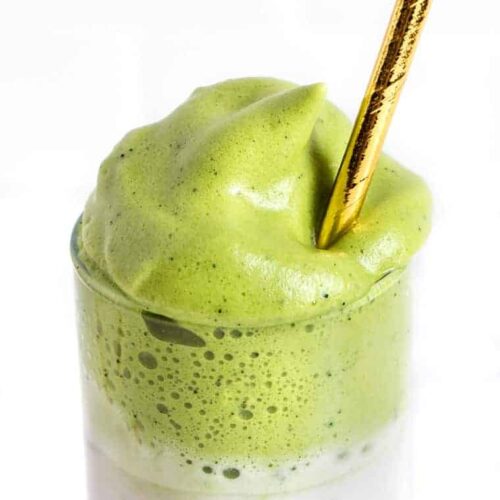 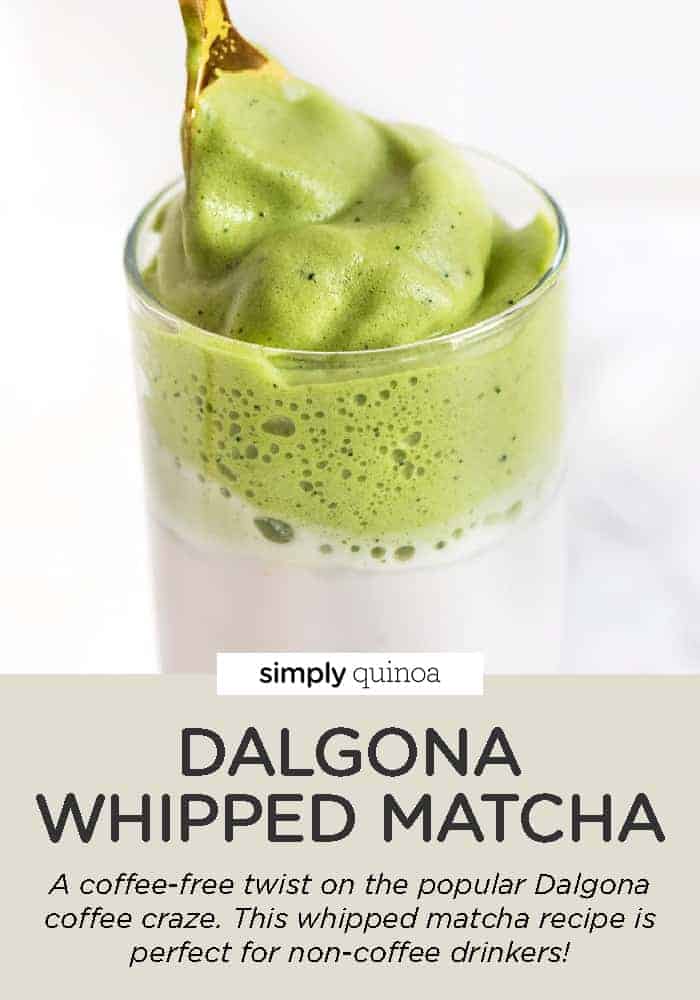