These delectable Mexican Quinoa Stuffed Peppers are a hearty, plant-based entree that is easy to make, packed with flavor and doubles as a great meal-prep option! 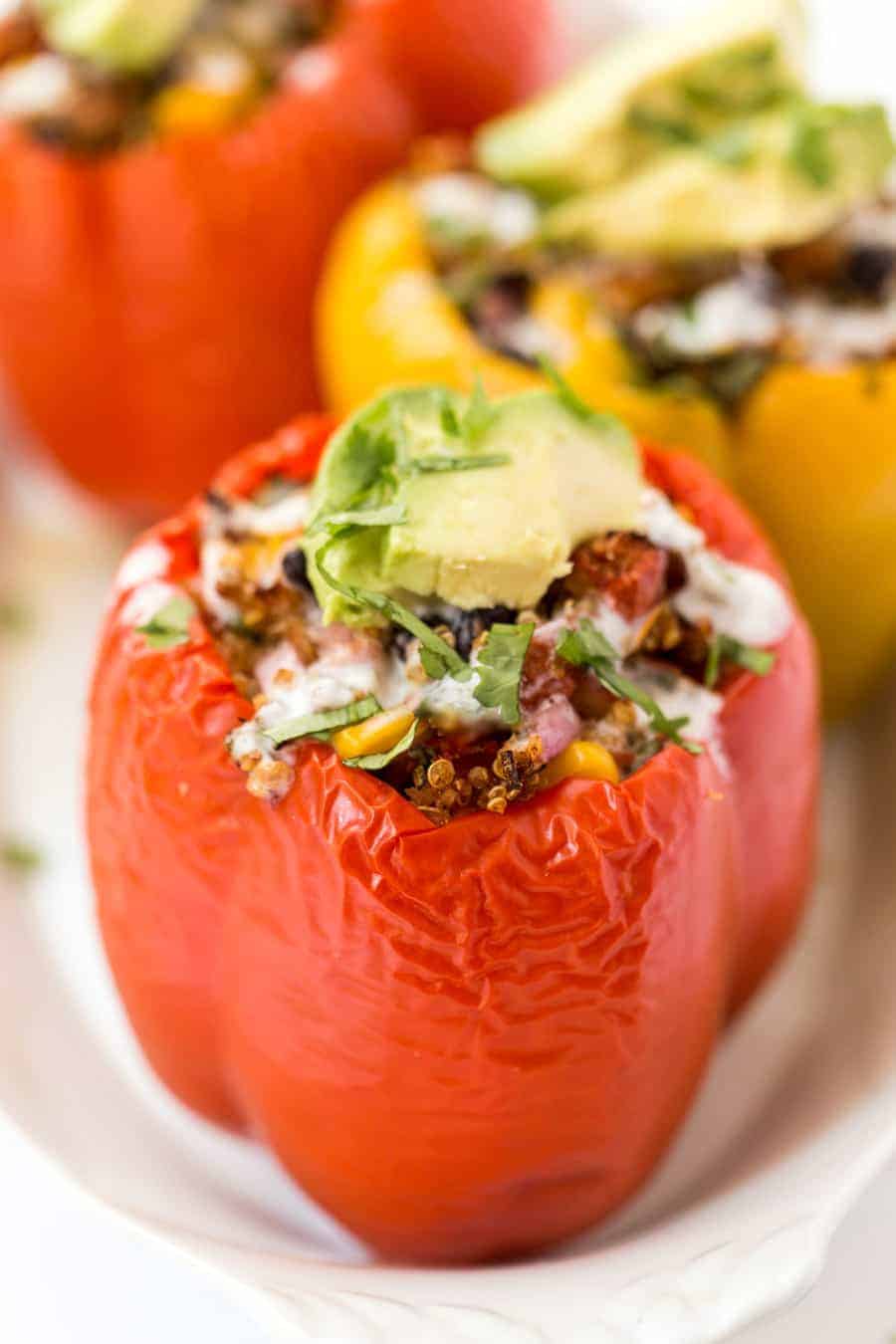 One of the first ever quinoa dishes I had was a quinoa stuffed pepper recipe that Matt's mom made us. I was newly gluten-free, it was my first time visiting his family, and she welcomed us with an amazing dinner of stuffed peppers.

I was so nervous going out there because I didn't want my “special” diet to affect how everyone else ate, but of course, they were oh-so gracious and made sure every meal we ate was safe for me to eat as well.

When I came home from the trip, I recreated her recipe and put them on the blog, but it has since been about 6 years and they were in desperate need of an update. So that's what we've got today: an updated version of my Mexican Quinoa Stuffed Peppers! 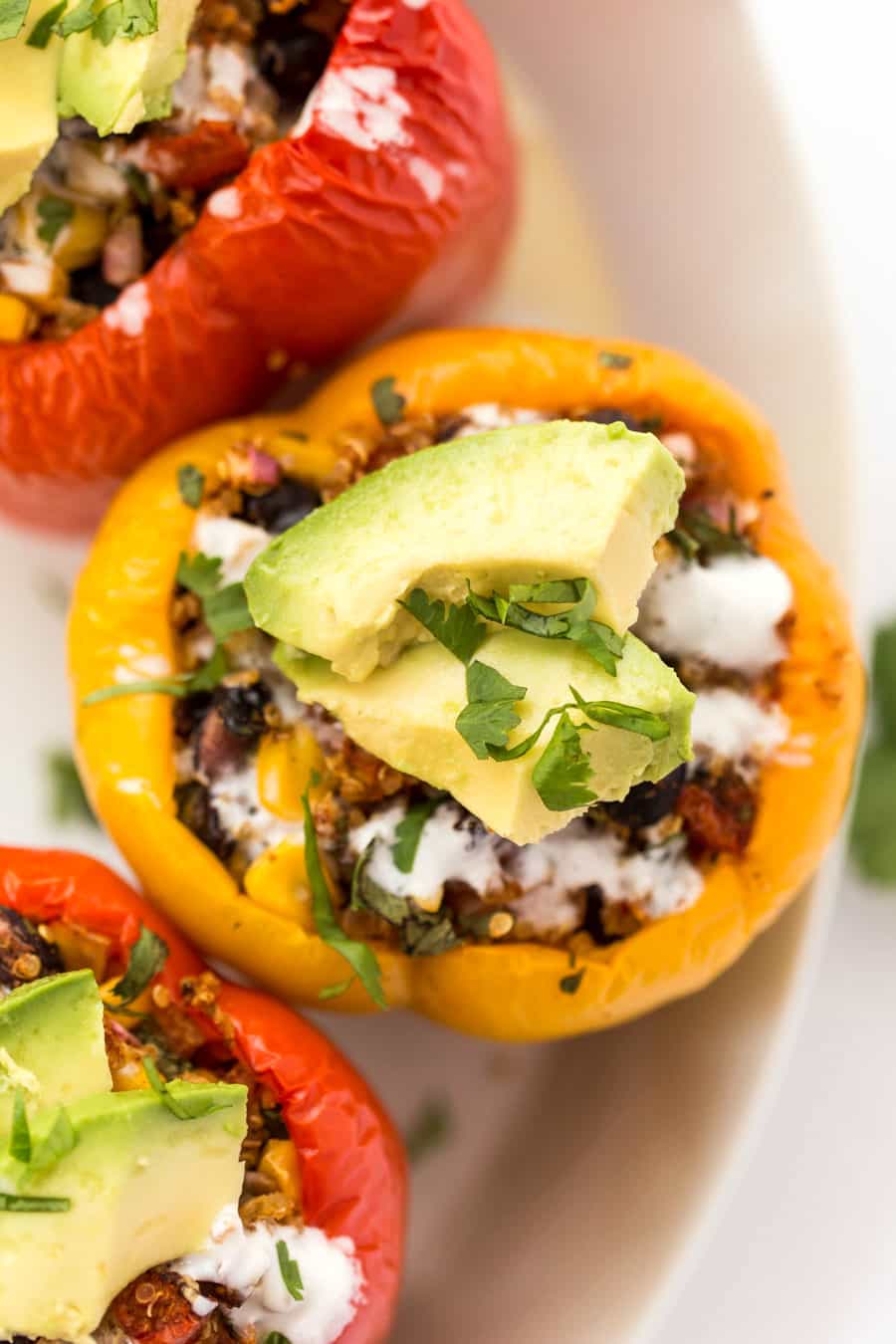 One of the most common questions I get about plant-based eating is staying full. Because plants are inherently lower in calories and fat than animal products, the volume to calorie ratio is smaller. Meaning, if we eat the same volume of food, most likely, it will be lower in calories.

This can sometimes result in feeling hungry pretty soon after we've had a big meal.

But not this time around. These hearty quinoa stuffed peppers are sure to fill you up and leave you completely satisfied! 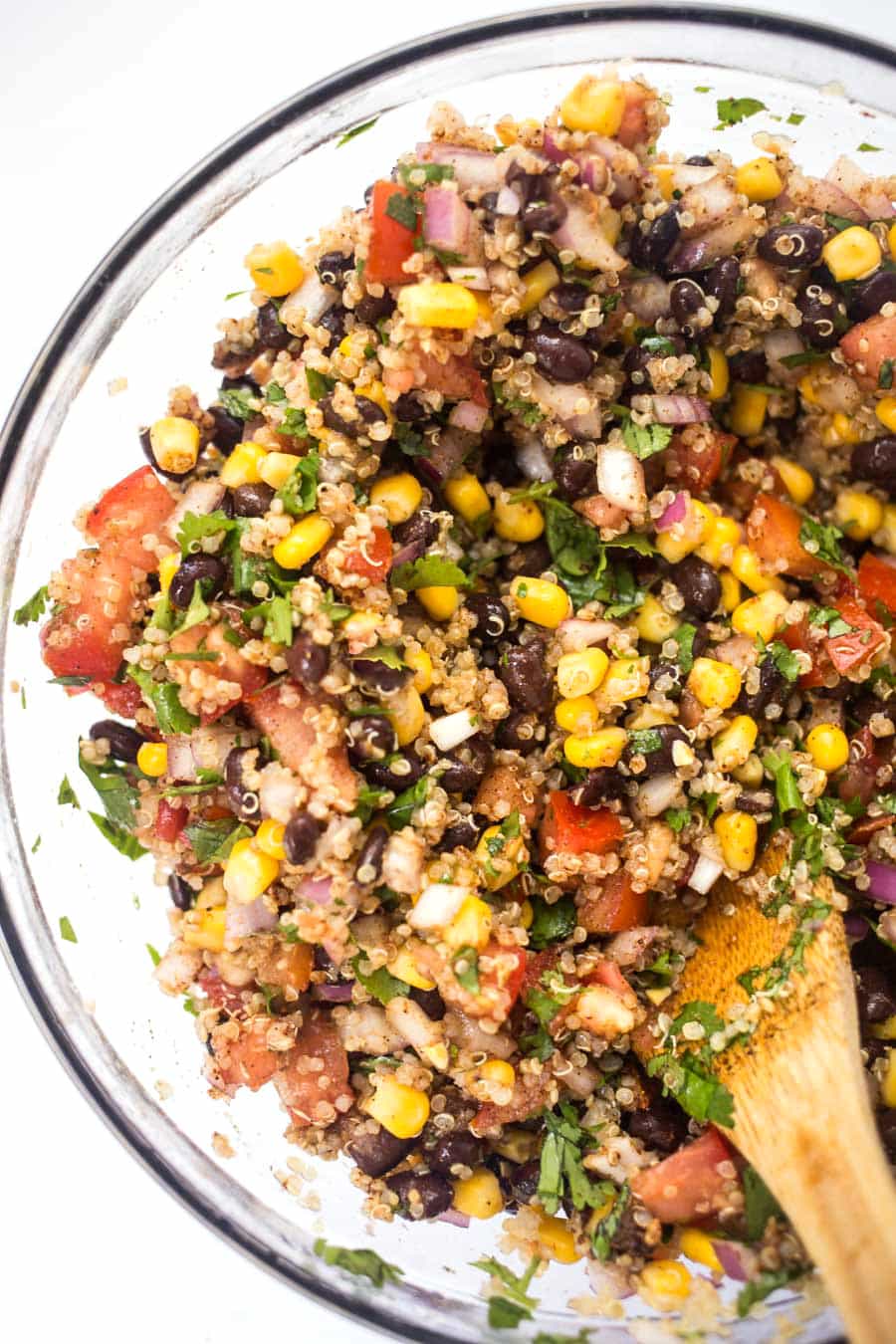 For our filling, we're going with a blend of fluffy quinoa and black beans for added fiber and protein, as well as sweet corn, tomatoes, red onion and cilantro. Tossed in some lime juice and smoky Mexican spices like chili powder and cumin, this filling is flavorful and bright!

(it's also hard to not eat it straight from the bowl as you're stuffing your peppers…oops!) 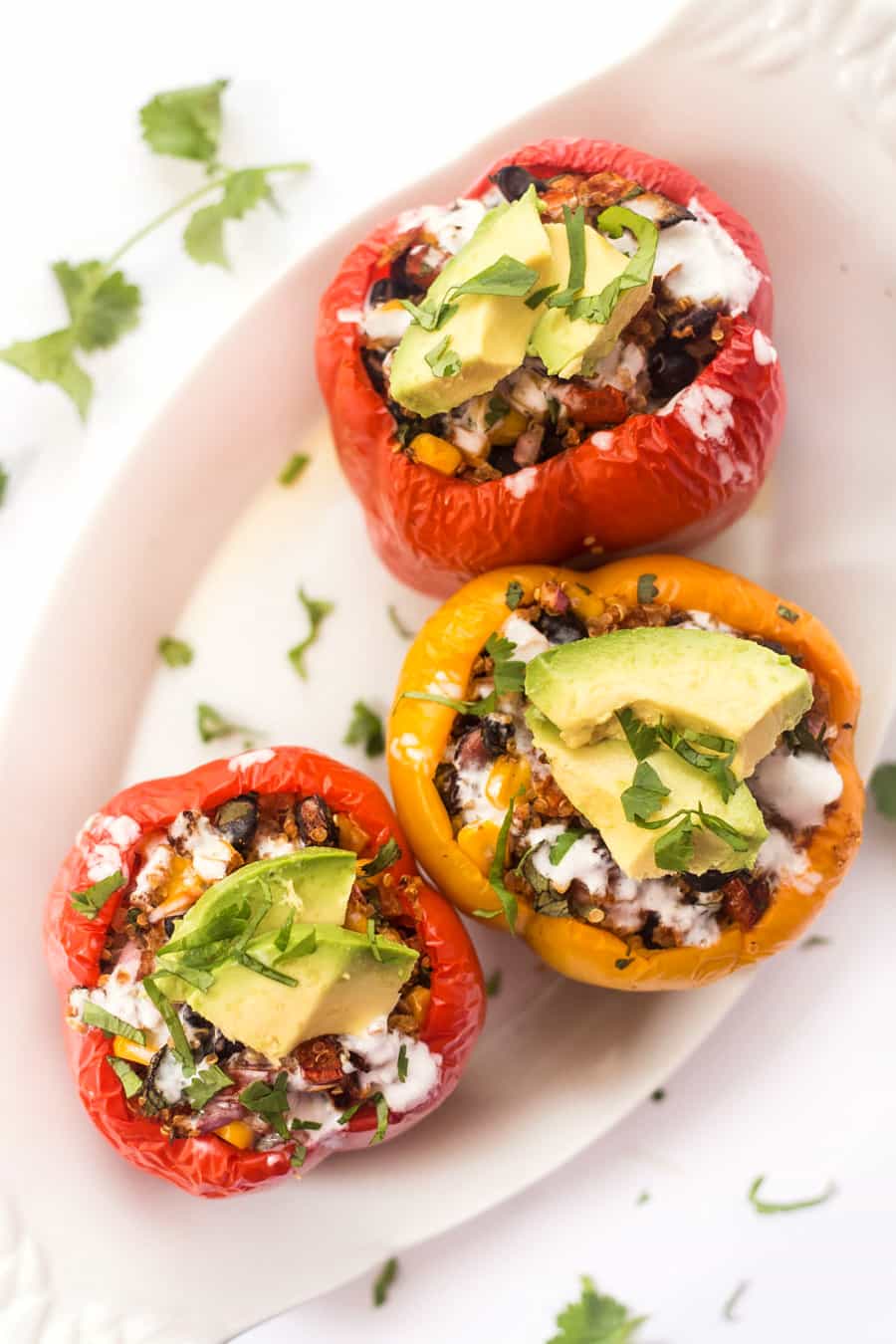 Then we stuff them inside sweet bell peppers and roast them until they're tender and juicy!

For toppings, I went with a vegan coconut yogurt that I thinned out, but you could also use sour cream, vegan sour cream or just hot sauce. Of course, as a self-proclaimed avocado-addict, I definitely encourage the avocado slices, but that's up to you ????

I just know you guys are going to LOVE these! 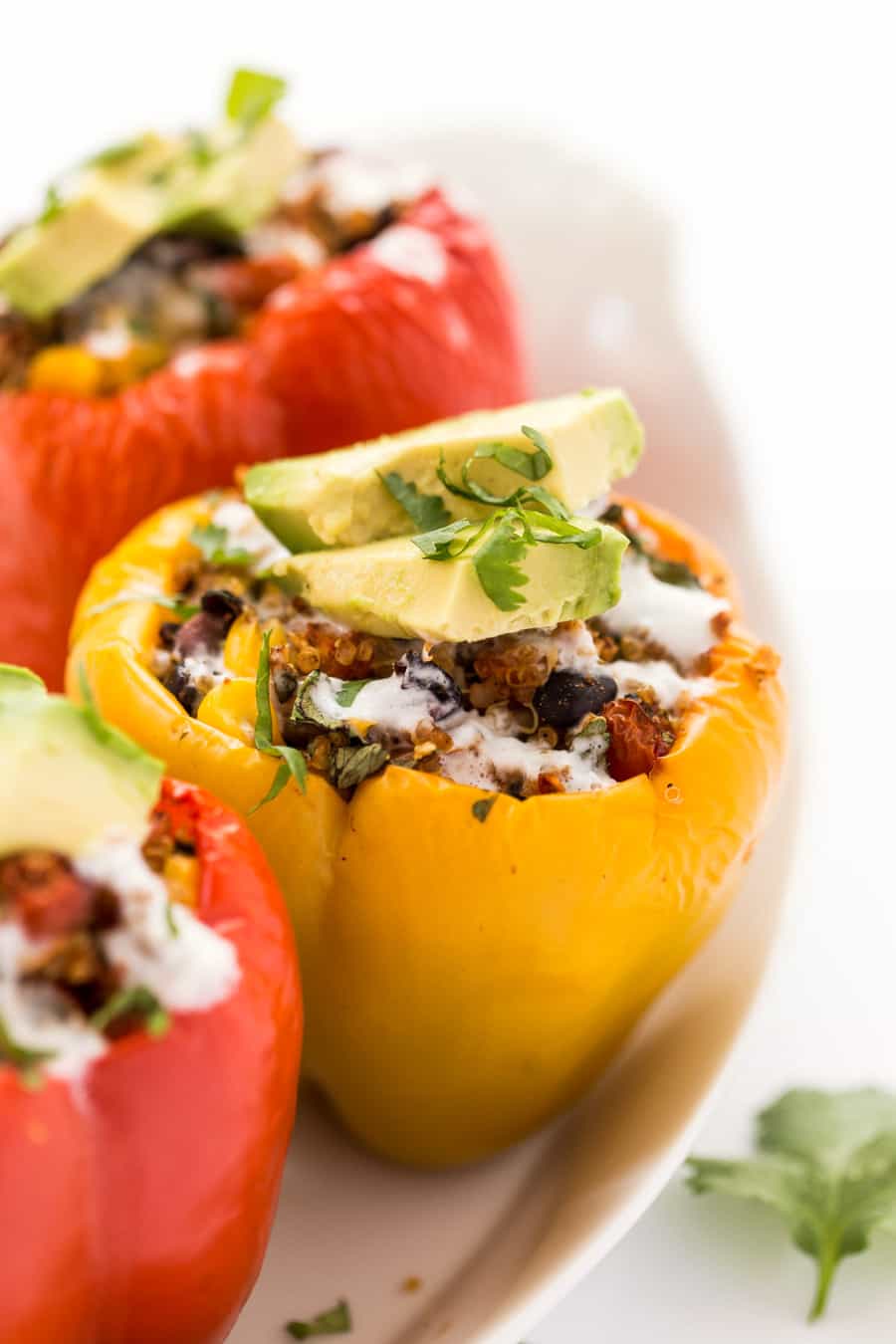 And like I mentioned in the beginning, these Mexican Quinoa Stuffed Peppers also double as an awesome meal-prep option!

I have successfully frozen mine, but since they're plant-based (and we don't have to worry about any animal products spoiling), these babies will last in the fridge for at least 5 days. I'd recommend serving them with a small side salad of romaine, cherry tomatoes and hemp seeds. That's my personal favorite! 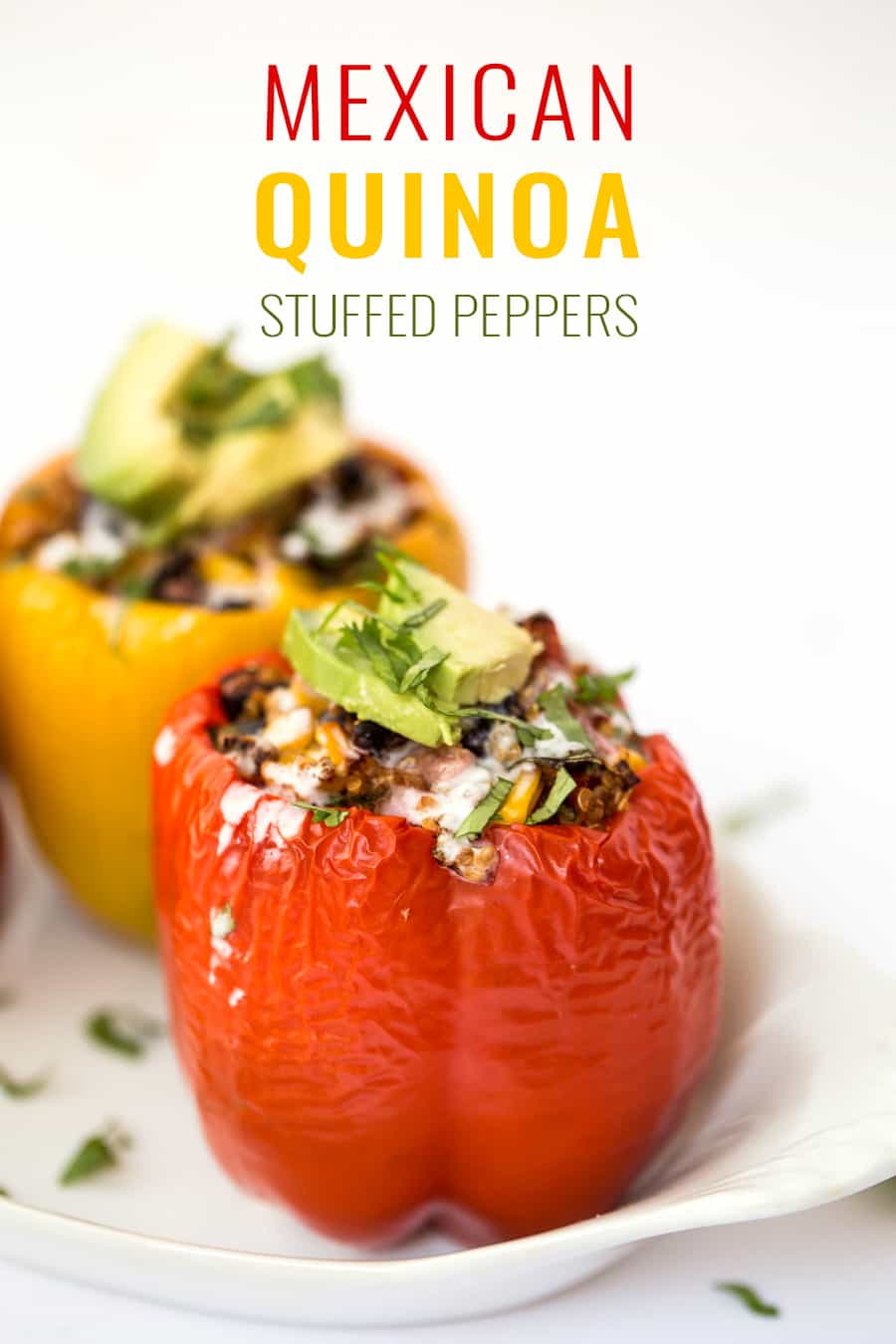 Whipping these up for a crowd? Here are some more delicious Mexican-inspired recipes you might consider bringing to the table! My Healthy Refried Bean Dip is always a crowd-pleaser, no one can resist a good bowl of Spicy Mango Guacamole, or you could also whip up a big plate of my Sweet Potato Quinoa Nachos!

When you try these quinoa stuffed peppers, I'd love for you to share a photo with me! Make sure to tag me on Instagram if you snap a pic using #simplyquinoa or @simplyquinoa! 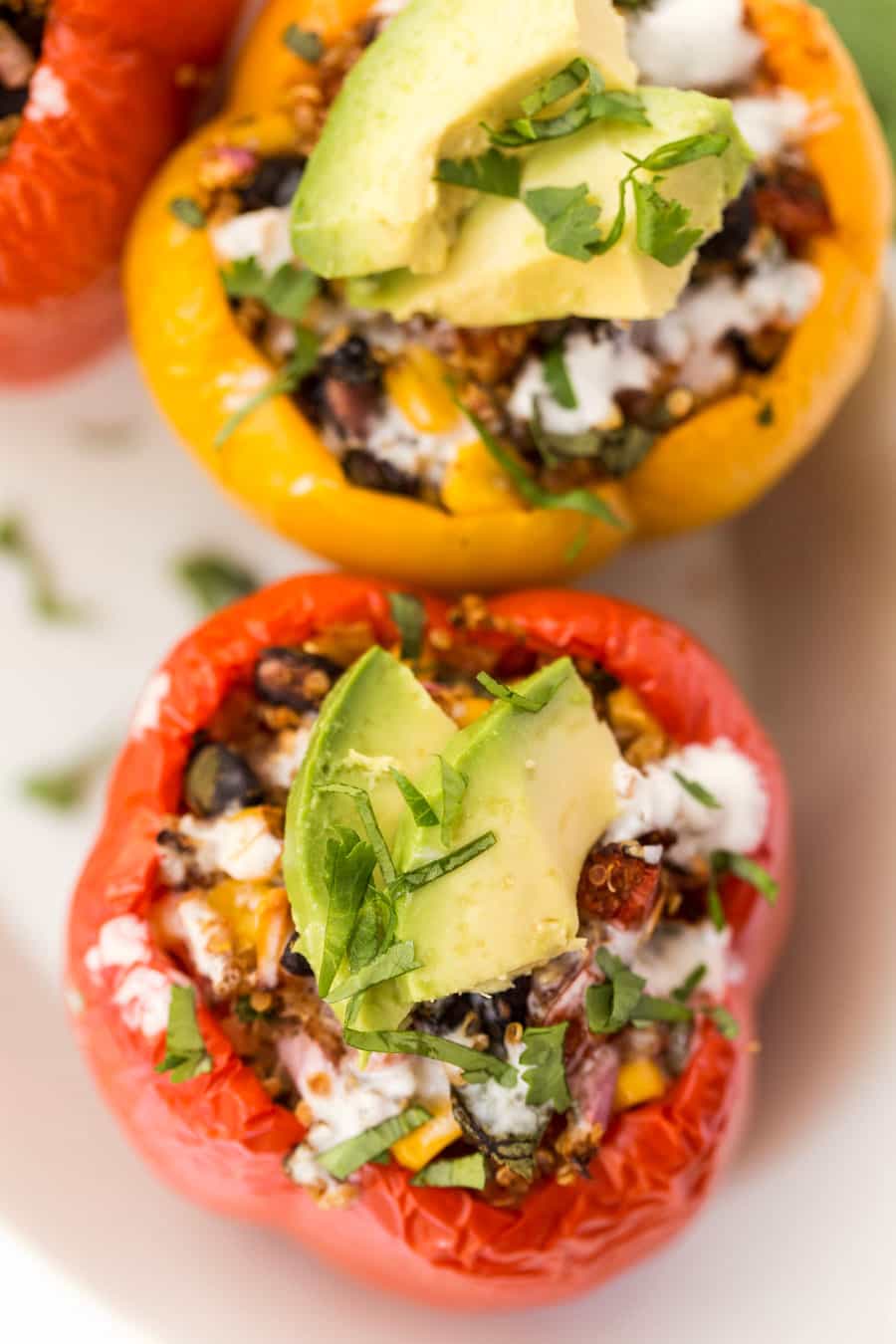 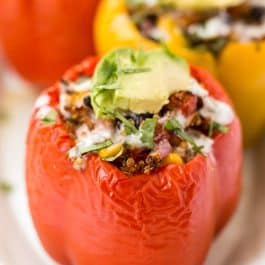