These almond flour waffles are what breakfast dreams are made of! With a blend of wholesome, high-protein flours, they manage to be both fluffy and hearty at the same time!

Waffles are probably my favorite breakfast food on the planet. Part of that stems from my Dad's Sunday waffle routine growing up, and the other part is that they're fun to eat and easy to customize with all kinds of different toppings.

You can go sweet!

You can go savory!

For this almond flour waffle recipe, I wanted to create something that was light and fluffy, naturally gluten-free, and made without all the usual starches that are added to gluten-free waffles.

The base, of course, is almond flour, and to that, we're adding quinoa flour and flaxseed meal. The quinoa flour adds a bit more protein, while the flaxseed meal brings in more healthy fats and omega-3s. The result is a waffle that’s healthy, relatively low in carbs (in comparison to traditional waffles) and high in protein.

Just add your favorite toppings and dig in!

Here’s everything you need to make the fluffiest almond flour waffles!

Why Do You Separate Eggs for Waffles?

The other key to making these waffles super fluffy is to separate your eggs.

By whipping the egg whites into soft peaks and then folding them into the rest of the ingredients, you're left with an incredibly light batter, which helps keep the waffles nice and fluffy.

What is almond flour? Is it healthier than regular flour?

Almond flour is made from ground almonds, which are blanched to remove the skins and then ground into a fine flour. It is lower in carbs than regular flour and can also help reduce “bad” LDL cholesterol. Almond flour is also a good alternative flour for anyone dealing with insulin resistance.

How to Make Almond Flour Waffles

Mix the wet ingredients. Place the egg yolks in one mixing bowl and the egg whites in another. To the bowl with the yolks, add the milk, syrup, and coconut oil (if you’re using it), and beat until smooth.

Finish the batter. Add the wet ingredients to the dry ingredients and mix until just combined. Fold in the egg whites.

Make the waffles. Grease the waffle iron and drop 1/4 cup of batter into the center (or whatever amount your waffle iron requires). Cook according to your waffle maker's instructions until the waffle is golden brown and lightly crispy; this usually takes 2 to 3 minutes. Transfer the finished waffle to a wire rack and repeat with the remaining batter.

I used raspberries and maple syrup for these particular waffles, but here are some additional ideas:

Can You Make Waffles Without a Waffle Maker?

Kind of! If you have a grill pan, you can use that to make waffles. It’s obviously not quite the same, and unlike with a waffle iron, you’ll have to flip the waffles and cook each side separately.

If you want to give this a try, heat your grill pan over medium heat and spray it well. Add 1/2 cup of batter to the pan; once bubbles form around the edges and the bottom looks nicely browned, carefully flip it and cook the other side.

Here are some additional pointers for perfect almond flour waffles:

How to Store and Reheat Leftovers

You can store these waffles in an airtight container or wrap them well and keep them in the fridge for up to 5 days. I recommend reheating them in a toaster, toaster oven, or in a 350ºF oven, which will restore some of that crispy exterior. Of course, a microwave will work too if you’re in a hurry!

Can You Freeze Homemade Waffles?

Yes, you can freeze these almond flour waffles for up to 3 months. Wrap them tightly or store them in a freezer bag.

To reheat waffles from frozen, I usually just pop them in the toaster for a few minutes, but you can also heat them up in the microwave or oven.

These almond flour waffles are what breakfast dreams are made of! With a blend of wholesome, high-protein flours they're hearty and fluffy at the same time!
Prep Time 10 minutes
Cook Time 10 minutes
Total Time 20 minutes
Servings 6 Waffles
Calories 222kcal
Author Alyssa
Print Pin 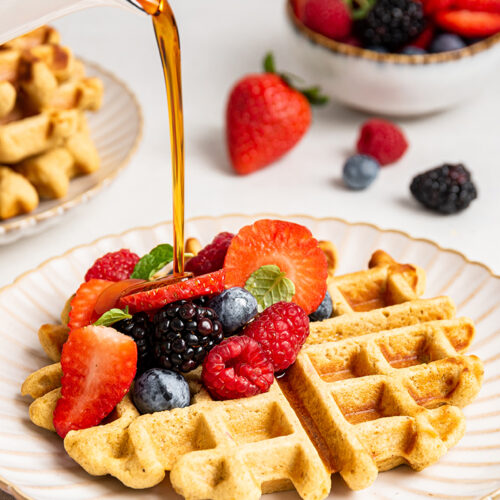 How to store and reheat: Store waffles in an airtight container or wrap them well and refrigerate for up to 5 days. I recommend reheating them in a toaster, toaster oven, or in a 350ºF oven, but a microwave also works. How to freeze: Freeze almond flour waffles for up to 3 months wrapped tightly or stored in a freezer bag. To reheat waffles from frozen, warm them in the toaster or oven for a few minutes or heat them up in the microwave.