This rich and creamy Mediterranean Pasta Salad is made with a delicious, tangy dressing and is packed with veggies! It's vegan, gluten-free & high-protein! [this recipe is sponsored by Sabra] 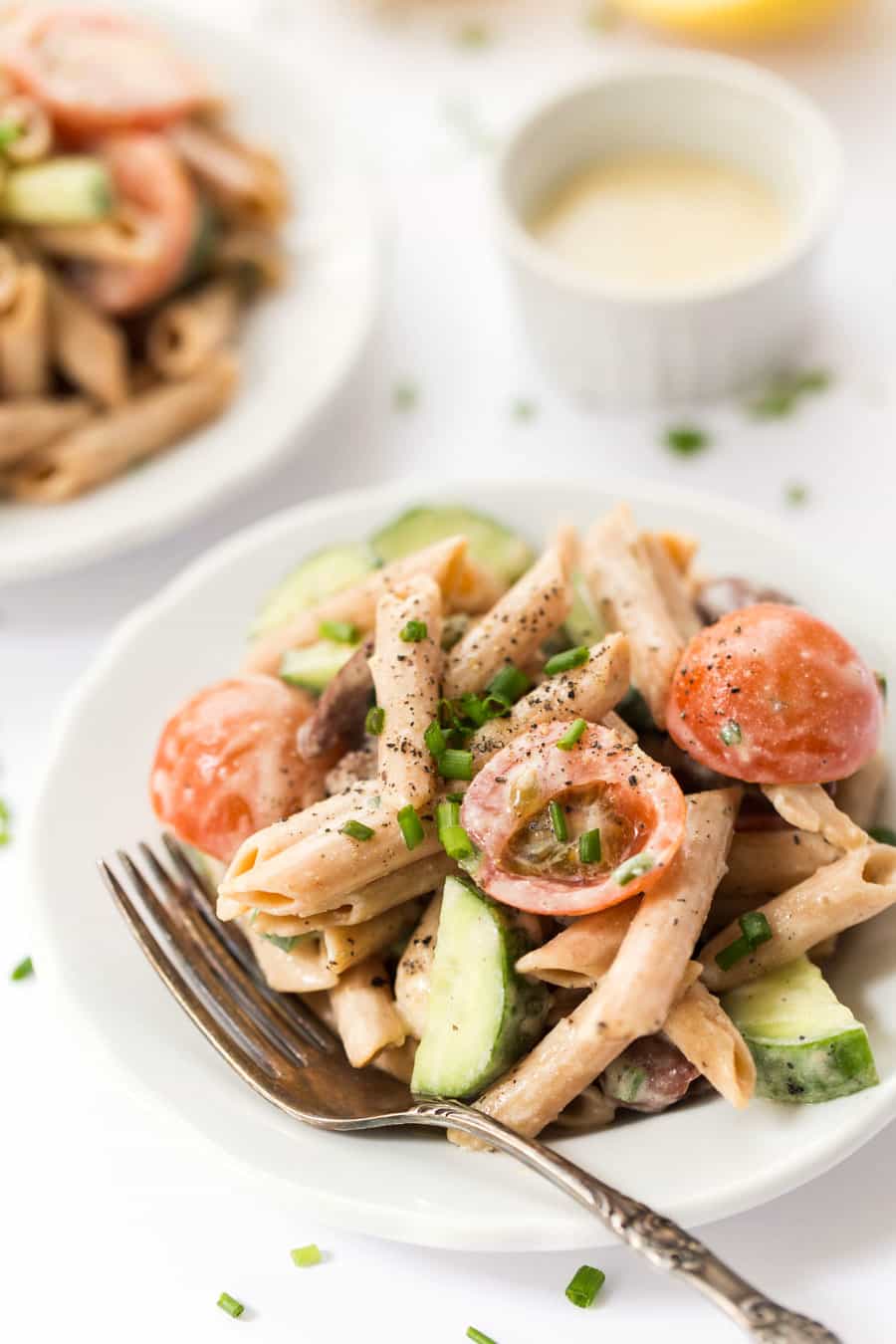 This has been quite the whirlwind weekend! We drove down to my grandmother's house on Friday to celebrate my cousin's wedding. Yesterday was the wedding and it was such a blast! The first wedding of the year and it was so great to be with family.

If you've read my story, then you know my mom's side of the family is Italian. We have a tradition when we're down here to have Sunday dinners at my grandmother's house, everyone comes over and she makes a big pot of spaghetti and sauce (we call it gravy). That is where my love for pasta began, and still, I think my heart will always lie with the traditional red sauce and pasta combo.

But today we're changing up our pasta game and making this amazing Mediterranean Pasta Salad. It's super easy to make, is packed with veggies and tossed in the dreamiest cream sauce! 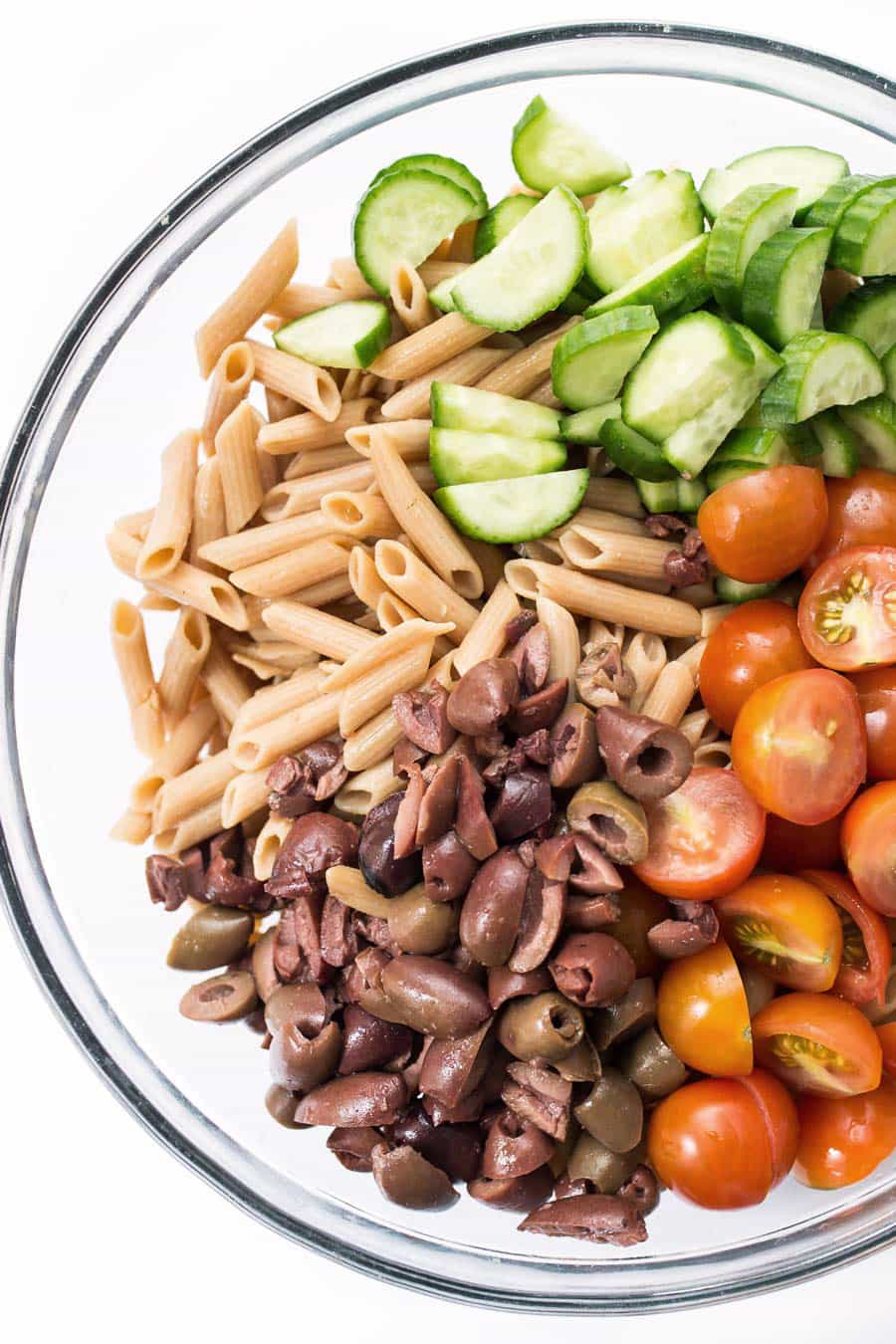 When I came up this recipe, I was trying to do something a little bit different than the traditional pasta salad because, in all honesty, I've never really liked pasta salad.

But this time, it was everything I could have wanted – perfect aldente pasta, crunchy veggies, salty olives and a tangy creamy sauce that was 100% plant-based. 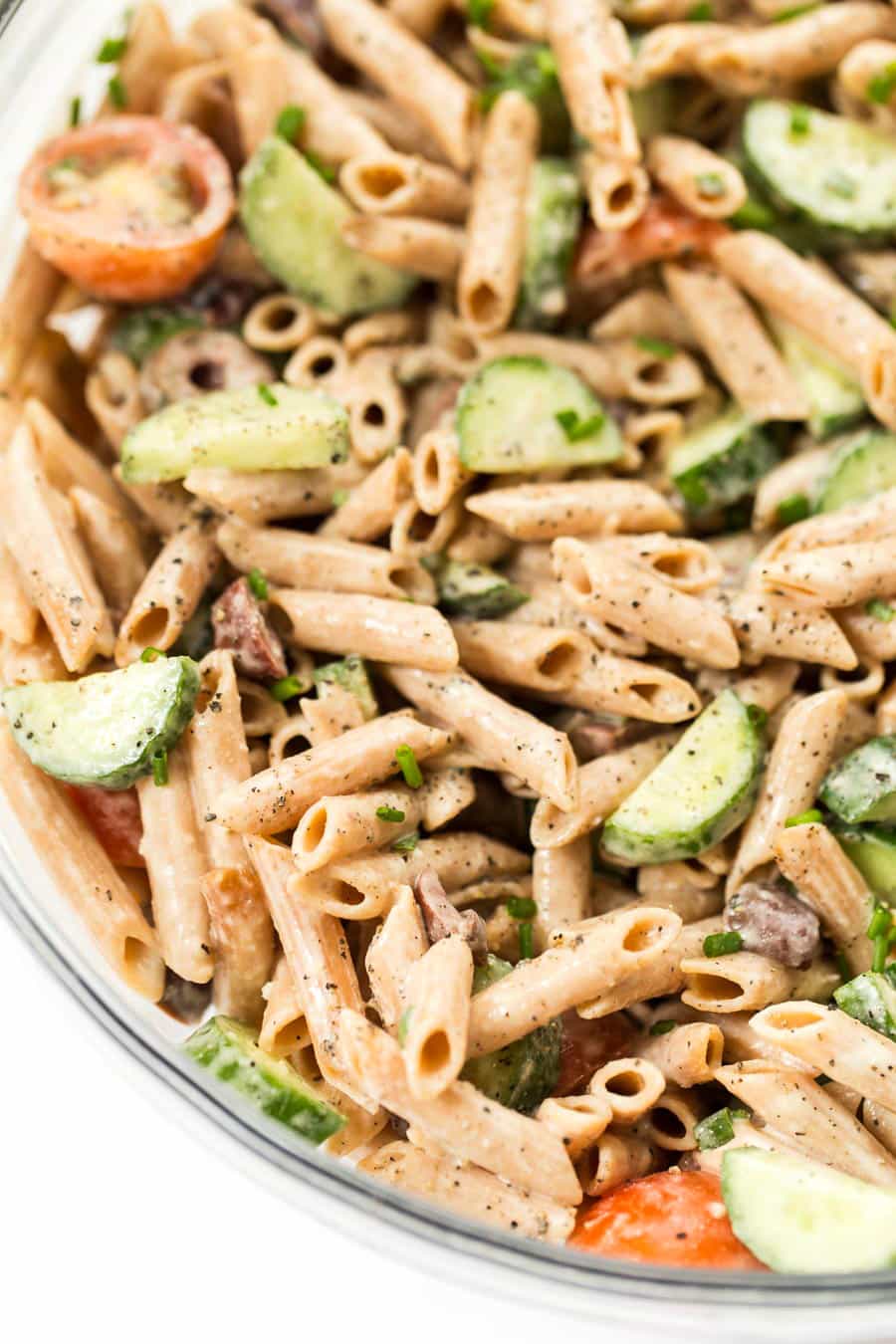 I know I talk a lot about plant-based eating on the blog, but I think one of the most common misconceptions is that you can't get enough protein eating a plant-based diet. So I try and always make a point to sneak in some sort of protein into every one of my recipes so you're left feeling full and satisfied.

One of my favorite plant-powered secret weapon? Hummus.

You guys know I've had a longtime love affair with hummus, but it really is an amazing ingredient. Of course, you can eat it as a snack or spread it on some toast, but one of my favorite ways to use hummus is in sauces and dressings. 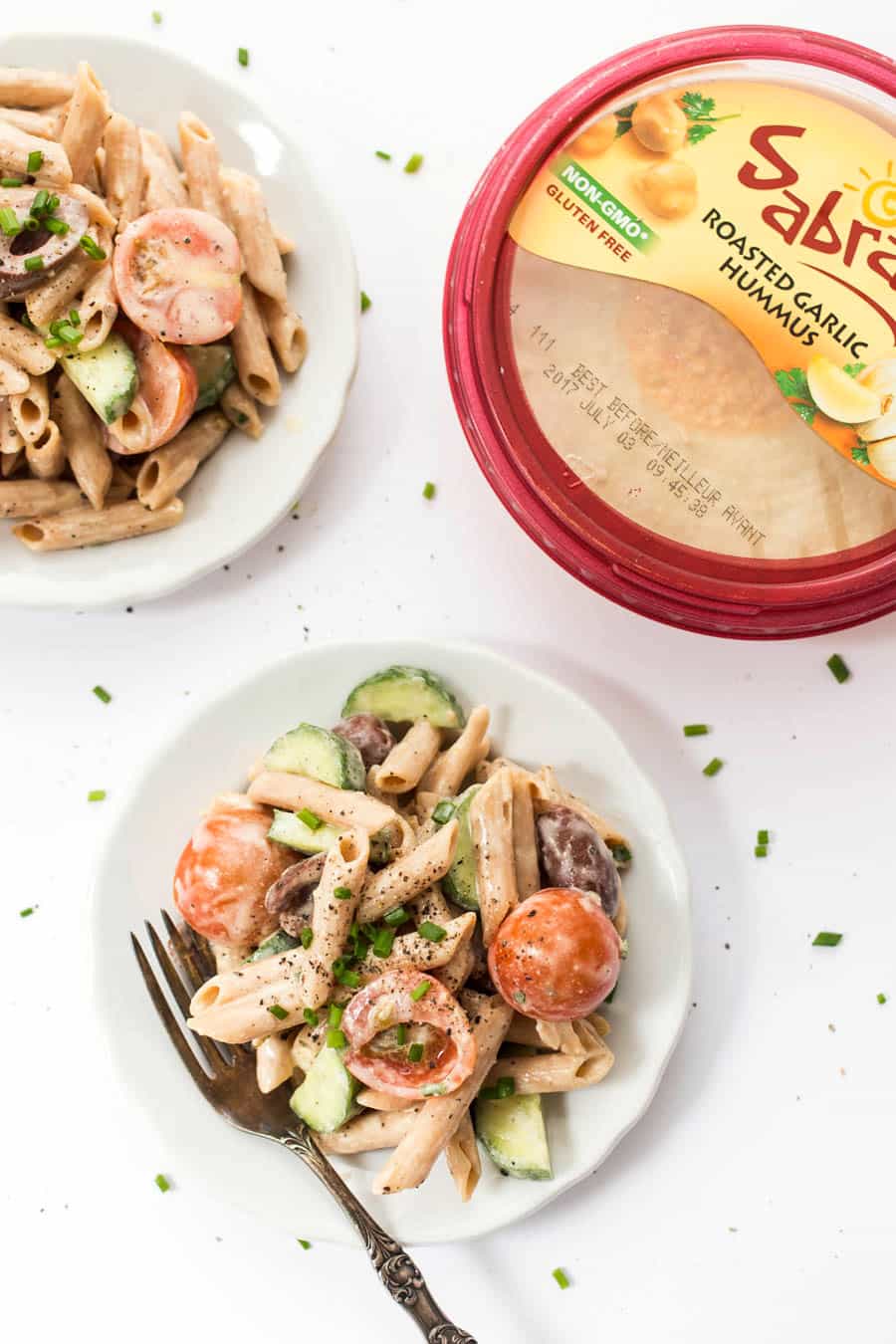 For today's recipe, I'm using Sabra's Roasted Garlic Hummus to make this sauce pop with flavor and help get it super creamy.

I've talked a lot about how much I adore the entire Sabra line of products, and you guys know that I only share companies and products that I truly believe in, but partnering with them just took on a whole new meaning for me. This past April, I had to pleasure of taking a trip down the Richmond, Virgina to meet with the Sabra team, learn more about their product development process, and also talk about a new initiative they are taking on as a company.

While we were down there, the Sabra team told us about their new program called Plants with a Purpose. This is initiative is centered around community engagement with the goal of helping to alleviate Food Deserts in the United States. If you're unfamiliar with that term, a Food Desert refers to neighborhoods and towns that do not have access to fresh, healthy, affordable food (specifically fruits and vegetables). And it's estimated that more than 23 million Americans live in these impacted areas.

What Sabra didn't realize was that Richmond Virginia, the home of their hummus manufacturing facility and nearly 600 employees, is described as the largest food desert in the country for a city its size. So in 2016, they decided to start tackling this issue head on, but instead of just donating money to an organization, they decided they would have the most impact by solving the problem on the ground. 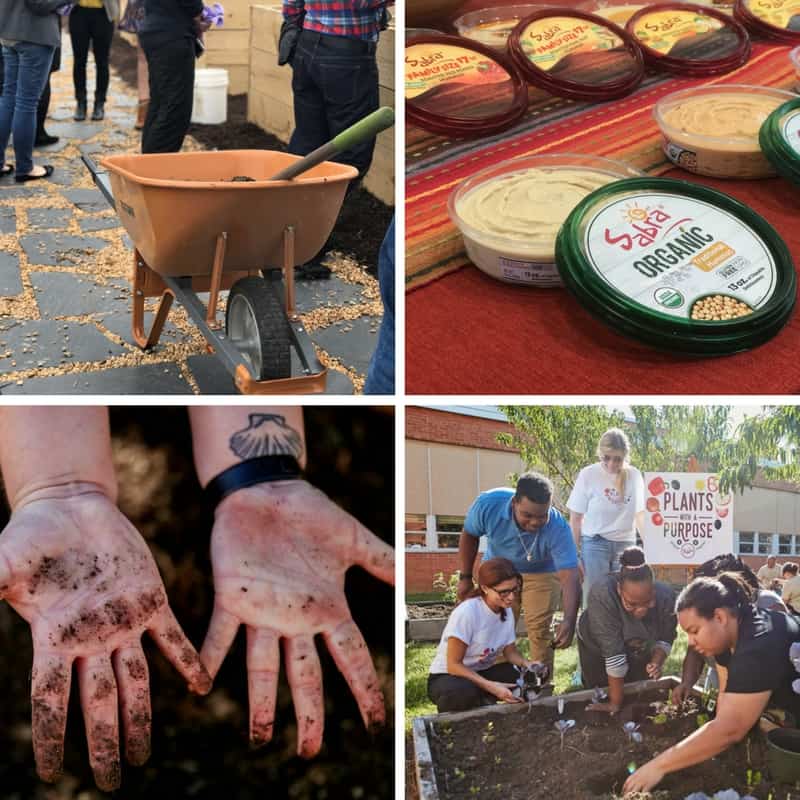 They created an organic employee work-share garden on Sabra's campus where they grow fresh vegetables. The on-site garden, along with their support for community engagement, the planting of community gardens, nutrition, and culinary education programming, is all coordinated with a local non-profit dedicated to urban agriculture in underserved Richmond, VA, communities.

And what I found to be so inspiring is that they're actually making a visible difference. We got to put our hands in the dirt and plant tomatoes and peppers, knowing that as these plants grow, this food is going to be distributed to people who don't have regular access to things like tomatoes. It's truly amazing and I am so proud to be partnering with a company who cares about their community and employees as much as they do. It's really something special!

If you want to learn more, you can head over to their Plants with a Purpose page and sign up for updates on what they're doing! 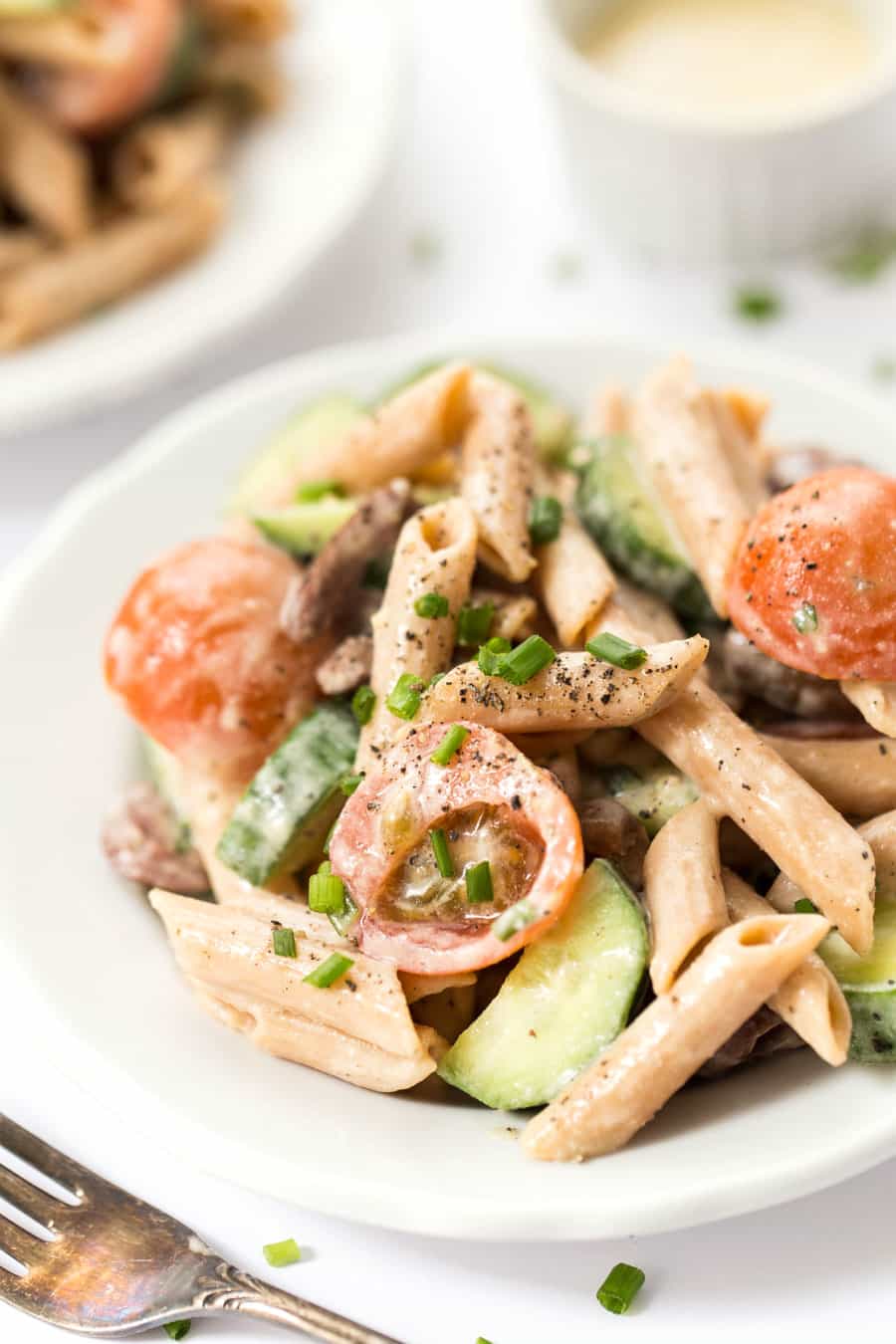 Now…let's finish up our pasta salad!

We're using a base of gluten-free pasta (I like red lentil or chickpea pasta), as well as the classically Greek ingredients:

Tossed in the roasted garlic & coconut yogurt dressing? This salad is heavenly. It's the perfect, plant-powered meal to take with you on a picnic, or serve at a BBQ or even make as a meal prep recipe! Not to mention it's simple to make and tastes even better the next day as it marinates in the flavors. 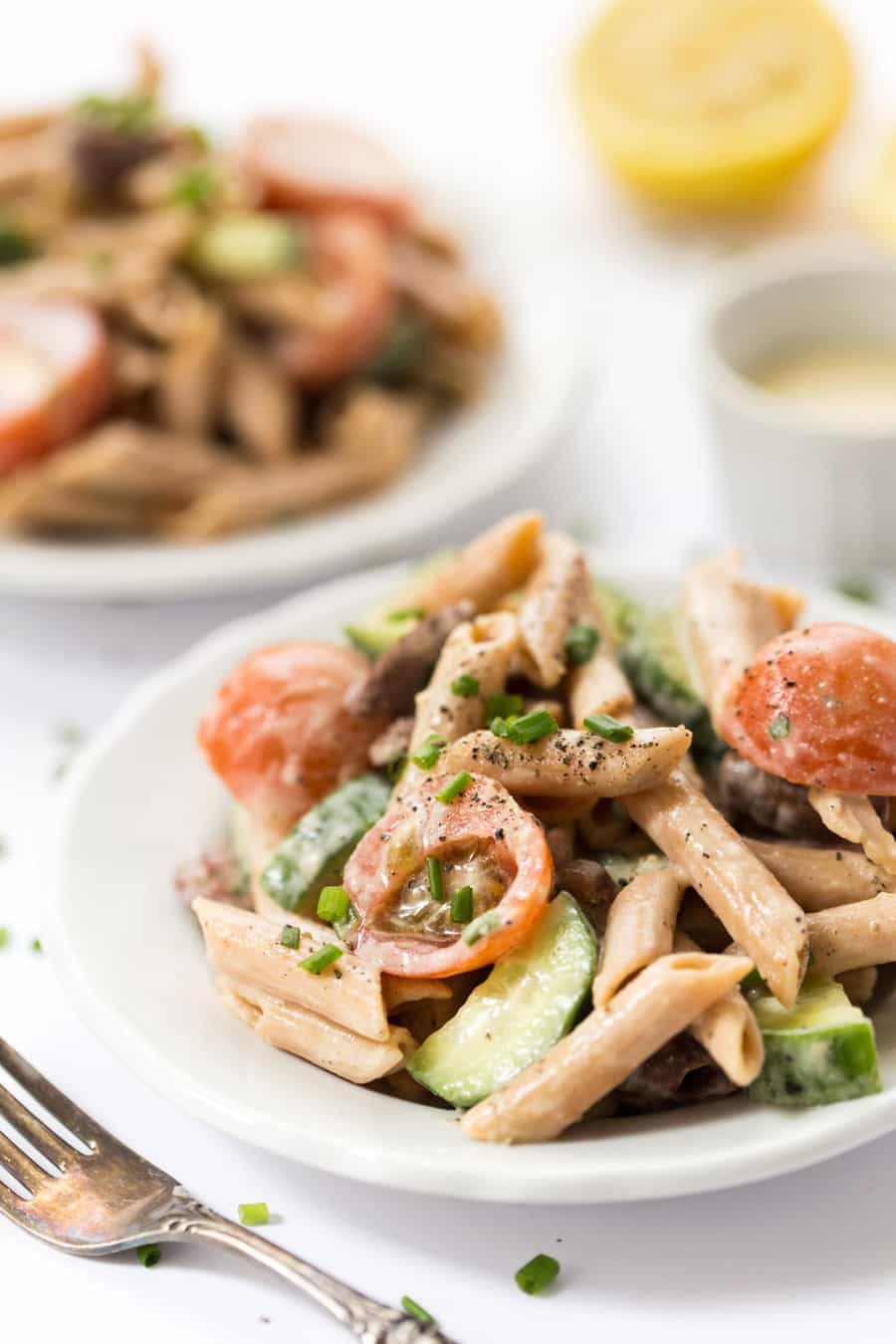 This recipe is brought to you in partnership with Sabra. As always, all opinions are my own. I only share companies I love and trust, so thank you for continuing to support Simply Quinoa!