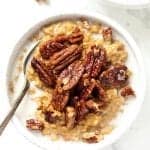 This creamy, pumpkin steel cut oatmeal is rich, 100% vegan, and bursting with flavor from caramelized pecans. It’s an easy and healthy breakfast recipe that you can make in half an hour.

This pumpkin oatmeal is one of my favorite fall breakfast recipes. It’s hearty and mouthwatering, and caramelized pecans give it the perfect burst of sweetness. Not only that, but it’s an entirely plant-based breakfast!

Autumn is one of the best times to be in the kitchen. Winter squashes are popping up the shelves at the markets, and brussels sprouts, apples, and root veggies are making their way into my meals. And of course, one of my favorite ingredients: pumpkin!

Pumpkin is often synonymous with baked goods, but today we're turning it into the most glorious breakfast treat. This vegan oatmeal recipe might become your go-to for a weekend treat … or it might become a weekday breakfast staple in your kitchen!

Be sure to scroll to the bottom of the page to see the exact quantities for each ingredient.

What Are Steel Cut Oats?

This vegan pumpkin oatmeal recipe is remarkably easy. It only has a few steps, and it takes about 30 minutes.

Boil the oats. Put the steel cut oats and the almond milk in a saucepan, and bring it to a boil.

Season. Stir in the pumpkin, vegan butter, salt, pumpkin spice, and some of the coconut sugar.

Cook the oats. Simmer the oats on low for 25-30 minutes. Stir the oats occasionally.

Caramelize the pecans. Put the rest of the coconut sugar and the coconut oil in a pan and heat. When the sugar is melted and shimmering, add the pecans. Cook until they’re caramelized, which will take about 3 minutes.

Serve. Serve up the pumpkin steel cut oatmeal while it’s still hot, and top with the caramelized pecans.

Here are a few tricks to ensure that your vegan steel cut oatmeal is perfect every time.

One of the things I love about steel cut oats is that you can make them ahead of time and reheat them! Since they've got a heartier texture than rolled oats, they can be refrigerated and reheated without any issue. Keep this breakfast in an airtight container in the fridge for 3-4 days, and reheat on the stovetop or the microwave.

Store the caramelized pecans separately, in an airtight container. They’ll last 3 weeks in the fridge, or 1 week on the counter. They don't need to be reheated.

Can This Recipe Be Frozen?

Absolutely! Store the steel cut oats and caramelized pecans separately, in airtight containers. They’ll last for 6 months in the freezer, and can be reheated directly from the freezer.