This Spicy Green Mexican Quinoa recipe goes with everything! Wrap it up in a burrito, serve with grilled chicken, or top it with an egg. You can't go wrong! 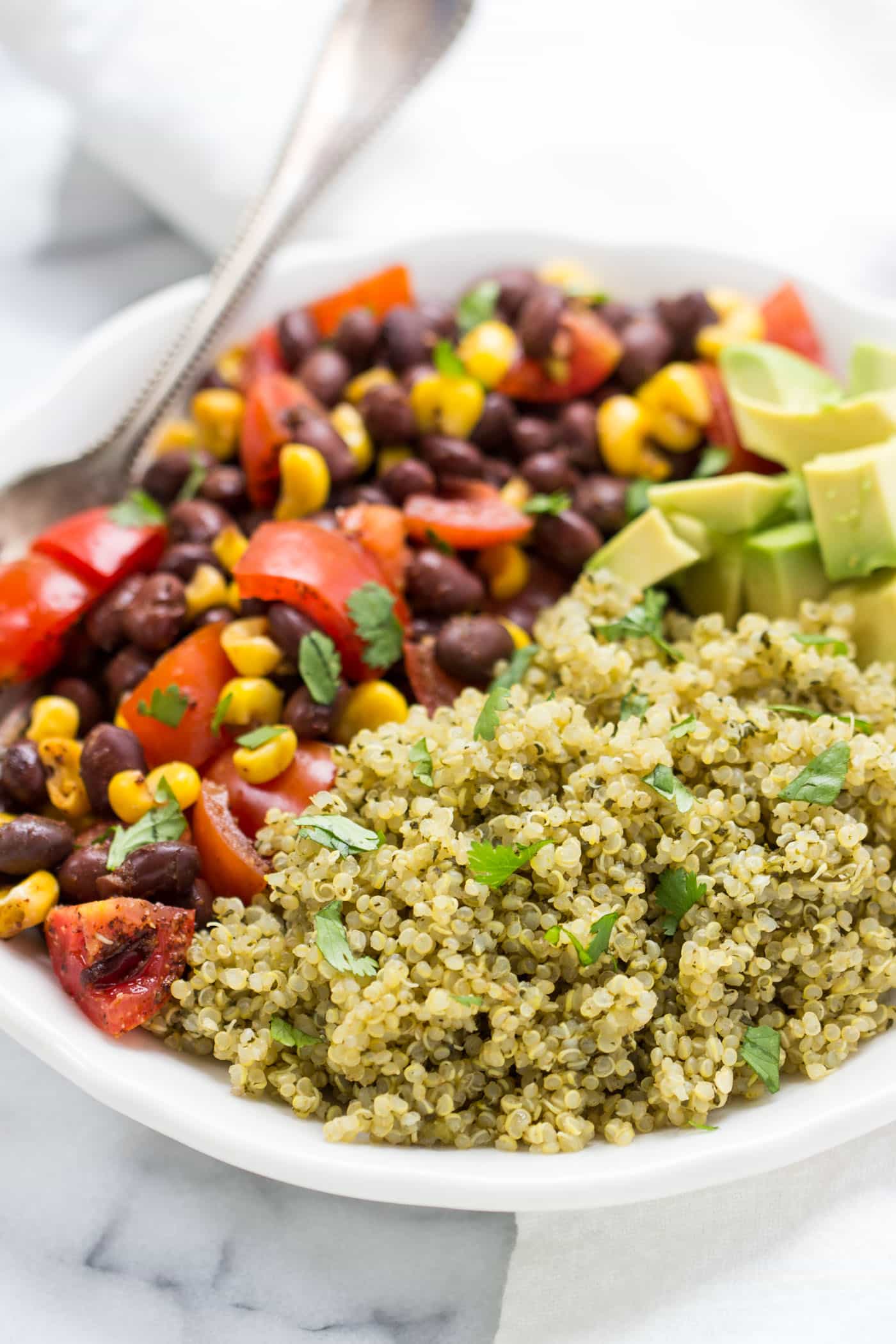 I couldn't resist passing up another holiday without giving you a recipe to celebrate the occasion. While quinoa isn't technically from Mexico, it works wonderfully with Mexican-inspired ingredients. In this recipe we're recreating a classic Mexican dish, “Arroz Verde“, and giving it a healthier spin.

Forget the canola oil and white rice, we're sticking with all things green and nutritious with for this recipe. 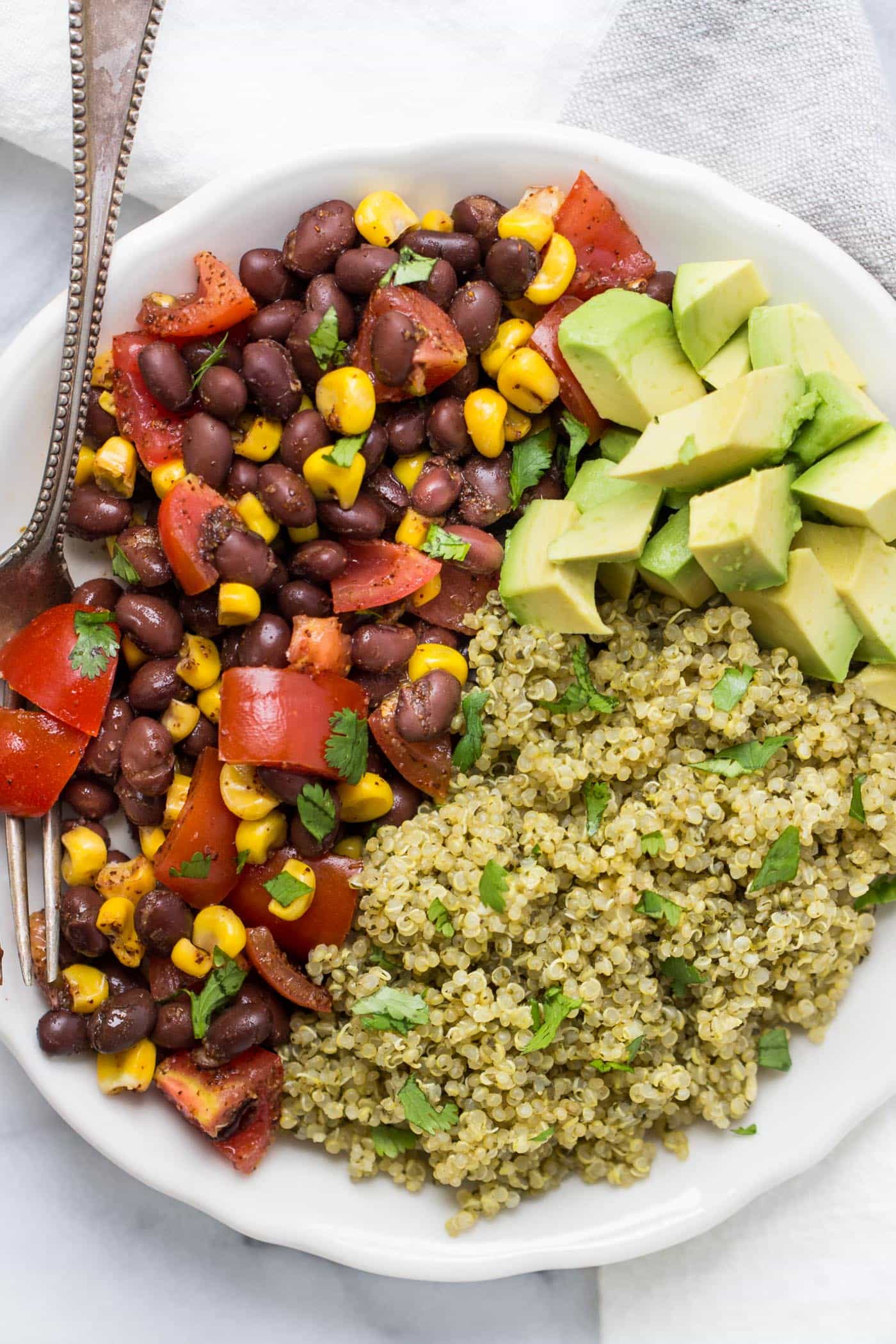 Celebrating with friends/family today? Awesome, because this recipe definitely needs to be on the menu.

And seeing that Cinco de Mayo is today and I gave you zero time to prepare, luckily this recipe is super simple to make. You just need to make a quick verde sauce, stir it into the quinoa then cook it like you normally would and DONE. 5 minutes hands-on time max.

That means you can whip up a batch of this quinoa, throw on your party outfit and be out the door in under 30 minutes. 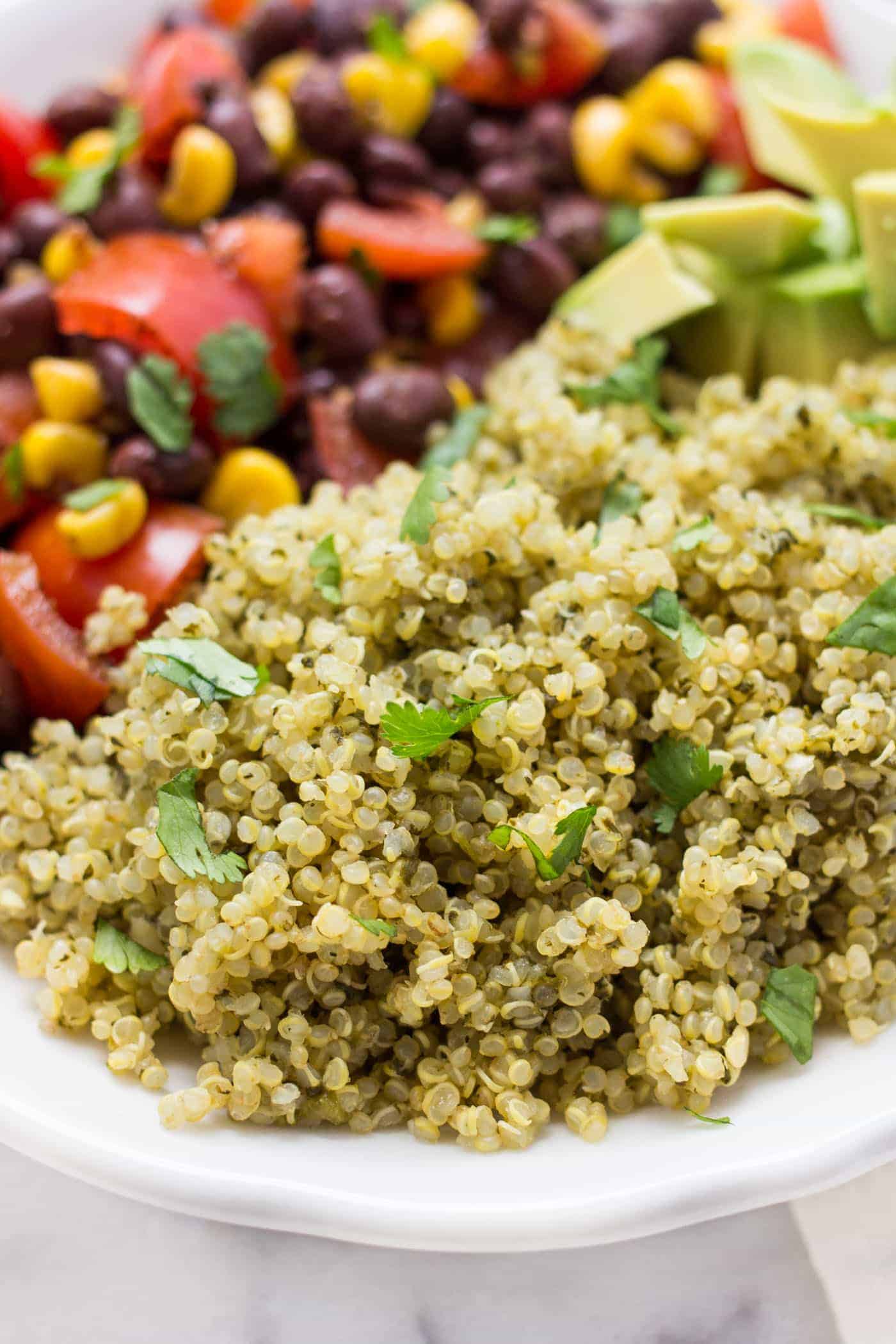 Now if you've ever made Mexican rice before than you know they usually cook it in oil first and then add the water. The oil gives the rice that slightly crunchy texture and nutty flavor. I love the concept of that, but when I tried it with quinoa it was a TOTAL FLOP.

The quinoa was mushy, greasy and seriously disgusting.

So I figure why ruin a good thing? Let's just leave the oil out and cook our quinoa like we normally would, just add in this yummy spicy green sauce. 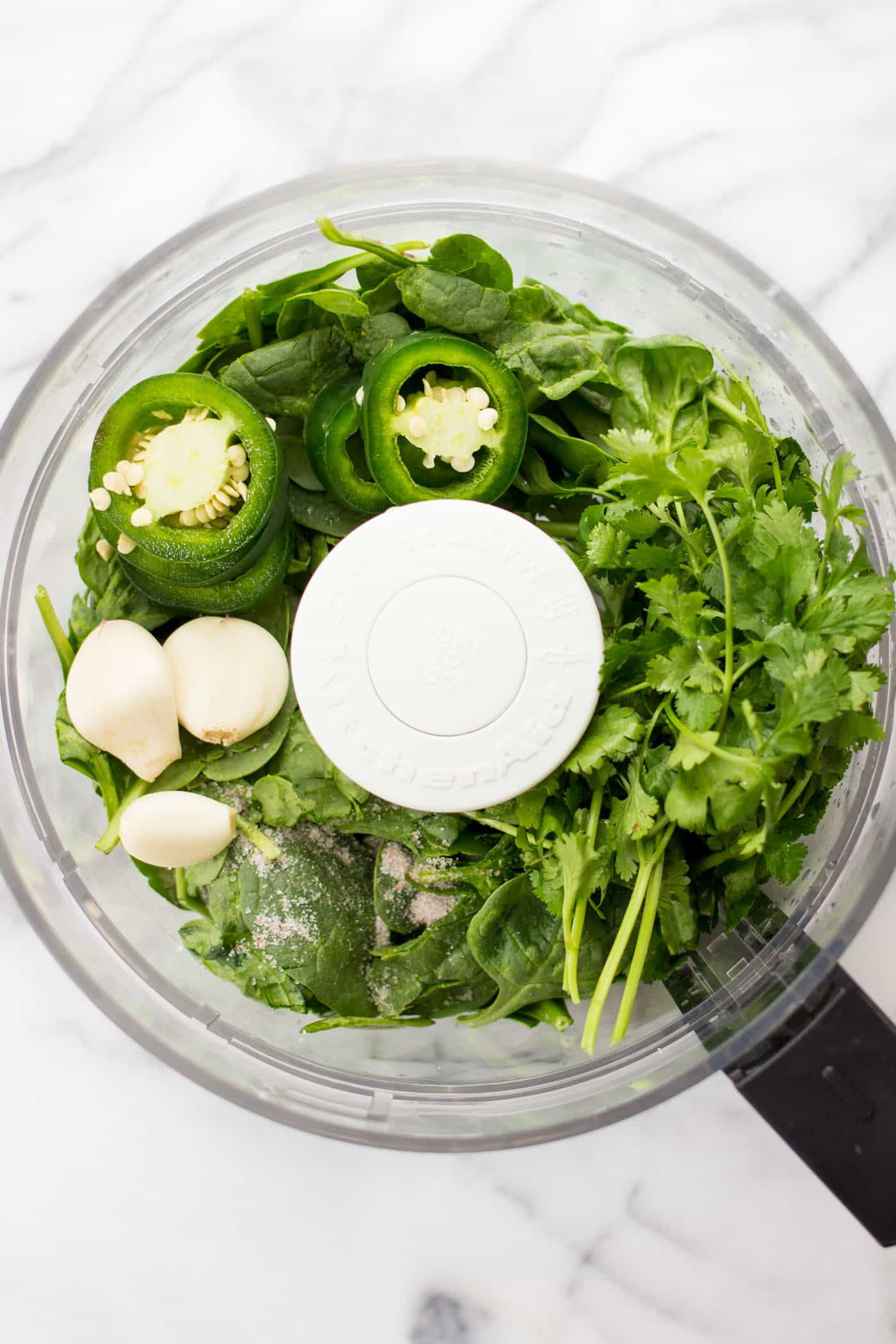 The green sauce starts with spinach, which is very mild in taste but packed with vitamins and minerals. Then there's cilantro (can't have a Mexican dish without cilantro!), a jalapeño pepper, some garlic, some lime and a touch of salt.

You just whiz it up in your food processor and you're done. 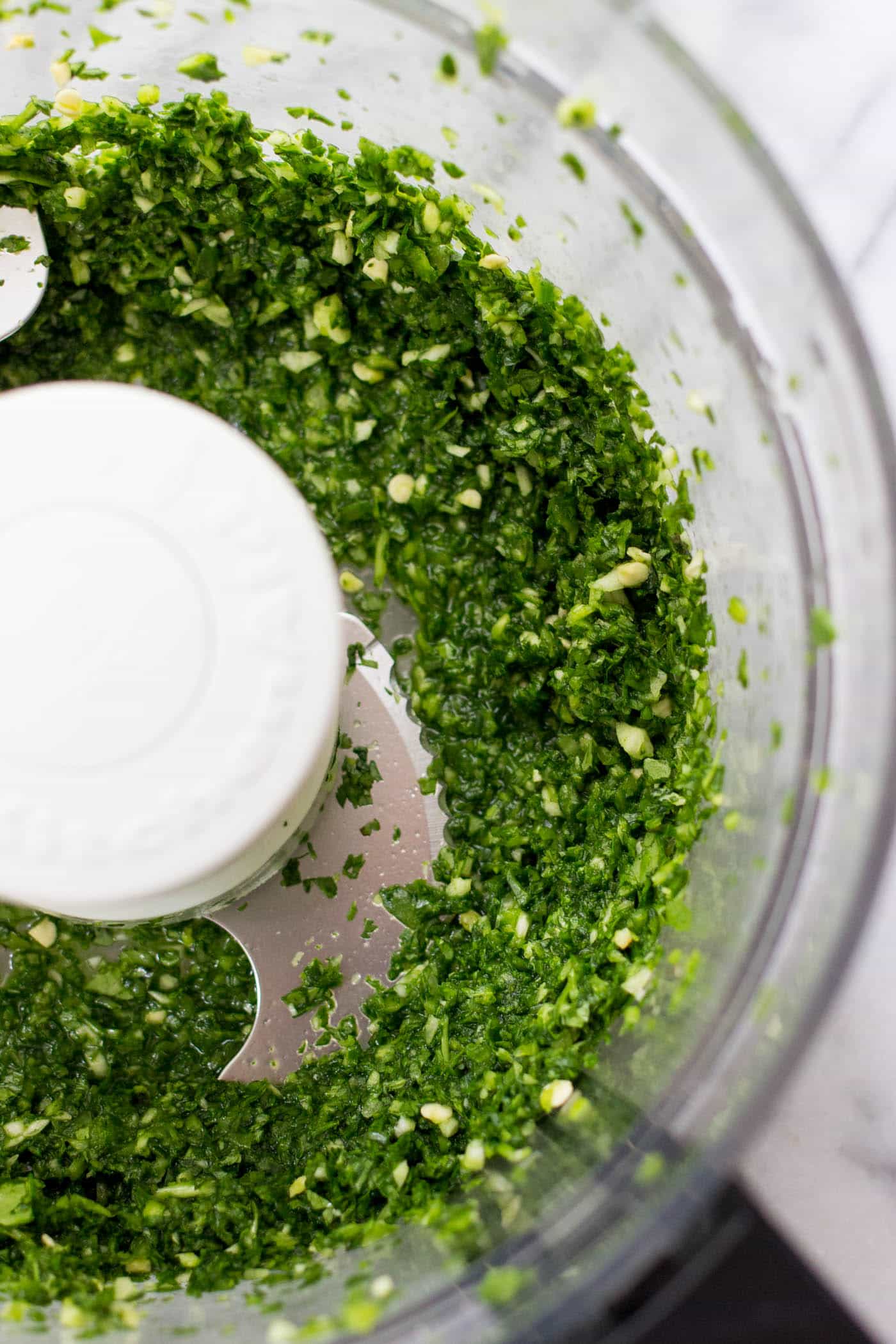 In many of my recipes, I actually start with pre-cooked quinoa. I've talked all about how I love to cook a big batch of quinoa on Sundays and then keep it throughout the week, but not this time. This time we're actually cooking the quinoa in the green sauce. So the quinoa soaks up all that amazing green goodness and holy moly… yum! 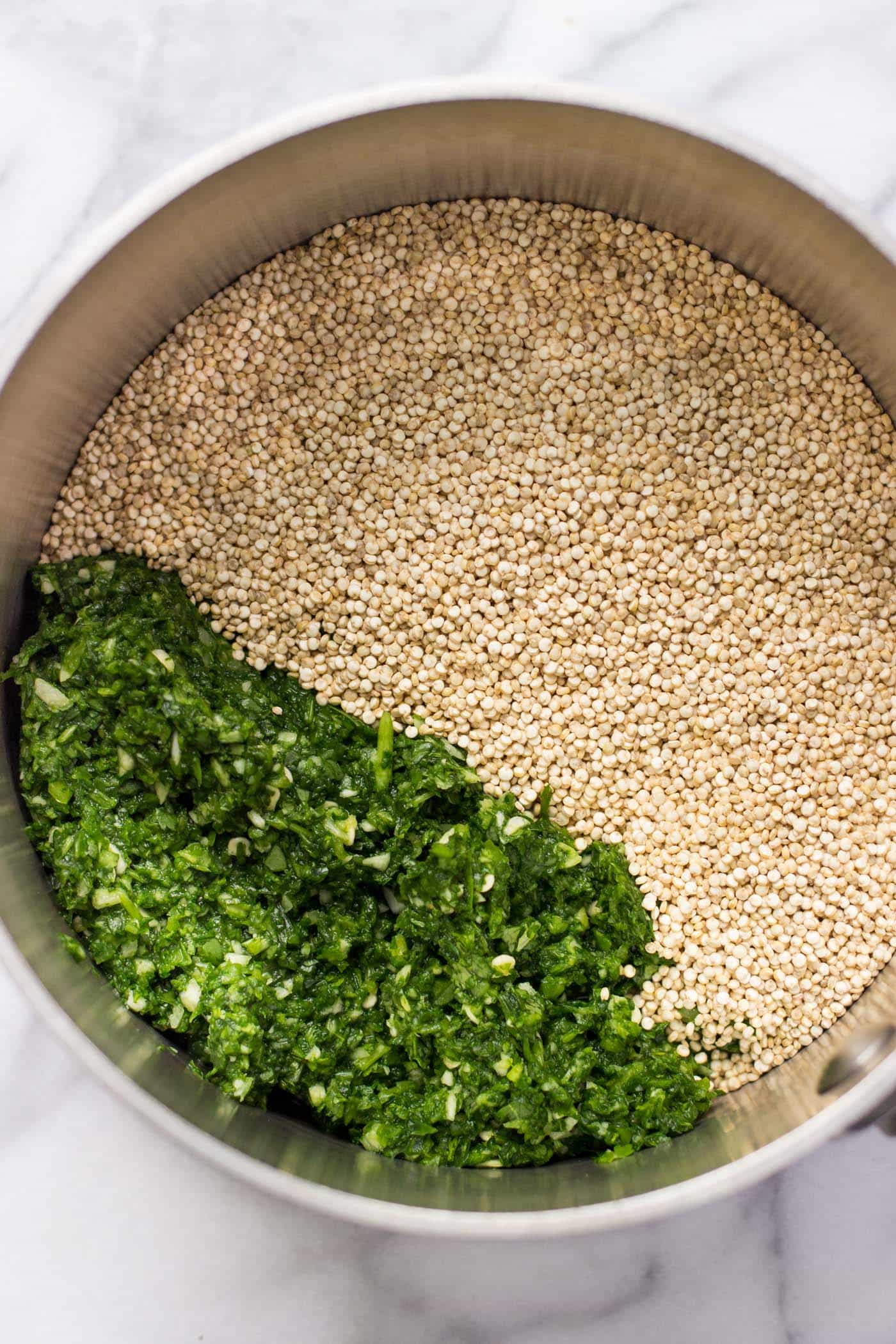 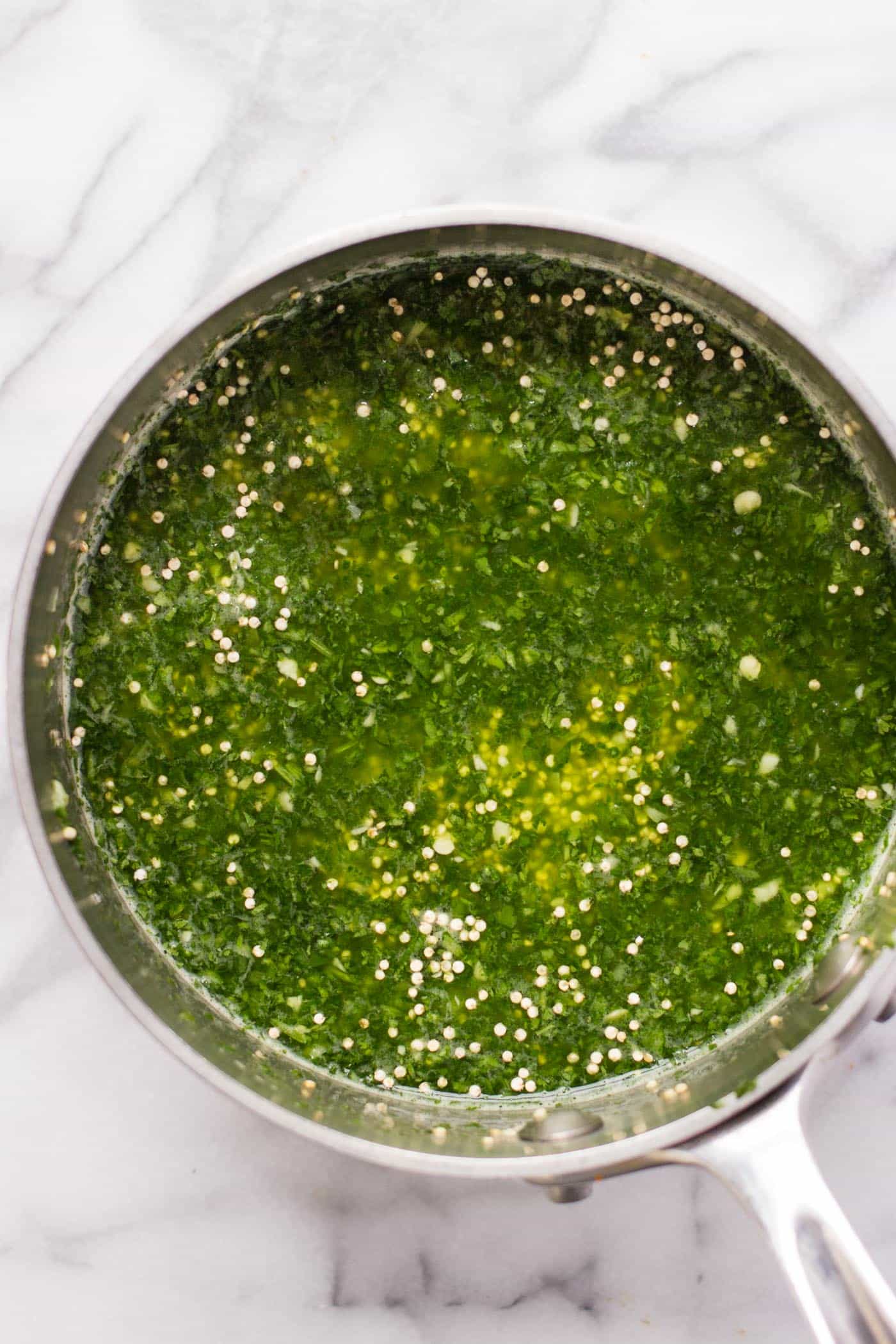 This has got me realizing that I need to do a lot more experimenting with flavoring quinoa as it cooks!

But back to this recipe…what I absolutely love about it, aside from the color, is the flavor. It's not overly spicy – I think the quinoa actually mellows it out a bit – but it has an underlying bite that goes so well with pretty much any type of Mexican dish you can imagine. I served mine with a quick black bean salad (in the recipe below!), but you could also serve it with:

It's super versatile and kind of reminds me of Chipotle's cilantro lime rice, but spicier and less salty. So good! 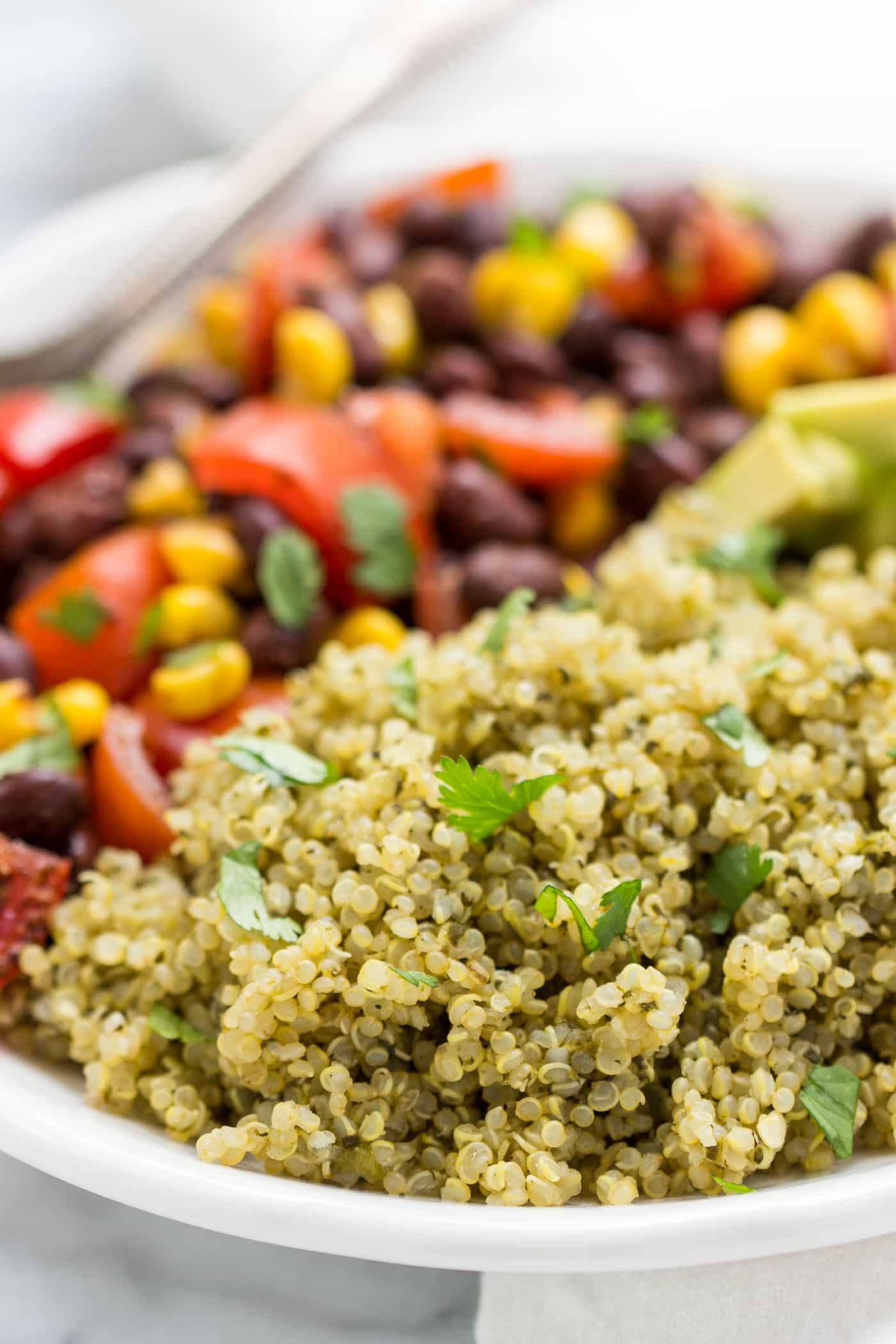 So now that we have the perfect dish to serve with all our favorite Mexican meals, I think it's time for you to go off and celebrate. And if you're reading this after Cinco has passed, take a moment and celebrate you. Because you're here, reading this recipe, making a healthy choice and nourishing your body with whole foods. You should be celebrated to, friend ❤

Have you ever tried flavoring your quinoa as it cooks? What is your favorite method?! I'd love to know as I really want to try out some new methods. Share in the comments below 🙂 Next up for me is going to be coconut water and maybe turn it into a breakfast bowl. YUM!

p.s. this recipe is totally perfect for packing up and taking with you to a party or potluck! I packaged mine up in this glass containers (which I'm obsessed with) and took it over to up parents house! 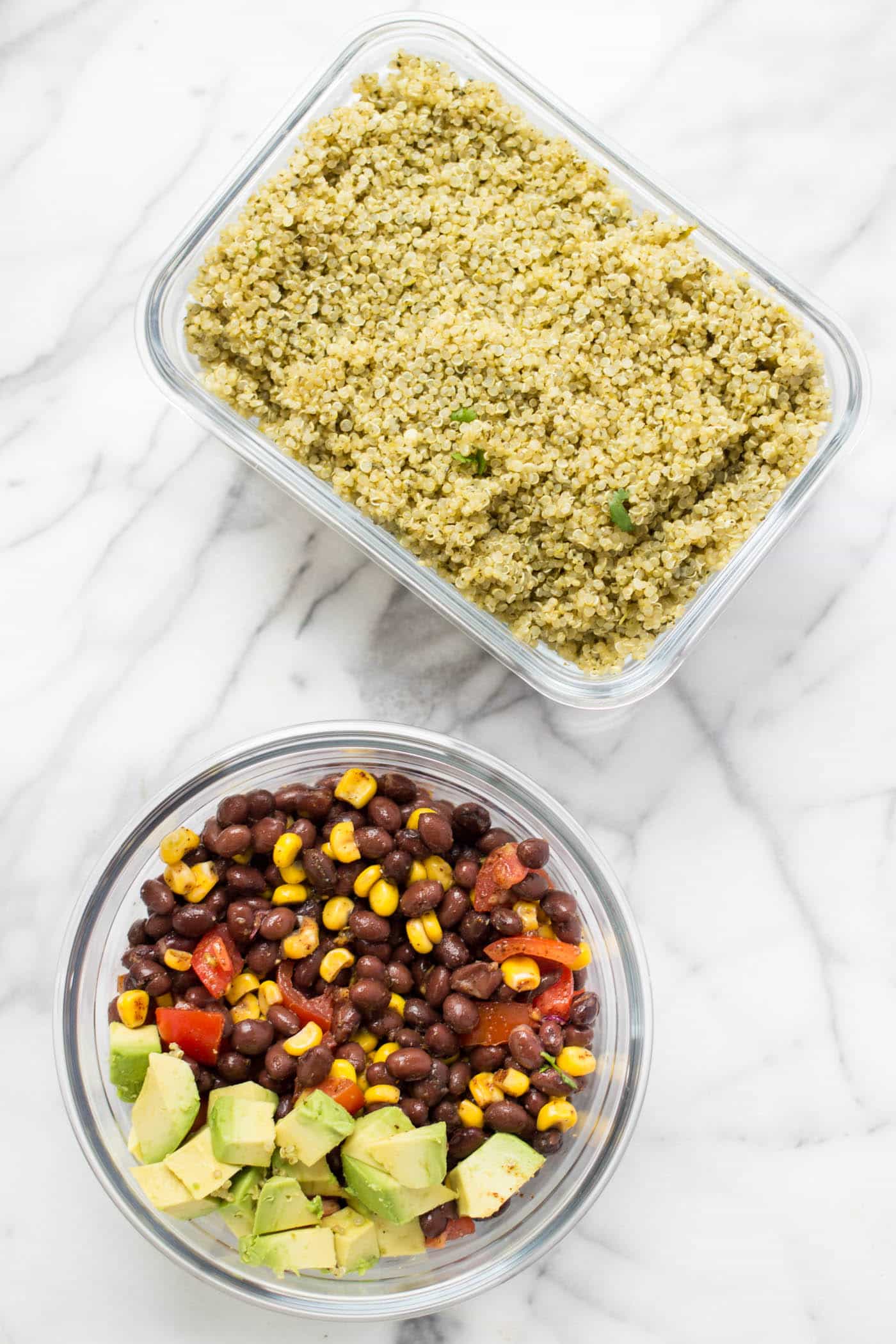 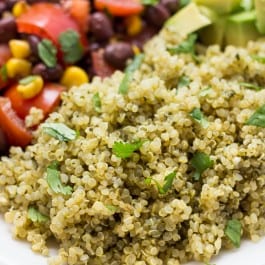 adapted from Pinch of Yum