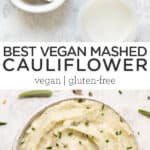 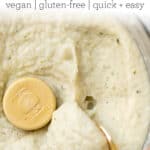 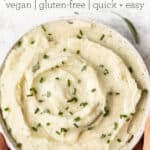 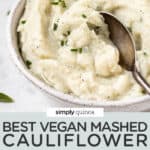 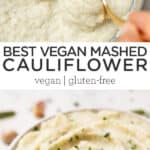 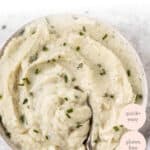 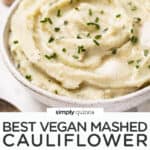 This is hands down the BEST vegan mashed cauliflower you'll ever taste. It's creamy, buttery, and flavorful, without being watery at all. It's easy to make and absolutely delicious!

I've been working on this recipe for vegan mashed cauliflower for years. Legit years!

I first tried it a few years ago when cauliflower was becoming the “it” ingredient of the time. Cauiflower was making its way into everything and I was really here for it. I even love adding cauliflower to my smoothies!

What is Mashed Cauliflower?

First, you might be wondering what said trend that I'm referencing even is. If that's you, let me explain. Mashed cauliflower is a dish meant to mimic mashed potatoes. But instead of the potatoes, it's cauliflower instead.

It's difficult to hide the “cauliflower” nature of this recipe, but with the additions we've got in today's recipe, you can barely tell the difference!

What You Need for This Recipe

There isn't much you need for this recipe, but each element is key:

How to Make Vegan Mashed Cauliflower

This is also quite a simple recipe which I know you always appreciate. Here's how to make it:

First we need to steam the cauliflower. I use a steamer basket inside a large pot and let it steam for about 5 minutes.

While the cauliflower is steaming, we're going to saute the garlic in some olive oil. This really helps to elevate the flavor and is NOT a step to miss. If you add the garlic in raw, it just won't ever taste as delicious.

Once the cauliflower is tender and the garlic is cooked, you'll blend it all together in a food processor until it's smooth.

From there, you're done and ready to serve!

This honestly is one of the best recipes I've ever made and I don't say that lightly. Nor am I saying it to toot my own horn. I've tested this recipe on multiple people and everyone has had the same reaction.

My mom requested it for her 60th birthday dinner and when my brother tasted it he said it was one of the best things I'd ever made.

It's definitely going to be a staple in our Thanksgiving festivities and I for one am thrilled that I can get my fam to eat more veggies without putting up a fight!

More Ways to Use Cauliflower

This is hands down the BEST vegan mashed cauliflower you'll ever taste. It's creamy, buttery, and flavorful, without being watery at all. It's easy to make and absolutely delicious!
Prep Time 10 minutes
Cook Time 15 minutes
Total Time 25 minutes
Servings 6 servings
Calories 84kcal
Print Pin 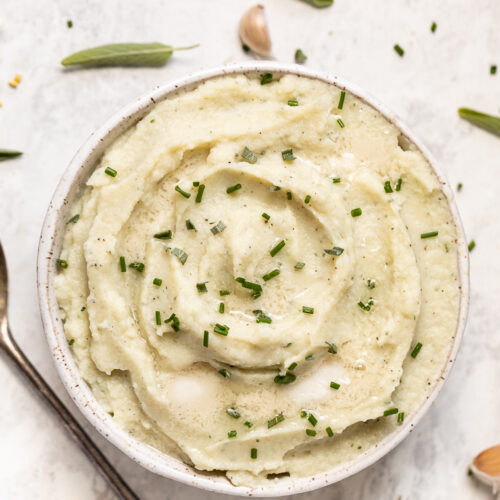