This white bean mushroom veggie burger recipe is the best you'll ever try! They're meaty, easy to make, perfectly seasoned as well as vegan and gluten-free! 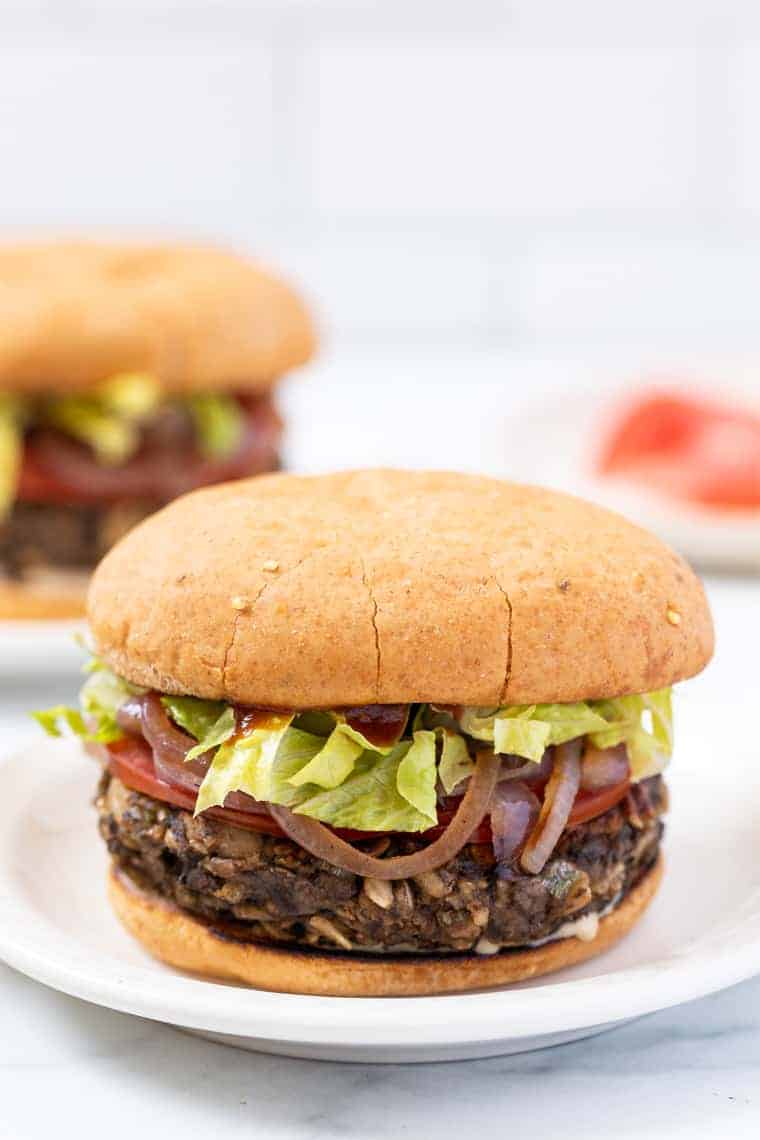 I've been trying to create the perfect mushroom burger for years. Yes, YEARS! And I've finally nailed it!

Just a quick little story: the recipe inspiration for these burgers goes all the way back to the first year I went gluten-free (like 10+ years ago). I had a white bean mushroom burger at a restaurant in Vermont and it was amazing. My mom and I have talked about them for years and I've never been able to totally recreate it. Until now!

These White Bean Mushroom Veggie Burgers are flavorful, packed with healthy ingredients, and have an awesome meaty texture. They're delicious on their own, but can also stand up to all sorts of toppings (we served them on the BEST gf buns ever!). And they're actually super easy to make too! 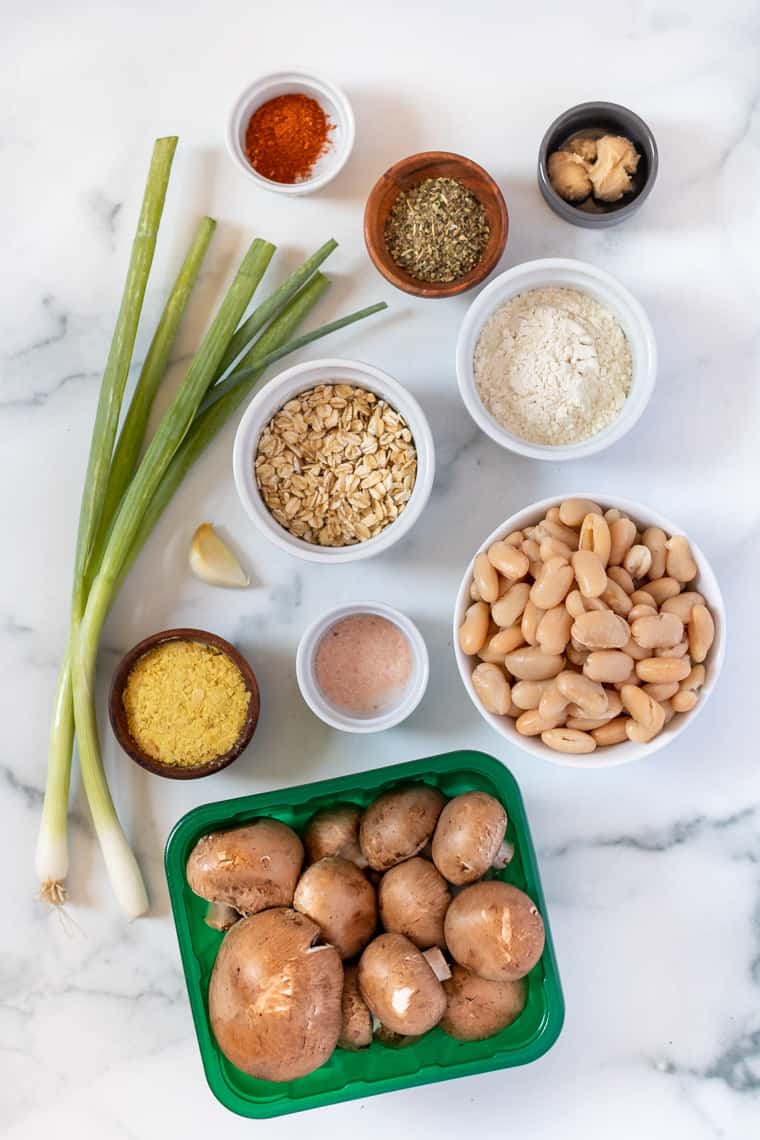 Ingredients for our Mushroom Veggie Burger

What I think you're going to love about these burgers is the ingredient list. It's fairly short – with the bulk being mostly in the flavorings. It's also totally customizable based on what you like, but we'll chat more about that in a sec.

For now, let's check out what makes up the base of these delicious burgers:

And then for our seasonings, we use miso paste, Italian seasoning, harissa, nutritional yeast, and sea salt. 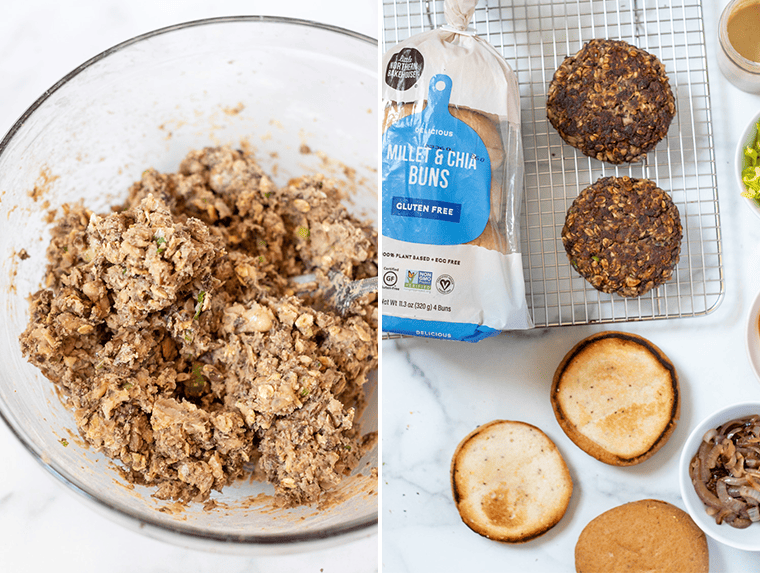 Unlike most of my other veggie burgers, I think you'll be happy to see that these don't need a food processor!! You just need a cutting board and a bowl to make them.

We'll start by chopping our mushrooms. Make sure you stem them and remove any extra dirt from the outside using a paper towel. Then you just gotta chop them! watch this video to see how finely I chop them up.

Stir in your scallions and garlic. Then add your white beans. You'll use a fork to mash the white beans in the bowl as much as possible. It will turn kind of into a paste and the “dough” will start to form.

Add the rest of your ingredients and mix it all together! The dough should hold together if you form it into a patty, but it will still be sticky/wet. That's okay! Put them on a parchment paper-lined baking sheet or plate and pop them in the fridge. You'll chill them for at last 60 minutes which will help them hold their shape while cooking.

Cooking! We have two methods of cooking the burgers – searing or baking – and we'll detail each in the recipe box. 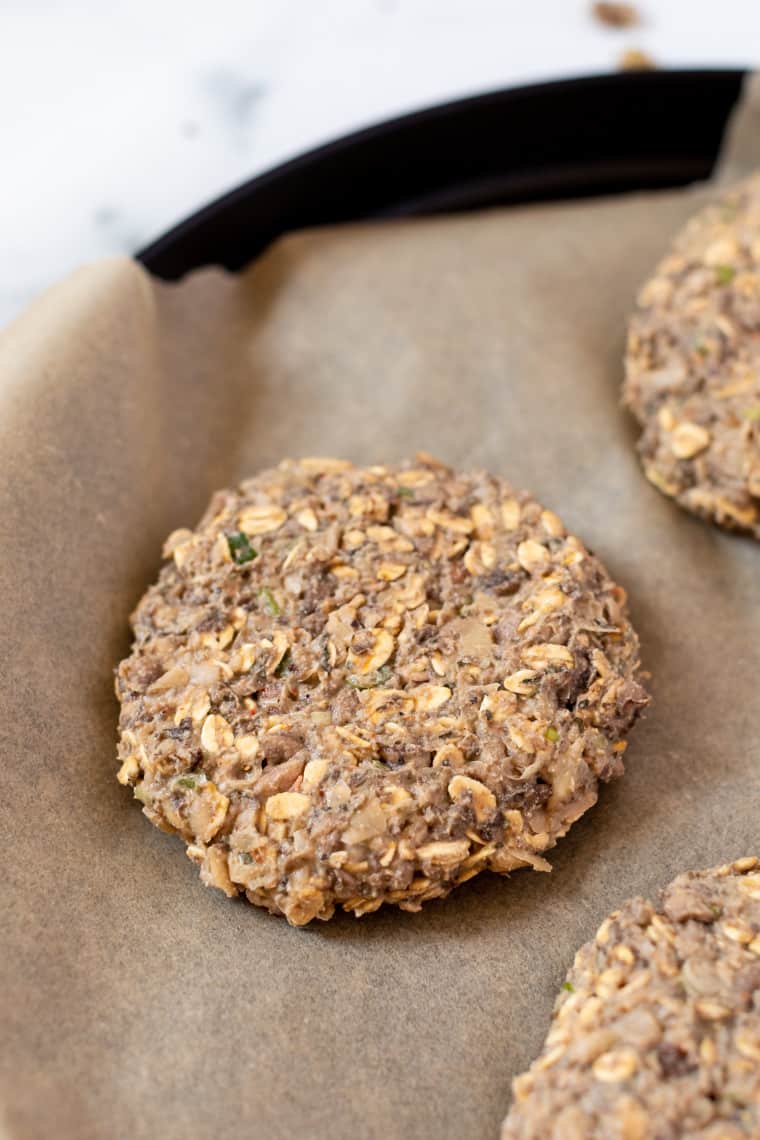 There are a few different methods for cooking veggie burgers:

For me, there are two that stand out on that list: baking and searing.

Throughout all my years of making veggie burgers, I've found that the absolute best way to cook them (so that they stick together) is to bake them. Baking your veggie burgers will give you that nice crunchy outside and soft inside. It will dry them out a bit so they're not mushy, and it will ensure they're cooked all the way through.

Searing can also be great, but in order for it to really work well, you need to chill your veggie burgers first. Chilling allows the dough to hold it's shape better and helps you avoid a crumbly mess.

Grilling is just trick all around. Unless you grease your grill SUPER well and have a fairly hard/non-sticky burger, they'll likely fall apart. The only way I've had luck is to bake them and then finish them on the grill. 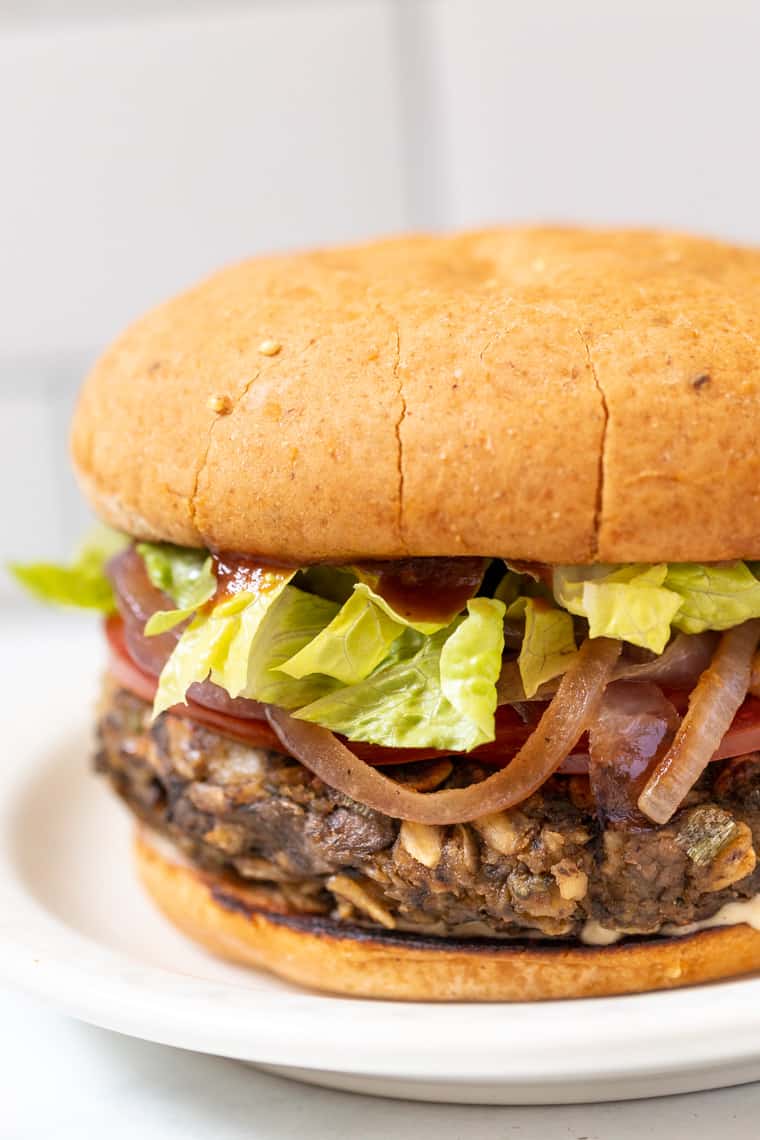 How to Serve This Mushroom Veggie Burger

Now for the fun part…assembly!!

First things first, you need a good bun. The best gluten-free hamburger bun I've found is from Little Northern Bakehouse. They're fluffy, toast up beautifully, aren't too heavy, and are everything you'd be looking for a in a gluten-free bun. They're also egg-free, dairy-free, vegan, AND non-GMO which makes them great if you're accommodating multiple allergies. Plus, if you're also grilling up some veggie dogs alongside these amazing burgers, they've got gluten-free hot dog buns as well!

As far as toppings go, honestly, I don't think you can go wrong with any topping combination here! But here is what I used: a toasted Little Northern Bakehouse bun, with a layer of tahini sauce on the bottom bun, followed by the mushroom burger.

On top of that we did:

And then the top bun had a layer of barbecue sauce. I mean…it was PERFECT! 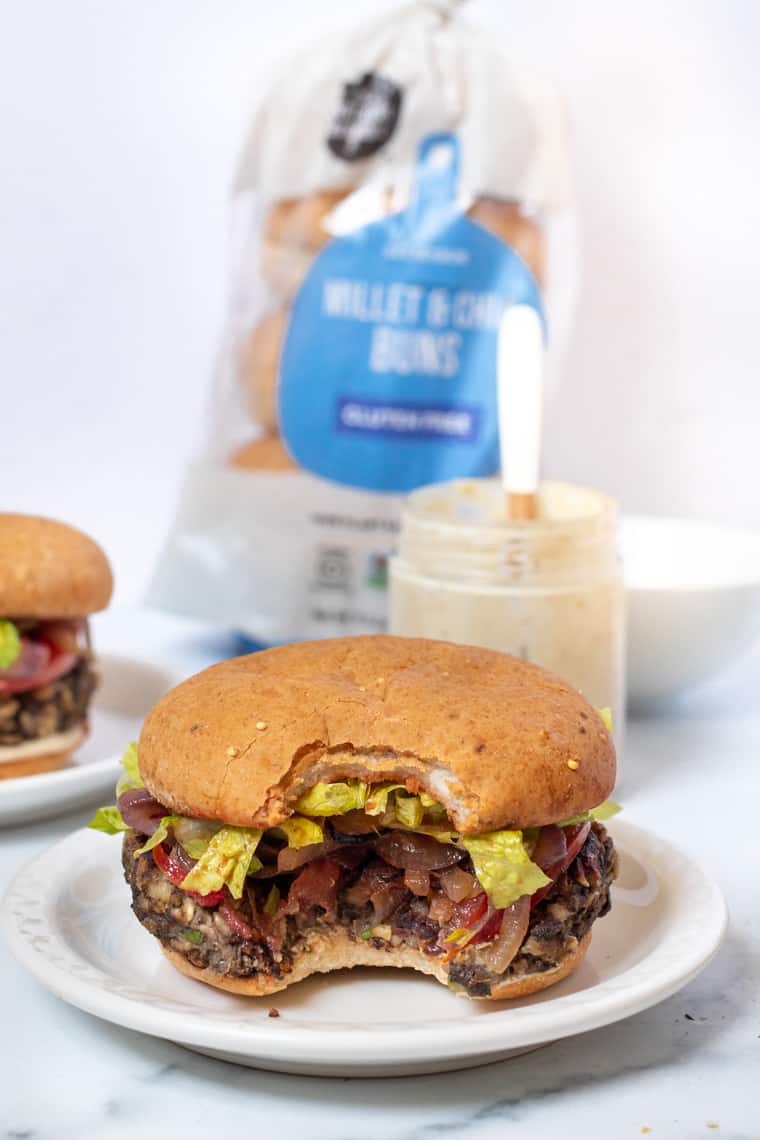 Before I let you go, I like to just finish off our posts by giving you some substitution ideas. Just in case you don't have one of these ingredients, are sensitive, or for whatever other reason, here are some ideas for substituting.

Other than that, you should be GOOD TO GO! If you have any other substitution questions, drop those down below.

I can't wait to hear what you think of this recipe. It's honestly one of my favorite burgers I've made yet – tastes soooo good and has the best texture. You're going to love them! 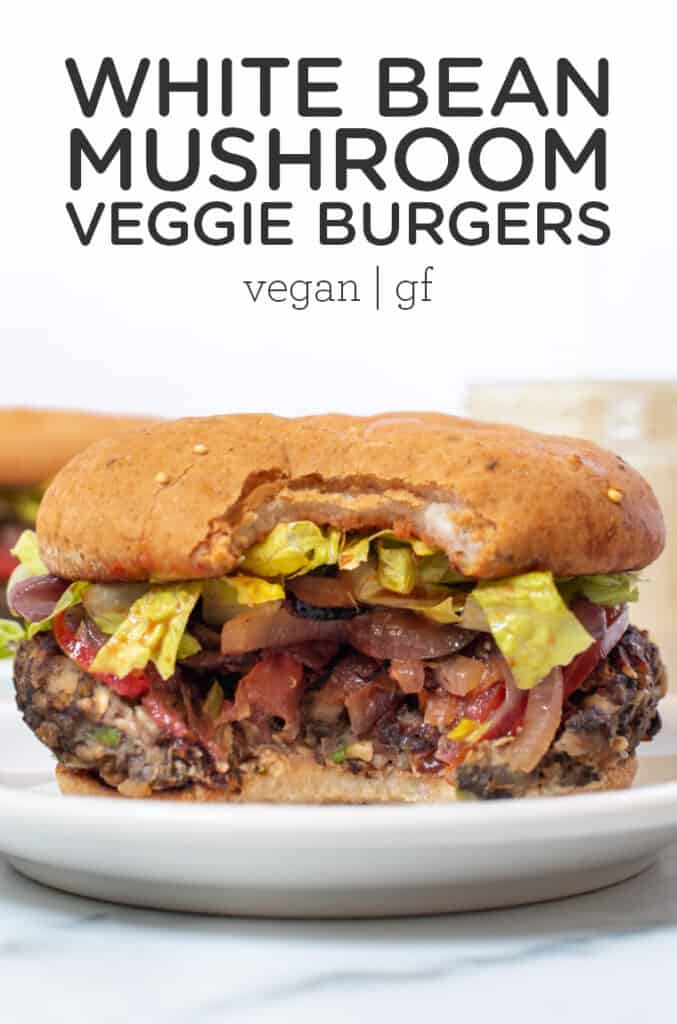 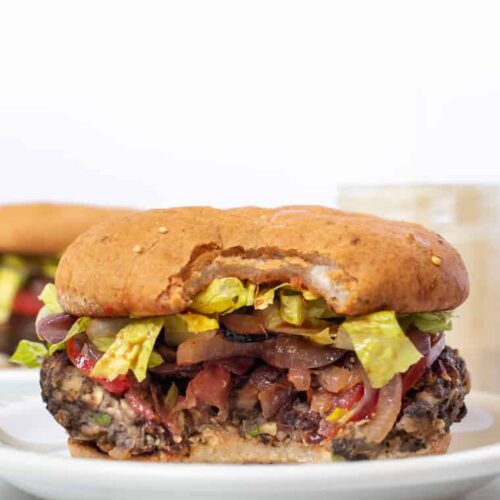 * Burgers can also be baked if you'd prefer! Bake on a parchment-lined baking sheet at 375ºF for 30 - 35 minutes, flipping halfway through. ** Nutrition facts include bun + toppings. 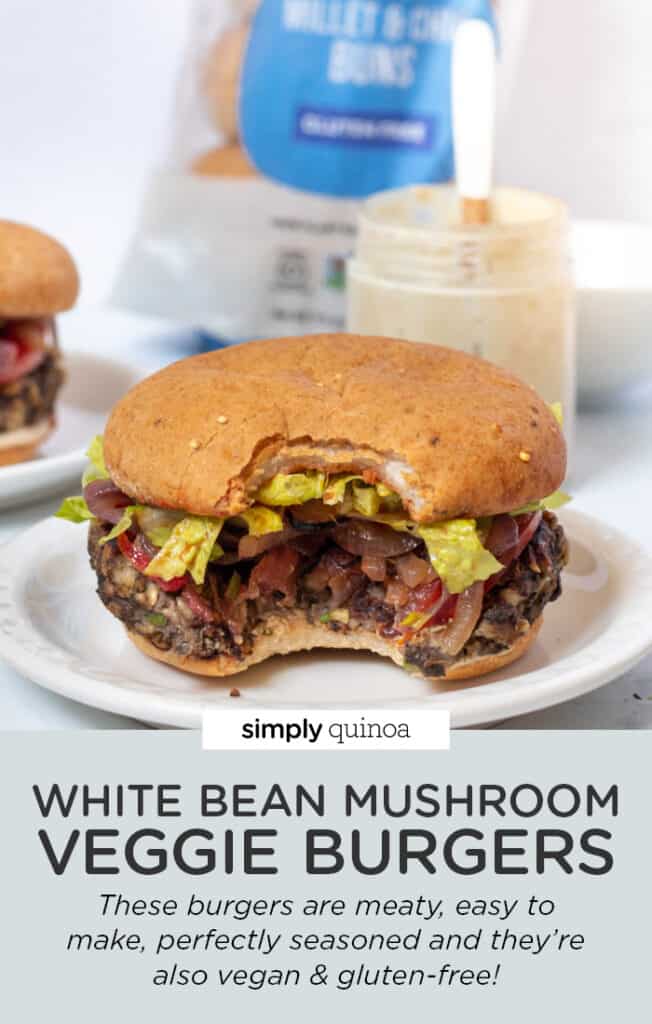 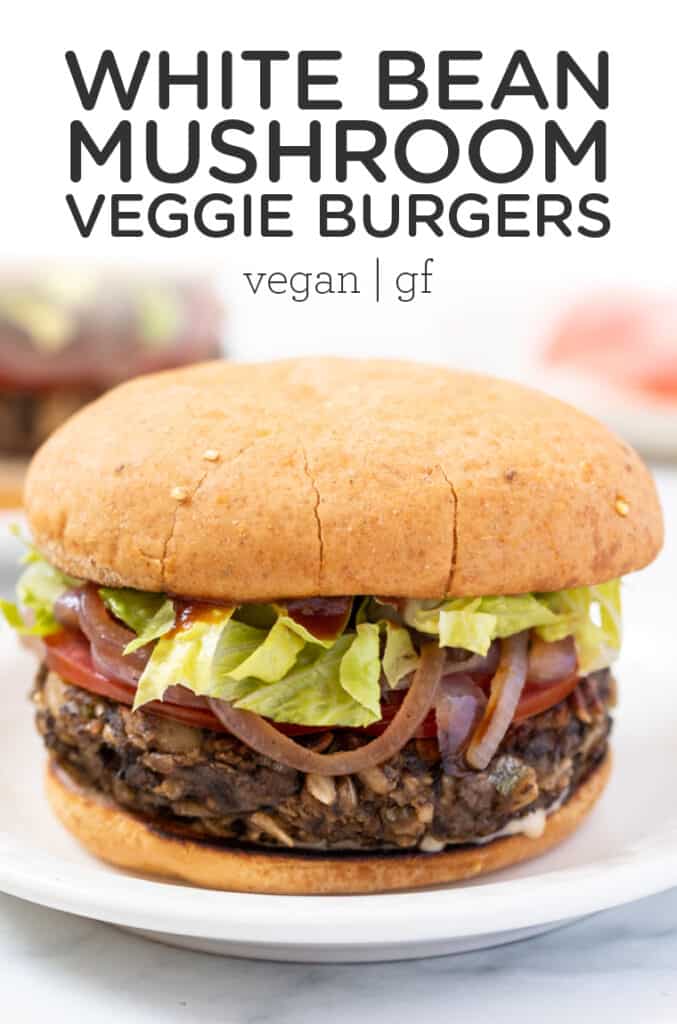