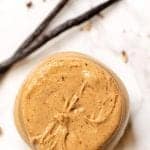 This vanilla bean cashew butter only has 2 ingredients, but you’d never know it from how much flavor it packs. It’s creamy, healthy, and only takes about 20 minutes to make.

I’m a big fan of nut butters, and this vanilla bean cashew butter is the stuff of dreams. The vanilla and nut combination is reminiscent of cookies, and other baked goods … you can’t help but feel like you’re eating a dessert. It even tastes sweet, even though there’s no sugar in the recipe.

Cashew butter isn’t as common as peanut or almond butter, but I think it should be. It’s so rich and creamy, and the perfect base for a flavor like vanilla. This recipe uses a whole vanilla bean, which really brings the most out of the cashews. You'll find yourself spreading it on everything!

This is a very simple recipe, with only 2 ingredients. Be sure to check out the recipe card at the bottom of the page to see the exact quantities.

Why Use a Vanilla Bean?

Most recipes with vanilla use extract instead of beans. Extract is great, but as with most ingredients, you get a better product when you use the real thing. Vanilla beans have a much stronger, richer, and sweeter flavor than vanilla extract, and they’re less bitter as well. You can buy whole vanilla beans at many grocery stores, but if you can’t find any, using a little extract will work.

This recipe only takes about 20 minutes to make. It’s that easy!

This is a creamy and flavorful nut butter as is, but you can make some variations if you want. Here are a few ways to alter this vanilla bean cashew butter.

What to Put Vanilla Bean Cashew Butter On

Now that you’ve made vanilla bean cashew butter, it’s time to use it! But what should you put it on? Here are a few of my favorite ways to eat this creamy vanilla butter.

And if you want to cook with it, here are some recipes that use cashew butter.

You can store this nut butter in an airtight container in the cupboard for up to 3 weeks, or in the fridge for 2 months. Even though it lasts longer in the fridge, I recommend storing it at room temperature so that it’s soft and creamy when you eat it.

Can This Recipe Be Frozen?

Sure! You can freeze this cashew butter in an airtight container for up to 6 months. Thaw in the fridge or at room temperature before eating. The nut butter might separate when it thaws, in which case mix it in the food processor before eating.

If you liked this cashew butter, check out some of my other favorite homemade nut butters. 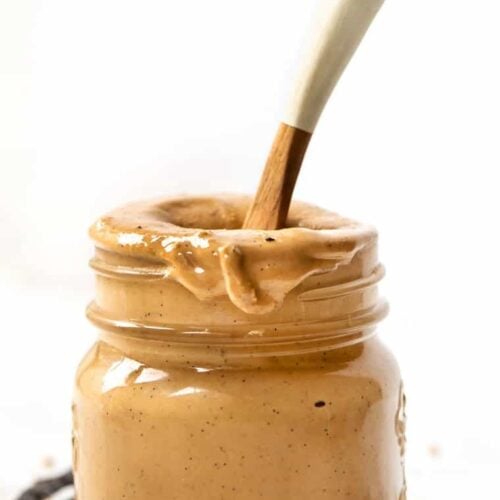 Store in an airtight container in the cupboard for up to 3 weeks, in the fridge for up to 2 months, or in the freezer for up to 6 months.