These simple peach pie breakfast parfaits taste like a decadent dessert, but are nutritious and delicious! Use just 8 ingredients, are gluten-free + vegan! 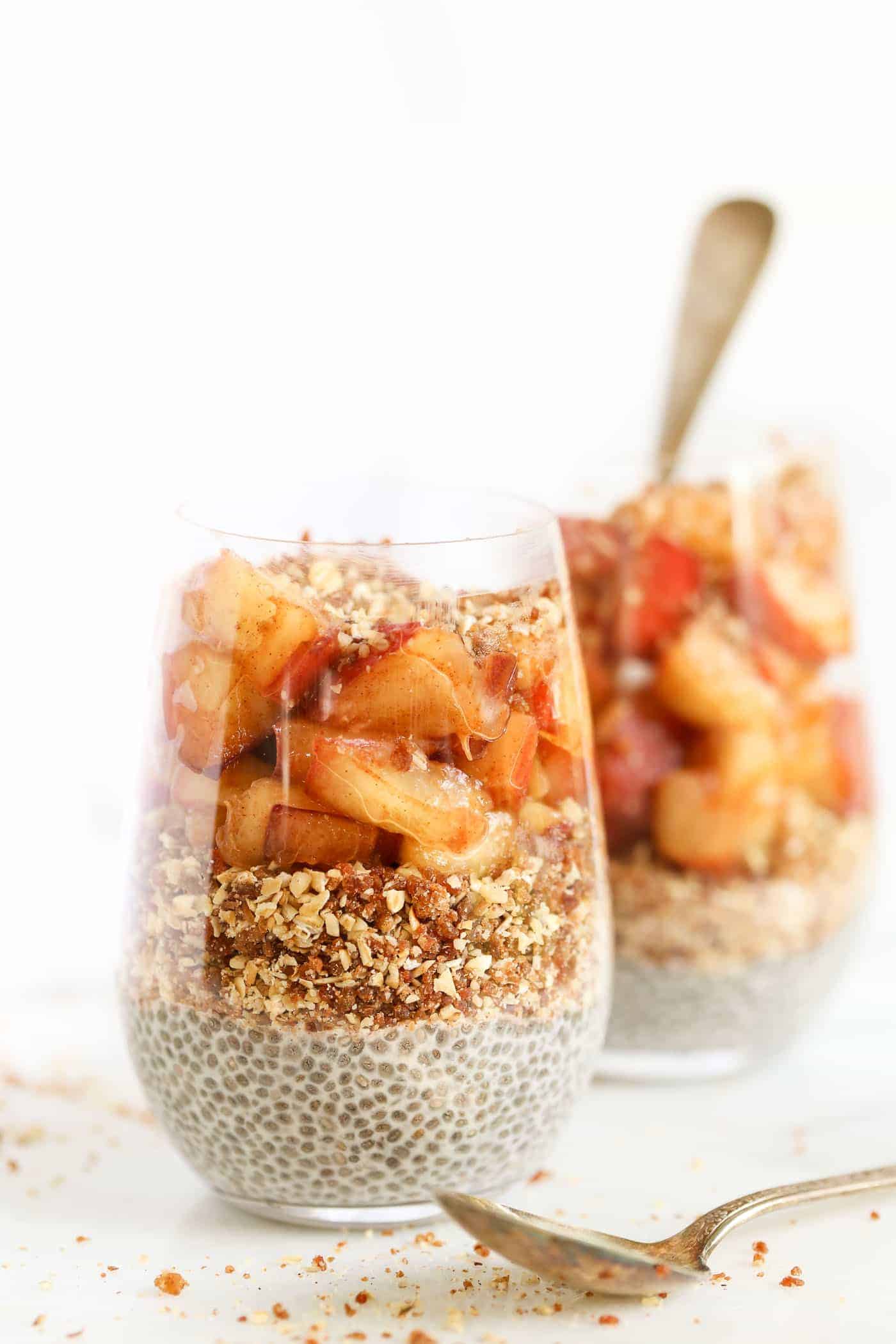 We're in the peak of peach season right now and I have to say this might be one of the best years yet. I probably say that every year, but nothing beats a perfectly ripe peach.

I've been eating at least one peach per day–whether that's in my morning green smoothie bowl, my grilled peach salsa, or my stone fruit crumble for a sweet breakfast–I'm trying to make the most of this season while it lasts. And since I'm sure you're just as enamored with this juicy stone fruit as I am, I wanted to give you a little inspiration while these fruits are cheap and in season.

Today's Peach Pie Breakfast Parfait is a riff on one of my favorite desserts, but with a super healthy twist. We're going with a base of chia pudding, then a oat and date crumble, then cinnamon peaches to finish it off. It's summery, light and the perfect way to start your day.

What I love starting your day with something like this is that a) it feels special with minimal effort, b) it's sweet like a dessert, but won't send your blood sugar on crazy spikes and c) it's filling and provides long-lasting energy throughout the day. 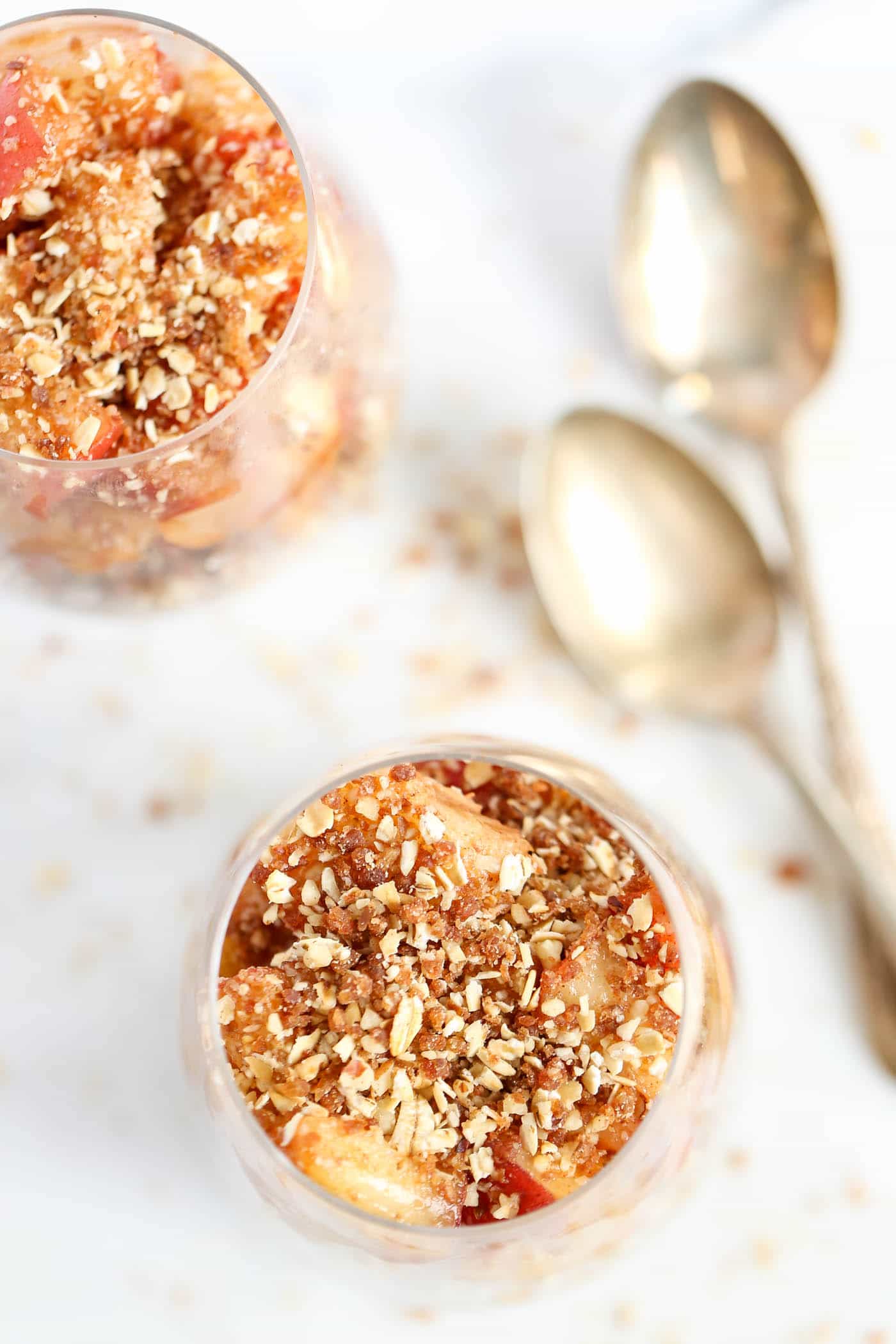 We start with a base of chia pudding, which can be made the night before if you don't want to bother in the morning. I've shown you how to make chia pudding before, but basically you just mix chia seeds, maple syrup and almond milk together, then let it sit for a few hours to thicken. 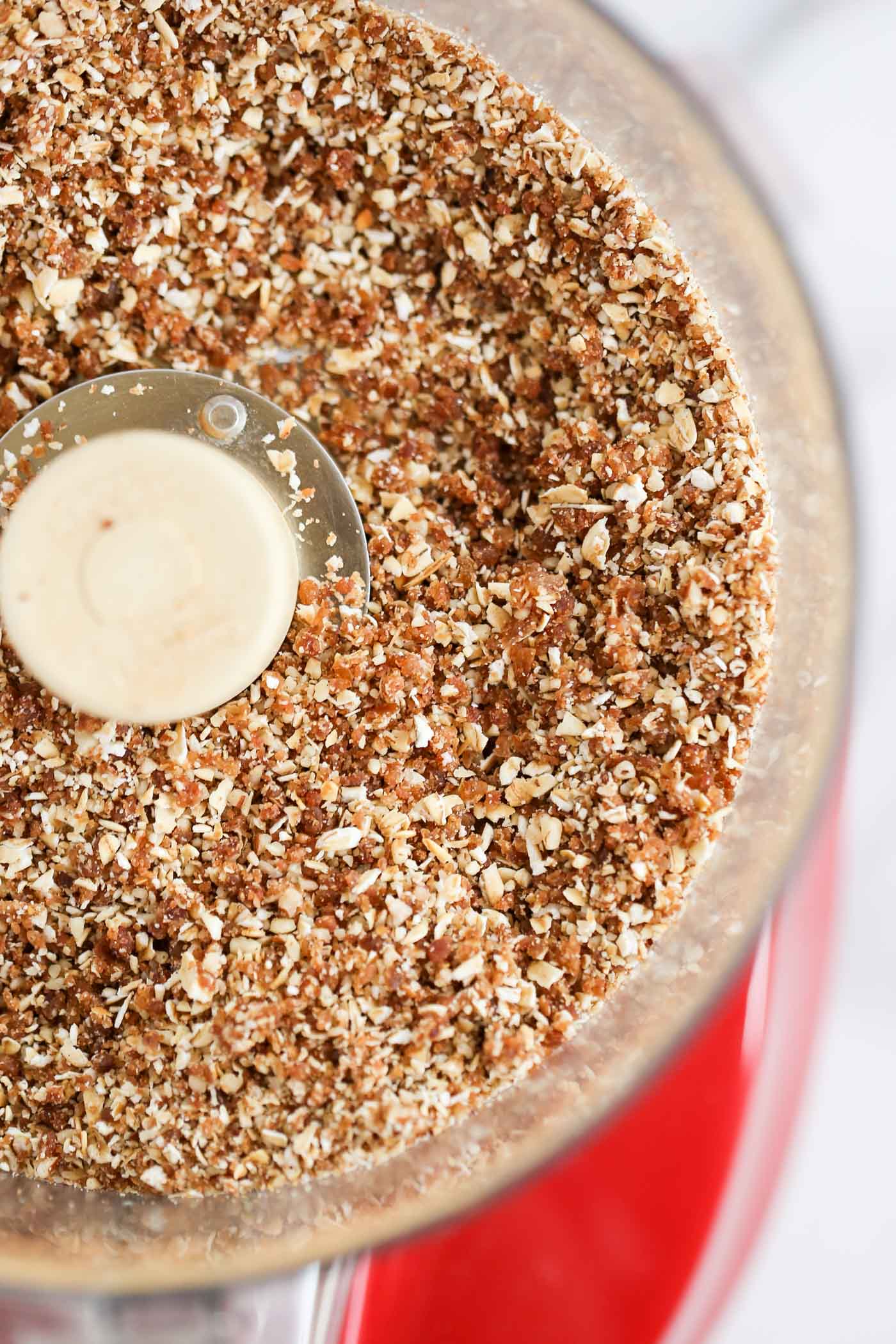 For the “crumble” portion, I wanted to give you something that had texture, some sweetness, but that was also nutritious. And I also didn't want to use oil, flour or any excessive sweeteners.

Instead, we're using just three ingredients: oats, pecans and dates. You whizz them up in your food processor until they're ground into a sandy texture and that's it. You get tons of fiber from the oats, healthy fat and a little protein from the pecans and natural sweetness from the dates. It's the perfect layer between the chia pudding and the peaches!

You'll also probably have a little extra, so I recommend saving it and sprinkling it on your smoothie bowl, morning yogurt or even atop a slice of almond butter toast. 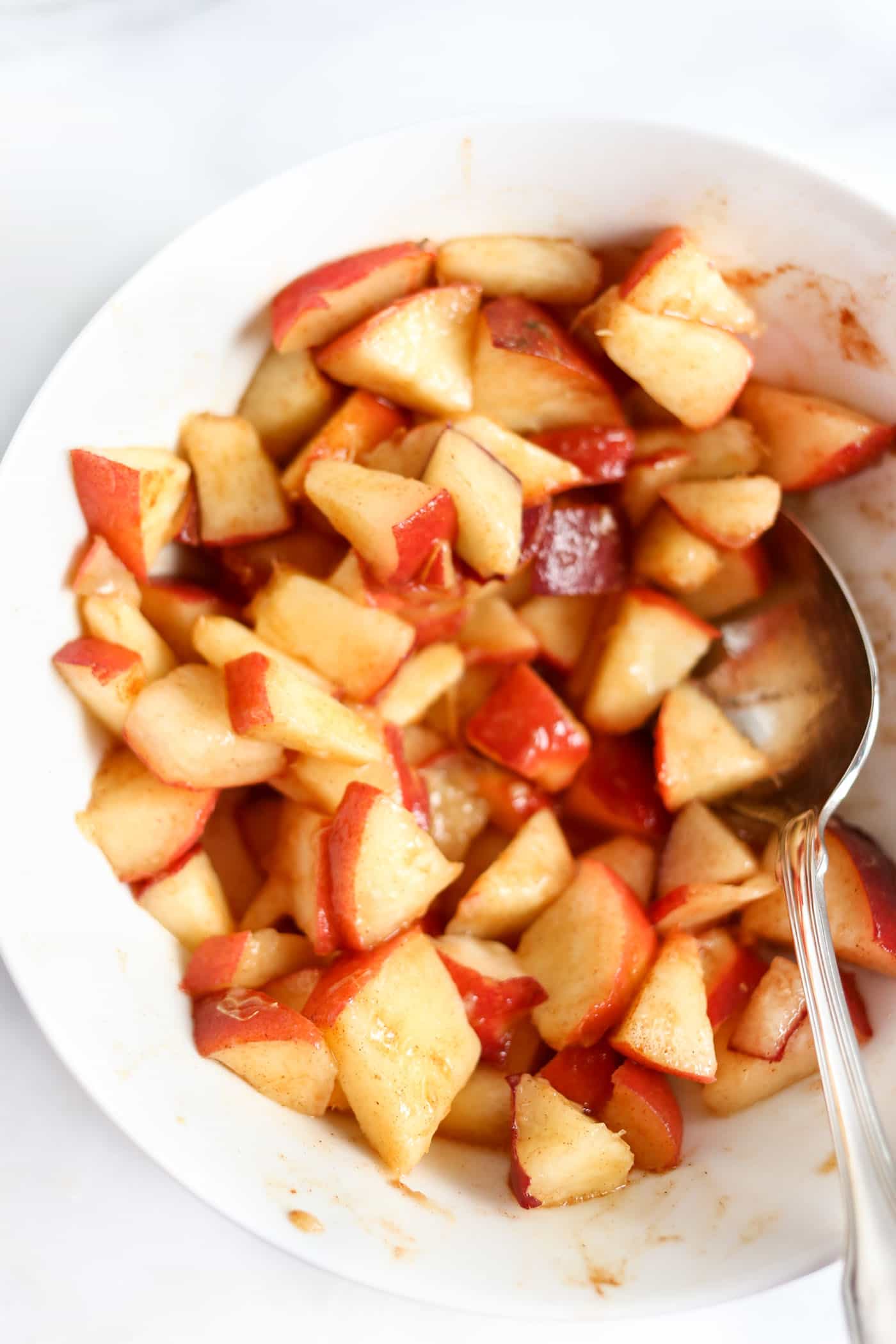 For the peaches? Just chopped peaches and cinnamon!

Because peaches are in season right now, they're totally sweet enough on their own. You don't need to add syrup or anything else. And I found if you let them marinate them for a little while in the fridge (or again overnight), they get even sweeter. 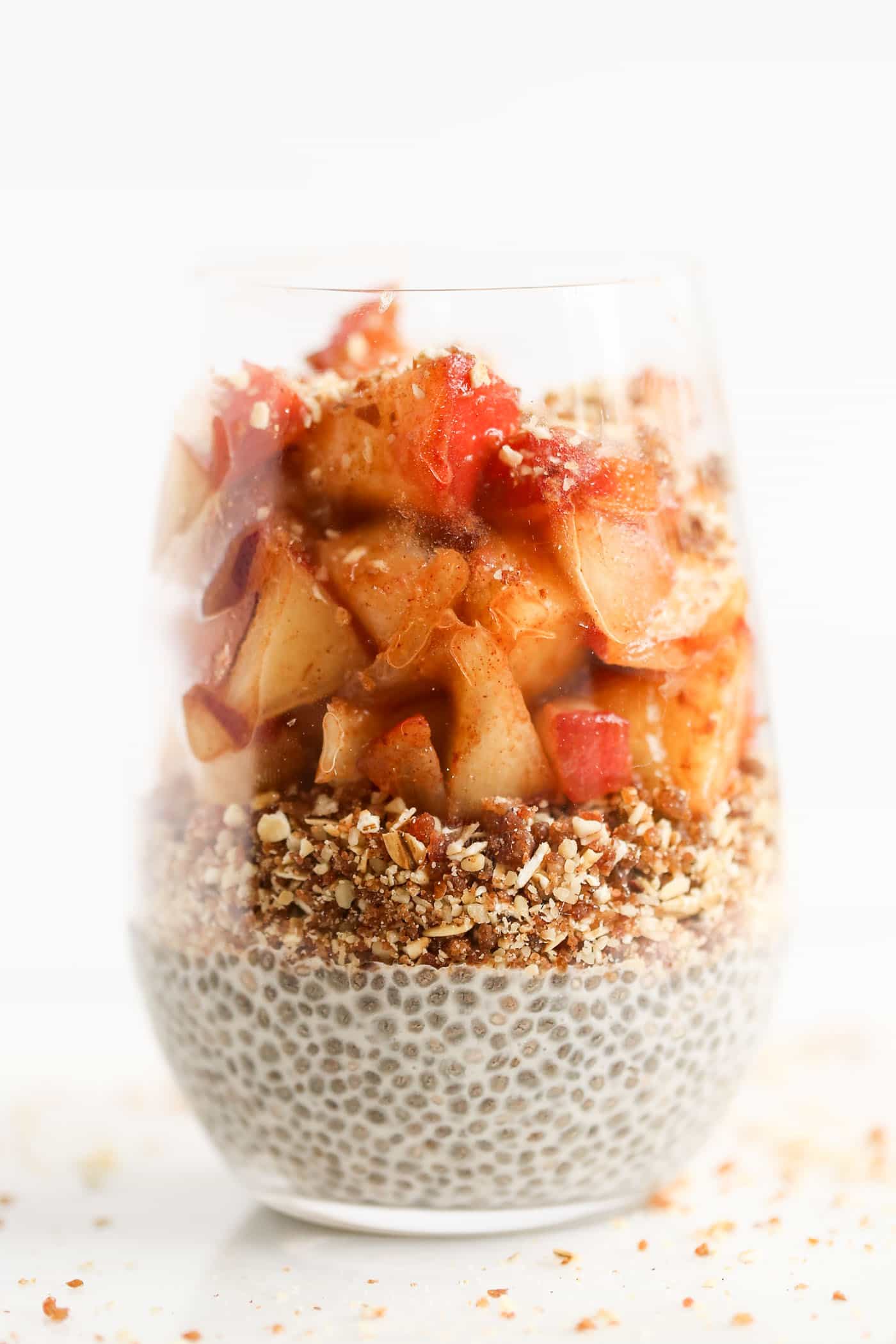 I have to admit, I was a bit worried it would get soggy in the fridge, but I let one of these sit in the fridge overnight (already assembled) and it was perfectly fine! The crumble was still crunchy, the chia pudding was still thick and the peaches were nice and juicy.

If you want to stretch this recipe to last you a few days, here's what I recommend: 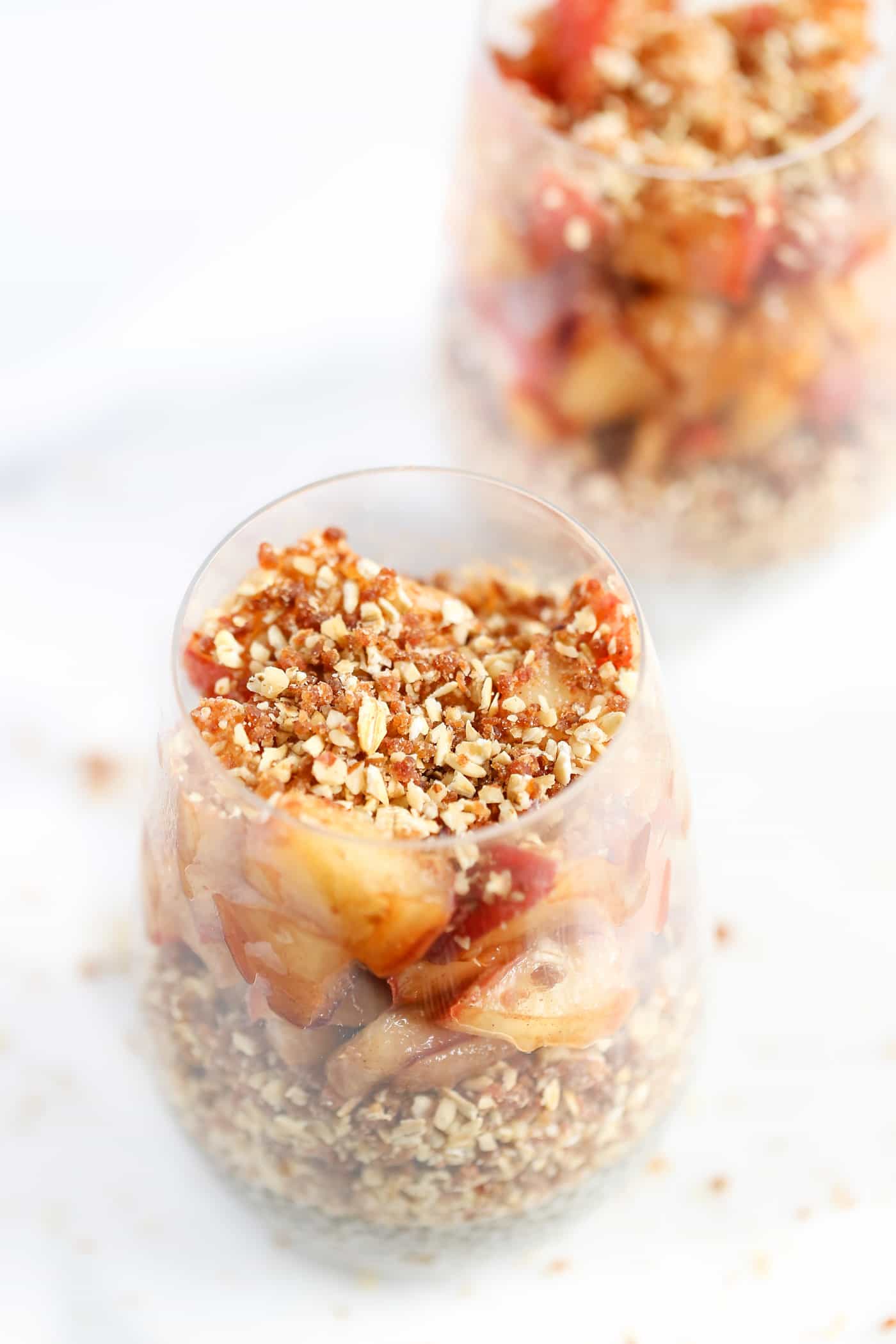 And you certainly don't have to eat it parfait style if that doesn't appeal to you 🙂 It would be just as delicious tossed in a bowl!

So let's recap why these peach pie breakfast parfaits make the perfect breakfast: 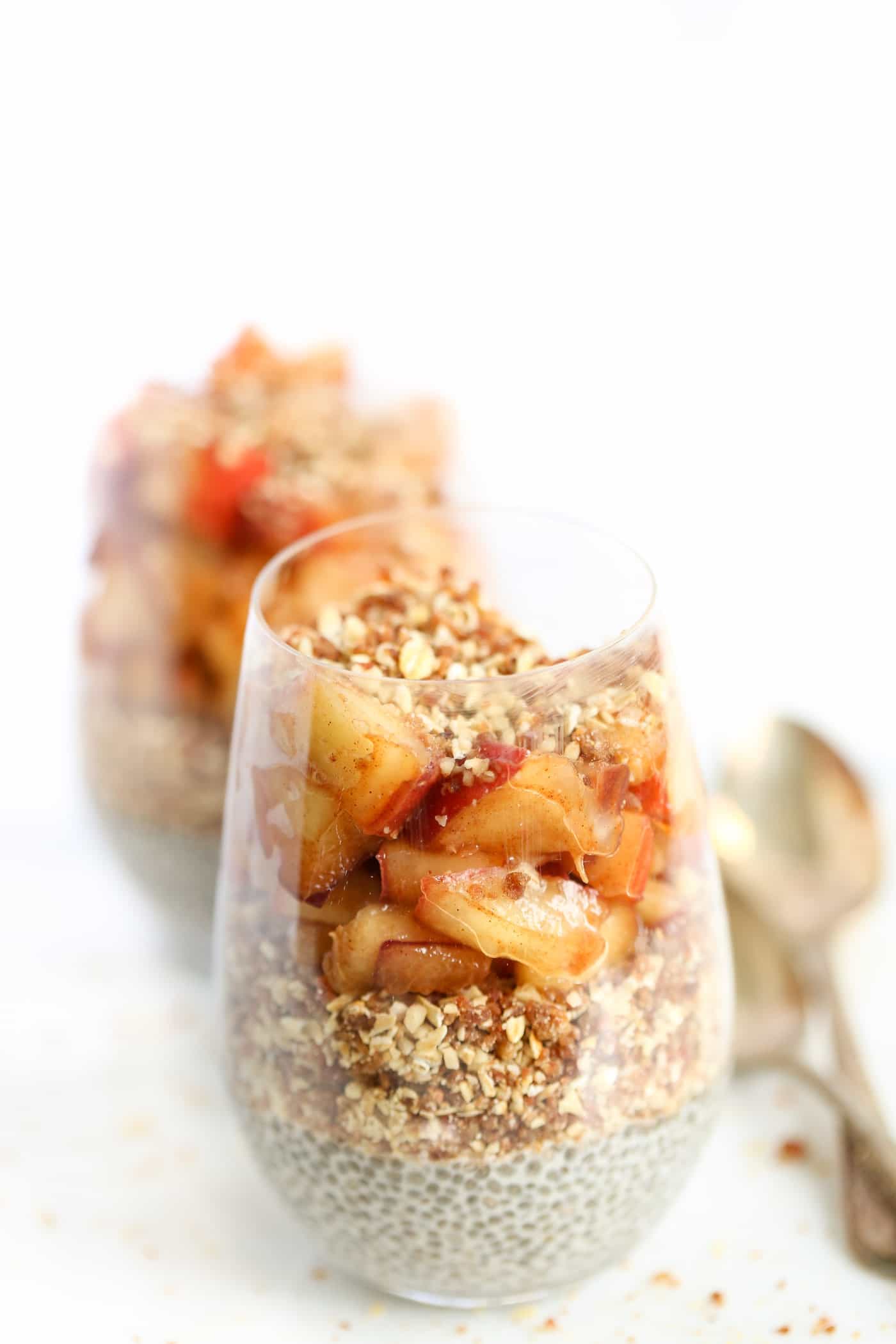 All in all I'd say it's a pretty epic way to kick off your day. You're going to love how easy they are to make and how much the remind you of a dessert. You can't go wrong with a breakfast that tastes like a slice of pie! 🙂

What's your favorite make-ahead breakfast? I'd love to get some ideas for an upcoming series I'm thinking about, so leave your faves in the comments below! And if you end up making this recipe, I'd love for you to share a picture on Instagram and tag @simplyquinoa or use #simplyquinoa so I can find your post and give you some love in return! 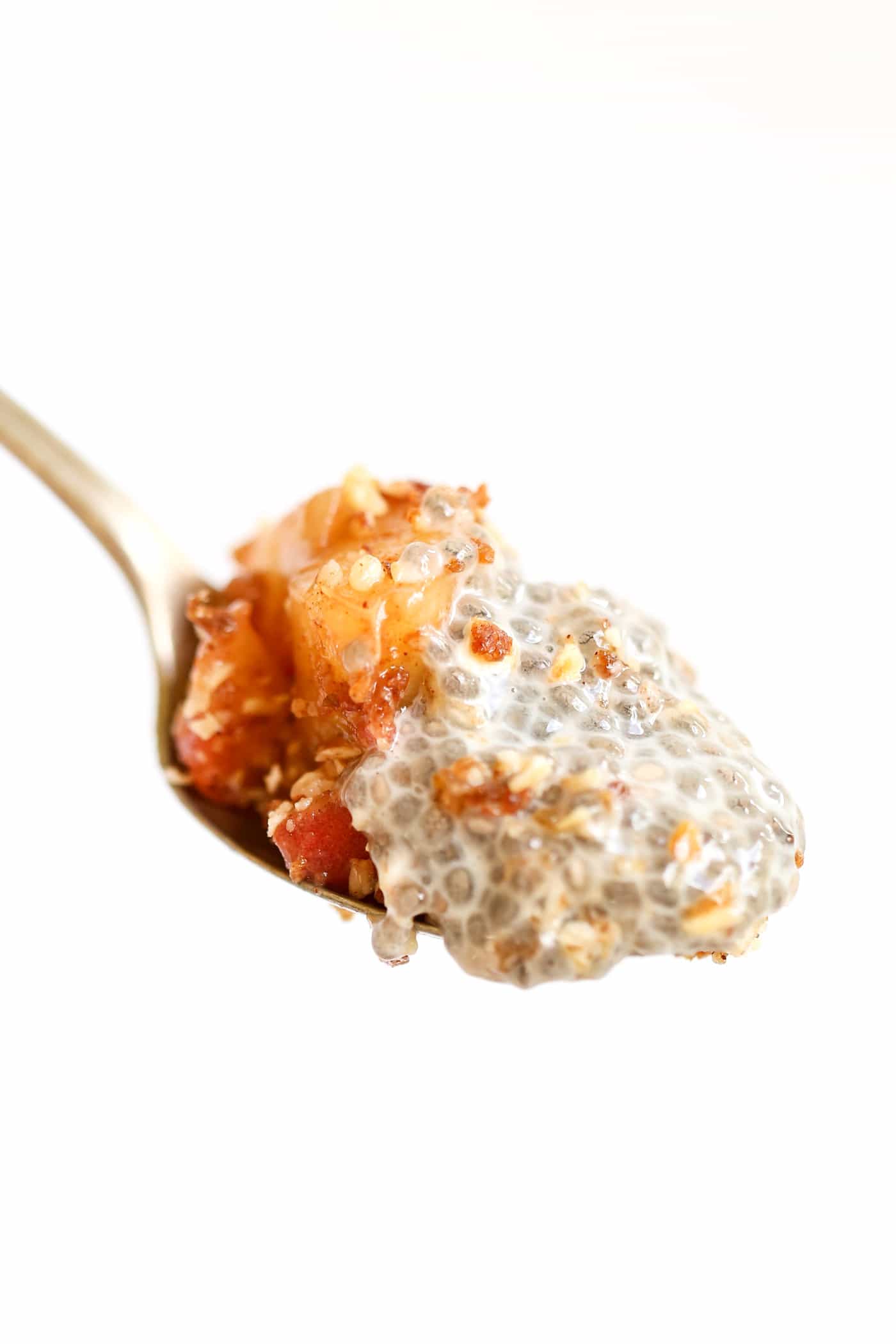 Today's Peach Pie Breakfast Parfait is a riff on one of my favorite desserts, but with a super healthy twist. We're going with a base of chia pudding, then an oat and date crumble, then cinnamon peaches to finish it off. It's summery, light and the perfect way to start your day.
Prep Time 10 minutes
Cook Time 5 minutes
Refrigerate 2 hours
Total Time 2 hours 15 minutes
Servings 2 Servings
Calories 561kcal
Print Pin 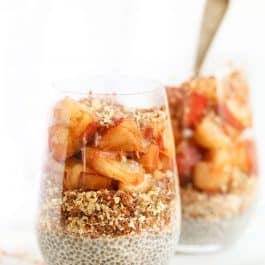 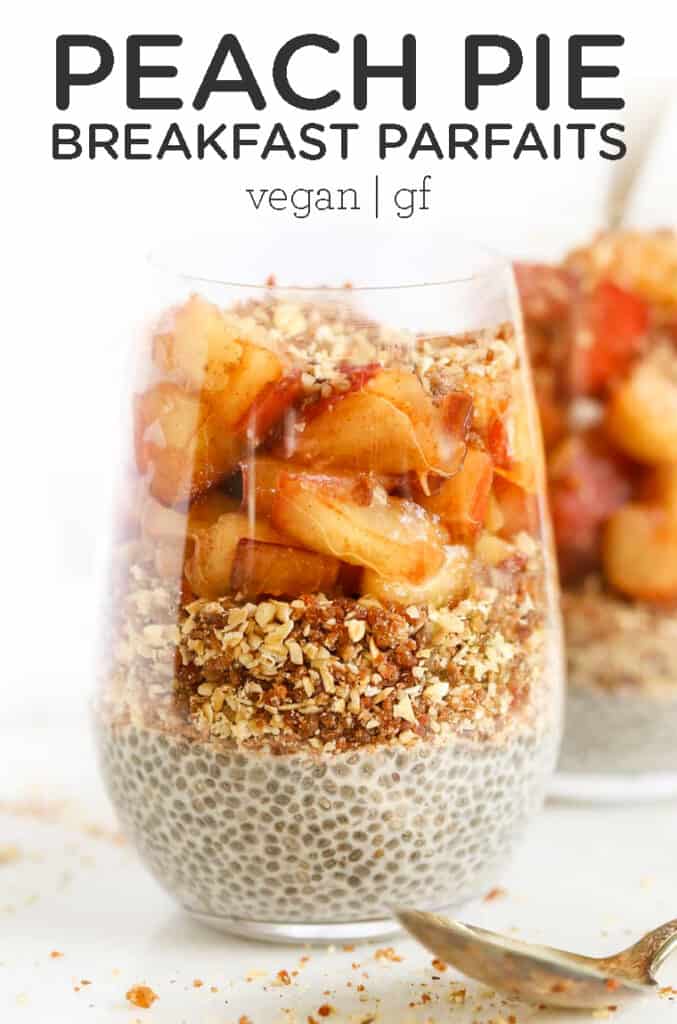