This vegan creamy broccoli soup is made with tons of veggies, has the most luxurious texture and tastes like it has cheese. Such an easy and healthy recipe!

As soon as the leaves start to turn, my mind immediately goes into soup mode. I love a good soup! Especially when it's silky smooth and topped with something I can mix in.

We have a constant debate in my house about creamy vs. broth-based soups and creamy wins out most of the time. Mostly because I'm the cook and I like creamy ????

Today we're whipping up my first creamy soup of the season and I think you're going to love it! We're making a Vegan Creamy Broccoli Soup that is made sans cream and sans cheese, but still absolutely scrumptious!

Initially, I wanted to call this a vegan broccoli cheese soup, but as I tasted I realized it was less cheesy and more just creamy broccoli, so that's what we're going with. To make it creamy, I have a few tricks up my sleeve. Two are traditional and one is a bit out there, but so tasty.

Here's what we're using to make this soup super creamy:

And don't worry, if you are a cheese lover who also happens to be vegan and/or dairy-free), we've got you. While this isn't necessarily a “cheesy” soup, we're adding a boatload of nutritional yeast which adds a cheesy flavor and amps up the protein content!

What Can I Use to Puree Soup?

Alright so now that we have our secrets to making a creamy vegan soup, let's talk tools. In order to make your soup creamy, you need to puree it. Pureeing soup is actually super simple, but you do need an appliance to do it.

Here's what you can use to puree soup:

1. Blender: this is my favorite method of pureeing soup since it has the best results and is the quickest. I use my Vitamix a3500, but any blender should work. Remember, depending on the size of your jar, you might need to blend in batches!

2. Immersion Blender: this is my next favorite method that also happens to be the cheapest. Immersion blenders do a great job pureeing soup, but they don't get it quite as smooth as a traditional blender. They also work better with soups that are on the thinner side (and I tend to like thicker soups). Either way, they will work with most soups. (*note: they won't work with this recipe because of the cashews)

3. Food Processor: a food processor can work to puree soups, but you won't get it nearly as smooth as you do with either blender. Food processors are really meant to chop things, so while your soup might still be creamy, it will also be slightly chunky at the same time. So basically…it works but it's not my favorite!

Otherwise, if you don't use one of these three tools, you might have a hard time getting that soup to be creamy!

How to Make Soup Puree (Safely)

Now that we've chosen our tools for making our soup, let me give you just a few safety tips. The last thing we want is to have a soup explosion in your kitchen or to burn yourself.

Basically, let it cool and use common sense to avoid getting burned or having a massive mess to clean up ????

And that's pretty much all you need to know before diving into this amazing recipe!

I love serving this vegan broccoli soup with some gluten-free toast and a little roasted broccoli on top. It's also fabulous with a drizzle of olive oil, a crack of fresh pepper and some red pepper flakes for a little heat!

This soup is also meal prep and freezer friendly! You can store it in a sealed glass container in your fridge for 3 – 4 days and can freeze it for up to 6 months. It's one of those recipes I love having a stockpile of so I can pull it out when I need something healthy and cozy! 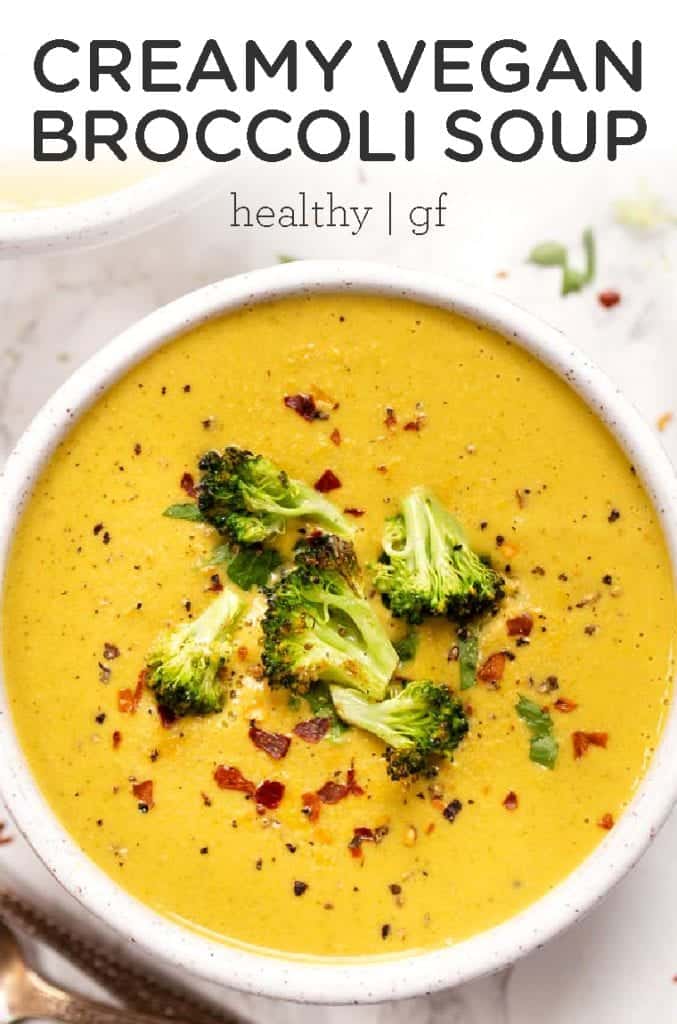 This vegan creamy broccoli soup is made with tons of veggies, has the most luxurious texture and tastes like it has cheese. Such an easy and healthy recipe!
Prep Time 10 minutes
Cook Time 40 minutes
Servings 6 servings
Calories 168kcal 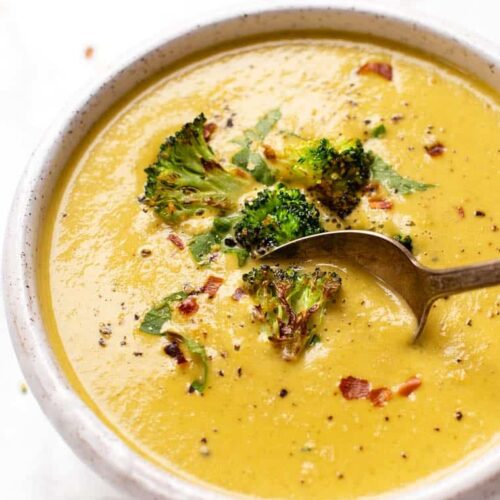