You're going to fall in love with this Mediterranean quinoa stuffed eggplant recipe! It's full of flavor, packed with veggies, and takes just 30 minutes to make!

I've been on a serious Mediterranean food kick lately. When I'm thinking about going out to eat, I pretty much only want Mediterranean/Turkish food. It's just so damn good. Just gimme all chickpeas, hummus, parsley, cucumber, and tahini. Like I'm actually it for dinner right now even though I ate these stuffed eggplants for lunch…

Thankfully we have a delicious restaurant just two blocks away that makes the most insane hummus and babganoush. It's seriously out of this world.

And ever since we ate there last weekend, eggplant has been on my brain.

So today we're going to make these baked eggplants stuffed with quinoa, tomatoes, and mushrooms. It's a really simple dish to put together, uses just a handful of ingredients (most of which I bet you already have!) and is ready in about 30 minutes. And makes a bomb ass dinner if you ask me! 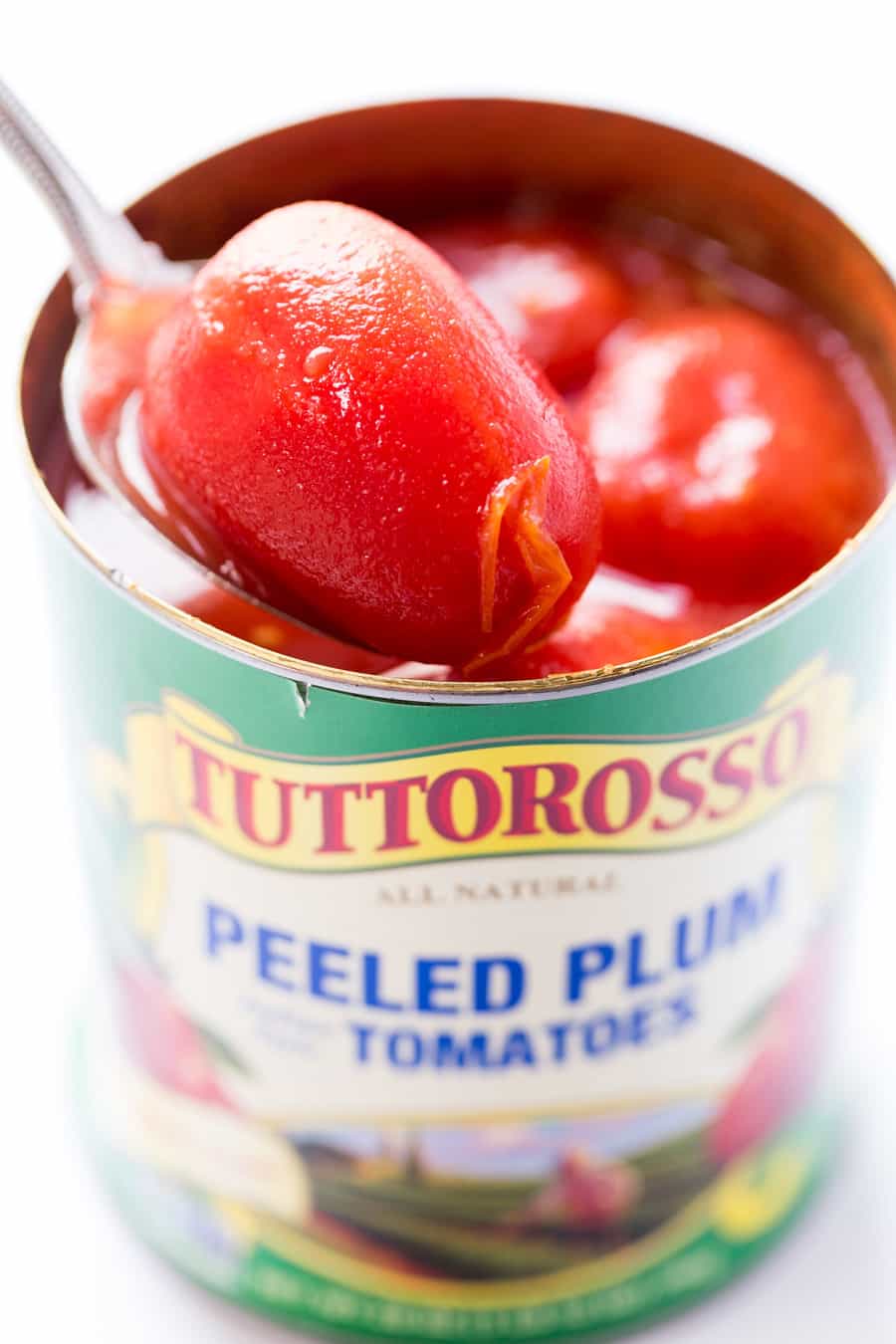 When you open up the can, you see whole tomatoes. Yes, that's what it says on the packaging, so that's what you'd expect, right? Well, you'd be surprised at some of the other brands.

If you remember when I visited their factory last year, we actually tested their whole tomatoes against 10 of the main competitors and Tuttorosso's were the only ones that were still whole and intact.

Because they're whole, you can actually chop them up just like you would a fresh tomato. And since they're packed at the height of ripeness, they end up being way more flavorful. PLUS! (sheesh, so many good things to say) Canned tomatoes are already cooked, so using them in this recipe majorly speeds up the cooking time. 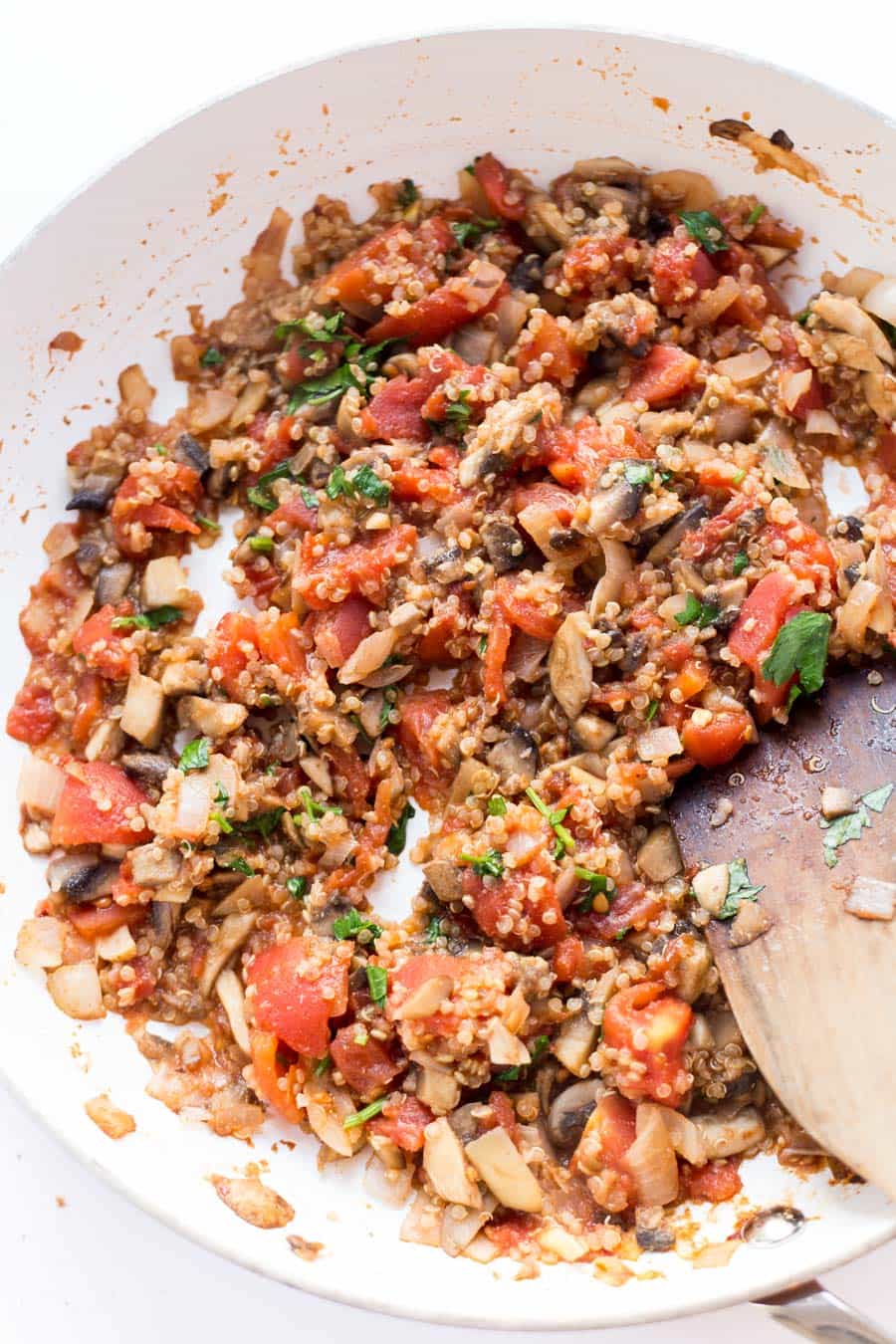 Our stuffing is a simple blend of quinoa, tomatoes, finely chopped mushrooms (which aren't technically Mediterranean but give a nice meaty texture to the recipe), shallots, garlic, and a few spices, that gets sauteed in some olive oil until it's sizzling hot.

Then just scoop it into the soft eggplant, bake for another few minutes and that's pretty much it! 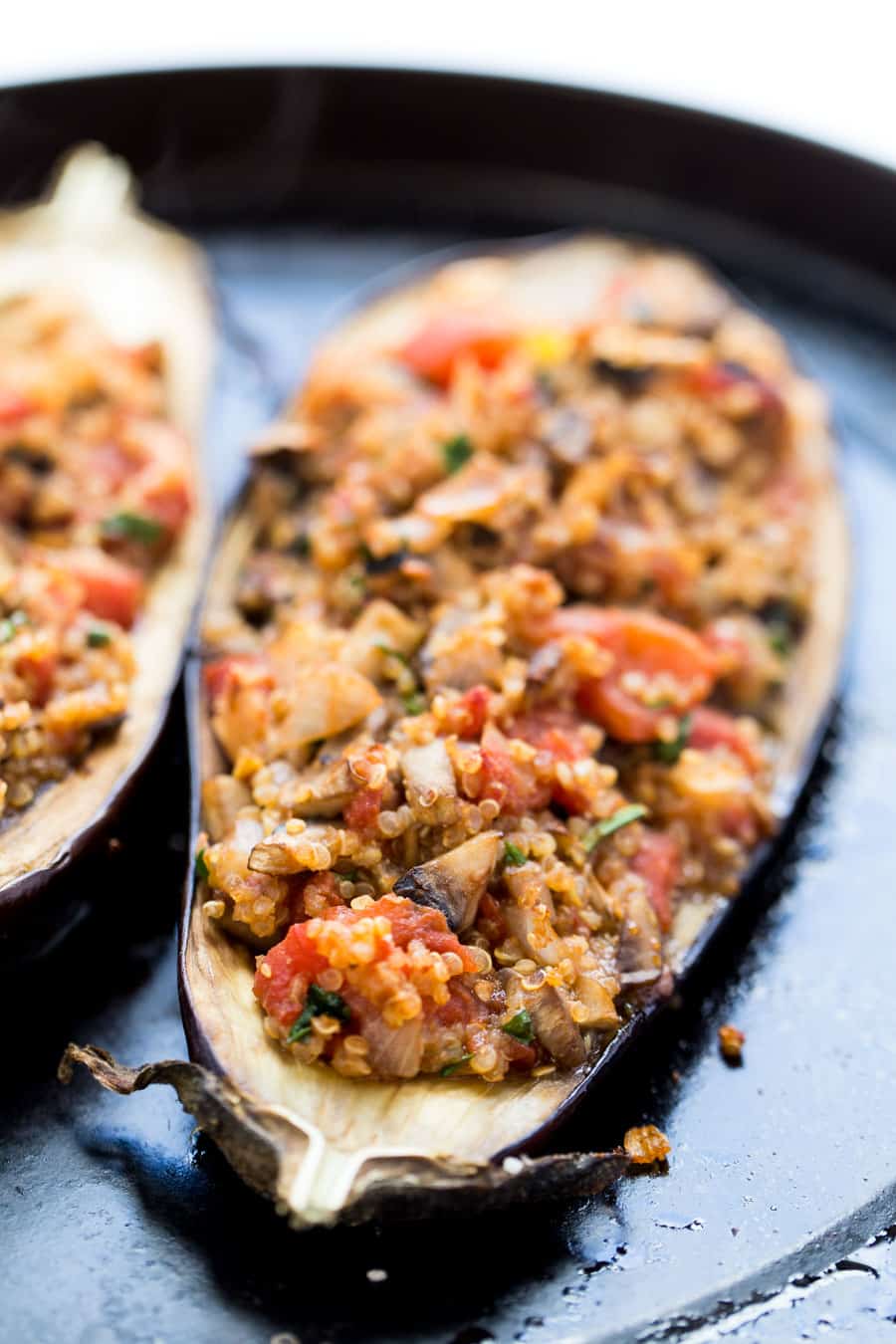 It's my favorite way to make salad dressings (check out my Tahini Dressing: 4 Ways post for some inspo), I add it to my creamy caesar dressing, make energy balls with it and sometimes just drizzle it on avocado toast!

For our quinoa stuffed eggplants, we're making a quick tahini drizzle with lemon juice, garlic powder and a pinch of salt. You'll want to make sure to also add a little water in there so that it gets nice and creamy! 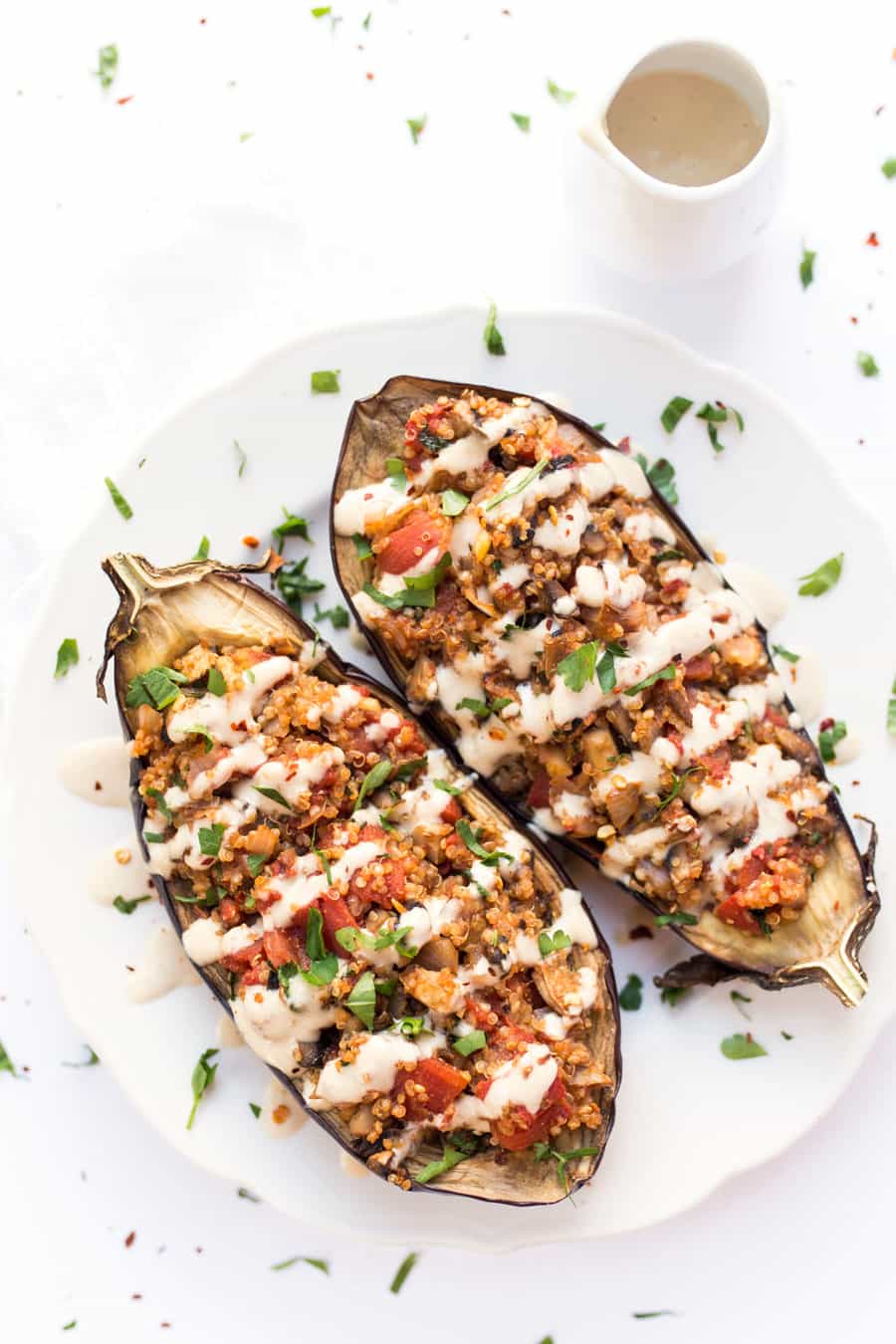 If you've been on the hunt for a meal that's light, easy to make, and yet still totally satisfying, this stuffed eggplant is for you! It also stores well in the fridge and can be reheated as leftovers the next day!

What's your favorite Mediterranean meal? I'm looking for more recipes to try, so let me know your picks in the comments below! And if you end up making this recipe, I'd love for you to snap a pic and tag @simplyquinoa on Instagram! Absolutely LOVE seeing your creations ???? 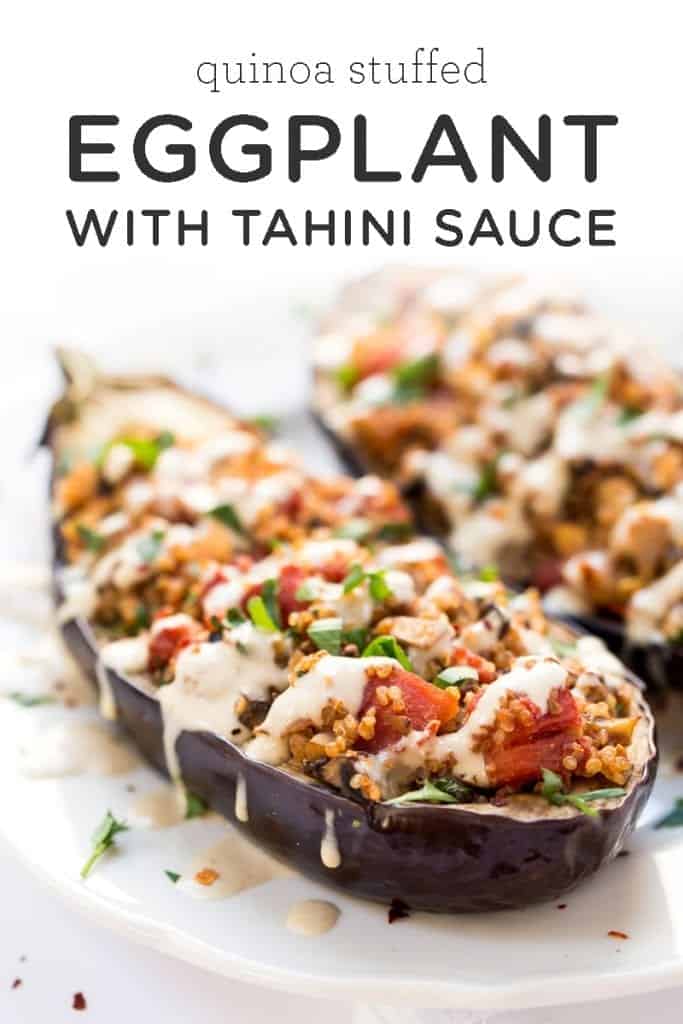 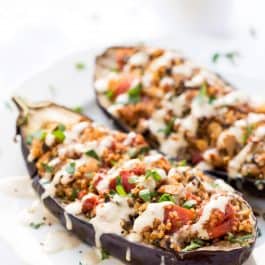 This recipe is brought to you in partnership with Tuttorosso Tomatoes. As always, all opinions are my own. I only share companies I love and trust, so thank you for continuing to support Simply Quinoa!