A healthy spin on this Korean staple, this quinoa bibimbap, made with fluffy quinoa, steamed vegetables and a fried egg, is a great alternative to takeout! 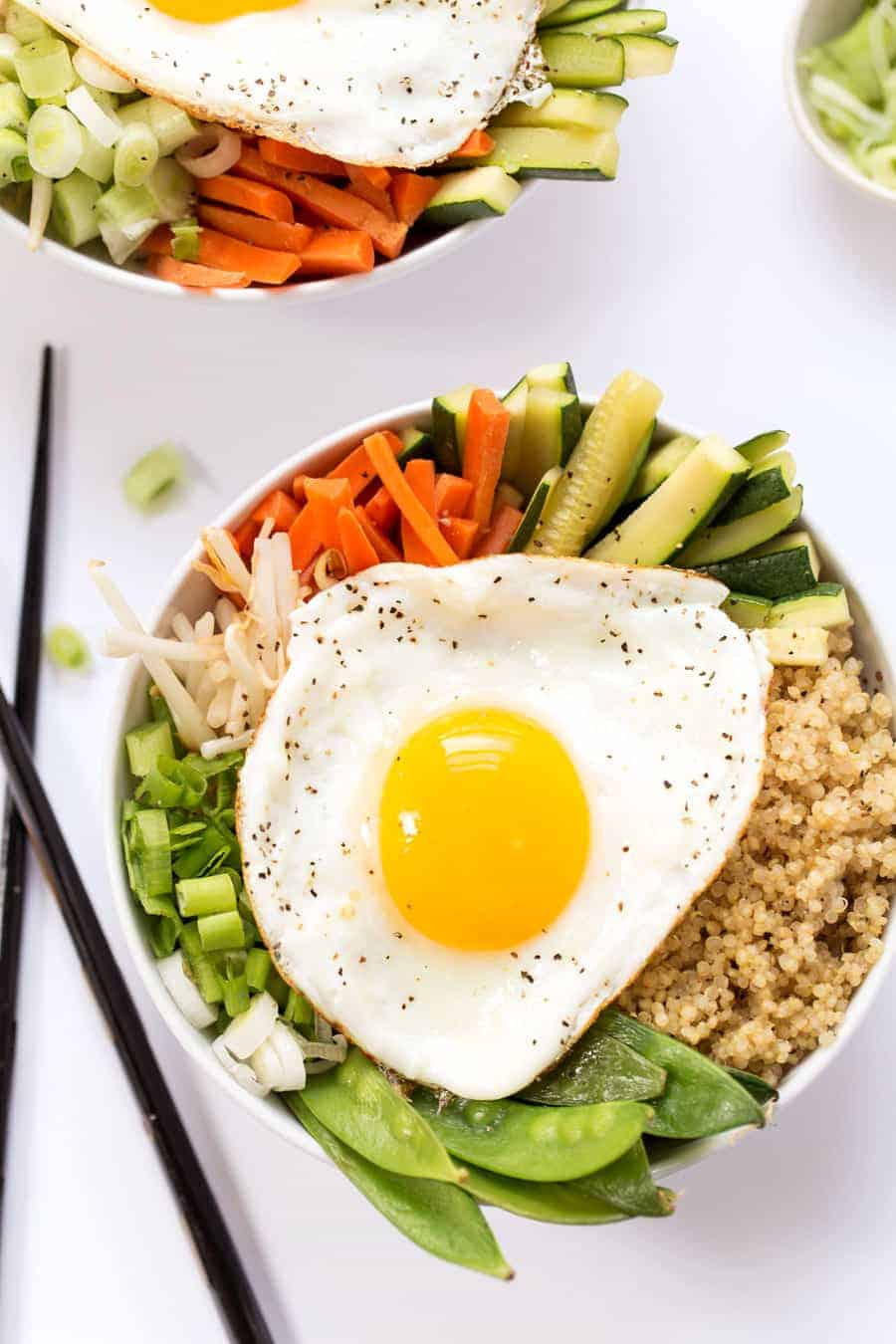 We love Asian-inspired dishes in our house and often order them for takeout, but what we love most is remaking these dishes into healthy, nutrient-dense meals. Which is exactly where quinoa comes into play!

With rice being the primary grain used in most Asian cooking, I almost always just swap the rice for more nutritious quinoa. So far we've made quinoa sushi, quinoa fried “rice” and even quinoa stir fry.

Today we're remaking this Korean classic, bibimbap, using quinoa, steamed veggies and a simple combination of sauces. It's protein-packed, easy on the digestion and super flavorful too! 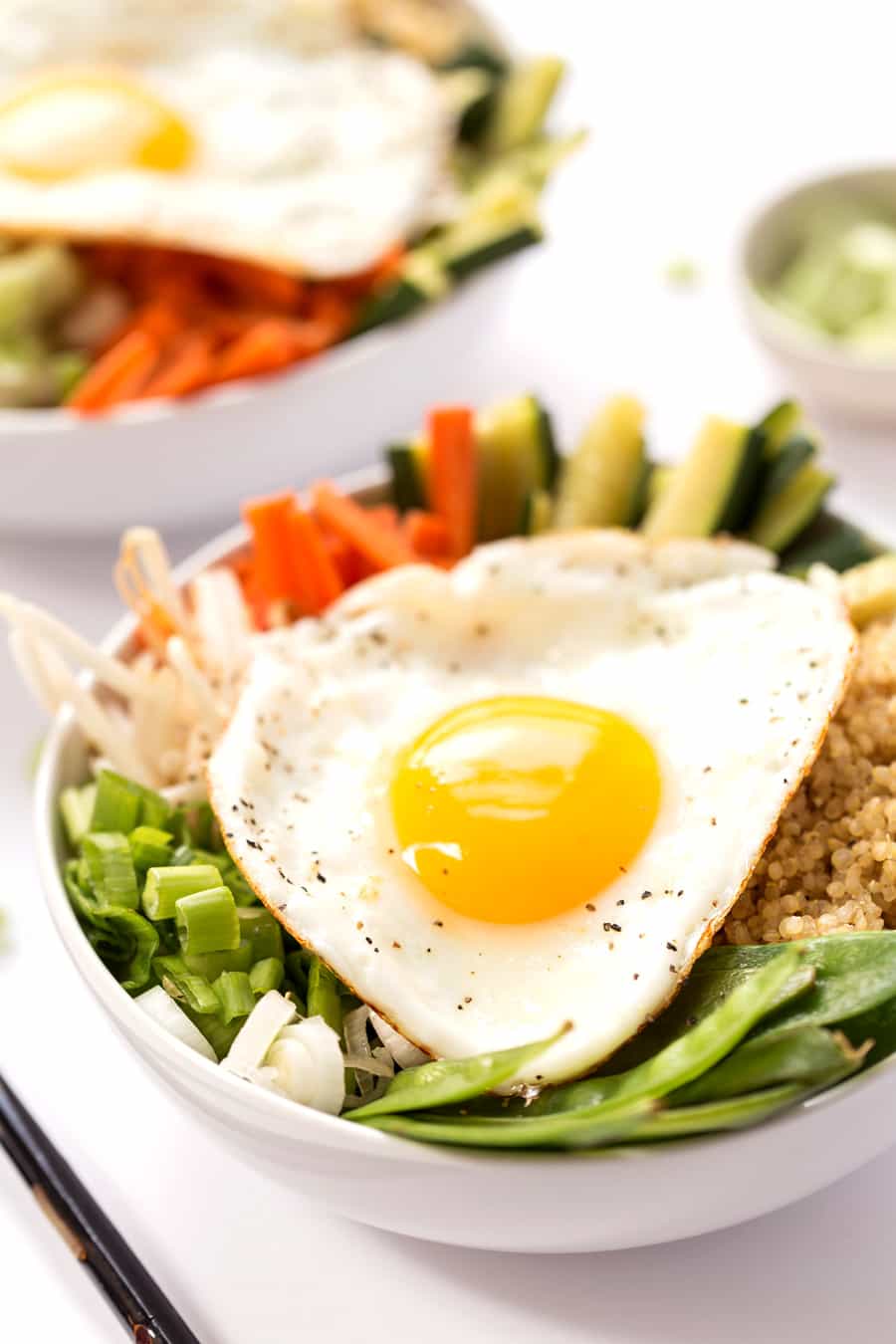 Bibimbap originated in South Korea but has quickly risen in popularity around the world. In 2011 it was actually ranked 40 in CNN Travel's poll of the 50 most delicious foods. And for good reason. Bibimbap has everything you could want.

We start with a base of fluffy quinoa (traditionally white rice), then top it with an assortment of steamed or sauteed veggies, some soy sauce, chili paste and a fried egg. It's delicious, fun to eat, budget-friendly and super simple to make. 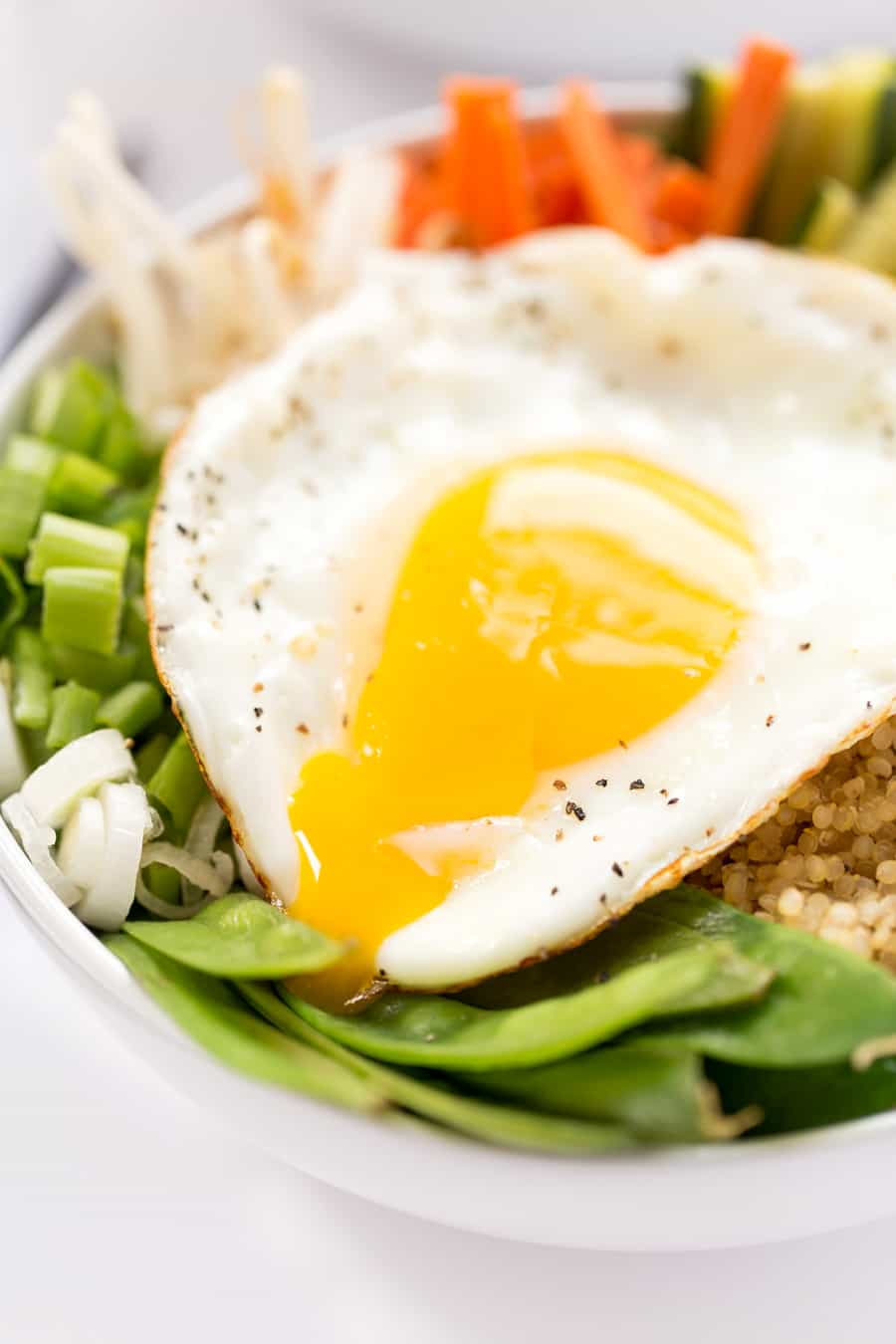 For my version, I decided to keep things as light as possible and steam my veggies instead of sauteeing them. By gently steaming them, we're able to retain most of the nutrients while also making them easier to digest.

My veggie blend was carrots, zucchini and snow peas, but you could use whatever veggies you have in your fridge. Bell peppers, broccoli and/or cauliflower and mushrooms would all be scrumptious!

And the best part of all?  This baby can be whipped up in just about 15 minutes! Talk about the perfect weeknight meal! 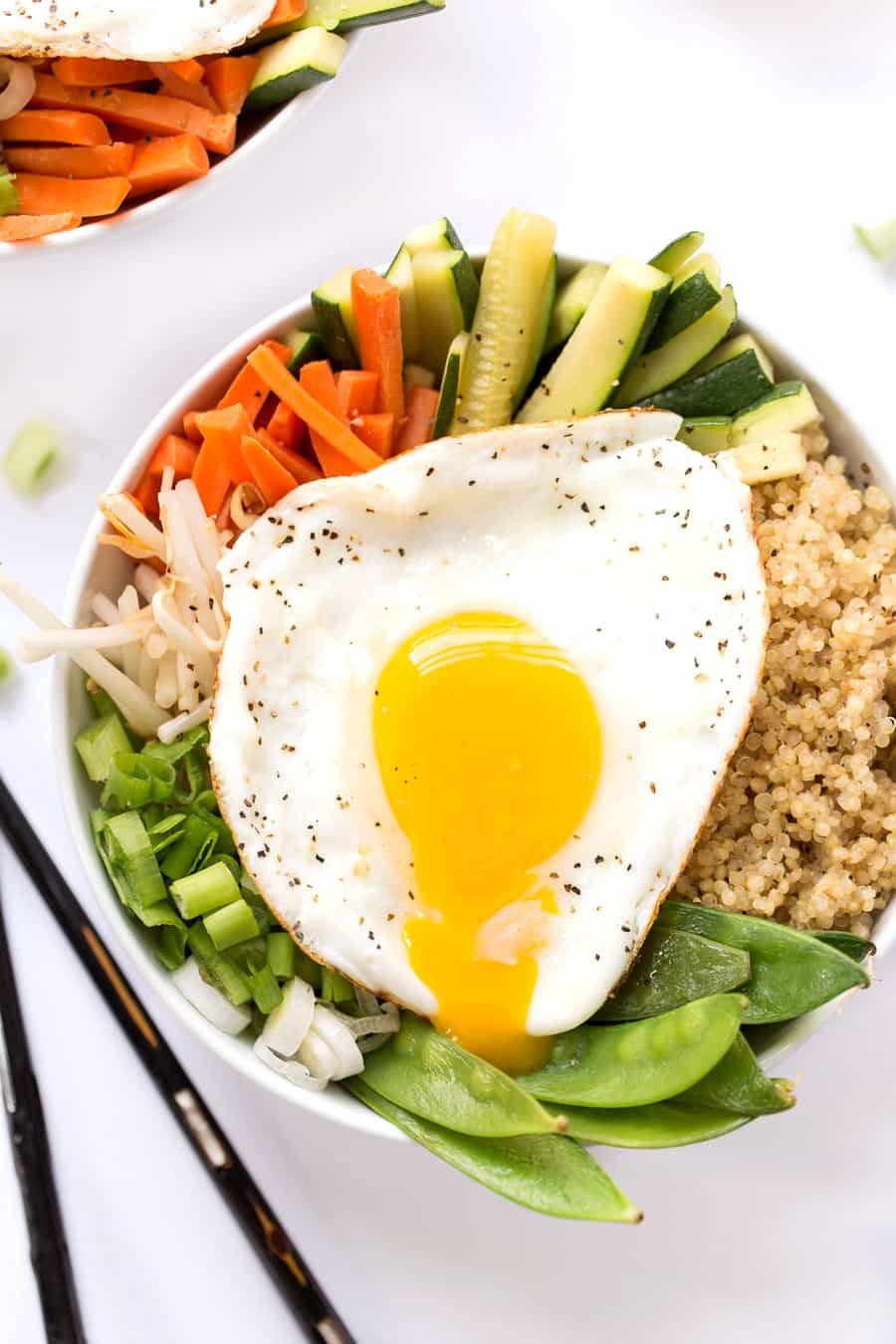 If you're a takeout queen like me, I challenge you to try whipping up this quinoa bibimbap next time the takeout urge strikes. Even if you don't feel like cooking, once you sit down to eat a bowl of this deliciousness, you'll be so glad you did.

The flavors, the veggies, the fluffy quinoa and the ooey-gooey fried egg on top? It's heavenly! 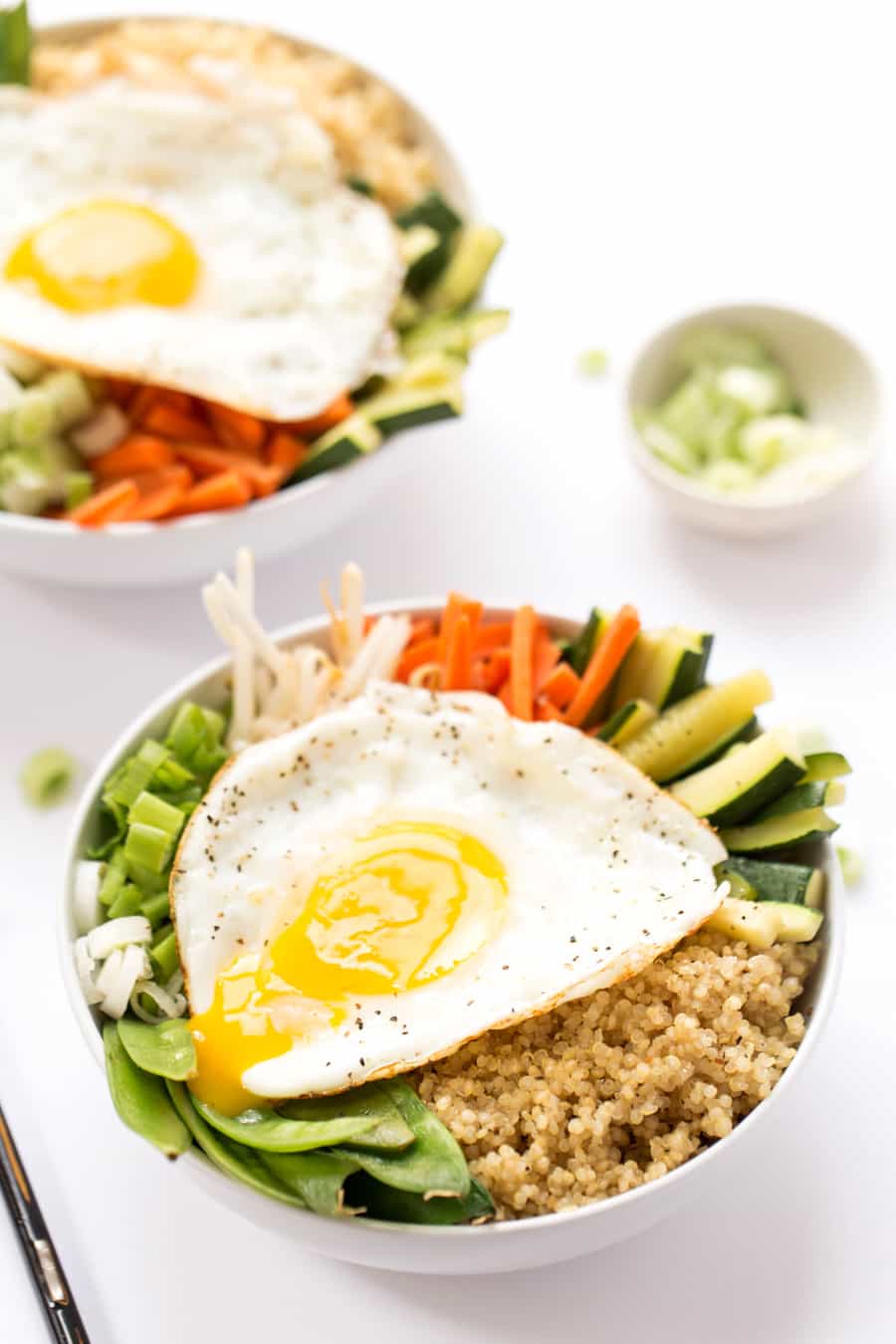 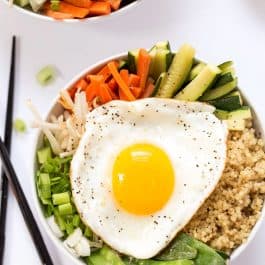